The Dulwich Picture Gallery., London presents a wonderful new exhibition of works by Vanessa Bell (1879-1961), one of the central figures of the influential and much-admired Bloomsbury Group; writers, intellectuals, philosophers and artists. 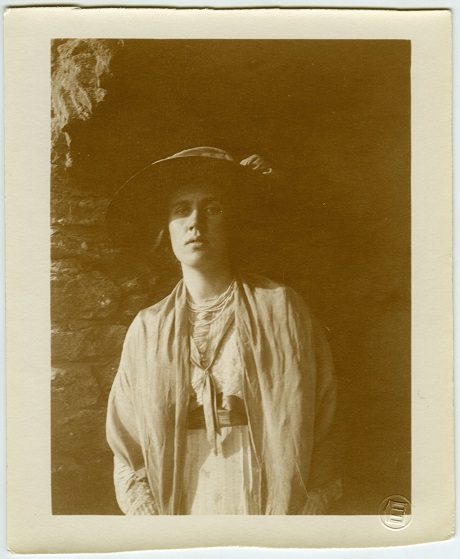 This exhibition, comprising over 100 oil paintings as well as ceramics, fabrics, works on paper and photographs, seeks to highlight the beauty and ingenuity of her work, illustrating her radical and forward-thinking approach to art.

This is the first major retrospective of Vanessa Bell’s work, and reveals some of her preferred genres: portraiture, still life and landscapes, with a focus on one of her most distinct experimental periods, during the 1910s.

She moved effortlessly between fine and applied arts, boldly experimenting with abstraction, form and colour as she developed her style and way of interpreting the world. After initially training in Impressionism, Bell broadened to a more radical style influenced by visits to Paris, and by post-Impressionist exhibitions in London in 1910 and 1912 as well as fellow members of the Bloomsbury Set. Her radical approach to life, a lifestyle favoured by a number of the Bloomsbury Group, accompanied her avant-garde approach to art.

The Bloomsbury Group began in 1905 in the sitting room of the flat inhabited by Bell and her siblings in Gordon Square, Bloomsbury in central London. A number of artists, writers and intellectuals began meeting on Thursday and Friday evenings including writer and critic Lytton Strachey, writer E.M. Forster, economist John Maynard Keynes, post-Impressionist painter Duncan Grant, as well as the inimitable Virginia Woolf, writer, and Vanessa herself. Art critic Clive Bell, who was to become Vanessa’s husband in 1907, was also regularly in attendance. The group shared the ideal that the pursuit of pleasure was vital, as was the creation and enjoyment of aesthetic experience. They reacted against the conventions of Victorian life, seeking to find new ways of living not constricted by the rules and morals of yesterday. Their lives and their art often overlapped, as did their relationships. Friends were often lovers, and open marriages were common, as were relationships with both men and women. Vanessa and her husband Clive both took lovers at times, and it was Vanessa and her paramour Duncan Grant who lived together at Charleston, the country house in East Sussex which was to become the centre of the Bloomsbury Group after 1916. The works on display in this exhibition draw on Bell’s uncommon experiences, of questioning the establishment and choosing an alternative way. She is considered to have pioneered new forms of art in England, being one of the first to experience with abstraction in 1914, and she also sought to convey meaning and emotion through ‘significant form’, a term coined by her husband, Clive Bell, to describe the arrangement of shape, line and colour to capture the sensations and emotions of the human experience. As Sarah Milroy, curator of the exhibition, explains the ethos behind the exhibition, “Unconventional in her approach to both art and life, Bell’s art embodies many of the progressive ideas that we still are grappling with today, expressing new ideas about gender roles, sexuality, personal freedom, pacifism, social and class mores and the open embrace of non-British cultures. This is the perfect moment in which to re-evaluate Bloomsbury, and Bell’s legacy within it, and we look forward to affirming her importance to a contemporary audience. To complement the exhibition, Legacy: Photographs by Vanessa Bell and Patti Smith is also on display at the Dulwich Picture Gallery.

This lovely little exhibition shows a variety of Bell’s photo albums of her friends and family taken at her beloved country home, Charleston.

Alongside these images are photographs taken by legendary American musician Patti Smith, of Charleston today.

Smith has beautifully captured the lingering remnants of Bell’s life, through images showing fragments of the house – a bed, a bookshelf – taken during her 2003 residency at the house. Dulwich Picture Gallery in the Springtime. Image courtesy of the gallery.

Dulwich Picture Gallery. is located close to one of London’s best kept secrets, Dulwich Village, a picturesque, almost bucolic little hamlet in amongst the neighbourhoods of south London. The Gallery was designed by Regency architect Sir John Soane, and first opened in 1817, making it the oldest purpose-built public art gallery in England. The enfilade of the Dulwich Picture Gallery displaying Old Masters artworks. Image courtesy of the gallery.

The Gallery houses one of the finest collection in the United Kingdom of Old Masters paintings, with highlights including French, Italian and Spanish Baroque paintings and British portraits from Tudor times to the 19th century. 1908 Visitor book for Dulwich Picture Gallery, including the signatures of Vanessa and Clive Bell, and Virginia Woolf (nee Stephen)

The Gallery celebrates its bicentennial in 2017, with a number of special exhibitions commemorating this momentous anniversary, including The First Visitors, on display from 14 March – 4 June 2017. The First Visitors includes the very first handbook of gallery rules and guidelines, as well as a visitors’ book from 1908 containing the signatures of Vanessa Bell and her husband, Clive, as well as her sister Virginia Woolf (nee Stephen). Writer Lady Mary Wortley Montague (1689-1762) was one of the so-called Augustan age in England’s most colourful adventuresses, an interesting woman of influence