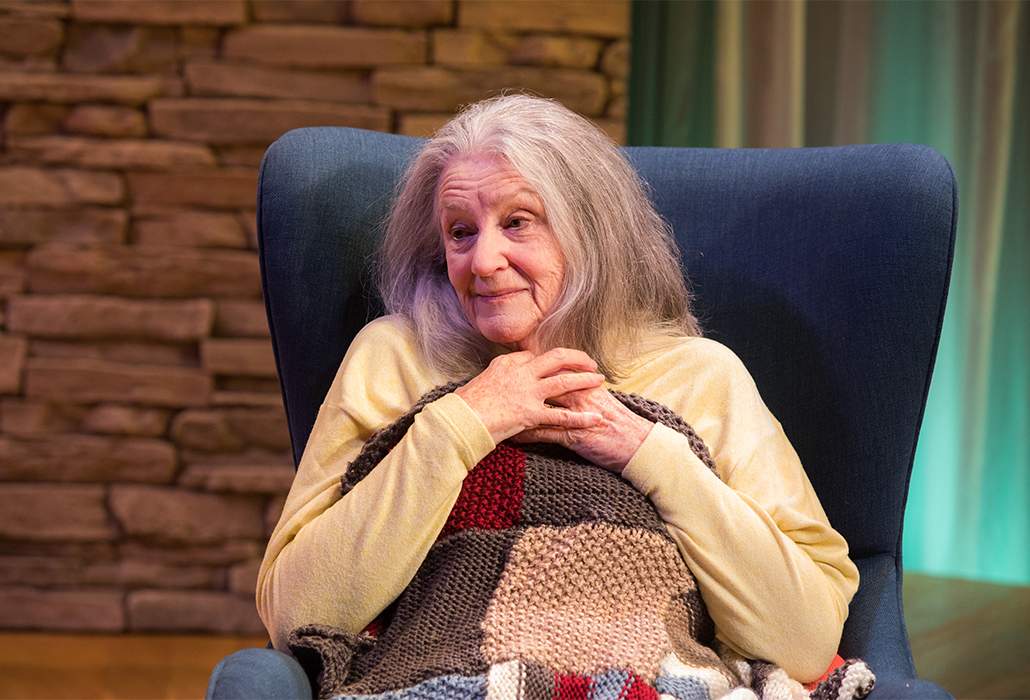 The elegant simplicity, perceptive intelligence and imaginative construction of this literary gem are beautifully celebrated in the production of Marjorie Prime at the Ensemble Theatre at Kirribilli in Sydney.

Life, memories, death collide in this poignant ingenious play by Jordan Harrison that resonates with truth, humanity and intense emotion. Justifiably, it was nominated for the Pulitzer Prize in 2015 and became an acclaimed Off Broadway sensation. The gentle pace and enduring composition of the play bellies the complexity within.

The action meanders along like a brook gently ebbing and flowing and then without noticing it merges into an ocean of turbulent currents. There are so many themes beautifully crafted into the dialogue of this layered masterpiece. Questions, connections and revelations lingered and evolved long after the performance was over. 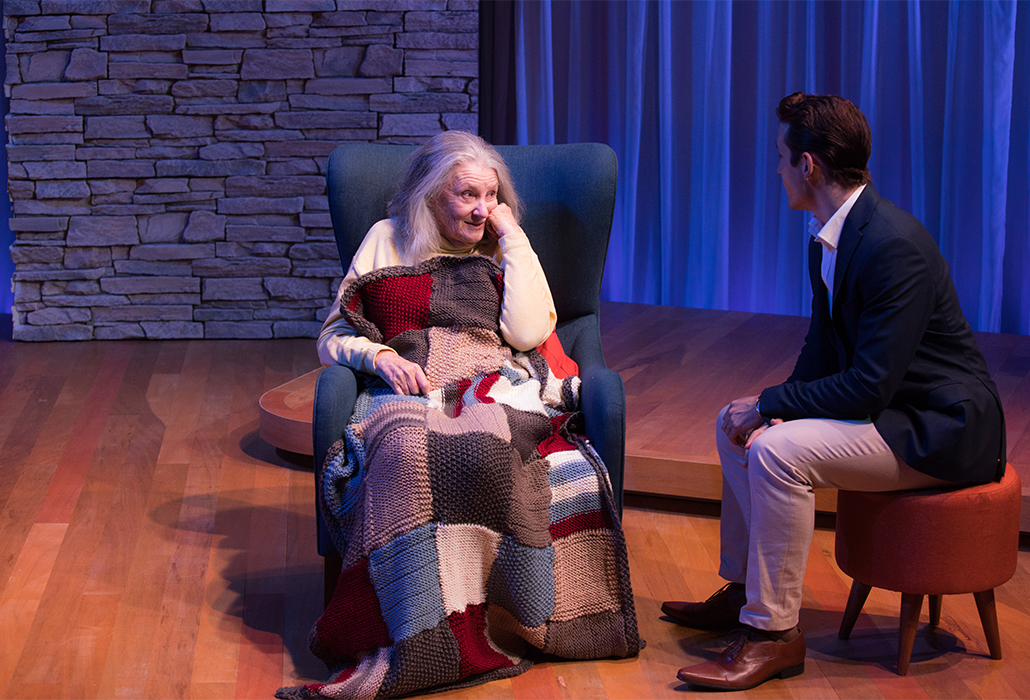 As the play opens Marjorie the eighty five year old mother of Tess and widow of Walter shuffles, sits and begins talking companionable to Walter, a Prime (three dimensional pixel form of her former handsome husband at 35 years of age). Walter tells Marjorie stories about the past that have been programmed and absorbed by him from other sources in particular Jon, Tess’s husband.

Marjorie was a violinist and a section of Vivaldi’s Four Seasons is integrated in the play along with a score by composer Max Lyandvert, adding a piercing nostalgia and triggering wistful longing.

At times Marjorie is mischievous and flirtatious as the stories unravel, but Tess is uncomfortable with the pretence. Tess’s husband, Jon is honourable and compassionate in his intentions. He is desperate to open up real communication between mother and daughter, to expose the lurking truths that lay unresolved.

Devastating events haunt the family and punish the living. 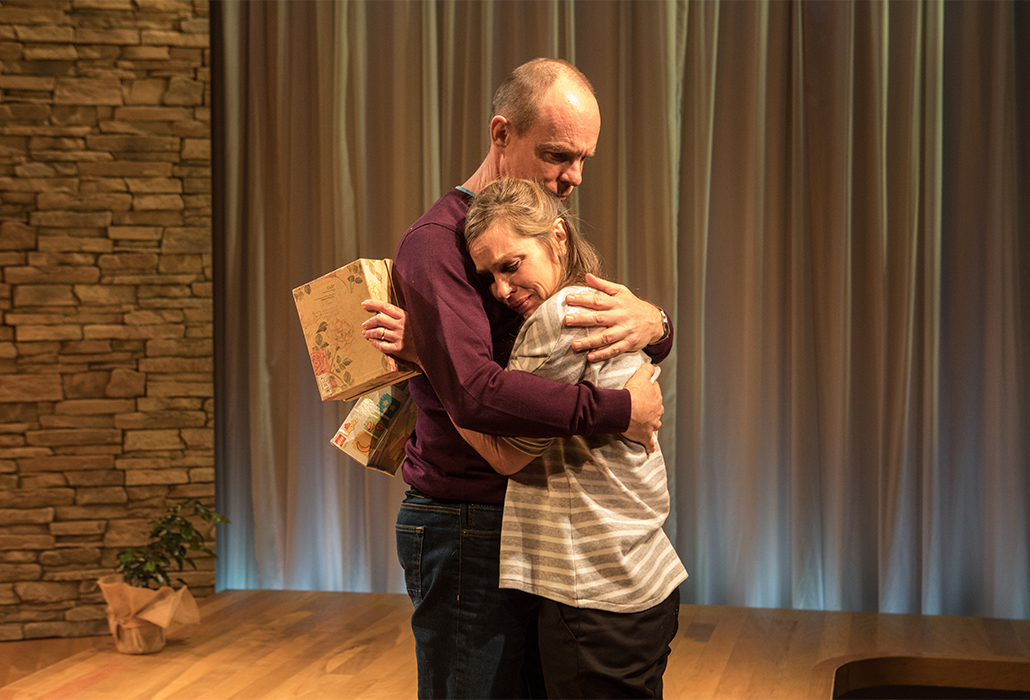 Tess’s equilibrium is always compromised by guilt and remorse. Jon, her loving, loyal and compassionate husband tries desperately to comfort and purge his distraught wife’s conflict. His love is a glowing beam of promise and his resilience, determination and patience is adhered to with an unassuming conviction.

Marjorie’s memory lapses and confusion is the face of her growing dementia but is tenderly balanced by her sense of humour. Her ego and perception of romance are touchingly addressed by the repeated references to the exaggerated story of a tennis pro’s unrequited love for her.

In the second part of the play, other Primes add details and sequences to the previous anecdotes. Emerging declarations and specific aspects of the past articulate the painful truths and critical causes that impact dramatically on the actions and emotions in this exquisitely assembled play. 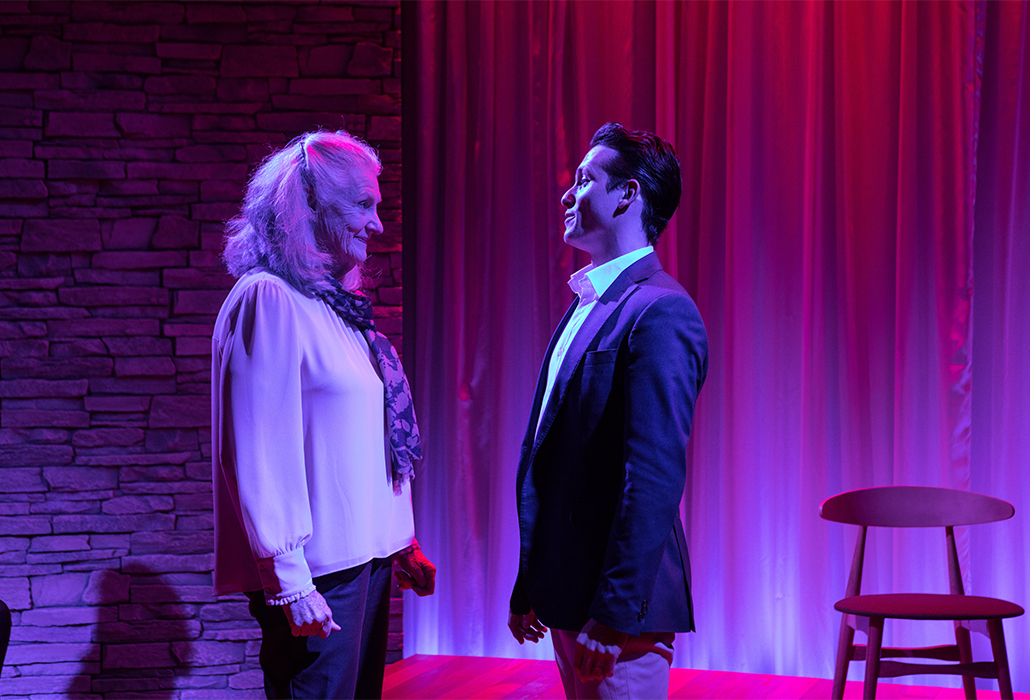 The cycles of behaviour and responses are sad reminders of the fragility of the human spirit and the unpredictable outcomes of our relationships, the words we use and the words we leave unsaid. Honour and love are treasured and are at times potently optimistic.

The compassionate and melancholic presence of grief is etched with a delicate touch of hope and at other times is the ruthless precedent of shocking acts. The play perceptively and discretely explores the aching suffering of sorrow, guilt and uncertainty.

The process of aging is also overwhelmingly stamped with loss and grief. As we age our memories can remain lucid, change or are modified or embellished into something different. Jess reflects “I don’t know how memory works. I think of it like sedimentary layers of the brain, but I’m sure that’s wrong.” 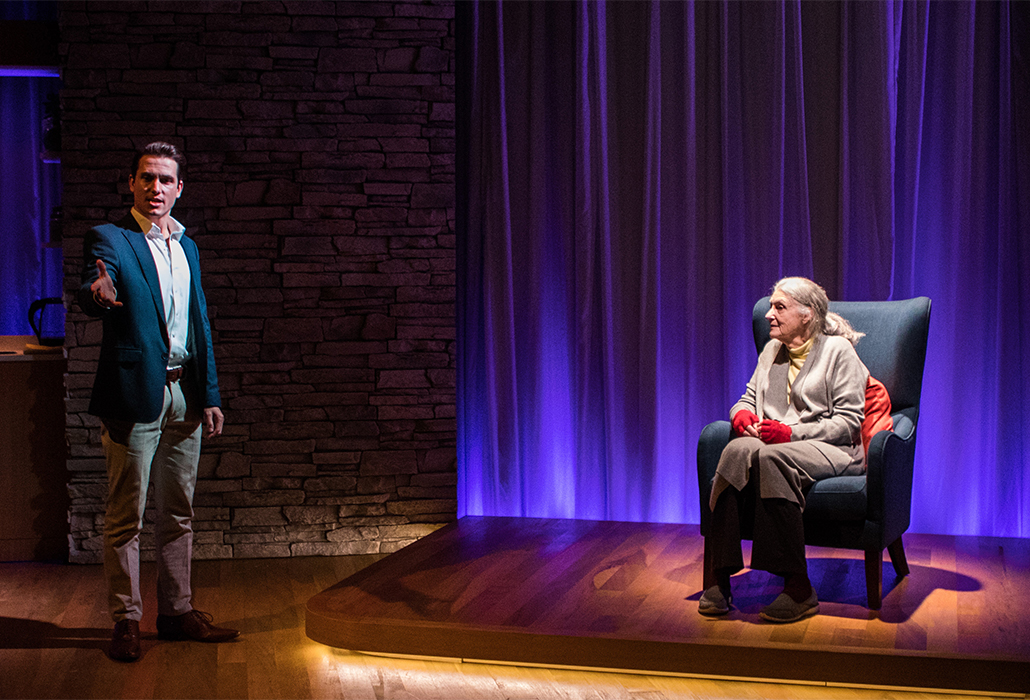 However despondently for some “living is a distraction from death.” In contrast others will embrace life with vigour, enthusiasm and candour.

The play is an experimental expression of future scientific possibilities that culminates in the challenges of a world where robotic clones of individual people provide computerised companionship.

In the director’s note he writes “Scientists predict that A.I. will be increasingly capable and more prevalent in our lives in the next 60 years. The benefits could be huge, but its challenges also immense.”

The talented cast members were exceptional in accurately rendering their stage characters and intelligently communicating their attributes and emotions. They were perceptively persuasive in delivering truthfully, and with integrity, their characters’ life stories.

Maggie Dence’s portrayal of Marjorie was critical to the success and credibility of the play. Her compelling performance wavered between the uncertainty and vulnerability of dementia and the self-assurance of being loved by her husband.

Jake Speer’s refinement in merging the duality of the Prime, he was not robotic but still not human was unobtrusively expressed in the subtle nuances of his convincing performance. He never wavered in presenting the believable façade of a human.

Depression, anxiety, guilt, remorse, sadness were sympathetically merged by Lucy Bell to form the struggle of Tess’s troubled character. She elicited the powerful emotive force that is strangling Tess’s recovery.

Richard Sydenham was outstanding as Jon. He seized Jon’s humanity and wholesomeness in a tender and sympathetic portrayal. His measured performance offered an eloquent humility that was genuine and gentle.

Director Mitchell Butel analyzed and clarified this relevant, important and gripping play with a commanding astuteness, a discerning interpretation and a distinguished theatrical presentation. Under his direction the words from the pages of this play were imbued with a confronting but evocative reality. 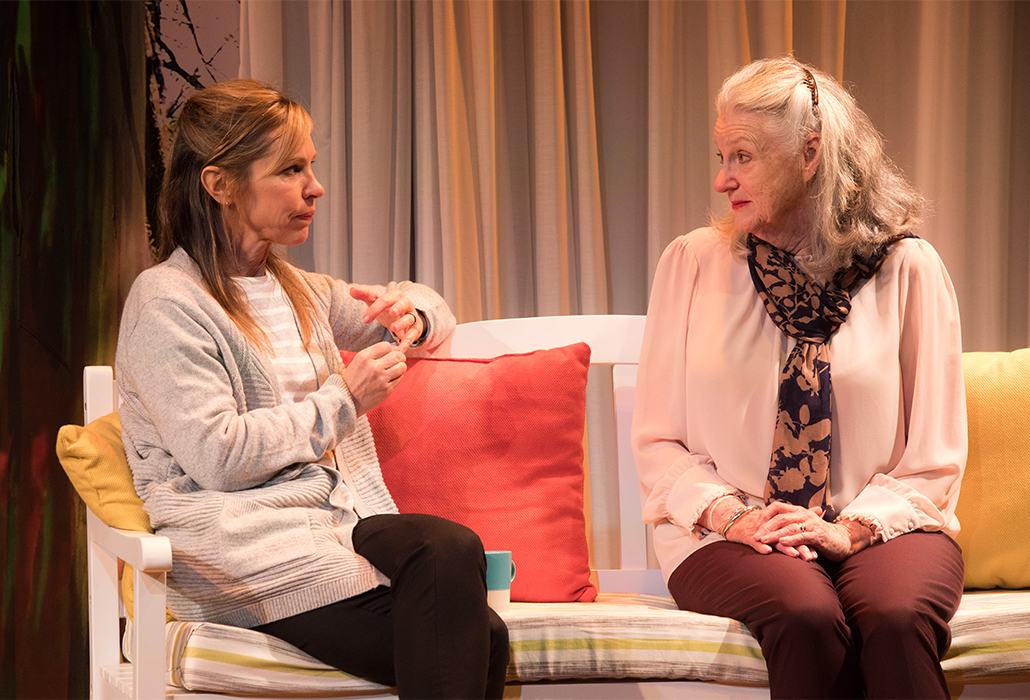 Set & Costume Designer, Simon Greer delivered a dignified and stylish set restrained and timeless in intent. His meticulous attention created the ambience embedded in the play and gave authentic clues to an impressive evening of theatre.

The definitive lighting by Lighting Designer, Alexander Berlage amplified the textual characteristics of the warmth of the wooden floors, the gossamer sheer of the curtains and the earthy tones of the bricks.

The play was like looking over family history on a quiet moonlit wave as it touched the shore and receded to another world. After viewing Marjorie Prime you are left to contemplate where you are in your own life’s narrative. 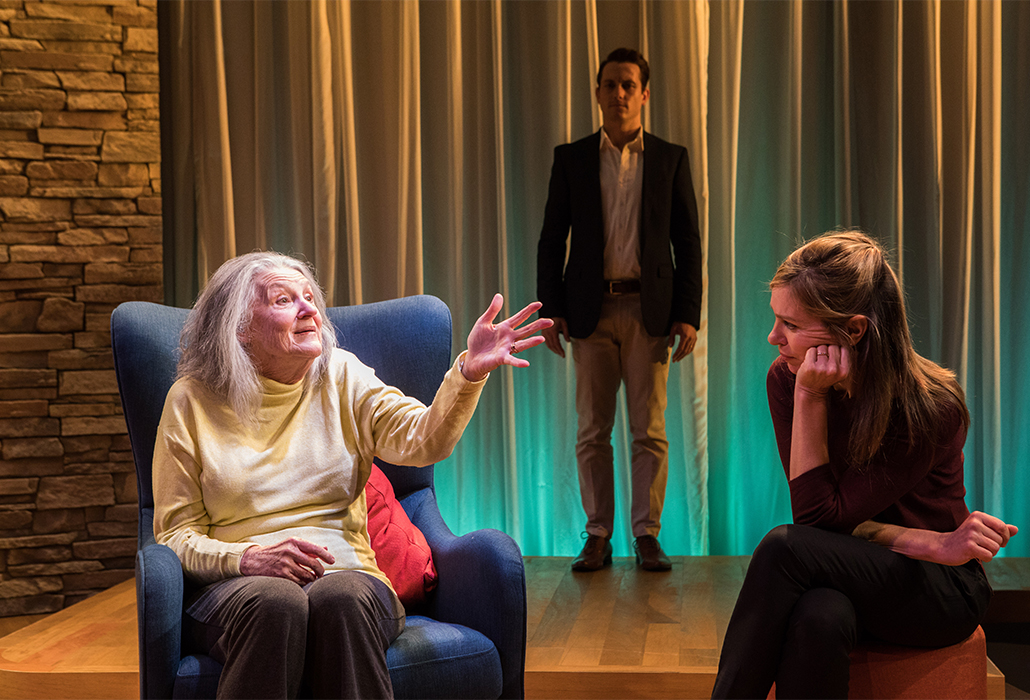 When the cultured house of Hermes announced it is creating it’s first pop up store, the fashion world listened. To then discover it would be located within Melbourne’s famed “Le Louvre” boutique, it caused hearts of Australian fashionistas to flutter. From the 2nd to the 14th of November, these two…