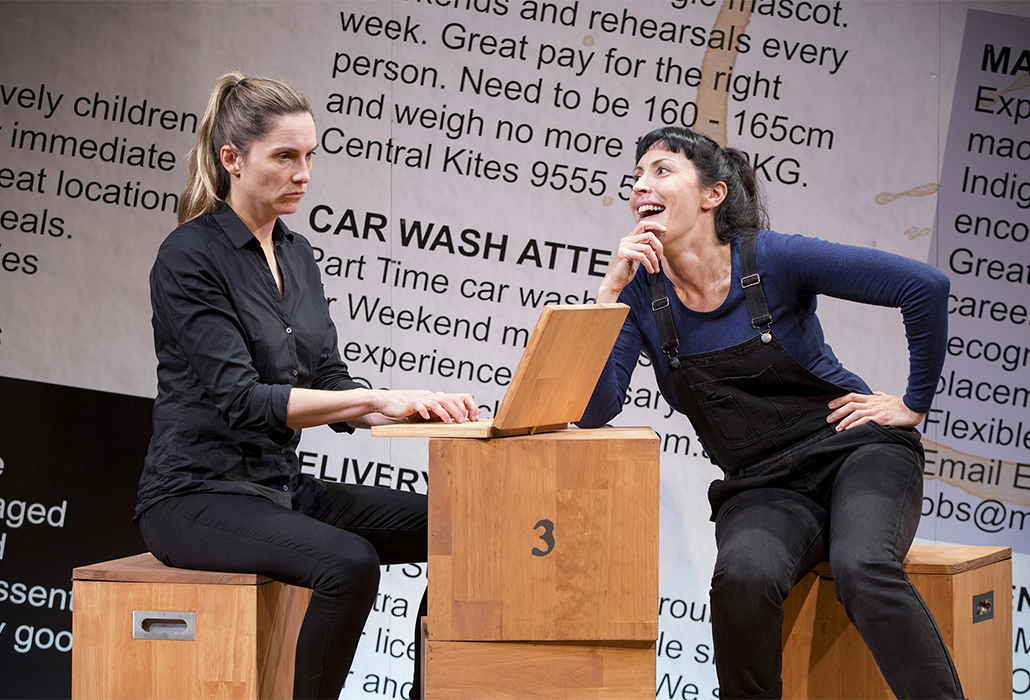 There is nothing quite like a warm blanket of comedy to shake away the winter blues. Unqualified at the Ensemble Theatre, Sydney, cloaked the audience in a congenial coat of chuckles, wrapped it in a jovial scarf of laugh out loud incidents and topped it off with a hilarious shawl of mishaps.

Unqualified is an original comedy written and acted by Catherine Moore and Genevieve Hegney. It evolved from their first-hand experiences and the encouragement of Claudia Karvan, one of Australia’s most recognized actresses. 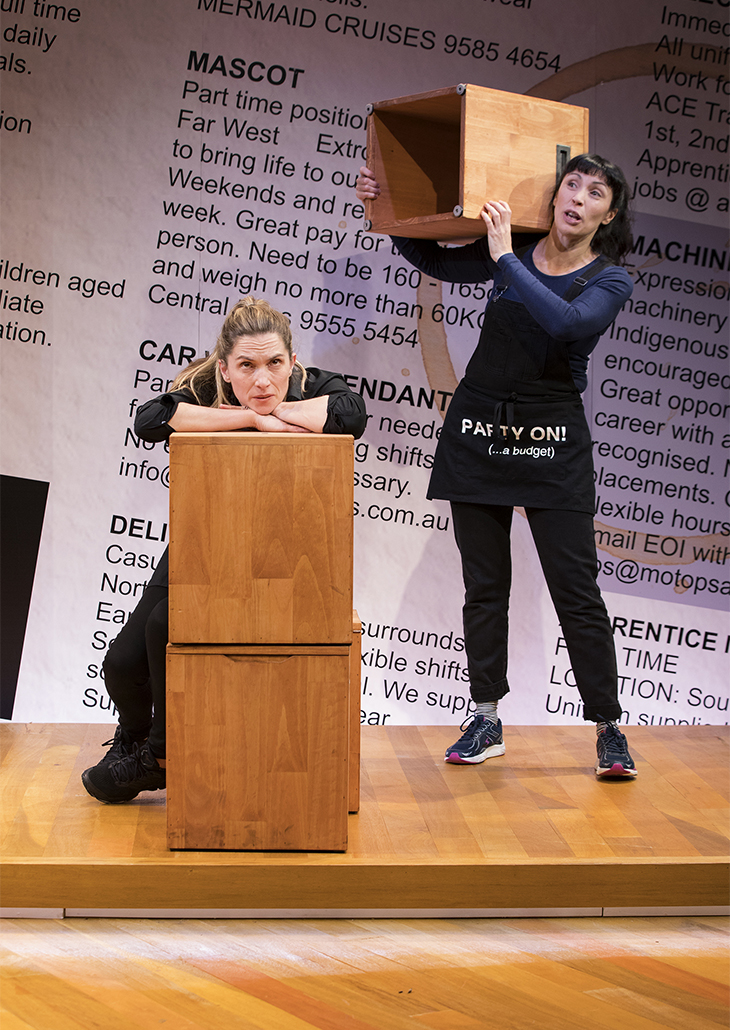 Highly motivated Moore and Hegney embarked on writing a six part comedy series which has yet to be produced. Artistic director of the Ensemble Theatre Mark Kilmurry “suggested the ladies adapt their series into a play. Gen and Cath had never written a play before but were open to the challenge. The greatest being, how to turn a six part TV series with a cast of 50 into an 80 minutes play with a cast of two”. Genevieve Hegney and Catherine Moore have been unequivocally successful and now have a highly entertaining stage hit on their hands. This dynamic, creative, funny duo has written a contemporary play with a very topical context.

Their meticulous observations of relationships, habits, routines, current issues, human frailties and values are imbued in the perceptive patterns of human behaviour communicated in their fine performances. 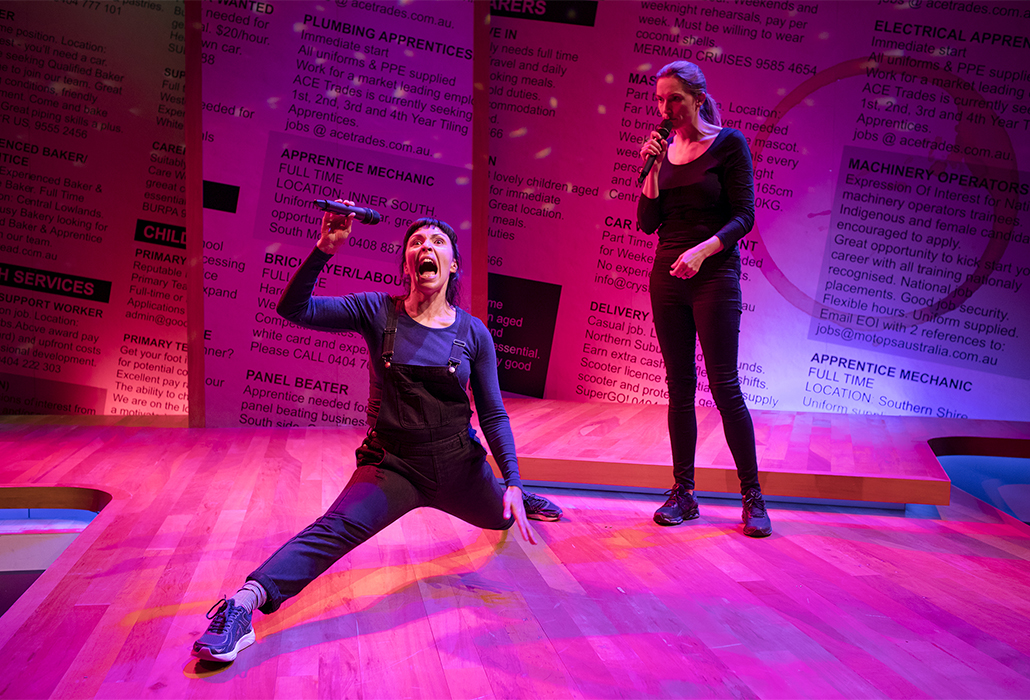 They have made humour out of painful situations and movingly articulated and affectionately expressed it in this uproariously funny play. The inspiring qualities of persistence, determination and trust underpin the hilarity within the structure of the play and drive the development and blossoming of a deep friendship.

Joanne Truebody (Genevieve Hegney) is plagued with marriage and financial problems. Her well known TV star husband of over twenty years has run away to Bali with his current girlfriend and left Joanne to bail out their real estate business and deal with pending bankruptcy.

In the opening scene Joanne presents at Centrelink seeking a job solution. She is interviewed, lays bare the facts of her husband’s infidelities and when the interviewer discovers Joanne’s husband is the famous TV host a riotous chain of events erupt. 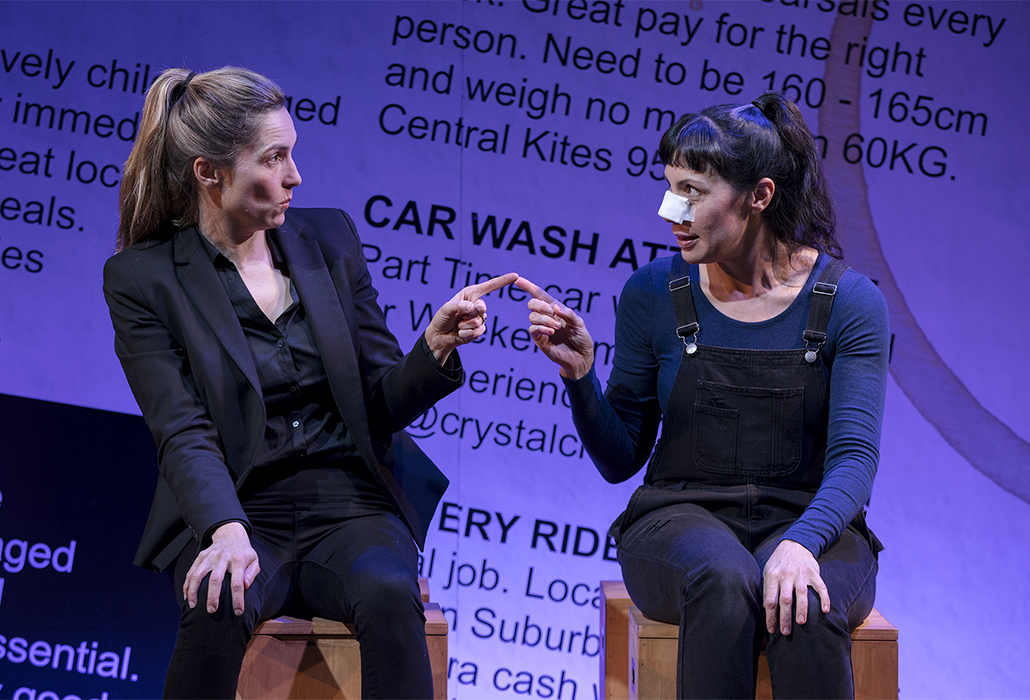 Meanwhile Felicity Bacon (Catherine Moore) is sadly disillusioned with the predetermined career path her father has planned for her. She definitely does not share her father’s passion for the butchery and is horrified at the thought of taking over the reins of running his business. So, she also seeks an alternative job at Centrelink.

The two women collide both metaphorically and physically. Joanne is jailed for assault and threatening with menace. Fortunately Felicity comes to Joanne’s rescue and bails her out. 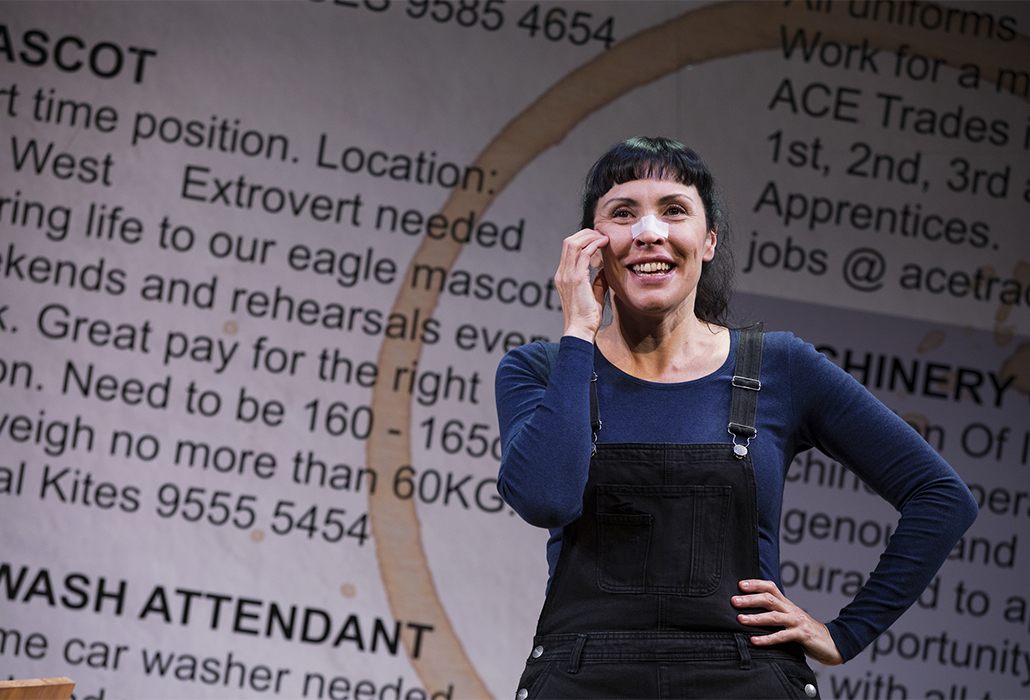 After overhearing Joanne’s telephone conversation with her wayward husband, Felicity tactfully supports Joanne’s idea for running her own employment agency and of course with Felicity as a partner.  However there is one major problem, they don’t have any employees on their books.

Not daunted in the least they decide to stretch their ‘qualifications’ and take on any jobs that come their way. This is the ultimate recipe for a variety of disastrous, ludicrous and side splitting situations.

They oversee a wedding, swapping roles and outrageously funny one-liners. Their energy and vitality is tested to the limit including minding children, catering, cooking, setting up furniture, turning on the music and playing the role of marriage celebrant. 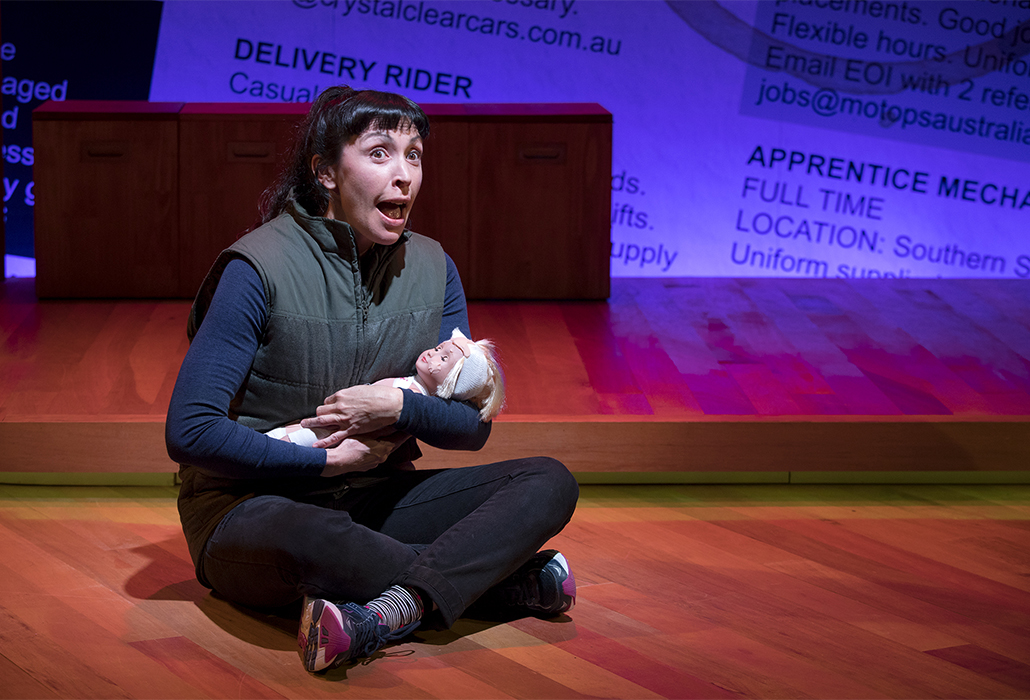 Joanne and Felicity casually teach at the Circle of Love, a child care centre run by a tyrannical and sadistic Director, who is determined the pre-schoolers are taught the dangers of bitting other children. Joanne and Felicity are ordered to develop a lesson plan that will achieve this outcome. What follows is a brutal, but laughingly obnoxious classroom scene.

They also accept positions as carers for an over 100 year old bed ridden bipolar woman with fatal but hysterical consequences. Their capacity for diversity is endless.

Teaching ethics and drama to high school students is a platform for Joanne to further reveal her intelligence and supressed dreams. Being severely under the influence of alcohol is dangerously liberating for her and she regrettably expresses very cruel criticisms of Felicity. 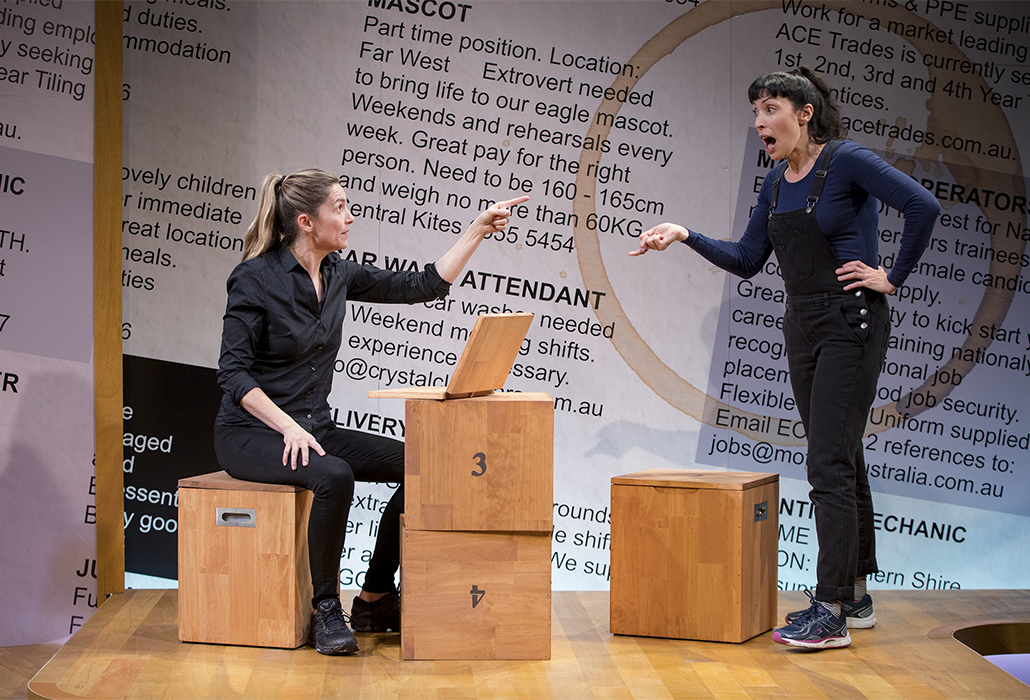 The follow-up discussion tightly cements their unique friendship. It is vital for each of them personally, and also supports their economic survival.

It is very special to witness astonishing performances by the actors who also wrote this brilliant play that dazzles with comedy and is endearingly a story of the power of friendship.

Its success is grounded in the first hand experiences of this vibrant pair. Their energy and versatility is boundless. They changed characters with persuasive professionalism and breathtaking skills. Their distinctive voices captured the varying tones, accents, rhythms and styles of the supporting characters in the play. 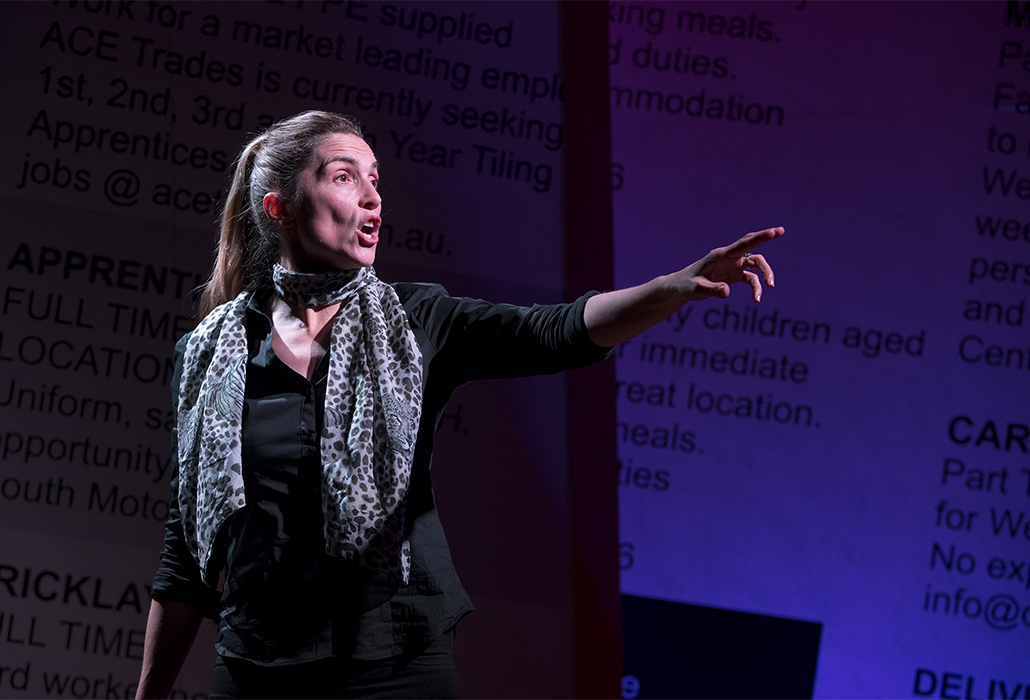 Hegney and Moore’s timing was faultless. Their sense of humour and playfulness while performing on stage gave a rare evening of comedy that was truly funny and reflected their enthusiasm for life. As Robin Williams articulated “comedy is acting out optimism.”

The Creative Team under the guidance of Director Janine Watson were totally aligned to the ethos of the play. Unqualified is her mainstream staging debut and her success emanated from the thoughtful fluidity of movements in the complexity of continual changes. 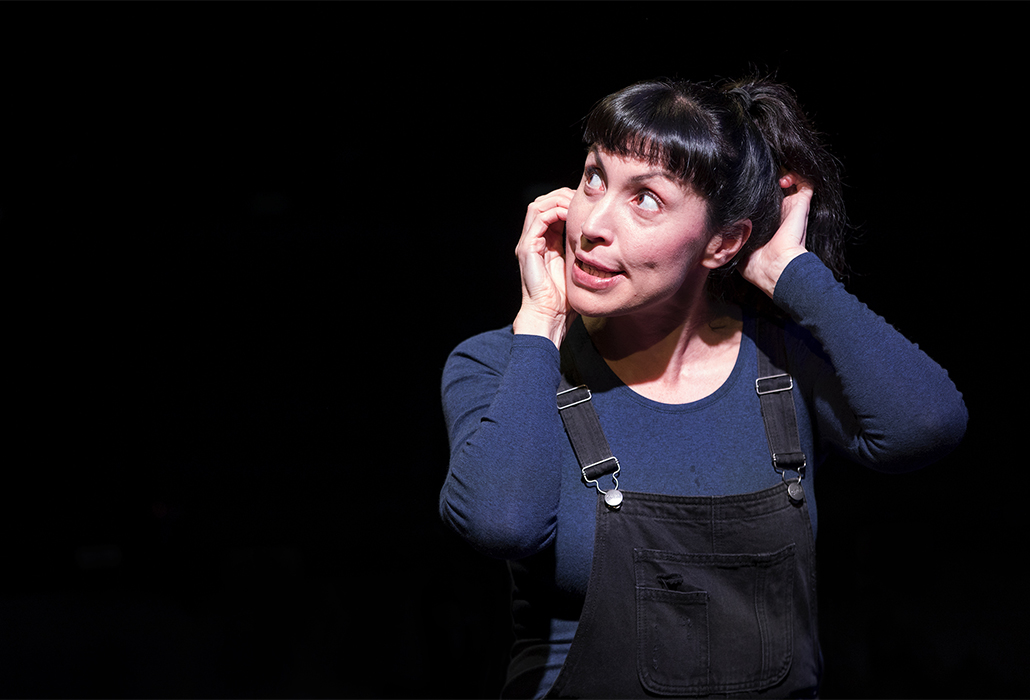 The way Janine Watson has staged the play makes the transition to tour Unqualified a very viable option. The minimalist set designed by Simon Greer was the perfect foil for the action of the play. The serrated edge of a torn newspaper outlined in black featured advertisements for positions available, it was a simple but ingenious concept for the backdrop.

Artistic Director Mark Kilmurry of the Ensemble Theatre must be applauded for his commitment to presenting new work in particular comedies. His decision to stage Unqualified has given audiences a feast of laughs and showcased the creative talents and enterprising skills of two very amazing women, Genevieve Hegney and Catherine Moore. 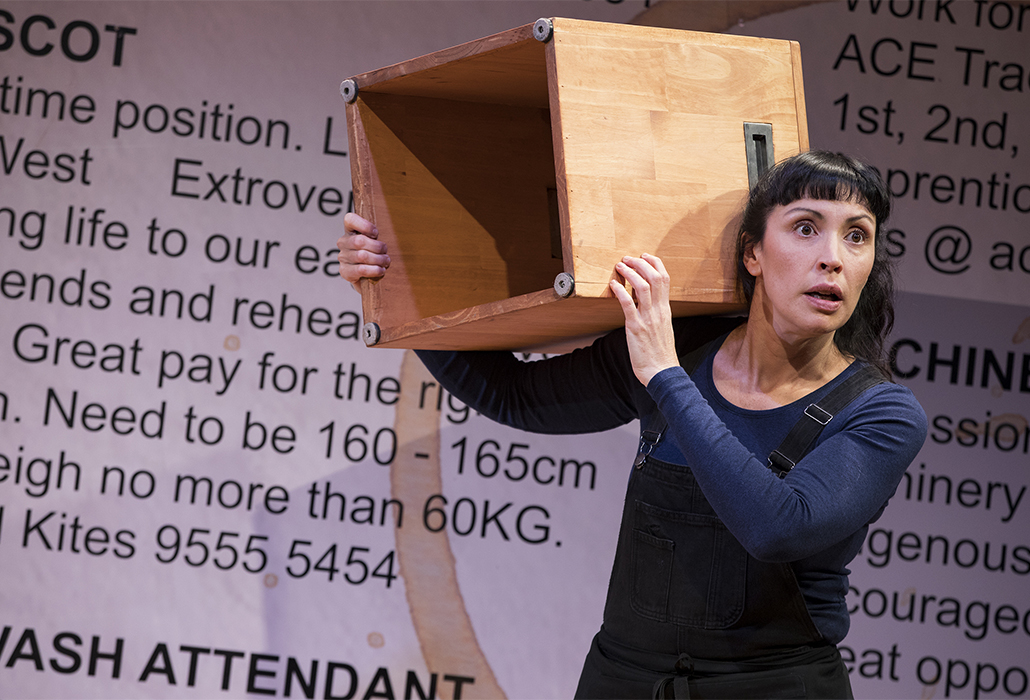 by Genevieve Hegney and Catherine Moore

The Musketeers from BBC 1 are as they should be, brave, dashing with extraordinary strength in vulnerability while revealing character flaws as heroes, fighting for honour, loyalty and love