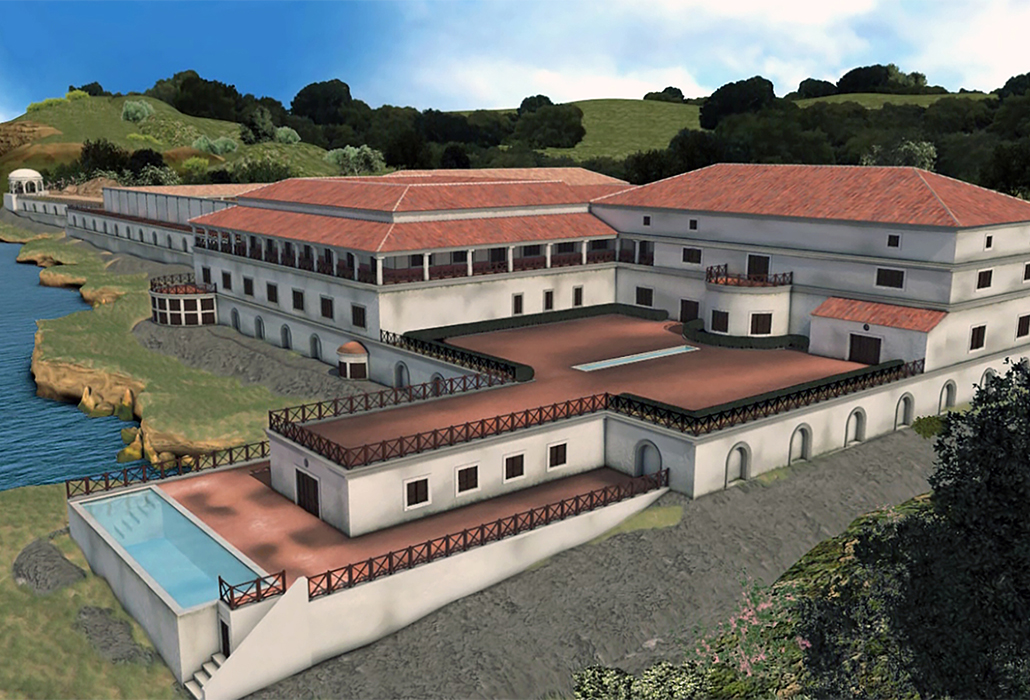 Uncovered from the burial grounds of Herculaneum, conquered by the lava flow from Mount Vesuvius, August 24, 79 AD, the first major exhibition of treasures from the Villa dei Papiri, one of the most spectacular of all Roman first century villas, will be on show in its replica; The Getty Villa, June 26 – October 28, 2019.

“…you could hear the shrieks. … many besought the aid of the gods, but still more imagined there were no gods left, and that the universe was plunged into eternal darkness for evermore” 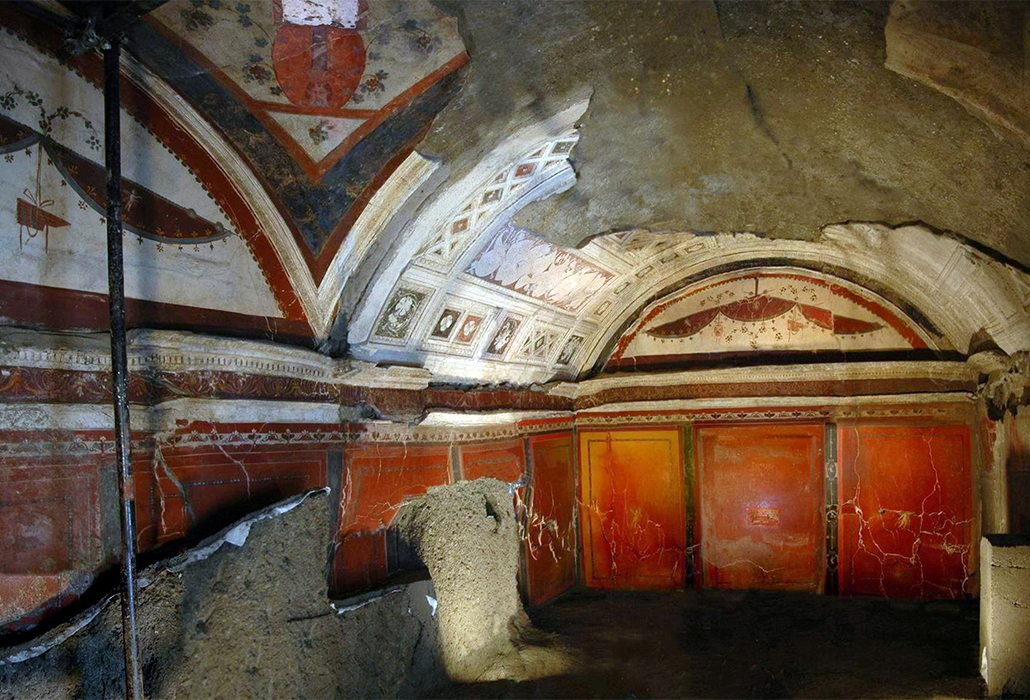 The remains of the Villa Dei Papiri at Herculaneum, yielded a private residence with spectacular coloured marble and mosaic floors, gloriously frescoed walls, important bronze and marble statuary, plus a unique library of more than a thousand papyrus scrolls (from which it gets its name). 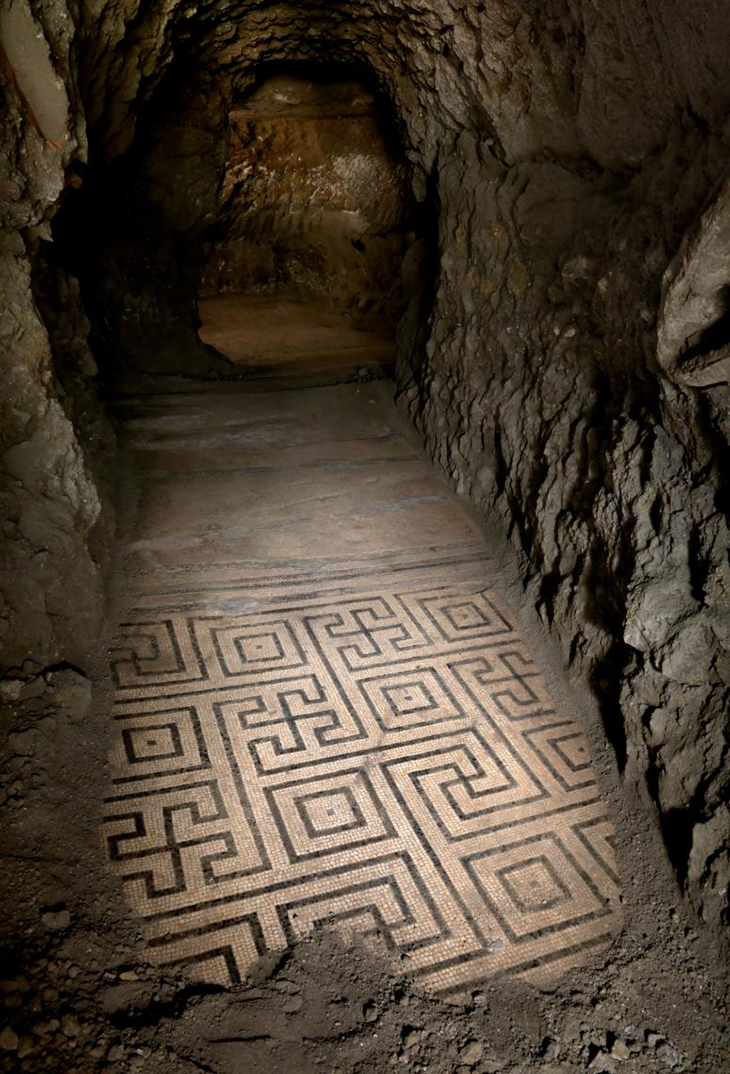 Discovered first during the 1750s, the treasures will be accompanied with more recent finds, from what is a still very active site. Today archaeologists are also still working on opening and reading its badly damaged papyri.

“The Villa dei Papiri … surviving library of papyrus scrolls, provide an unprecedented insight into the philosophical interests of its aristocratic Roman occupant – none other than the father-in-law of Julius Caesar,” explains Timothy Potts, director of the J. Paul Getty Museum.

The site was excavated by Karl Weber, a Swiss military engineer in the royal guard, under the sponsorship of King Charles VII of Naples.

He directed a crew of conscripts and convicts, as they dug through the ancient lava flow, creating a series of shafts and tunnels to find and remove the most impressive treasures to augment the collections of the King’s recently established museum. 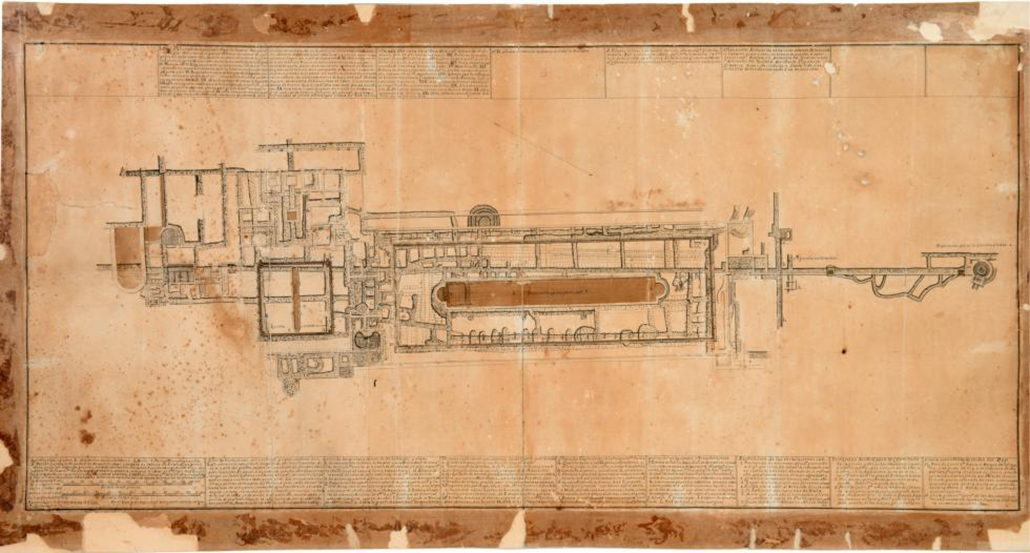 He also had them carefully record their find spots and their architectural contexts for his own excavation plan, which reveals detailed evidence of the original layout and decoration that in turn, allowed J.Paul Getty to replicate the villa in California. 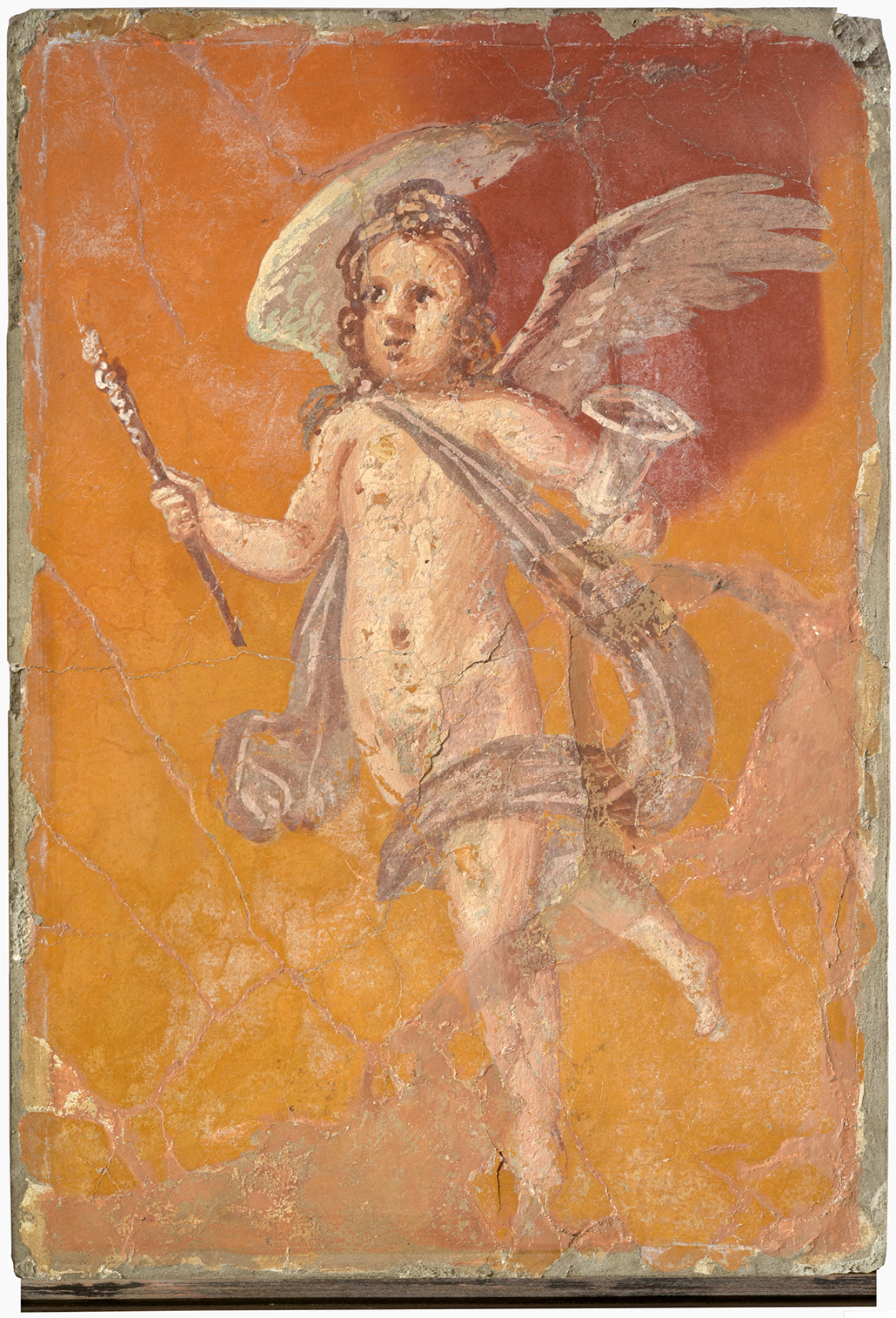 Kenneth Lapatin, curator of antiquities at the J. Paul Getty Museum said “Recreating the Villa dei Papiri appealed to Mr. Getty because of its association with Julius Caesar through his father-in-law, Lucius Calpurnius Piso Caesoninus, the villa’s supposed owner. 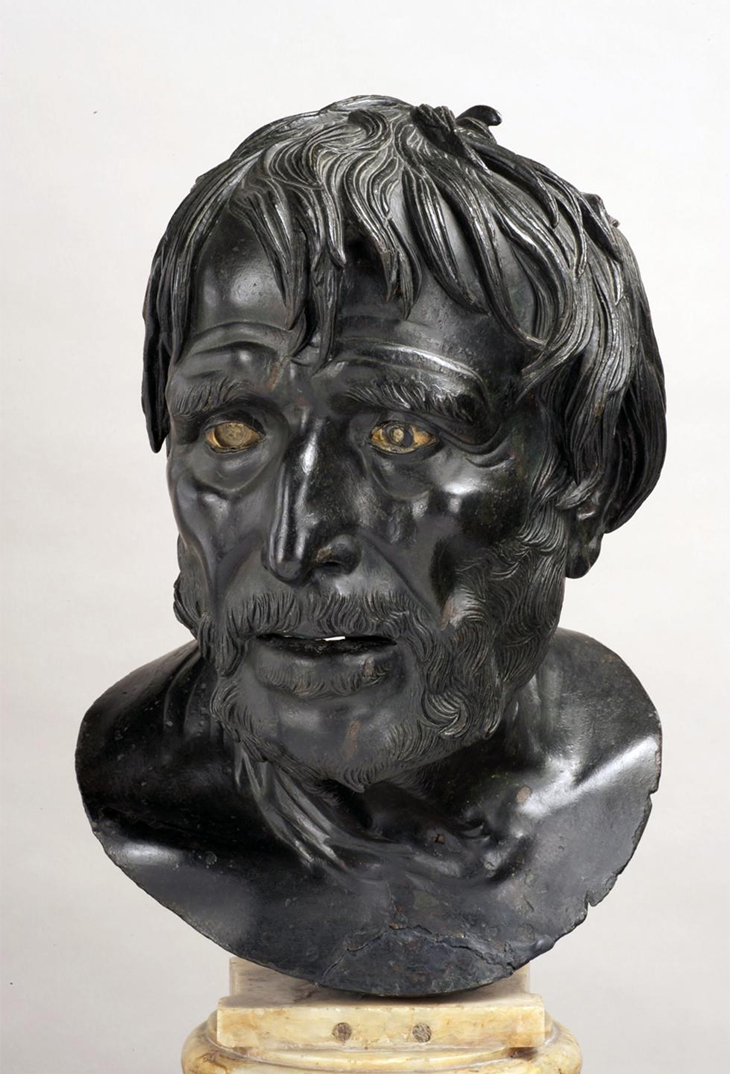 Getty often compared himself to ancient Roman rulers and particularly admired Julius Caesar and the emperor Hadrian, a fellow art collector and villa owner. Although Getty, unlike Hadrian, did not live in his villa, his reconstruction was a key component in his attempts to refashion himself from a Midwestern businessman into a European aristocrat” Lapatin noted.

Representations of Greek intellectuals, including busts of ancient Greek philosopher Epicurus, and other artifacts, such as a bronze piglet and a portable sundial, recovered from the Villa dei Papiri, reflected the owner’s interest in Epicurean philosophy and rhetoric. 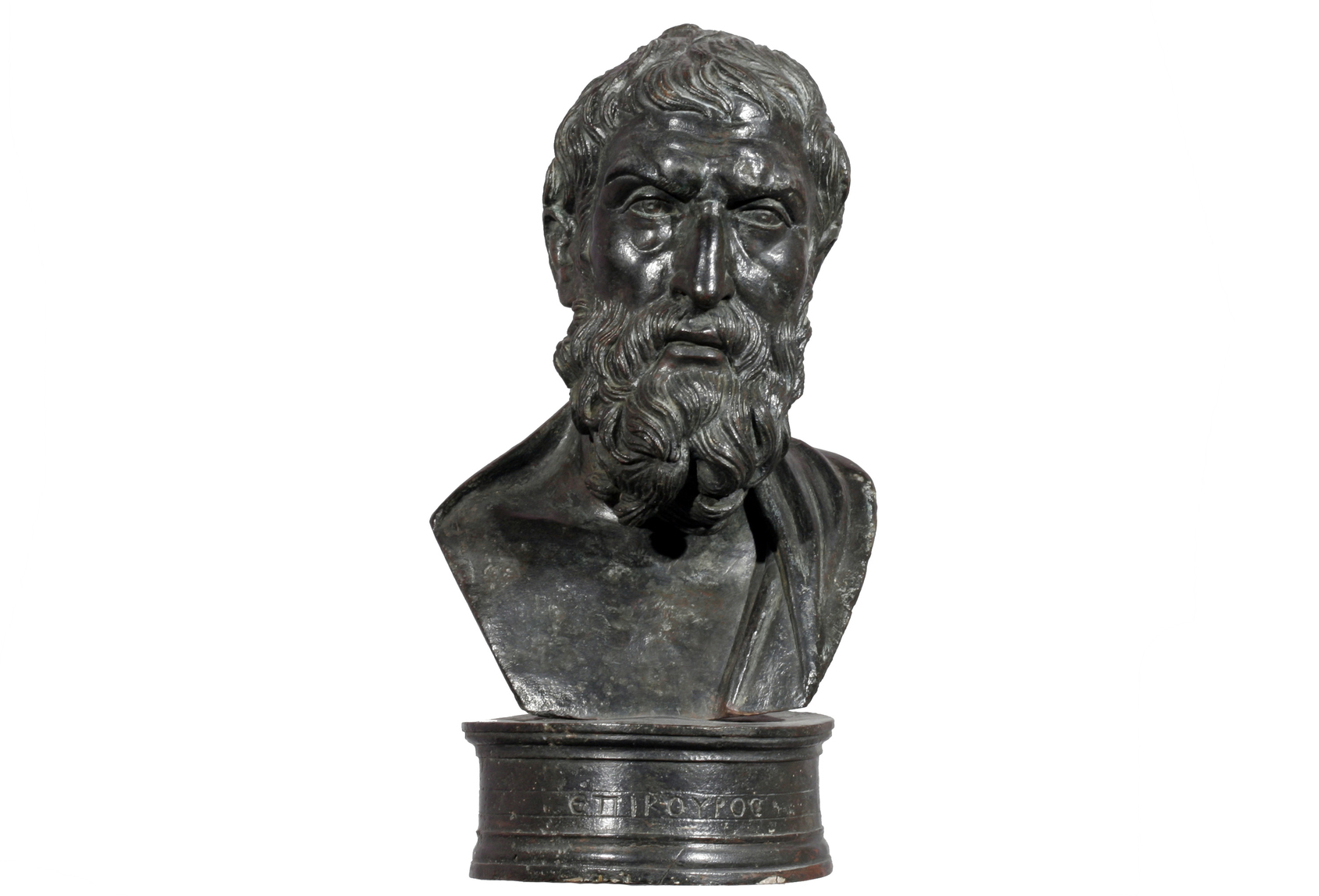 Epicurus argued if pleasure is perfect within each instant and “infinite time contains no greater pleasure than limited time, if one measures by reason the limits of pleasure,” … it is all about finding the purest joys of life in the unique richness of human encounters. 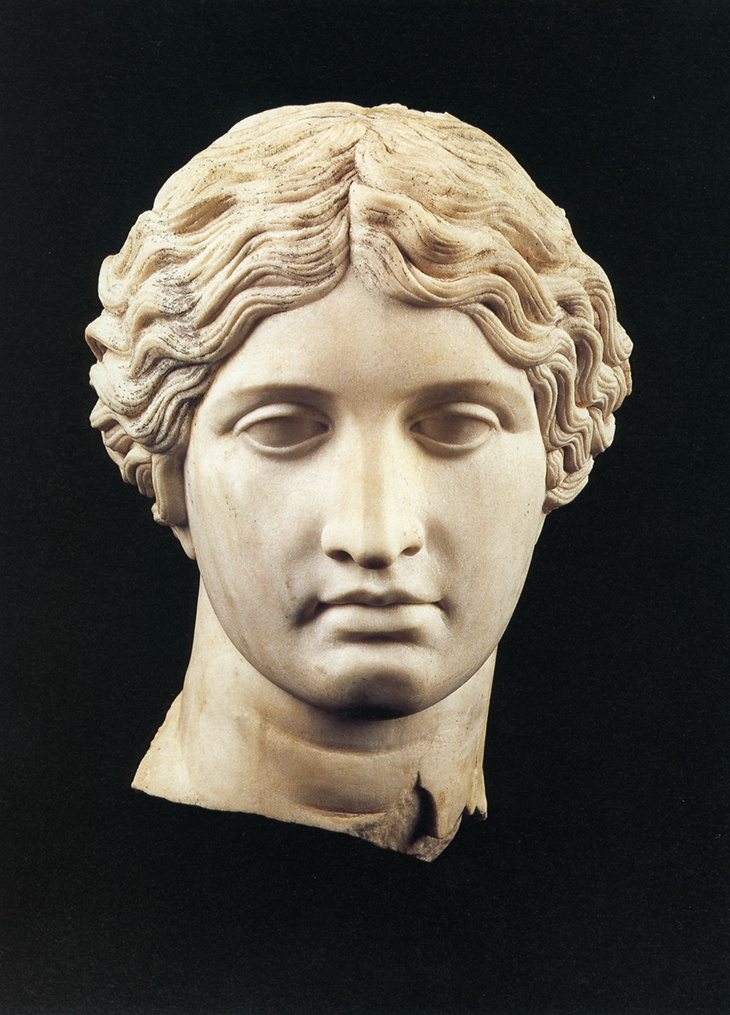 Portraits of eminent figures of the Hellenistic period (323–31 BC) predominate, which also reflects the particular interests of the villa’s owners in Hellenistic philosophy and politics.

The original arrangement of the sculptures invited viewers to compare the accomplishments and failings of the subjects as well as the artistic styles of the works.

Timothy Potts also noted… “among the most impressive of these finds is a rare bronze sculpture of a Drunken Satyr.

This wondrous work is, as part of a collaborative conservation project with the Museo Archeologico Nazionale di Napoli (MANN), undergoing analysis and conservation treatment in our conservation studios before going on display in the exhibition” he said. 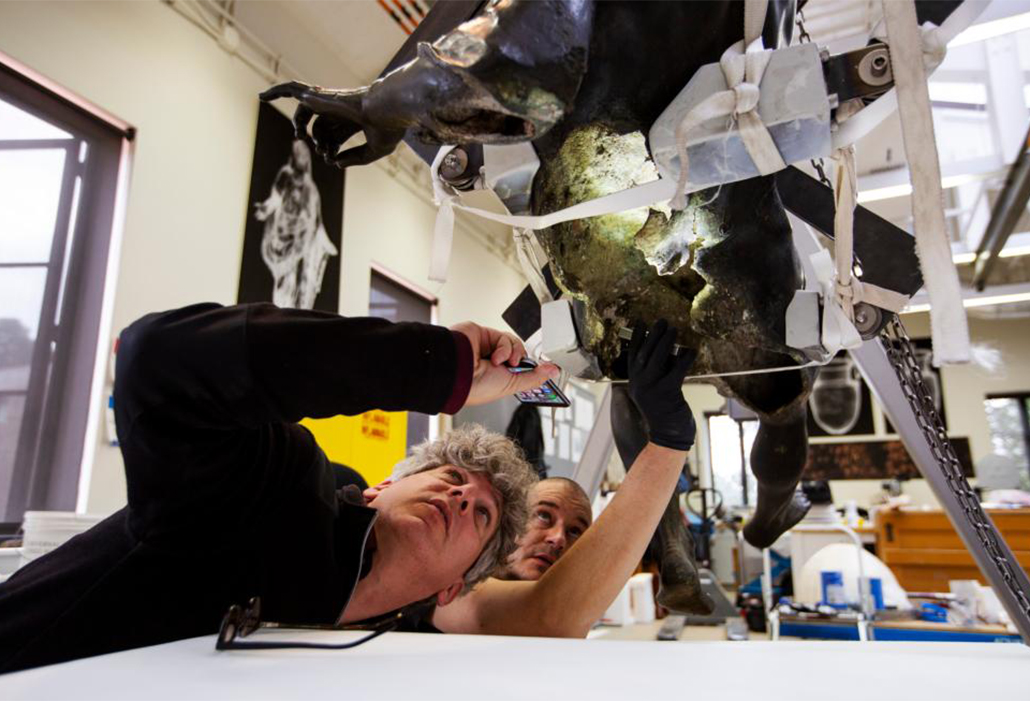 A mythical follower of the wine god Bacchus, the satyr wears a pine wreath with flower clusters and has pointed ears, small horns, wild hair, and wattles. He snaps his right thumb and middle finger in a gesture associated by ancient authors with Bacchic abandon. The replica of the satyr can be found in the Getty Villa’s Outer Peristyle pool.

How to best display the sculpture to enhance viewers’ appreciation of its artistry is a challenge for conservators. 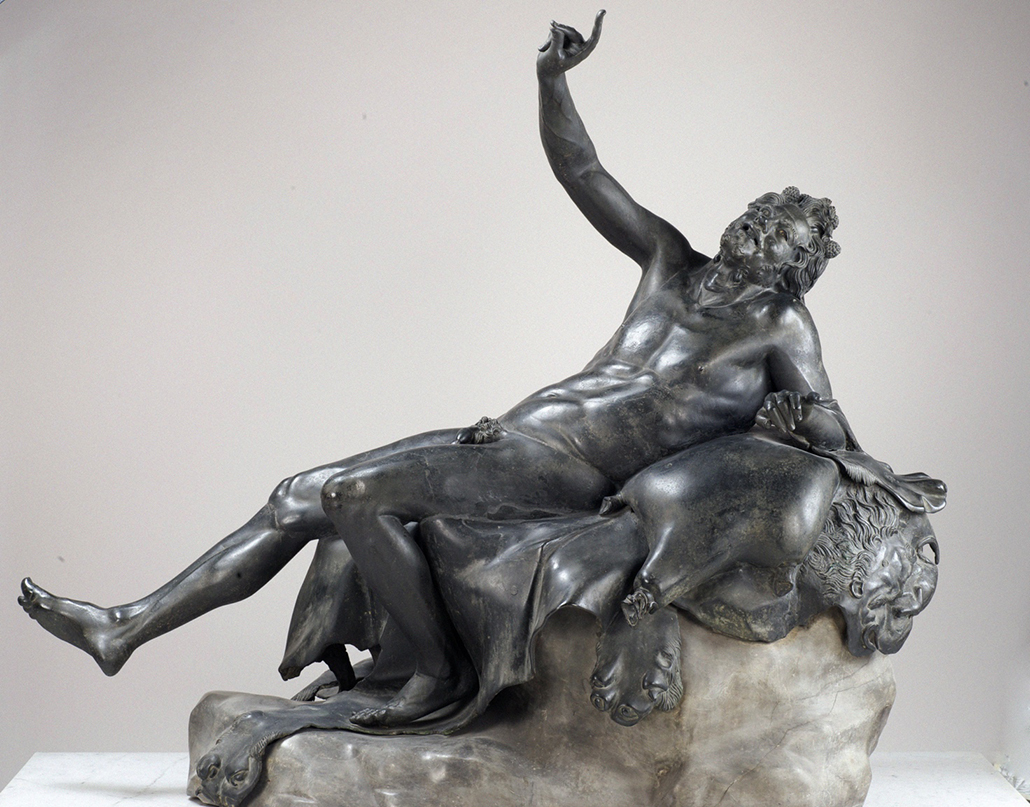 How the statue was originally manufactured will also be explored, through techniques such as X-radiography, endoscopy, technical imaging, and non-invasive analytical methods.

The patricians of Ancient Rome first established villa culture in a desire to enjoy the coveted and perceived pleasures of country life by enlarging the layout of a Greek peristyle house, which had inspired their ideas.

They met morphed it into a dwelling that reached the height of its popularity during the later republican period.

The layout, arrangement and progression of rooms in a Roman Villa were very important and, carefully thought out.

Just as the temple in ancient Greece had been related to its sanctuary as a whole, and to the sphere of influence of the divinity dwelling within it, so the Roman Domus (house) was characterized by its axiality, the domination of its central courtyard by a principal room, and the relationship to its space.

The 1,100 papyrus scrolls recovered from the ancient villa 1752-54, make up the only surviving library from the classical world.

Camillo Paderni (about 1715–1781), first director of the Royal Museum at Portici, was the first to attempt to open the carbonized scrolls by slicing through the scrolls lengthwise, cutting their charred outer “bark” to expose the writing.

The texts were copied for study and eventual publication, and then the papyri were scraped to reveal additional layers. 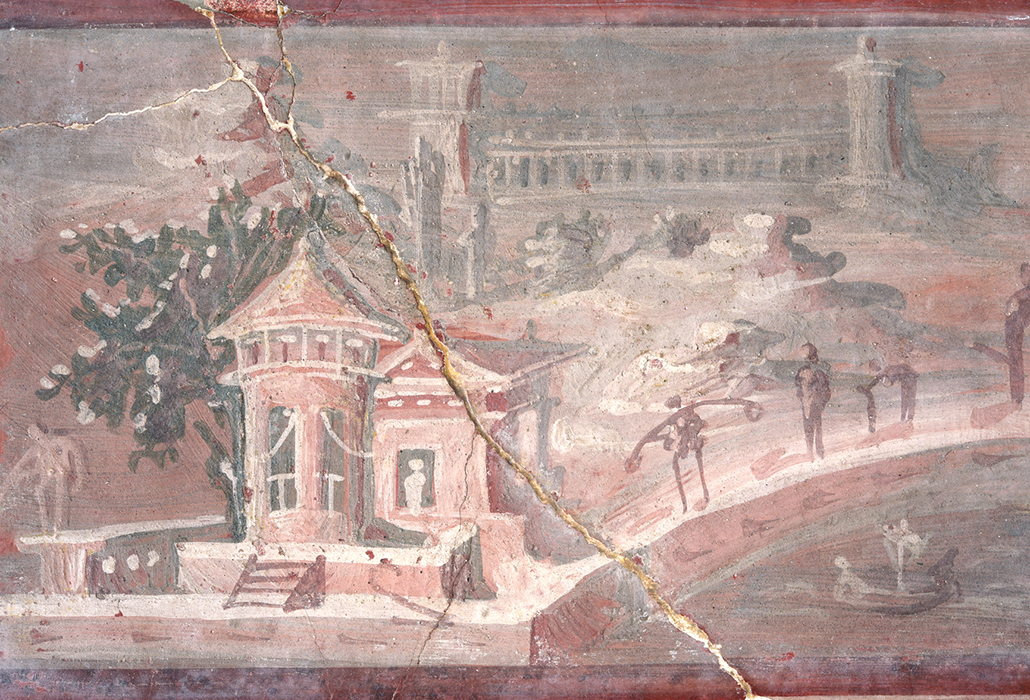 Following other attempts, during the late 1900s and early 2000s, advanced imaging technologies enhanced the legibility of the previously opened papyri.

The prospect of digital unrolling and decipherment of the hundreds that remain closed is now within reach as part of a major research project at UCLA, which is both imaging and virtually unscrolling the papyri prior to being placed in the exhibition.

The results of the project will be available later in the summer after the exhibition opens. View through to Vista in the Getty Villa, USA, an architectural recreation of a villa from Ancient Rome

Those texts opened to date feature Greek philosophical treatises, particularly by Philodemus of Gadara (about 110–30 BC), a follower of Epicurus, who recognised pleasure as the greatest good. 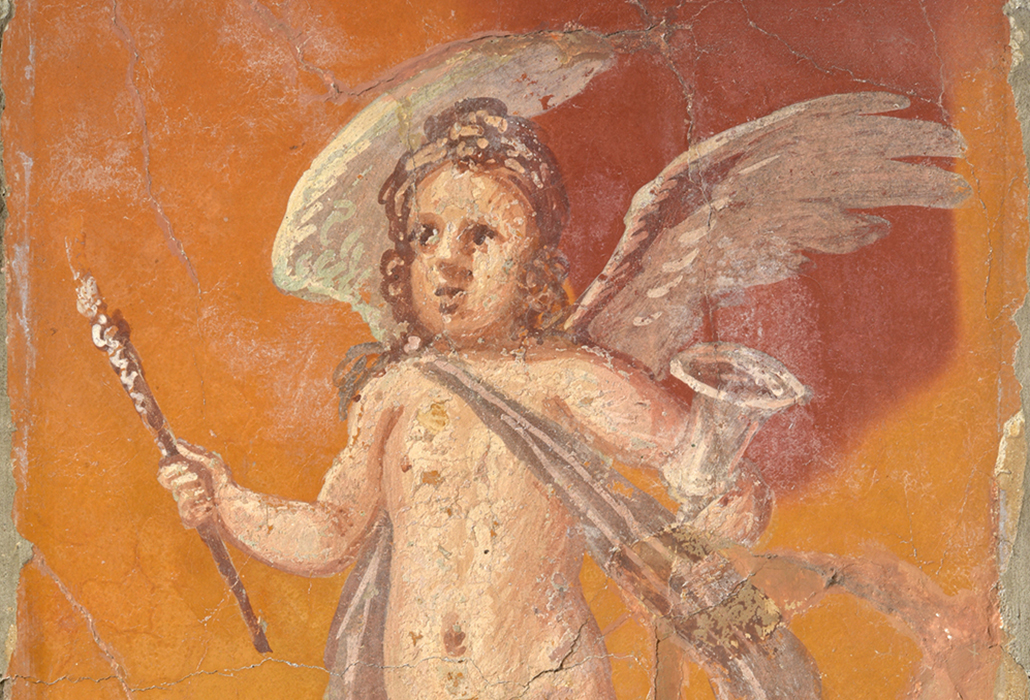 Buried by Vesuvius: Treasures from the Villa dei Papiri

Curated by Kenneth Lapatin, curator of antiquities at the J. Paul Getty Museum.

The exhibition is organized in collaboration with the Museo Archeologico Nazionale di Napoli, Parco Archeologico di Ercolano, and Biblioteca Nazionale di Napoli “Vittorio Emanuele III”, and with the generous participation of the Bodleian Libraries of the University of Oxford, the Metropolitan Museum of Art New York. The exhibition is made possible with major support from Elizabeth and Bruce Dunlevie. It is generously supported by The Spogli Family Foundation. Additional support is provided by the J. Paul Getty Museum’s Villa Council and the Italian Cultural Institute.

THE SYDNEY FAIR, reflecting on the design, art and style of the twentieth century will be held in the Moore Park Entertainment Quarter, 22nd to 25th May, 2014