What is it about the Georgian era (1714-1830) in England that makes its furniture still so desirable? A bureau cabinet, that serves many functions like this superb George II period (1727-1760) carved mahogany piece attributed to cabinetmaker Giles Grendey (1693-1780) is entirely memorable, a piece that would have been highly sought after by an eighteenth century English gentleman. Their visions, dreams and hopes of a glorious future were demonstrated by the an elegant disposition of country house interiors filled with splendid works of fine art, both paintings and sculpture, as well as fine hand crafted quality furniture, furnishings and objet d’art.

Throughout the century they projected with passion a personal style, which they pursued ultimately to a high point of excellence. In so doing they left a legacy that still affects the way we think and view the world. 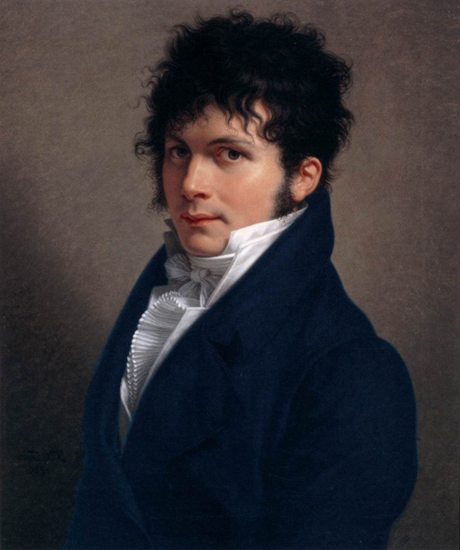 Francois-Xavier Fabre:Portrait of a Man 1809

An English gentleman believed ‘the character of the master of a house…can be judged by the manner in which it is arranged, decorated and furnished*

These were men who ‘lived art’ and they became great patrons of their age, together with their brilliant architects, designers and craftsmen.

Art is a language in imagery and sound that communicates ideas and expresses conceptions about self, community, intellectual, spiritual and cultural beliefs, behaviours and practices.

Style is at the very center of human social intercourse and endeavor. It is the medium through which we express ourselves and communicate with those around us the things we believe are necessary to our comfort and well being. In the process, they assist and aid our nurturing and growth.

The outward and visible becomes the vehicle and expression for the intangible world of both the spirit and the soul. By the eighteenth century in England, Europe and America an expansion of knowledge about antiquity was revealing that ancient artists and writers were accustomed to free expression, with religion and honour paramount to society’s daily existence.

This revelation affected the social and moral values of most western societies who were now beginning to travel in wider circles that every before. It also expanded the ornamental designs and motifs used for fine furniture. Well read, gentlemen understood that the case for visual aesthetic beauty had been well established in antiquity and during this period restraint became inextricably interwoven with the traditions attached to fine furniture making. 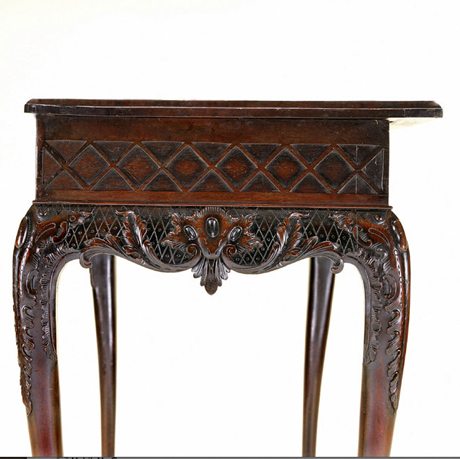 During the late 1720’s in England due to the lifting of import duties mahogany timber became readily available in significant quantity in log and plank form. This happened between 1725 and 30 and from then on the use of mahogany for fine furniture took precedence over walnut and helped enlarge the repertoire of designs available.

World economies were beginning to boom and the expansion of trade meant that more than ever before it was possible to customize furniture to suit your needs. Mahogany became especially desirable for cabinetwork and superior joinery because of its beautiful figure and stability.

It’s use meant shapely cabriole legs could be made finer with a new vigor and crispness and so it was not long before cabinet makers and carvers alike recognised, and took advantage of its many qualities.

The hallmarks of quality furniture at this time is all about proportion that is pleasing to the eye, the colour and figure of the timber, especially when through age it has mellowed to a wonderful soft patina. If the condition is very good and the craftsmanship of the cabinetmaker very fine it will always be sought after by collectors.

Greater demand meant greater output and for a chair maker mahogany meant that he could create a lighter curved design of greater complexity, while maintaining considerable strength.

English gentlemen refined the art of elegance from 1714 – 1830 during the reigns of England’s Kings George 1 – George IV.

Elegance was all about a display of ‘correct’ taste in appearance, in behaviour, about projecting satisfying or admirable neatness, as well as ingenious simplicity.

Their houses, interiors and furniture reflected their ideals and desire to be seen universally as arbiters of taste and style. Their scholarly patronage became the impetus for a period of intensive creative and artistic activity.

By the middle of the eighteenth century London was the largest city in Western Europe with 750,000 inhabitants. By comparison Edinburgh in Scotland had 57,000 and Dublin in Ireland 90,000.

London was not only more populous, but also offered a different quality of life. Nowhere else in Britain was so urbane and no other city as exciting or so shocking all at the same time.

From the 1750’s onward in England there was a decade of almost unparalleled productivity and inventiveness in England as the changing needs of a gentleman and his fashionable tastes guided the work practices of cabinetmakers.

From the curves that demonstrated a preference for motifs gleaned from the French rococo style, the simplicity and elegance attached to traditions surrounding the neoclassical movement emerged.

The furniture trade in England entered a period of almost unparalleled productivity. 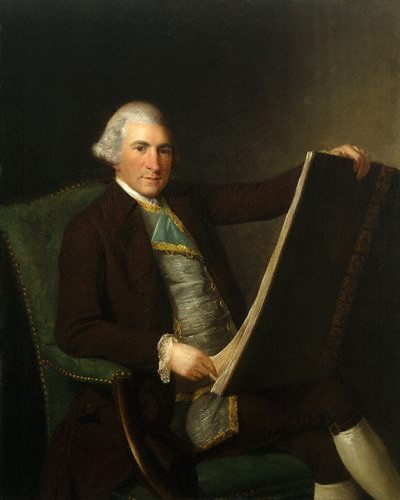 The new classical climate of taste after 1760 as dictated by designer Robert Adam (1728 – 1792) provided ideal conditions for fine craftsmanship and design to flourish. The system of patronage set high standards of design and execution.

The neoclassical movement of the eighteenth century in England, Europe and America was all about wanting to create a new society, one that would be pure, balanced and reasonable, qualities that transposed into all art forms. English gentleman wanted to convince each other their view of nature, in particular, was directly associated with the virtuous lifestyle they led.

The very best furniture was expensive and created for what was a privileged elite. It was conveniently located near the government offices and their rich contracts. 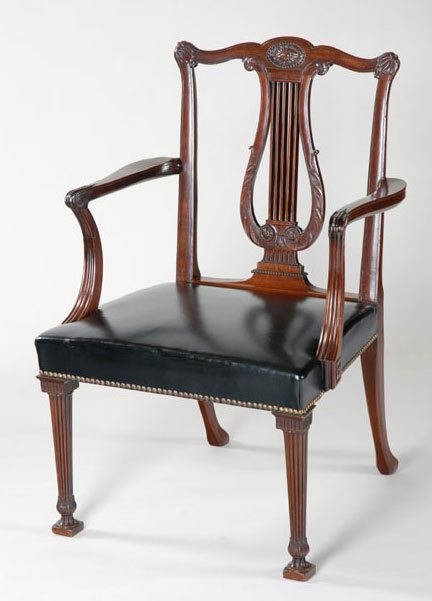 St Martin’s Lane was also the location of the St Martin’s Lane Academy, founded by artist and social commentator William Hogarth in 1735. He promoted a cult of beauty in his, Analysis of Beauty (1753), which brought about a revolution in English furniture design.

With a concentration of artists, craftsmen, architects and tradesmen working in the same area, there was ample opportunity for exchange of views, ideas and skills.

It was also where Thomas Chippendale, a cabinetmaker from Otley in Yorkshire set up his retail outlet in the town.

In 1754 Chippendale published a book of his designs for furniture, the Gentleman and Cabinet Maker’s Director upon which much of his fame rests. Apprentice and master at the Hay Cabinetmaker’s shop inspect the workmanship on a chair. Historic Colonial Williamsburg, Williamsburg, Virginia

It was copied by many provincial cabinet makers, a testimony to Chippendale’s competence and the popularity of his book on many a work bench.

Chippendale was in his own right a designer, as well as an astute businessman, so his ability to adapt as styles changed served him well and he produced further editions of his book in 1755 and 1762 with others produced posthumously after 1786. He catered for the needs of a Gentleman’s valet with a brushing slide now inserted above the drawers in a commode that held items for his wardrobe. The valet was able to use it for many reasons, including brushing his master’s coat each morning. Between 1791 and 1794 Thomas Sheraton a Baptist Minister and Drawing Master published his designs in the Cabinet Maker and Upholsterer’s Drawing Book. His fame rests entirely on this publication which meant his furniture was copied all around the globe.

George Hepplewhite’s The Cabinet Maker and Upholsterer’s Guide published in 1788 also helped to disseminate fashions introduced by Scottish born London based neoclassical architect Robert Adam and several other leading furniture makers to a much wider clientele. 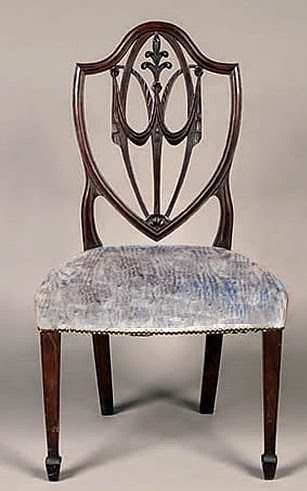 Hepplewhite and Sheraton’s designs traveled abroad to both America and Australia where they also suited architectural styles.

Hepplewhite created designs for a far wider range of clientele. This meant many of his designs were for more ordinary furniture with certain forms becoming associated solely with his name.

Through Chippendale, Sheraton and Hepplewhite the ‘classic’ style of English gentlemen was transmitted down through the ages. 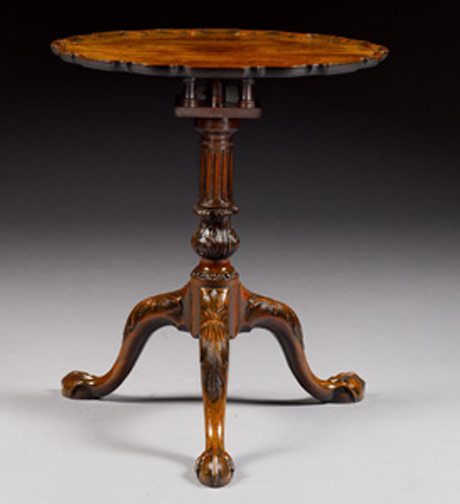 Just looking at the delightful George II mahogany pie-crust topped tripod base table that used to be owned by an English gentleman Percival D Griffiths dating from 1755, let’s us know why this style of furniture is, and has remained appealing.

The taking of tea would become an increasingly popular pastime and throughout the eighteenth century provided further impetus for the design of small tables and indeed all furniture made of mahogany.

The top was called pie crust because the moulding of the top resembled the edge of a pie. It’s supported on a classical column and the stem is resting on a tripod base and the very shapely curved cabriole legs terminate in claw and ball feet.

There is decoration on its knees and the top of the table displays good figuring and colour in that splendid timber mahogany, the most desirable of its day. Claw and ball feet are said to be oriental in origin, the original dragon’s claw replaced in Europe by an eagle’s claw.

20th century English gentleman Percival D Griffiths, FSA (died 1938) formed a collection of English furniture that was well known in his lifetime. Disposed within his country manor the collection was documented by furniture historian R.W. Symonds.

His publication became the seminal scholarly work on English furniture from the era of the restoration of King Charles II (1660) to the end of the reign of George II (1727-1760) when it was published first in 1929. The Antique Collectors Club published it again in 1943 as A Memoir on a Great Collector of English Furniture’. It revealed how he cleverly Griffiths collected the very best of eighteenth century furniture and fine objets d’art to fill the interiors of his country residence ‘Sandridgebury’.

He set a standard of excellence and created a role model for other like minded connoisseurs and collectors to follow revealing the different styles preferred by English gentlemen and produced by renowned cabinetmakers during the English Georgian age.

Jack Ryan: Shadow Recruit, tells just how Jack Ryan, whom we are never allowed to forget has a Ph.D became involved in the world of espionage in the first place