Turned or ‘thrown’ chair of Ash turned, with seat board of riven oak, on loan to the V & A Museum in London from Amgueddfa Cymru National Museum, Wales. Its just the type of chair with seats triangular, the back and arms and legs loaded with turnery, that Dicky Batemen would have picked up in Herefordshire

During the first decade when Australia was being colonized by the British Horace Walpole, 4th Earl Orford (1717- 1797) son of England’s first Prime Minister Sir Robert Walpole, was using decorative ornament inspired by a literary and pictorial interest in Gothic architecture at Strawberry Hill, his villa nearby the Thames at Twickenham in the London borough of Richmond in 1775.

The architecture of the past appealed to Horry’s nature, especially following his Grand Tour of Europe when he visited copious cathedrals and churches, loving their atmosphere and the mental impressions they made.

Not satisfied with just designing the architecture of his house, he wanted to acquire pictures, sculpture, furniture and objets d’art of every period and style.

Searching for them occupied much of his time and he and his intimates became avid collectors of furniture preferring old to new.

His gathering together of seat furniture was one of the first examples of ‘antique collecting. He wrote how Dicky Bateman picked up a whole cloister full of old chairs in Herefordshire “… of wood, the seats triangular, the back, arms and legs loaded with turnery a thousand to one there are plenty up and down Cheshire.”

They cost ‘three and sixpence and a crown apiece’, and in an age when a chair cost nine shillings and more, it was a considerable saving. A fine collection of antiques and art from many periods of contemporary design over the centuries since will be showcased at the Westbury Antiques stand at the AA&ADA 2015 Sydney Antiques Fair 9 – 13th September, Kensington Room, Randwick Racecourse.

The key to making informed buying decisions about antiques or art is to read widely, research willingly, set yourself a budget and work with a dealer whose philosophies and ideas align with your own.

From ordinary to extraordinary; a Regency cast iron bootscraper to a Regency cased fruit set for 12, from a stylish ceramic jug to a very appealing jardinière, from the 1930’s to a French Directoire period clock, you can check out some wonderful pieces from a selection provided by an impressive list of exhibiting dealers.

Every piece has been vetted for authenticity and knows you may find the special ‘statement’ piece you have been wanting for ages. Good design in any era is important and for this fair there are pieces from 50 years or more years ago in Australia on offer. They are valued for their quality, craftsmanship and fine aesthetics in the world of antiques and art.

Since Horry’s time collecting antiques and art has offered something for everyone. Today it is a pleasure indulged in by a great many people from many different walks of life. For those new to the world of antiques and art prior to purchase its good to know that design, provenance, condition, repairs, fakes, marriages, attribution and quality of both materials and workmanship and other considerations do matter, and we have produced a document about antique collecting you can download free.

Vintage costume is part of the new philosophy of recycling as much as we can. This group of Lucite purses from makers such as Llewellyn, Stylecraft of Miami from the 1950s U.S.A and offered by Online Antiques work very well with their selection of 1950’s black strapless party dresses.

They  illustrate that the 100 year rule people once thought set in stone is today no longer considered relevant. Sir Arthur Streeton (1867-1943) one of Australia’s favourite painters working on canvas or with watercolours during the first half of the 20th century, recorded this superb view of Venice on a Bright Morning in 1908, available on the stand of Christopher Day Gallery, who offers both early and modern Australian and European paintings.

Signed on the left hand corner, like its counterparts it helps tell the story of how artisans were elevated away from being an aspect of the ‘artes liberales’ during the Renaissance golden age, because they received acknowledgment from their fellow citizens by symbolically signing their wares, an important measure of their success.

In Paris a love for the exotic during the late eighteenth and early nineteenth centuries among the social elite whether under the ancien regime or later empirical times, led to a high point of achievement in many different techniques in the art of cabinetmaking. Highly trained in the art of veneering and cabinetwork, there were many fine cabinetmakers in Europe, England and America, plus renowned ébéniste’s in France, who all became accomplished in all aspects of producing a piece of furniture. Walter & Co in Melbourne are offering a ‘superior’ French 19th century Boulle work centre table with fine quality ormolu mounts. 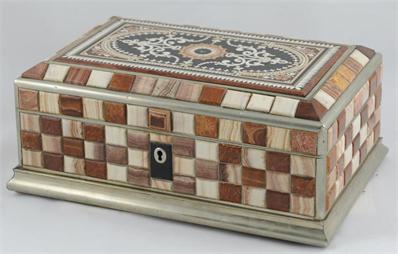 The proprietors of Walter & Co in Melbourne, Peter Valentine of Valentine Antiques Gallery at Bendigo and Warwick Oakman from Hobart in Tasmania are all third generation antique dealers.

He has a passion for boxes and this very interesting Victorian Agate & Pietre Dure Jewellery Box dates from 1870.

Warwick Oakman advises the Tasmanian Museum and Art Gallery on Colonial Furniture and Art, the Allport Library and Museum of Fine Arts, as well as the Tasmanian National Trust.

He specializes in unique and very special pieces and among others has a rare pair of Scottish Regency dining chairs in mahogany. A rare pair of Scottish Regency dining chairs in mahogany, identical to the chairs supplied in cedar to first Government House Hobart, in the 1820s courtesy Warwick Oakman Antiques, Hobart

They are identical to the chairs supplied in cedar to first Government House Hobart, in the 1820s.

Surrounding ourselves with items of aesthetic beauty fulfills a deep emotional need within us all.

Antiques and Art for me go together like peaches and cream, each complimenting each other while standing alone individually, offering much more than the eye can see at first glance. Discover the intimate world of the fashionable with each piece you purchase and the story it has to tell reflecting our attitudes and philosophies, fashions and passions, which are intrinsic to their charm and desirability.