Catching a wave with limitless possibilities enriched with hope, that’s what George Turner (Erik Thomson) is seeking when he flees from the suburbs of Sydney to Weld in New Zealand to take on a sea-change 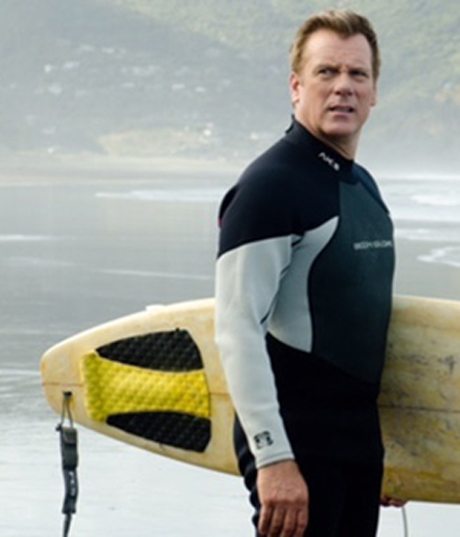 George is a writer of a popular column, producing 800 Words weekly for a news website. Up until now it seems that George has pretty much just cruised through his life to date.

Now he is trying to recover from shock after shock, from the unexpected and tragic death of the love of his life.

His wife Annie was knocked down and killed by a car as she crossed the road. The last thing he remembers is her looking back to smile at him.

George decides at the height of his raging emotions that he is going back to his roots, the small seaside town of Weld in New Zealand, where he spent his formative years surfing.

He wants to find a way for he and his teenage children Shay (Melinda Vidler) and Arlo (Benson Jack Anthony) can in his perception stop standing still, and start to forge a new life.

What sets this Channel Seven dramedy series high up on the scale of excellence for locally produced television series, is the quality of both the writing and the acting. 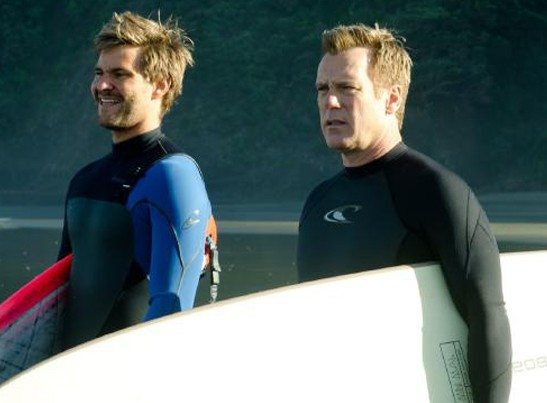 It is intelligent and all the people are great characters, full of frailty with often hilarious results.

George buys his new house on the Internet sight unseen, thinking it is the holiday house where he spent time surfing in his youth, which proves not right, or a good idea, although he thought it was at the time.

Perhaps it will eventually turn out to be a blessing in disguise as the family will need to work and pull together if they are to create their new environment, although In the beginning, it is only about more hurt, frustration and constantly feeling awful. Erik Thomson and his younger co-stars Melinda and Benson are truly wonderful together as a family struggling to adjust and find their way forward.

‘Presenting your very own slice of heaven a much loved and sought after seaside property, with amazing views, if only you could see them… is the bait that lures George to consider travelling back across the great divide.

A Scottish born actor popular with Australian audiences, Erik Thomson did spend time in New Zealand before relocating to Australia two decades ago.

It would seem he understands well why George believes the prospect of taking up surfing again will give him a way to heal and to make sense of his life.

A cracking ensemble of actors garnered from both Oz and NZ allows us to believe its producers have found the recipe for success. Especially when you add in Woody (Rick Donald), the local optimistic half glass full builder handyman with a huge heart of gold. He instantly becomes George’s faithful sidekick.

Created by Series writers James Griffin and Maxine Fleming for South Pacific Pictures in Auckland in collaboration with the Seven Network in Australia, the majority of Series One of 800 Words was filmed in the picturesque North Island.

Being attacked by a round ball like sculpture rolling down the hill as they arrive in town doesn’t augur well for what lies ahead for the George as he struggles to get his rental car into reverse.

They don’t succeed and it wipes it out with the fire engine and half the population of Weld turning up with local dignitaries to welcome them to town.

Like a bad omen, the situation George and his family are in just keeps going from bad to worse as their house is revealed to be in a truly dreadful state of repair, peeling paint, holes in walls and ceilings, no doors on rooms and no power.

With only one toilet that’s not working properly and indeed explodes on the first day, it is reality the house is a dump. On the morning after they arrive Woody rescues George when he nearly drowns in the surf, dumped from a surfboard he has found in his shed.

This turns out to belong to his rescuer, who downed tools and left the job when the owner of the house died.

Just like the Titanic, the Titania the ship carrying the container full of all their personal belongings has also been lost at sea, meaning all the ‘things’ that connected them to their mother, wife and former life are now all gone

Realising he is going to have to start writing again to earn more dollars, George upsets all the occupants first up by labelling Weld a ‘dead-end’ town.

Bewilderingly George, Shey and Arlo realize that Weld is a town thriving on gossip, the rumour mill constantly working overtime.

It is so different to life in the city of Sydney back home and they also discover they are now the ‘celebrities’ in town.

This doesn’t work very well at their new school, where being Ozzie kids ensures they are a target for ridicule. At the moment their life seems to be all about negatives, but who knows, one day it may prove a positive they can all work with.

In the meantime there are waves to conquer, nude sunbathers on their own beach to come to terms with joining and a disaster of a house to finish and furnish.

The kids constantly look at their father in bewilderment until he finally admits he has realised what he has done, taking them all away from the support of family and friends at a times they were struggling with the emotion of it all.

It proves hard when everyone seems to know what they are thinking before they do themselves.

When George finds out the townspeople all think he’s murdered his wife he has to address the issue first hand for the first time since the accident.

George has to come to terms with being the objective interest of a trio of hot single babes already on his trail who see him as fair game.

The single women of weld also have him firmly in their sights while he’s having trouble sorting out if he’s ready to engage and move on. One thing is sure his daughter Shey is not alright with this decision.

When they have to move out of their house when they find it is really only standing on one piling with the others about to fail, they move into the local tired motel, George discovers it is owned by his old rival for surfing status when he was a kid. Nicknamed ‘The Orca’, and with his best days of surfing behind him, George’s arrival perks his old rival up. While clashing temperaments, they soon find themselves locked in a competition to find out who’s the best surer.

George has been taking lessons from Hannah a surfing guru in Weld. Come the day however, he is very un-confident about how embarrassing the meeting may turn out to be. Especially when the entire town adjourns to the seashore, putting up tents and bringing out a feast to turn it into an excuse for a celebration.

Woody shining with wisdom gives George a pep talk about ‘beating the Orca’, which he doesn’t manage to do.

George gives The Orca, a near broken man back his life, and this endears him to everyone, including his ‘women’.

Will George be able to make the fresh start he craves. Is it his lifetime opportunity to get out of the rat race? And just what are the ladies true intentions. Only time will tell, but in the meantime, 800 Words is off to a sporting start

A ratings success tapping into all our escapist fantasies, if you haven’t watched 800 Words to date be sure to catch up quick.

There are many reasons why this is now Australia’s favourite new show, discover them for yourself.