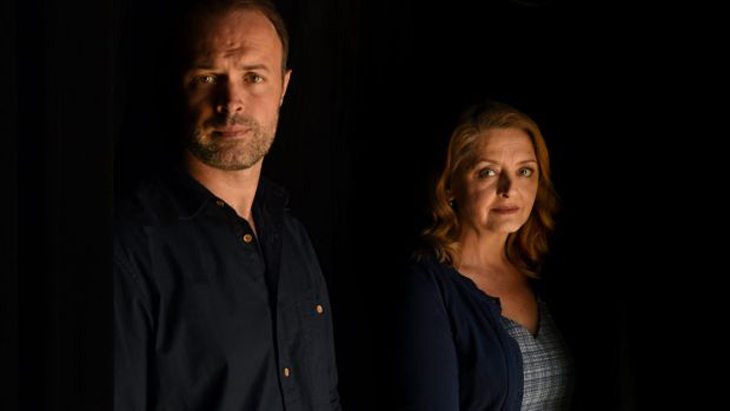 What an amazing decision by producer, director, dramaturg Dino Dimitriadis, in association with Red Line Productions to include The Shadow Box by Michael Cristofer in the 2016 season at the Old Fitz Theatre Sydney.

Dino Dimitriadis explained the choice “it’s a beautiful piece and I instantly knew that it needed to be produced. It is an elemental story that charts the triumph of the spirit as the body deteriorates. It transcends time and place to boldly ask the questions we spend a lifetime avoiding. It urges us to be brave, naked and loving because ultimately life is ephemeral. Although it’s an emotional play, it’s quite funny too but most importantly the play is a celebration of living.”

It is astonishing to think that this is the first production in Australia as The Shadow Box was the winner of the Pulitzer Prize for Drama and the Tony Award for Best Play in 1977.

This compassionate and compelling dramatic triptych is written with sensitivity and wisdom belying the age of the playwright at the time. The language and dialogue of Michael Cristofer is perceptive and carries universal truths about life, dying and the ethereal shadow between. The gripping subject matter is lightened by comic elements that lay bare the fragility and optimism of the human spirit. The drama follows three terminally ill cancer patients Joe (Mark Lee), Brian (Tim McGarry) and Felicity (Fiona Press) as they confront their fears while dwelling in three separate palliative care cottages located in the grounds of a large hospital.

The Director Kim Hardwick has been innovative in her elegant use of the small stage space with the precise placement and movements of the cast and the clear delineation of the independent stories. Jeanette Cronin and Mark Lee in The Shadow Box, Photo by Robert Catto

The high calibre of the professional performances is nurtured under her vigilant guidance and prudent direction. She has intelligently and diligently created an artistic unity that was riveting to witness.

She has been ably assisted by Isabel Hudson’s lyrical and symbolic stage set. Five pines trees were suspended above small mounds of earth. The tenuous nature of life and death is beautifully mounted in the space between trunk and soil.

The exquisite and tender metaphor was strengthened by a lingering grey haze billowing in the theatre. An assortment of seven wooden chairs was judiciously spaced across the minimalist set design.

Lighting Designer, Martin Kinnane produced a contemporary ambience with the mellow glow from the back lighting of the white scrim wall square. This evoked a motif for the light of life and the dark shadows of death.

The play began with the voice of the off stage Interviewer (Jackson Blair West) gently coaxing Joe. “Joe? Can you hear me?”

The Interviewer never appears on stage but his presence is an integral structural feature of the play’s intention. His intuitively framed questions and gently delivered vocals at times elicited reluctant responses that made unsettling connections in the patients’ lives. The Interviewer humanly and compassionately was trying to expand knowledge and understanding of these patients to assist future terminally ill people. He not only supported current patients in accepting and understanding the frightening situations they faced but his delicate communication with Agnes the daughter of dying Felicity was movingly articulate.

Joe (Mark Lee) conveyed the pathos of his situation with unexpected cheerfulness slowly and thoughtfully guiding his unwilling wife, Maggie (Jeannette Cronin) to accept his fatal prognosis. Their dire situation was intensified by the imminent need to disclose Joe’s fate to their teenage son Steve (Simon Thomson).

The family bonds of love were attested in the brilliant and persuasive performances of the three. Jeannette Cronin was totally convincing as the strident Maggie masquerading her grief, uneasy and tentative about letting go of the certainty of having the husband she loves back home. Joe’s temperament offered a soothing balance and required the skilful performance by Mark Lee to deliver an intimacy that was deep and real.

Tim McGarry plays Brian, the terminally ill patient in the second story. His former wife Beverly arrives clad in all the jewellery her lovers have gifted her. She exudes a roguish charm and is a vivacious gregarious and a playful party women. However Kate Raison’s subtle touch amid her extrovert’s antics allowed her love and grief to surface.

The pair poignantly and truthfully communicated life, love and its ambiguous situations. The humorous nature of the dialogue and actions dissipated the tension and reflected the spirit of human optimism and hope. Mark Lee and Simon Thomson are a father approaching his death and the son he hopes to help cope with the loss. Picture: Robert Catto The third terminally ill patient Felicity is a seasoned strong willed woman who has lived a hard demanding life on a cattle farm raising two daughters on her own. Her condition has deteriorated, she is confined to a wheelchair and her prognosis is exasperated by her dementia.

Fiona Press conveyed the static state and the vacancy of her world narrowed to silence and surrender, with discretion and a cautious acumen.

Felicity is cared for by her long suffering daughter Agnes who carries a burdensome secret to protect her mother and keep the dream alive about the favoured daughter Claire.

The sadness within this relationship is palpable and Ella Prince’s breathtaking Sydney stage debut performance drew the audience into her character’s pain and the emotional turmoil. Ella Prince shared what it is to be a human being and the piercing suffering of rejection coupled with the power of grief. Her speech in Act Two was a theatrical transformation. Jeanette Cronin and Mark Lee in The Shadow Box, photo by Robert Catto

The Shadow Box is a literary play that was bought to life by a cast of highly respected actors who immersed themselves in this confronting subject to create real absorbing drama. It was a stirring and gripping theatrical experience as the audience was closely connected with each actor in the intimacy of the Old Fitz Theatre.