The towering Mountain Ash Gums of the Dandenong Ranges

Less than an hour from Melbourne by car lie the Dandenong Ranges, a beautiful area of low mountain ranges with a unique variety of picturesque towns and villages, homesteads and gardens to visit, the perfect destination for a day out from Melbourne City.

The first time I visited the Dandenongs, I quickly declared that it was ‘my favourite place in the whole of Australia’. This feeling has not changed. Every time I return my opinion is confirmed, as I discover more and more about this amazing place. A beautiful Hydrangea of the Dandenong Ranges, captured at the Alfred Nicholas Gardens

As the suburbs of Melbourne are left behind, the landscape swiftly changes, to winding roads and towering Eucalyptus trees. It feels as if we are transported to another place and time, and this has an instantly calming effect. Quaint little cottages sit snuggly beneath the trees, and I begin imagining a move here, for a quieter life, tending to a garden of Hydrangeas and Camelias. Dotted throughout the Dandenongs are pretty little towns, including Olinda, Kallista and Sassafras. Sassafras is a personal favourite of mine, and has a number of lovely boutiques, along with some great cafes for a bite to eat.

Ripe Café offers a wonderful range of tasty treats, from baguettes to risottos as well as a delicious variety of cookies and cakes. I have made a habit of stopping here each time I venture to the area, and am never disappointed.

The landscape of the Dandenong Ranges is not what might immediately spring to mind when one thinks of the Australian bush – it has a lush, dark and cool feel, rather than a dry and dusty scene – but at the same time, this landscape is quintessentially Australian. The majestic Mountain Ash Gums, as seen in the Dandenong Ranges

The forest of trees, providing a canopy of shade from the summer sun, is comprised of Mountain Ash Gums, Eucalyptus regnens, a gum tree native to Victoria and Tasmania, and the second tallest tree in the world, after the Californian Redwood. These Mountain Ash Gums, also known as Swamp Gums and Stringy Gums, average up to 85 metres in height (279 feet), and have a wonderfully majestic feel. I am awe-inspired whenever I stand beneath them.

Nestled at the feet of these gentle giants is a variety of lush green foliage, including a number of types of ferns, primarily the soft tree fern (Dicksonia antarctica), the rough tree fern (Cyathea australis) and the slender tree fern (Cyathea cunninghamii).

There are many tracks and trails to follow through the vegetation, and these are easily accessible from picnic areas and carparks.

One such walk is through Sherbrooke Forest, an easy walk from the O’Donohue Picnic Ground, approximately 2.5 kms for the round trip.

This is a pleasant 45-minute stroll beneath those wondrous Mountain Ash Gums and tree ferns, and includes a sighting of the Sherbrooke Falls. The picturesque walk through Sherbrooke Forest

Another spectacular walk, close to Sherbrooke Forest, is through the Alfred Nicholas Memorial Gardens. As well as many magnificent Ash Gums and ferns are a wonderful array of exotic plants which result in an ever-changing garden – Winter sees the Camelias in flower, and during Spring the Azaleas, Rhododendrons and flowering cherry trees provide pretty colour. During the Summer, Hydrangea, Fuchsia and Orchids can be seen, and then in Autumn there is a riot of vibrant colour, with the intense yellows, oranges and reds of the Maple and Beech trees, as well as the stunning Golden Gingkos and the picturesque lake, a popular spot for wedding ceremonies.

This garden was created by Alfred Nicholas, who along with his brother developed the Aspro painkiller formula, and patented just after the First World War.

Nicholas purchased the area of land in 1929 and had the Art Deco masterpiece Burnham Beeches built on it during the 1930s. 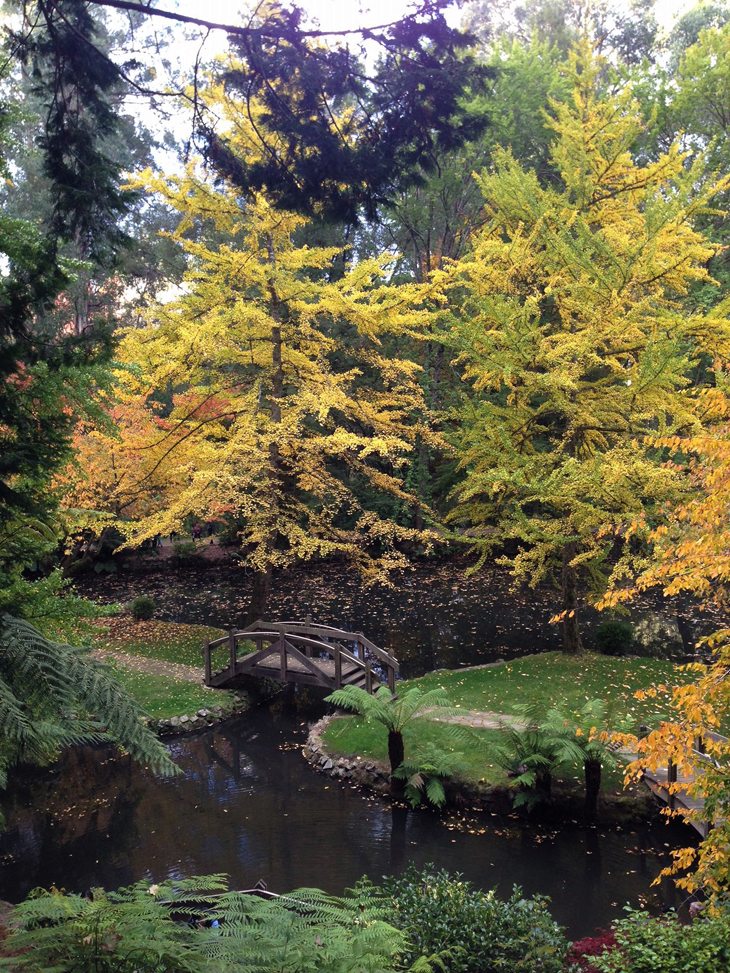 The ethereal Lake and Autumnal colours at the Alfred Nicholas Memorial Gardens, Sherbrooke

Nicholas also created the gardens from scratch, which include a lake and a number of rock pools, carefully researching appropriate species to plant, and travelling far and wide to find exotic varieties.

Unfortunately, in 1937 he died prematurely, and whilst most of the planting had been completed by then, the gardens fell into decline.

Over time, the house was utilized as a Children’s Hospital and then a research facility, but this also fell into disrepair during the 1990s. The garden is now under the care of Parks Victoria, who carried out a major restoration in the late 1990s, to create what can be seen today.

Burnham Beeches is currently undergoing a signification restoration, overseen by Adam Garrison, an expert in the renovation of large scale heritage buildings, and Shannon Bennett, one of the best known chefs in Australia, and owner of Vue de Monde, one of the most highly-regarded restaurants in the country. The Art Deco marvel that is Burnham Beeches is set to shine once more, with plans to provide 6-star luxury hotel accommodation opening in 2018, alongside a plethora of boutique facilities, including a microbrewery, a vegetable garden, an emu enclosure and 16-cow milking shed. The Piggery at Sherbrooke serves a delicious afternoon tea

A café, housed in the former piggery, and appropriately named The Piggery, is now open, and serves breakfast, lunch and the all-important afternoon tea.

Eating, walking, relaxing, away from the city centre in the cool shadows of the Mountain Ash Gums, these are just a few of the lovely activities on offer in the Dandenong Ranges.

The Cairo Genizah fragments are an accumulation of Jewish manuscript fragments in the Bodleian Library at Oxford. They are now online, so they can be studied by scholars and all of those with an interest in the rich heritage of the Jewish tradition.