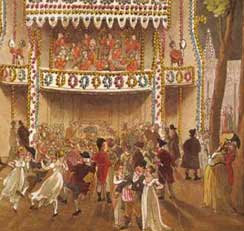 To gape at the antics of the beau monde was one of the great pleasures of Vauxhall Gardens at London during the eighteenth century. They were a great lark in the dark occupying 12 acres across the Thames from Westminster Abbey. Class distinction didn’t apply and everyone promenaded its paths and byways wanting to see and be seen. The ton, or fashionable, thought it dangerous and glamorous. Pimps, prostitutes, ruffians and rascals saw it as a place to earn a good living. Those neither haute nor bas but middling people, believed it exciting. To coin a real Georgian phrase, it was a great gaze. Bushes emitted music played by a band, concealed in a hole in the ground nearby, filled with water so often it had to finally be abandoned. Meanwhile the resident orchestra played Handel’s Water Music on a dry stage in the Rotunda for people to dance.

Wondrous works by Masters of Modern Art from the Hermitage Museum St Petersburg in Russia will go on show at Art Gallery of NSW, 13 October 2018 to 3 March 2019