Why here we are again, it’s hard to believe this is the last Fashion Elixir for 2014.

Usually I will wax lyrical about all the fabulous trinkets I covet and what may be waiting under my Christmas tree.

After the events that unfolded in Sydney, Australia on Monday the 15th of December 2014, I must be honest and say I would feel very shallow to prattle on about designer goods. I felt strongly that I should share my feelings instead.

It was a very stressful 17 hours for Sydneysiders, with the very sad situation that unfolded at the Lindt cafe in Sydney’s CBD.

When we should have all been taking in the beautiful lights of the stunning tree that takes pride of place in the heart of our special city in Martin Place, we were sitting in vigil by our radios or television screens.

We should have been listening to carols or Christmas shopping, but instead we were praying in our own way for the seventeen hostages that were just going about their daily routine, one that many of us follow.

The scene that unfolded was a difficult one to fathom, an unimaginable one for the family and friends who had loved ones inside.

How does one brace themselves for experiencing such trauma? 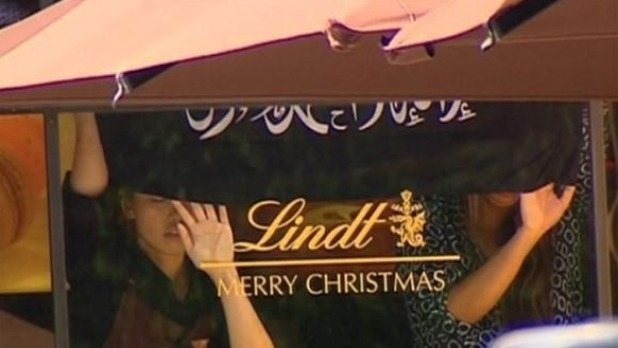 The next morning when I woke to hear that the siege was over, and that sadly the outcome was two of these innocent people had lost their lives, something wonderful happened.

Aussies rallied together as Aussies do when the chips are down.

At first one lone bunch of flowers was placed close to the scene.

This was followed by another, and another. Soon there was a sea of beautiful living blooms as tribute to these brave souls who, like all of us on a Monday morning had only gone to grab a quick coffee on the way to work.

The feeling was one of great shock and sadness, but also solidarity.

Another heartfelt initiative was launched by one woman.

Rachael Jacobs on sharing a train carriage in Brisbane with a Muslim woman, who had decided to remove her head scarf (one can only assume as not to stand out on hearing of there siege), felt a gamut of emotion.

Why had this woman felt the need to take off her scarf? Not wanting to appear patronising, Rachael offered to walk with her as they happened to get off at the same stop.

There is something very emotional about offering your help to a stranger.

I remember travelling home many months ago, on a train in Sydney, as I do quite frequently.

A heavily pregnant woman got on to my carriage, she happened to be Muslim. I could see she was looking for a seat.

Nothing unusual after a hard day of work, and I imagine very tired feet, legs and back on walking for two.

There were seats on that train, but she wouldn’t sit down.

As I looked around I realised that all the available seats were shared with men, none threatening, all just your average guy.

What I do know, is that it culturally for some women of the Islamic and other faiths, it is frowned upon for them to sit next to a male not related to them.

This was going through my head when I looked at the person beside me, a woman.

As the pregnant lady was about to leave the carriage I leant forward and tapped her on the shoulder, “would you like a seat?” I asked.

At that moment we exchanged a look that said many words, and she kindly accepted my offer.

I remember how I felt, flustered and slightly embarrassed, just as Rachael said she did, not wanting to seem patronizing.

Would I have felt that way if the carriage was full and I had done the same for any other woman with child?

#illridewithyou started after Rachaels’ Facebook post was shared by her friends, now over thirty thousand people have shared the hashtag.

Sharing a ride with a Muslim woman so she can feel safe will show the community that we realise it was a lone gunman that was the perpetrator, not a religion. We need to remember that, as unfortunately Muslim women are easily identified by their headwear.

This to me is part of the true humanitarian spirit, what any religious or cultural celebration should be about, at any time, not just Christmas. To quote the ancient Greek philosopher Aristotle “The whole is greater than the sum of it’s parts”.

At the end of the day we have the same physical makeup.

A brain, a heart and hopefully a conscience, and this is what makes us human.

We have to remember this.

We all have the same emotional makeup.

Hopes and dreams, loves and losses, fears and joys. This is what makes us human.

We must hold these principles dear to our hearts, or we will cease to be human.

If we don’t, that will be our biggest downfall.

I believe in the goodness of humankind, I have experienced it first hand.

A kind heart and a good soul are the two most fashionable gifts anyone can own, but also the easiest to attain and to share.

They don’t cost money but they do take some careful nurturing, which is why we need to be kind to one another not only this Xmas, but all the time.

It is undoubtedly the best gift you will ever give.