A Life In The Theatre a play by David Mamet, first opened at the Goodman Theatre in Chicago in February 1977. Then a slightly adapted version debuted in New York in October of the same year. Edith Oliver expressed a very optimistic and pragmatic opinion about this version in the New Yorker.

“Mr Mamet has written – in gentle ridicule; in jokes, broad and tiny; and in comedy, high and low – a love letter to the theatre. It is quite a feat, and he has pulled it off.”

Judging by the audiences’ reaction at the Eternity Playhouse, Sydney, it is still as relevant and as funny in 2016. It is a celebration of theatre life with all its idiosyncrasies, successes and catastrophes, and highs and lows, and the season runs until December 4, 2016.

The play takes us inside the working world of theatre actors, one from another time an older experienced professional, the other a younger actor from a more contemporary era. They had distinctly different approaches to performing on stage.

The audience was privy to plays within a play as the two actors shared their diverse stage roles. This was creatively staged by designer Hugh O’Conner who placed the ‘stage’ at the back so the actors portrayed there stage roles within the play with their backs to the audience. This design approach was innovatively effective and also intriguing as the audience could view their performances via video on the backstage monitors. The Creative Team for this production is exceptional. Helen Dallimore directed the play relishing her role, interpreting the script with integrity, defining the style and mood with precision and the pace and arc of action with intelligence and vision.

Lighting Designer Christopher Page meticulously captured the mood and the changing scenarios and times within the play. This was crafted with an astute sensibility that made transformations appear smooth and effortless.

However the Sound Designer Jed Silver’s intelligent choices of music and sound effects were crucial elements for connecting the multitude of scenes. His wise selection ensured fluidity within the play. Audience interest was sustained and a playful sense of fun pervaded. 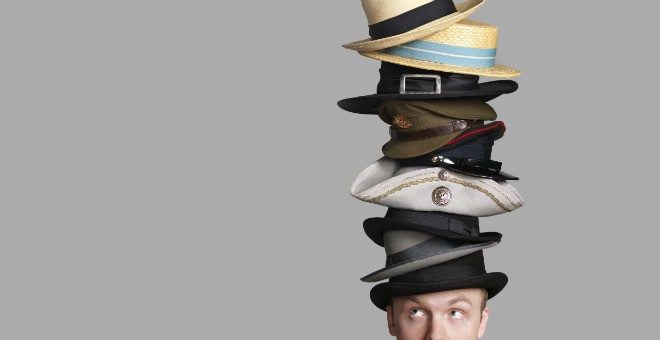 The costume changes were countless and the intervening music was the means for guaranteeing the play’s continuity and cohesion.

Amy Morcom was an astonishingly versatile Stage Manager as she moved on and off stage transporting props, discarding costumes and assisting with Robert’s costume changes. Her energy was boundless and her movements purposeful and subtle.

Her function almost merged into an acting role, certainly a significant stage presence that required physical stamina, accurate timing and a precise memory. She was unrelenting performing this daunting role with calm assurance and confidence.

David Mamet’s personal experience as an actor gave insight and credibility to the play. It also reflected his respect and admiration for the artistry of acting and the phenomenal demands of the profession. The two characters in the play are Robert (John Gaden) a seasoned thespian and John (Akos Armont) an up and coming younger actor. These two exacting roles demanded the highest calibre of performance and both were sensational.

Not only were they playing diverse roles on stage but they were required to make countless costume changes and move various props on and off stage. They both had flawless timing and employed impeccable pausing to achieve the play’s intentions.

The opening scene began backstage with the two actors in conversation reflecting on the opening night’s performance. Robert compliments John on his performance and this is the beginning of a mentoring process that occurs throughout the play.

The banter between the two actors initiates a friendship as they analyse all aspects of the performances. There is tenderness when John gently wipes stage makeup off Robert. However like all friendships moments of hostility and jealousy arise. At times Robert’s mentoring is bombastic and as the play progresses cracks seep into Robert’s performances. However John emerges into a mature and skilled actor. 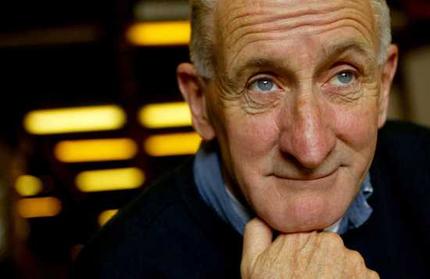 John Gaden uses gestures with the ease and intuition of a veteran performer. His extensive proficiency shone in the mobility of his facial expressions, the subtle movement of his eyes and the decisive turning of his head.

There was fluidity in the way he used the language of the play and his body. His kindly lovable face exuded charm and confidence with his craggy features, strong chin and chiselled nose. His elegant stage presence and facial ambience conveyed Mamet’s text with the authority of total character immersion. 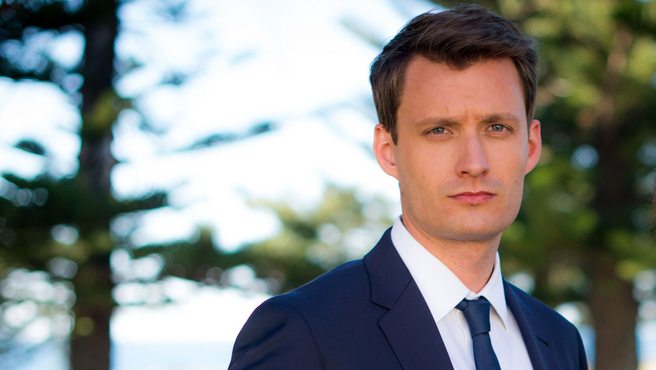 Akos Armont oozed naturalness in his character that was engaging to observe. In his role he was able to give empathy and respect to the senior Robert, a faultless testament to his skills and insights into human behaviour.

His strong, handsome physical charisma was enhanced by an agile use of his body as he moved in and out of characters delivering their varied nuances with style.

The rituals of theatre life, the jokes, comedy of errors, the intimacy of intense theatrical relationships and the lonely moments were explored with compassion in this narrative of life in the theatre.

Incidents such as the window frame’s arrival well after cue and then hung too low and finally dropped was hilarious to watch. As Robert delivered a sombre speech the flag waved inappropriately across his face another moment of comical confusion. 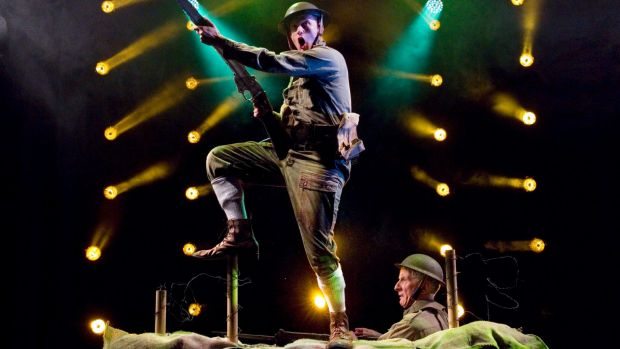 A Life In The Theatre was made all the more real by the passion and professionalism of the cast, creative and production teams who had immediate and personal experience of the play’s content.

This two hander was expertly concluded as Robert bade “goodnight, goodnight, goodnight.” He stood momentarily on the vacant stage connecting with the audience through the way he tilted his head and used his body and eyes. He conveyed the care and grace of a gentleman with style, flair and panache.

A Life in The Theatre
Eternity Playhouse
4 November – 4 December, 2016

Nestled in the hinterland behind the Gold Coast in south east Queensland is the Tamborine Rainforest Skywalk, reports Rose Niland, in a detailed sky high review