I was definitely in the mood to relish renowned Sydney-based group Dr V’s Swing Thing when they returned to perform at A Little Lunch Music. The 20-piece band took the audience on a memorable journey through the different elements of jazz.

The buzz in the City Recital Hall [Sydney] was palpable and the band was thrilled to play in this space specifically designed for outstanding acoustics where the focus on quality of sound enhanced the enjoyment not only of the audience but the band and the soloists.

Jazz musician JJ Johnson voiced in an interview in 1988 that “jazz is restless. It won’t stay put and never will.” 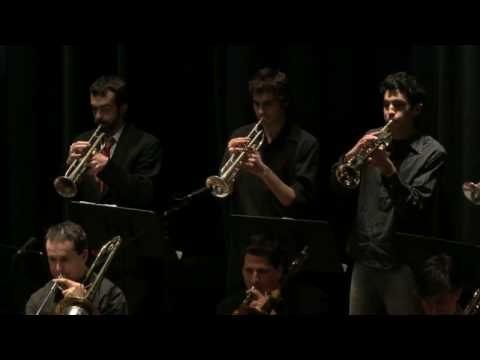 The diversity and enigmatic nature of jazz was explored in this sensational concert. The remarkable technical and creative ability demanded by jazz was showcased by Dr Vladimir Khusid, the band and the soloists.

Vladimir Khusid was born on the coast of the Caspian Sea in the capital of Azerbaijan, Baku. At five years of age he started his musical education playing the violin and later switched to the trumpet to play jazz. His professional career began at age fifteen in the jazz scene of the former Soviet Union. He travelled across Russia with a variety of jazz bands.

In 1980 Vlad emigrated to Australia and in 1981 he joined the Sydney Conservatorium Jazz Program under the tutelage of many distinguished jazz teachers including the celebrated Don Burrows. He had diligently provided pedagogical guidance and generous encouragement to these busy professionals and fine musicians.

Vlad also entertained the audience with his warmth and humorous remarks that reflected his love and respect of the band members. Alan Menkin’s Beauty and the Beast opened the Program. The tinkle of the piano, the melodious brass and the unmistakable jazz beat was gloriously freeing and enormously pleasurable. The strong lively beat pulsated and spiritedly affected the continuity of the jazz arrangement of the composition.

I responded to the warmth of jazz and felt it’s a universal language that was accessible to everyone.

I loved the laid back style of the band conductor Vlad, his knees bending with the beat, his head swirling with the rhythm and his arm jerking with enthusiasm. He ambled on and off stage with subtlety and a deep, well deserved confidence in his band.

Next Michael Kluger a Sydney based accordionist, pianist, concertina-player, bandoneonist and arranger arrived on stage and espoused the musical genius of Argentinian composer Astor Piazzola. He conveyed to the audience that Astor Piazzola was responsible for inventing a new genre of music. He revolutionized the traditional tango into a new style termed Nuevo tango, incorporating elements of jazz and classical music. Jo Fabro, in the groove

A quarter of a century after his death he is so popular that his compositions are performed by mainstream-artists across the world. The drums began with the accordion joining in and a touch of melancholy evolved. I could imagine the movements of a tango dancer as dangerous passions permeated this exciting performance.

Then Jo Fabro, a dynamic young Sydney jazz singer joined Dr V’s Swing Thing to perform two numbers. The first song was Carl T Fischer’s Will Be Together Again. Jo’s smooth, slow wistful start “no tears, no fears, remember there’s always tomorrow” reeled the audience in and emotions welled and lingered lovingly in the notes and lyrics. “Try living with your heart” continued Jo with a rich honeyed voice crystal clear enunciation that maintained the romantic warmth and emotive roundness of the jazz voice.

Her second song Irving Berlin’s, Blue Skies she introduced as being not only one of her favourites but very appropriate after the devastating weather that plagued Sydney recently. The happy bouncy beat was enhanced by Jo’s distinctive jazz voice and her perceptive phrasing.

The audience was fortunate that Vladimir Khusid played the flugelhorn, [a rare solo] for Bert Jones’s For the Time Being. I felt there was something exceptional about the generosity of sharing his talent with the band and the audience. The dynamics and texture conveyed in his performance were deeply uplifting and his sensitive interpretation reflected his virtuosity and creativity.

His playing challenged the audience to feel and engage with the emotional resonance of the music. A change of pace was echoed in the very contemporary American guitarist Pat Metheny’s composition See the World. The melodious sophisticated rhythm was sympathetically revealed by the band.

The solo tenor saxophonist delivered a flawless tone and an intuitive musical performance. The notes slither and slide effectively, jump and bounce with precision and swirl and twirl when executed by a brilliant musician. His playing vibrated with the essence of jazz.

In Enrico Rava’s Diva the dialogue between drum and piano was mesmerising and this built to a climax with the whole band. This performance felt like a narrative where the characters were embedded in the instrumental sequences that revealed orientation, complication and a very effective resolution. The pianist throughout the concert sympathetically accompanied the band with at times a subtle and delicate feel for dramatic precision.

Prior to the last performance Vlad shared his delight in dealing with these intelligent young men in the band and he articulated that “I’m in good hands.” By sharing very personal touches with the audience it created a more intimate and fulfilling concert.

John Clayton’s, Soupbone was more typical of the swing tunes Dr V’s Swing Thing usually performed. The twenty musicians interacted with one another through what they played and the expression of the substance of fine jazz. The spirit of jazz relentless with punctuation and fervour made me feel fortunate to be alive and even more appreciative of this style of music.

Enthusiasm is a basic ingredient and it has its origin in a love for the music of jazz. This enthusiasm connected performers and audience in a concert where we all strongly supported Duke Ellington’s conviction: “It don’t mean a thing [if it ain’t got that swing].”

Outlander Series 4 begins with Jamie and Claire discovering, through dramatic events, how difficult life as an immigrant really is when past and present collide