Music emerged from the cocoon of winter and unfolded the wings of spring at this glorious celebration of the oldest musical instrument of all, the voice.

Recently The Song Company performed at A Little Lunch Music in the City Recital Hall in the heart of the city of Sydney. This a cappella (in the style of the chapel) ensemble, of six expert singers, honoured the powerful traditions and musical versatility of the voice.

The function of a clear vision permeated their performance and underpinned The Song Company’s outstanding national and international reputation.

The Song Company is Australia’s leading vocal ensemble. It embraces music from around the world and across the ages.

In collaboration with artists of the highest calibre, it aims to create a distinctive and dynamic new voice, relevant to audiences of today and tomorrow; a cappella groups sing without musical accompaniment, thus depending on voices alone. This astonishing concert exhibited the capabilities and instrumental resources of The Song Company’s musical expertise and passion. They sang with a transparency and clarity that exemplified the a cappella style of musical performance.

Their musical repertoire is extensive and coupled with a matching proficiency that has been nurtured and developed for over thirty years.

The Song Company’s repertoire covers vocal music from the twelfth century to contemporary classical works and is exceptional in its stylistic range.

Roland Peelman, Artistic Director since 1990 introduced the concert making direct references to the changes in the air that heralded in the season of spring. Bird’s twitters and coos eloquently broadcast the news.

The singers individually walked up the aisles of the auditorium echoing the season’s sentiments in Sumer is icumen in, also called The Cuckoo Song.

The bird calls glided and hovered with the musical character of spring and the innovative entrance created an ambiance of pure joy for both the audience and performers.

The City Recital Hall’s acoustics enriched the quality of sound of the ensemble as they elegantly glided and alighted on stage singing this rota that is ‘the oldest known musical composition featuring six-part polyphony (Albright 1994).’

On the other side of the world Spring begins in May and Roland Peelman invited the audience to think September not May. English composer William Byrd’s madrigal, This Sweet and Merry Month of May, was composed in 1590 and soared with the lyrical harmony, fervent and reverent characterisation, and pure transparency of sound and enunciation that identifies the voices of The Song Company.

The theme of bird songs was reiterated in ‘There were three Ravens‘, an English folk ballad composed by Thomas Ravenscroft and published in 1611. The seriousness of the symbolism in the lyrics was conveyed not only in the words but in the sombre vocal tones where the bass voice of Andrew O’Connor intensified the mood.

Choreographed movements complemented the singing of When the Cock begins to Crow attributed to English composer Henry Purcell (1659-1695).

The light relief of the drama and comical innuendo of the song fluttered in their voices.

The repetitive motif of the rich rounded sound of cuckoo, cuckoo circled and drifted in the group’s performance of The Nightingale by English composer and organist Thomas Weelkes (1576-1623).

‘The Cuckoo is the bird that bears the Bell.’ There was enchantment in the Hall when the word bell was sung, it rang coherently and became the bell. The tinkling chime of the bell was voiced in song by the ensemble.

The beautiful light and shade of their unique voice qualities and textures was perceptively unified by the sympathetic conducting of Roland Peelman especially for Of all the birds that I do know by John Bartlet.

His arms and hands fluttered leading the group to perfection in Thule the period of cosmography also composed by John Weelkes. The wondrous beauty of the sounds and images of nature were liberally dotted with variation in the powerfully poignant lyrics.

The poetry inspired by the Australian bush was strikingly introduced by the spoken word first then smoothly transferred to the song. I loved the interplay between the questions of the ladies and the replies from the gentlemen when ‘Willy wagtail sings at night.’

The rich melodious voices quivered with emotion and were seeped in a seemingly effortless cohesion. 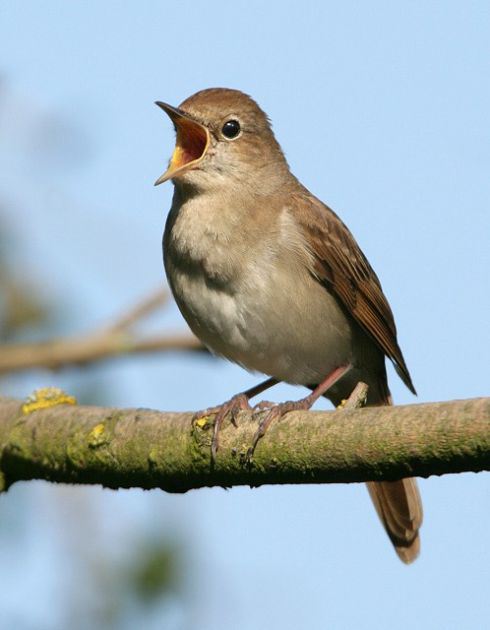 Photo of nightingale by Nigel Blake

The final two songs began with John Lennon and Paul McCartney’s Blackbird where Hannah Frasers’ Whistles created a melodious song and sent shivers down the spine.

Wistful vocal textures and romantic nostalgic intonation gently ruffled the feathers of the audience with The Song Company’s mesmerizing performance of A Nightingale Sang In Berkeley Square.

Tears welled, emotions gurgled and a pause of complete stillness perched on the audience as they comprehended the sheer beauty of the interpretation and interdisciplinary skills so exquisitely achieved by the ensemble.

The audience was nested in the soft down and warm feathers of the caressing sounds of beauty. The Song Company had spread its wings of uplifting musical voices and embraced the call of spring.