“Pugin is the Janus of the Gothic revival: his buildings look back to the picturesque past, his writings look forward to the ethical future’*

The Gothic is always with us. Indeed Kenneth Clark whose essay on the history of the style charted its revival in the nineteenth century, showed its ability to survive through periods not usually associated with the pointed arch and cusped ornament. At the end of the twentieth century, perhaps as a reaction against the brutalism of modernist architecture and the anonymity of our cities, there was a revived fascination with the Gothic as a style and a renewed interest in Augustus Welby Pugin (1812-52) one of its greatest theorists and a forceful proponent of Gothic decoration. Pugin’s influence was felt on a generation of Gothic revivalist architects, the most famous being Gilbert Scott, and his own plans and designs were realised in both Sydney and Tasmania.

Pugin in his book, Contrasts, published in 1836, sought to compare the ‘noble edifices’ that embellished the ideal late medieval city with the dreary structures that dominate the nineteenth century factory town. His aim was ‘showing the present decay of taste.’ Dreaming spires have given way to smokestacks, grass has been replaced by the gasometer and the principal civic structures appear to be the asylum and gaol. 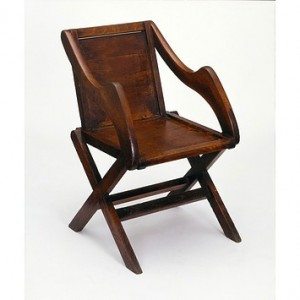 Pugin’s aesthetic didacticism and his romanticised attachment to the middle ages irritated many of his contemporaries, but he brought to the design of tiles, wallpapers, furniture and ironwork principles of design and authentic construction that pointed the way forward for William Morris and others in the Arts and Crafts movement who came after.

The decorative arts were never considered secondary by Augustus Welby Pugin. As an architect he might design the structure of a house, church or institution, but he conceived of the building, its fittings and furnishings as a ‘complete work of art.’ His early training and experience had been as a furniture designer.

When, after a fire, part of Windsor castle was rebuilt during the 1820s in the Gothic style he had produced designs for rosewood and gilt furniture to fill its halls. Then, following the decision of the British parliament to rebuild the Palace of Westminster in the Gothic style, after it also had been destroyed by fire in 1834, Pugin assisted Charles Barry on the massive project for many years and designed furniture, tiles and wallpapers to embellish the building 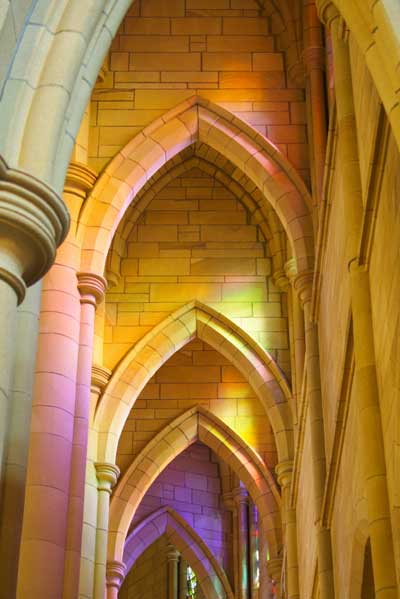 Ambulatory in St John's Cathedral at Brisbane, Queensland Australia the last Gothic Revival style cathedral in the world to be completed. Designed by John Loughborough Pearson an admirer of Augustus Welby Pugin

Despite his professed abhorrence of the industrialized nineteenth century Pugin was commercially minded enough to realze that the Great Exhibition of 1851, held in London’s Hyde Park to showcase British arts and manufactures, offered him an incomparable opportunity to bring his work to the attention of the buying public. The ‘Crystal Palace’ of Iron and Glass was the least sympathetic of settings for a display of Gothic inspired ecclesiastical ornaments and domestic furnishings, but within this large greenhouse Pugin created an exotic Medieval Court that was to have a significant influence on public taste.

Rich fabrics and papers caught the eye while signs advertising the wares of the craftsmen who collaborated with Pugin hung amidst heraldic emblems. John Hardman of Birmingham, who made brass, iron and gold work to Pugin designs, displayed his door hinges, chandeliers and fire dogs; George Meyers set out his furniture and carved architectural details, and John Crace showed his carpets and paperhangings. For Pugin arts and crafts were complementary. He extolled the virtues of the medieval craftsmen and attempted to resurrect their original processes. Bringing an antiquarian knowledge of Gothic ornament into conjunction with his own powerful design sense, and drawing upon the skills of nineteenth century workers, he was able to produce a range of new Gothic wares- furniture, wallpapers and ceramics.

From the eighteenth century furniture in the Gothic style had been available from most prominent cabinetmakers, and many patternbooks offered a variety of designs ranging from the more historically correct to fanciful adaptations and even exotic hybrids of Gothic and Chinese design. What Pugin sought in his Gothic Furniture in the Style of the Fifteenth Century (1835) was an almost archaeological correctness. Pugin also saw his furniture as part of an overall scheme for interior design but the different needs of the nineteenth century and the lack of useful models for certain pieces saw him freely adapt and interpret ornament taken from a variety of sources, often Flamboyant French or Flemish Gothic. An octagonal table designed by Pugin for the Palace of Westminister, for example, has no medieval prototype behind it. In this case Pugin takes ogee arches from late Gothic architecture to support the board. The polychrome decoration of the lower area of the Sainte Chapelle at Paris, recently restored by Eugène Viollet le Duc, as well as rich late medieval textiles, were major influences on Pugin and on John Crace the interior designer who executed Pugin’s lavish schemes, which he elaborated from sketches. Because hand painted wall treatments were so expensive to attempt Pugin and Crace created wallpapers for the interiors of Eastnor Castle, Herefordshire and Lismore Castle, County Waterford.

They also employed such papers in the Palace of Westminister where enormous walls had to be covered. Pugin favoured stongly patterned wallpapers in a richly ornamented style.He sought a two dimensional medieval flatness and avoided attempts at false perspectives that might be suggested by shading.

For Pugin the pattern of forms and repeated devices were enough and he sought to create his effect using striking contrasts of colour. He also took a great interest in natural forms as his 1848 publication Floriated  Ornament shows and this allowed him to create sophisticated patterns based on stylised flowers such as the lily or the cabbage rose. For the Palace of Westminster alone Pugin designed over one hundred different wallpapers utilising Italian textile designs, traditional English motifs such as the Rose and Portcullis , as well as fleurs-de Lys and Pomegranates.

These papers were block printed in a variety of colour ways but this process was both labour intensive and expensive. However, even today, papers such as Pugins’ Gothic Lily are still being produced in small runs from the original blocks. In a manner that anticipates William Morris, Pugin still believed that the Gothic could be popularised through the commercial production of cheap papers for domestic decoration.While he himself did not live to implement these plans, several wallpaper companies in the 1860s produced Puginesque papers for a wider commercial market. 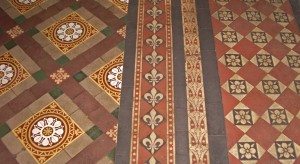 Tiles and ceramics to Pugin’s Gothic designs were produced from the 1840s by the potter Herbert Minton at Stoke-on Trent in Staffordshire. Pugin had a developed interest in medieval ceramics and was particularly intigued by the encaustic thirteenth century tiles in the floor of the Chapter House, Westminister Abbey. It was Minton who developed a means for reproducing tiles by the same encaustic process. He produced a moulded indented base tile and onto this  slip of a second colour was poured to produce a striking two-tone effect.

Pugin did much to popularise the use of brightly coloured tiles, using them to enliven both walls and floors.In the decoration of St Giles Church, Cheadle, Pugin used tiles to create jewel-box effects in small spaces. Some of the tiles placed there were hand painted or overprinted after production. Pugin-designed tiles were used in 1850 to decorate the Palace of Westminster and displayed in the Medieval Court at the Great Exhibition. Later, Minton’s employment of the new Collins and Reynolds process for printing tiles with transfers saw a mass production of Pugin inspired designs. Tableware to Pugin designs was produced by Minton for special commissions and for general sale. A simple printed blue trefoil pattern known in the Minton catalogue as Pugin Gothic, pattern 8659, was produced from mid 1840s down to the 1920s and is much admired. It was for Minton also that Pugin designed a series of multicoloured ornamental plates with foliated Gothic designs and French or Latin mottos.

Most celebrated of all the motto plates, and the most Victorian in its sentiment, is the ‘Waste Not Want Not’ Bread Plate, which dates from 1849. Produced by an encaustic process using inlaid coloured clays, the plate features strong Gothic lettering, the words nicely balanced, stylised foliated bands of ornament and appropriately a wheel of wheat.

Pugin’s legacy of rich decoration documents for us one aspect of the Victorians’ fascination with Medievalism and it finds many admirers. In 1994 the Victoria and Albert Museum’s exhibition, Pugin: A Gothic Passion, drew enormous crowds and the V&A gift shop promptly sold out of the reproduction china and the stationery decorated with Pugin’s designs. It appears that another generation has discovered Pugin’s sumptuous decorative patterns as well as his theoretical writings that find a new resonance in our post-modernist times.

Reality is a figment of our imagination, so if what we perceive is often wrong how can we know what is real or what isn’t* Education + Entertainment can be both encouraging and empowering. Portraying an eccentric, sometimes pompous neuroscientist and out of the box consultant to the FBI, with…