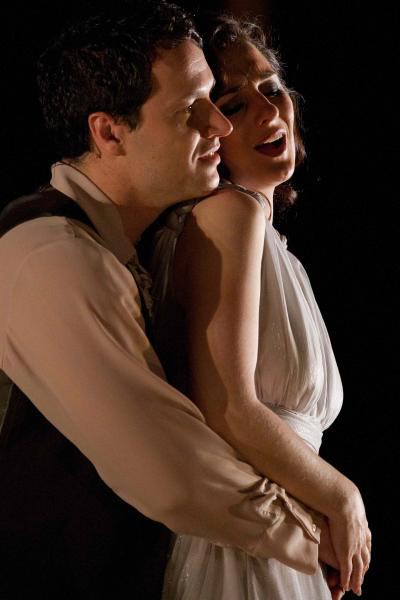 There was a breathtaking moment during the first hour of the 5pm Sunday performance of the Pinchgut Opera‘s 2010 production of composer Franz Joseph Haydn (1732 – 1809)’s  L’anima del filosofo, Orpheus + Eurydice when I became aware of a most beautiful moment of stillness yet attained by any audience I have ever known at the Opera.

It seemed to me as if it was collectively holding its breath so as not to disturb the sheer beauty and depth of the emotional intensity attained in a duet being sung so superbly by the lovers Orpheus and Eurydice portrayed so brilliantly by soprano Elena Xanthoudakis and tenor Andrew Goodwin. Their voices blended into a moment of such perfection that it was truly hard to comprehend and for me, quite literally hard to come to terms with. It felt like dying and going to heaven all that the same time.

It was more than pure poetry in music and, indicative yet again, of the sheer genius of the team of people brought together once a year to produce a Christmas treat for what is now a seemingly very savvy musical audience that makes up the Pinchgut Opera’s growing data base.

They come from all walks of life and backgrounds too. They are not posh, but rather without pretension. They are people who admire and applaud quality when they see and experience it. As well they continue to turn up year after year.  They are an audience of family and friends offering total support and commitment on a level rarely achieved in community.  At interval they can be found tucking into the ice cream in equal quantities to those drinking champagne as they all savour the sugar boost that will help them to continue to hold their breathe through the excellence of the second act. And what a second act this one was to be.

At my stage in life (6 decades plus) I like to believe I have perhaps learned some of its many lessons. One of which is not to have ‘great expectations’, because they are rarely fulfilled. It is hard though, based on past performances, not to have them when you are considering the annual presentation of Sydney’s simply stunning Pinchgut Opera.

Here is a company it is hoped the country offers a commendation to during its tenth year in 2011. It certainly deserves it. As its reputation for excellence grows and the years roll by it will be harder to retain that single minded personalized focus instilled by its founders, which have turned this small company into something quite wonderful and seemingly wise well beyond its years. But then that is just another challenge for them all to surmount.

The intensity and pure delight of this year’s amazing experience accompanied my companions and I out into the coolness of the night air afterward where a pact was made in Martin Place to meet up at the same time next year. It stayed with my girlfriend and I both through dinner with family afterward and, with me as I was drifting off to sleep. It has lasted throughout the two days since, as I went about completing my Sydney birthday odyssey, returning to Melbourne to rise this morning to pen this review. I cannot achieve anything else today, I know, until I write it down. 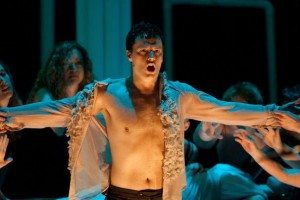 Andrew Goodwin as Orpheus, being manhandled by the Fates

Like many other people of my generation, and the ones who come after, I am aware of some of the musical moments of eighteenth century composer Franz Joseph Haydn, but certainly not his opera. And, he was well down on my list of favourites, well at least until this weekend. This opera was not ever performed during his lifetime, which must have been a huge disappointment for him. It was written under the prevailing mood and atmosphere of the European enlightenment, which helped him to craft it continuing the enduring legacy of an ancient tale about love.

There are many moments in this piece, which are far and above and quite apart from any other music that I know Haydn ever composed. It is a work that combines profoundly beautiful deep moments such as can be found in dramatic music by Beethoven, while its lyrical qualities echo that of the maestro himself, Mozart. Haydn and Mozart were good friends. They dined together on the 15 December 1790 until Haydn boarded the stage coach, which was to take him to London and toward new adventures in music. Reputedly Mozart said as he left ‘We are probably saying our last adieu in this life’. Haydn was deeply moved and tears welled in both their eyes as they said their farewells. And, in just under a year, Mozart was dead.

Haydn arrived at Dover on New Year’s Day 1791 and proceeded to London immediately, where a week later he wrote to his sponsor Prince Anton Esterházy about the new libretto he was waiting to receive on which he would base his new opera L’anima del filosofo. It was often referred to by its alternative title, Orfeo ed Euridice, under which name it was published in extracts by Breitkopf & Härtel in 1806.

The tale of the enduring love that made Orpheus risk his own life to retrieve his wife Eurydice from the underworld does not have a happy ever after story. And would their love endure through time? Well, we would have to say certainly the telling of it has, based on the many plays and poems that record it. And certainly following this performance of Haydn’s little known opera by the Pinchgut Opera surely that will change. The company and its performers have set a very high bar for others to follow both artistically and musically. Good on them. They have taken the risks and they should reap the rewards. This is a production they could present in any capital city of the world to resounding acclaim.

Under the inspired direction of Mark Gaal this Christmas at Sydney the Pinchgut Opera presented a rare, unique and special experience through the music of maestro Haydn. The special effects and individual and collective performances will certainly live long in the memory of the people who experienced this amazing event held over six days. The protagonists all made us believe this dark story about the man, who even the ancient Gods are said to have admired, Orpheus. Gall cleverly used three young Nida actors as non singing Fates, who were both controllers and contributors to the unfolding of the story and its events. 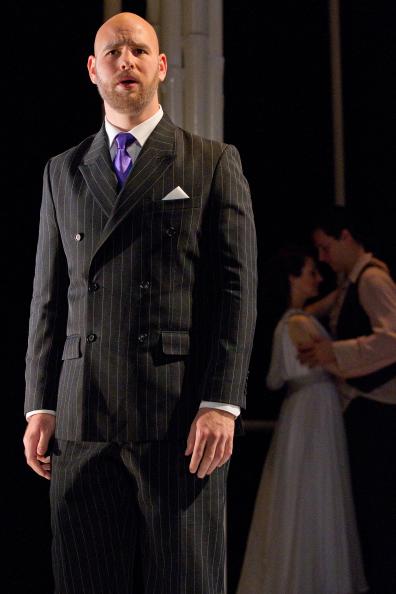 Before we discuss the singing performances we must first commend the creative set designers, Brad Clark and Alexandra Sommer and the innovative lighting designer, Bernie Tan-Hayes. The cost effective contemporary set produced from PVC piping was not only clever but also visually sumptuous, at least from the audience’s perspective, and it certainly aided our experience of the opera as a whole. It was very well done.

The music by Haydn was filled with spontaneous melodic and harmonic invention, highlighted by the singing of the supporting chorus, the very clever Cantillation. After some years of working with the creative team at the Pinchgut they are noticeably more daring with their movements, which included the girls stripping down to petticoats in the last sequence. And, they all sing with such wonderful precision and great warmth.

Having them off stage for the first act and then on stage for the final dramatic act in the Underworld was clever staging. It allowed the audience quality time to connect emotionally with the central characters in the first few acts as they glided around the cleverly Palladio* like ramped up stage set. The call to revenge with trumpet fanfare that closed Act Two was carried out in a stirring fashion.

The Orchestra of the Antipodes, with its mixture of period, reproduction period and modern instruments, was perfectly suited to the stylistic changes of Haydn’s truly delightful music. Conductor Antony Walker directed his players with great inspiration as they leaped boldly and nimbly across the works many different mood swings and fluctuated effortlessly between its baroque and romantic genre’s.

There are many many memorable moments when the singers voices are highlighted by the playing of the piano, the cello and harp recreating the lovely notes of a lyre. They are indeed pure magic. The music is always a backdrop for the voices to shine on, never dominating, just achieving a beautiful balance while moving both gracefully and flawlessly between each change of tempo.

Her sensible and sensitive singing of the role of Eurydice in the first act was echoed brilliantly by the splendour of the Angel Place acoustics. In the second act it took on a much broader texture and achieved a far more powerful dimension as she became the spirit beckoning to us all by the use of a beautifully expressive tone. It bounced back boldly of the roof like fireworks exploding, echoing the sounds of the thunder and lightning that filled the hall. Both parts were technically demanding, but Elena sang consistently and beautifully from the first bar to the last. She has a great subtle and natural gift for opera and her duets with Andrew Goodwin were both sensual and stirring. 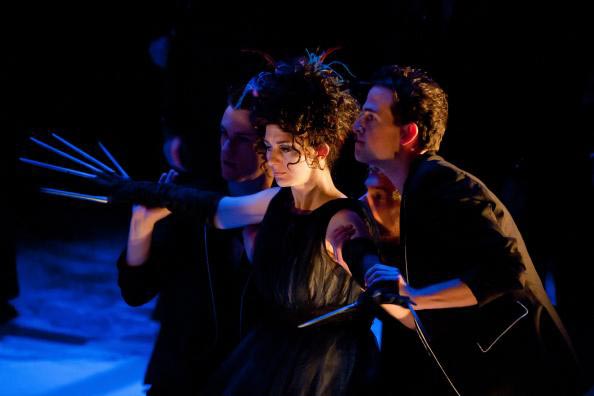 Elena as the Spirit

Tenor Andrew Goodwin’s warm rich tones melded so beautifully with Elena’s voice that at times I could feel my heart literally leaping along with the music as he moved easily from romantic moments into the descent of sheer madness as the hero, who is caught up in the maelstrom of events surrounding his efforts to retrieve the love of his life.

Baritone Derek Welton’s voice was the perfect foil for them both.

He combined crisp changes of coolness with sharp anger and vengefulness and both gentleness and warmth. Sounds crazy, but true. And, it made his moments on stage truly memorable.

The Pinchgut Opera began in 2001 as an idea to give audiences a different experience of opera and to make opera accessible to a whole new audience. Judging by the audience at the 5pm on Sunday it has succeeded handsomely.

They wanted to showcase Australian talent by performing fascinating lesser-known masterpieces in an intimate venue with an excellent acoustic, which the Angel Place Recital Hall fulfills and more. The season comes to a close tonight and would it be that I could take a plane back this afternoon and enjoy it just one more time.

The Pinchgut Opera’s 2010 production of Orpheus+Eurydice was inventive and displayed great artistry.  It was poetic but never bland, dramatic yet beautiful and with a deep dimension of expression that was quite literally out of this world.

* Andrea Palladio was a sixteenth century Venetian architect who designed a ramped stage to make it appear wider than it actually is.