Sarah Gadon as the Princess Elizabeth in A Royal Night Out directed by Julian Jarrold, Written by Trevor de Silva and Kevin Hood

V.E. Day was celebrated in London on the 8th May 1945, with peace at last coming into effect at midnight May 7th, marking the formal acceptance by the allies of Nazi Germany’s surrender of its armed forces, ending World War II in Europe.

The dramedy A Royal Night Out now showing at cinemas in Australia, has an excellent script written by Trevor de Silva and Kevin Hood, telling the heart-warming story of two Princesses.

They want to leave the confines of their gilded cage to join with other people and be as one to celebrate a magical once only journey for them in the reality of life.

It was as we understand, that naughty spare to the heir Margaret’s doing. After failing to convince their conservative parents herself, she sows the convincing seeds of her ‘brilliant’ idea into her elder sister Elizabeth or Lillibet’s mind.

Margaret charges her eldest sister with ‘demanding’ her right to get to know what would soon be ‘her people’ on one of the happiest days of their recent lives.

It would be easy in this day and age to become entirely jaded enough to not enjoy this delightful narrative and movie. It has been imagined with great wit and style by its talented duo of writers.

You would have to have a hard heart not to smile or enjoy their well-written and researched script. 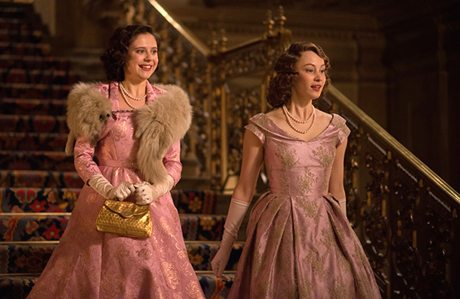 Pretty in Pink, the girls dressed for the Girl’s Night Out, photo Nick Wall

The story is certainly true up to a point, especially as the Princess Elizabeth stands at the gates of Buckingham Palace as the crowd around her chant ‘We Want the King and Queen ‘, and watches their reaction when her parents appear on the now famous balcony, acknowledging the crowd’s well wishes. It really happened.

The brilliance of the research the writers have clearly carried out before putting pen to paper to help them imagine a fictional story about such an event, shows. There are plenty of truths included that are backed up in documentation.

It is clear from records that the two princesses did actually escape the palace a number of times, not just one. Elizabeth, Margaret and Jack, A Royal Night Out

On and after V.E. Day, Princess Elizabeth (Lillibet or Lizzie) enjoyed herself on a number of occasions as freedom was celebrated, recording her impressions of  “… one of the most memorable nights of my life”.

Bel Powley as Princess Margaret is a scene-stealer when she’s on screen, lighting it up with sparkling life. Like a bull at a gate she just charges ahead unaware of the consequences of her actions, leaving her sister struggling along with many others in her wake.

Sarah Gadon, a young actress from Canada perfectly captures the essence of a girl who became a ‘people’s princess’ Elizabeth, showcasing her known fairness, quiet industry, strong will and very definite ability to charm. As a young woman Princess Elizabeth  is very perceptive and so it is no surprise she turns a rabid socialist, Jack the airman played with intensity by Irish actor Jack Reynor, into a real fan. Jack not only becomes her rescuer and hero for her great night out, but also with her help overcomes his own bigotry. By taking the girl he knows as Lizzie’s advice, he dispenses with the trouble he might have been in because of being absent without leave from his unit.

In realty No 230873 Second Subaltern Elizabeth Alexandra Mary Windsor persuaded her father only a few months before VE day to let her learn to drive, strip an engine and change a tyre, none of which she has to do on her ‘big night out’.

Their two chaperones chosen by their mother and charged with looking after them and to take them to a party arranged for them at the Ritz are lured away from the door by a gaggle of girls looking for a good time.

It turns out to be perfect timing for the girls to get away. Elizabeth has to use all her skills to cleverly leave a stitched up party at the Ritz her mother has hastily organised to keep her and hopefully her sister in check. Elizabeth is alarmed when she discovers Margaret has gone off on an adventure and goes in pursuit..

Lizzie tries her best to catch up with Margaret, seeing her jump on board a London Bus with some very suspect characters. Shedding her and Margaret’s chaperones, Lizzie catches another bus in pursuit of her sister without having any money.

Despite being able to see her sister, suddenly the bus she is on diverts on another route, she watches her silly young sister disappearing and panics.

Lizzie as she asks Jack who is on the bus next to her to call her, is persuaded to come to her rescue, pay her fare and help her to find her sister.

He’s clearly disarmed by her refreshing honesty and ability to charm and decides to go along for the ride.

Seeing as a bit of silliness at first, he can see however she’s going to really be hard work and needy too. Besides, she is one of the toffee types with a posh voice he doesn’t really like so he tries to ditch her in Trafalgar Square and find a few dames to go off with.

Persistently however Lizzie negotiates the crowds of people letting their hair down to catch him up and persuades him yet again to continue to help her.

They develop a truthful love-hate relationship just like good friends do and he helps as she learns how to let people touch her and knock back a beer easily in the local pub.

In the pub she hears her father’s speech to the nation on the wireless, encountering first hand the reverence, respect and love the people, except for Jack, have for their royal family.

He’s openly hostile and she knows now she needs to convert him, which will be quite a challenge.

Totally in the dark and persuaded into helping Lizzie yet again, they check out the posh Curzon Club where Margaret had said she would like to go. They then find themselves following her to where she has now gone – what Margaret describes so colourfully to her parents as a Soho ‘knocking shop’.

She has been given a mickey by her ‘date’ and succumbing to hallucinations takes a wrong turn and unexpectedly turns up in a back room where she pals up with the equally sleazy owner of the Soho dive, who as it turns out is a real royalist.

Margaret in her stupor reveals her true identity and excitedly… he gathers up a group of his girls of the night and they all set out to go dancing and drinking at the Chelsea Barracks in two cars. Margaret knows the password and thinks it will be fun

Just missing Margaret at Soho Lizzie and Jack escape the pursuit of an angry bouncer as she has convinced him yet again to take her to Chelsea.

She’s hoping against hope Margaret will be there because they had talked about how much fun it would be to go dancing with Officers at the Barracks.

Catching a barge along the Thames to Chelsea, Jack confides to Lizzie that he is AWOL. Furious at first, she then decides to help him and they plan a solution together. Finally, catching up with each other royal princess on A Royal Night Out

At the Barracks they finally meet up with Margaret and all dance up a storm on the dance floor, letting their hair down at least until the ‘security’ MP’s at the party try to arrest Jack. After all he’s not an officer.

Drawing on all her training, the young Princess Elizabeth finally steps forward and reveals her identity to the ‘shocked’ crowd with her now rescuing Jack who is left speechless, yet again. I am Princess Elizabeth….

Jack transports Margaret in a wheelbarrow, taking Elizabeth to meet his salt of the earth mother at home down by the docks. 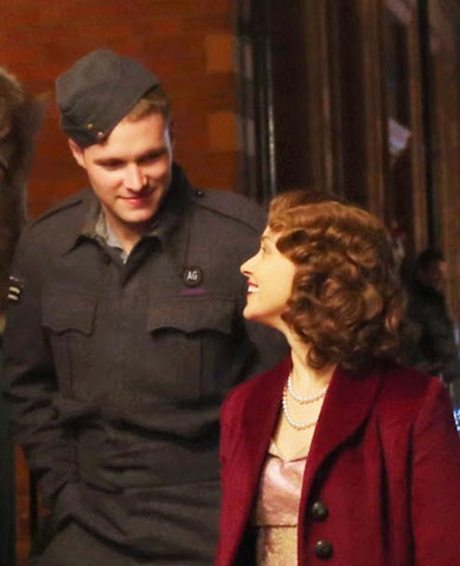 Jack Reynor as Jack, Sarah Gadon as Princess Elizabeth, A Royal Night Out

Jack’s mother is a royal devotee and Elizabeth seeks her help to sober her sister up before sending her off home to her parents at the palace with their protectors who have miraculously re-appeared at the Barracks.

Jack Gordon and Jack Laskey appropriately ham it up as the two chaperones, having the time of their lives while being totally irresponsible and irresistible.

Lizzie stays behind to spend some precious last moments with Jack, both of them understanding that their night on the town and friendship cannot last beyond the dawning of a new day, era and future.

All of the actors play their parts so well we cannot help but like them.

Bel Powley as Princess Margaret is a delightful case study.

This is a Princess who is always putting her foot into it and behaving not as her parent believe she should.

In reality I remember the real Princess Margaret well when I was growing up, constantly creating headlines and embarrassing the royal family.

In A Royal Night Out Rupert Everett is kept busy proving that his blood may very well be blue. He plays King George as if he was born to do so and as Everett really does descend from Royalty, King Charles II in fact, it’s hardly surprising this is a role he performs very well indeed.

Jack as played by Dublin based 23-year-old Jack Reynor, is the perfect Irish rebel. He has been on many sorties and missions as an airman with the English and survived a miracle in itself.

He has the right swagger and attitude towards a woman he could not have ever have imagined meeting, let alone spending an innocent night out with. 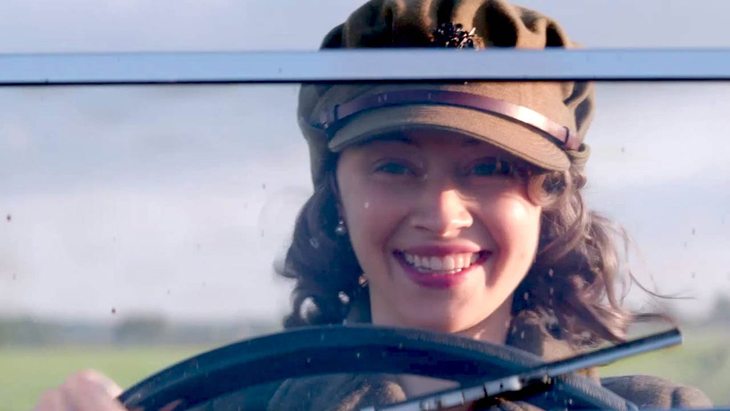 His new best friend Lizzie after an unexpected and surreal brekkie for him taken at the palace with the King and Queen, drives him back to his airfield at break neck speed just in time to appear on parade.

Jack’s Mum is Ruth Sheen, who turns up often in English character parts. Her wry sense of humour and down to earth practical character is one we know well.

Sarah Gadon as Elizabeth is all class, nailing the role of the young Princess perfectly. Her early training as a potential ballerina means that she carries herself just like a real princess would. It’s a big plus. 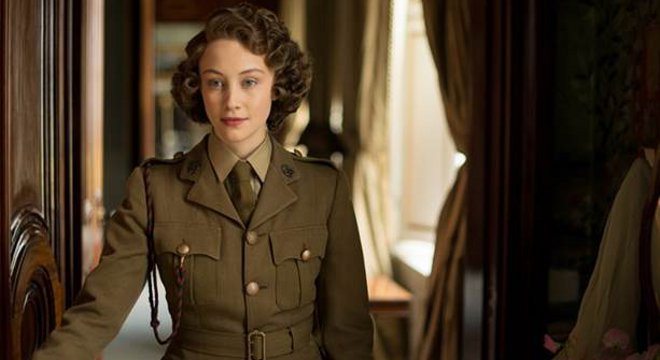 She’s also convincing because she really inhabits the role, putting in on like a second skin and I am sure she has made many fans and impressed future directors.

Feeling tired and decidedly jaded when I went to see A Royal Night Out and not expecting much at all, I came away uplifted, with the spring restored to my step and a broad smile on my face.

The Maticevski woman has grown up says Jo Bayley in Fashion Elixir, Toni Maticevski is is evolving his aesthetic in such a sophisticated way, so exciting to see