Emotionally telling and visually spectacular, the Warner Bros Pictures movie A Star is Born already has gold Oscar style halo’s gathering around it, as it wows crowds all over the world. The directorial debut of Bradley Cooper in remaking this classic tale, meant him also taking on the lead role of a seasoned successful musician lead guitarist and singer Jackson Maine. 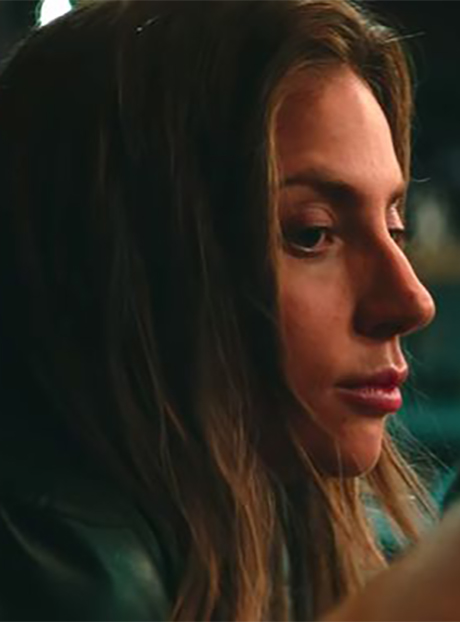 Lady Gaga as Ally in A Star is Born, courtesy Warner Bros Pictures

As both he is a tour de force, especially when singing. He has a wonderful voice.

Cooper is portraying a man who lives in a world of pain, at least until the night he has his driver stop at a bar he’s never been to before where he unexpectedly encounters Ally, played with so much conviction and clarity by Lady Gaga.

When he discovers, Ally is not only a sensational singer, but also a wonderful songwriter about to give up on hoping for a career in music, he has to pull out all stops quickly in order to dissuade her from following that path. He believes she is that good.

Do Not Read Any More if You Don’t Want Spoilers 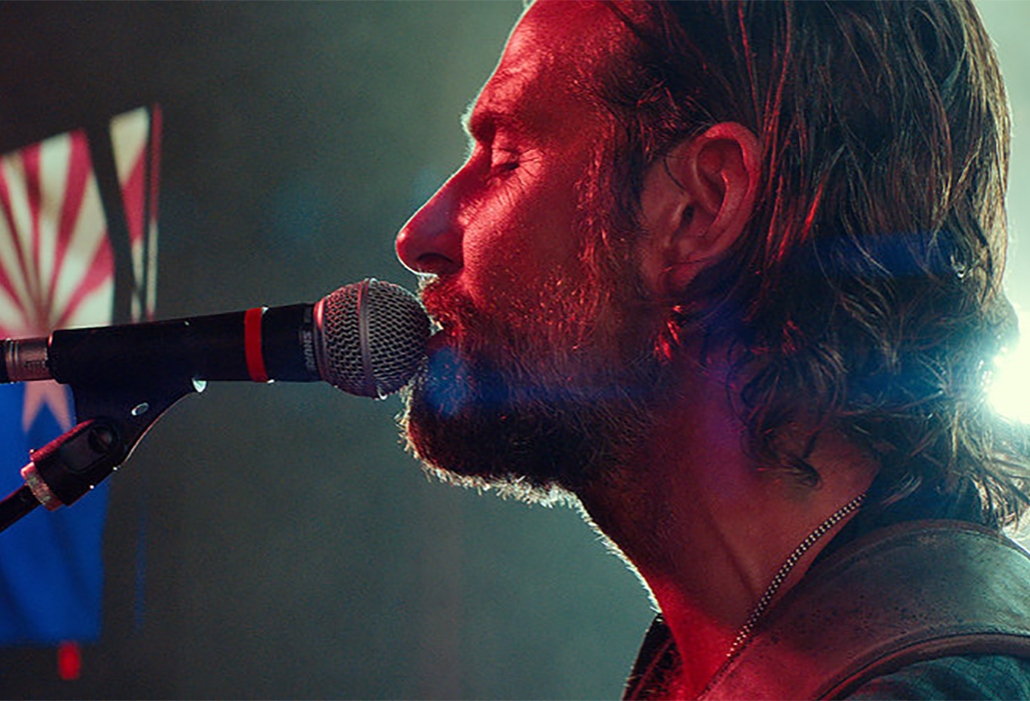 After finishing her waiter’s stint, Ally awesomely performs the classic French favourite song La Vie En Rose, in a drag night club where a bevvy of gorgeous ‘girls’ give her support. Jackson enjoys surprise after surprise during this extraordinary encounter and sets about introducing her talent to a much larger world.

The challenge for Jackson is helping Ally to quickly build her self-esteem, which is low, virtually overnight. He knows that then she will be able to take that frightening step out onto the wider world stage. So, he invites her perform at his next gig and while this is the break she has dreamed off… she asks herself is it real? 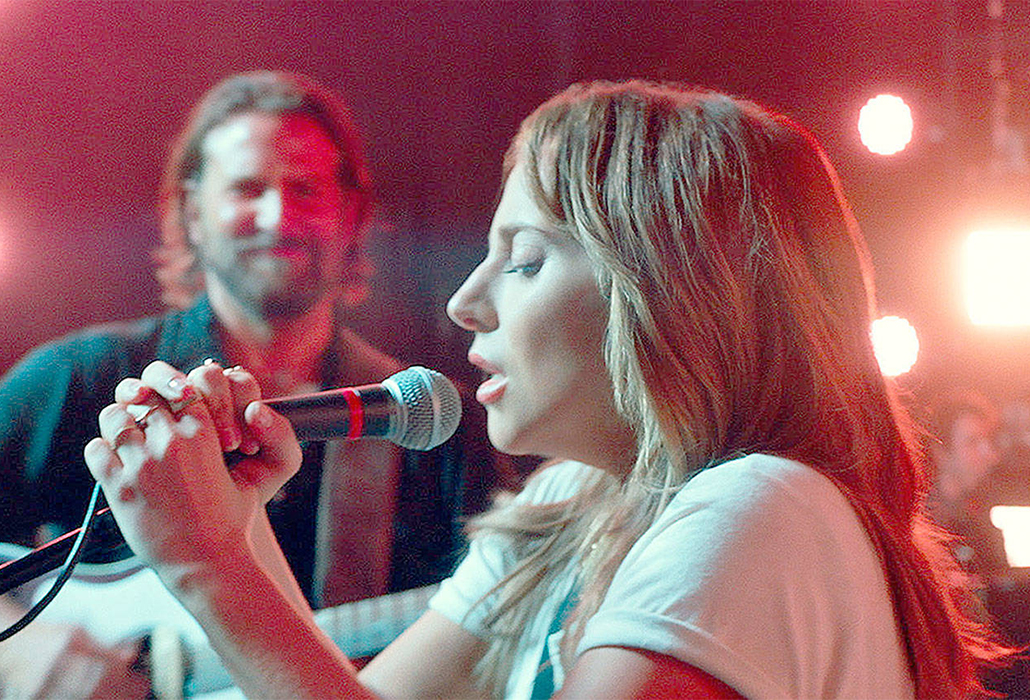 Lady Gaga as Ally in, A Star is Born, courtesy Warner Bros Pictures

Sending a private jet as a final means of persuasion to pick her and friend and supporter Ramon (Anthony Ramos) from the club up, when in a spur of the moment decision she decides to go, probably helps her come to terms with what is happening. The journey certainly gives her time to think about what she wants in life and what has happened to her ambition.

Seeing she has arrived in the wings, Jackson walks across and simply and personally coaxes her gently onto the stage, where for his enormous group of fans, these two immediately become the dynamic duo made in heaven. 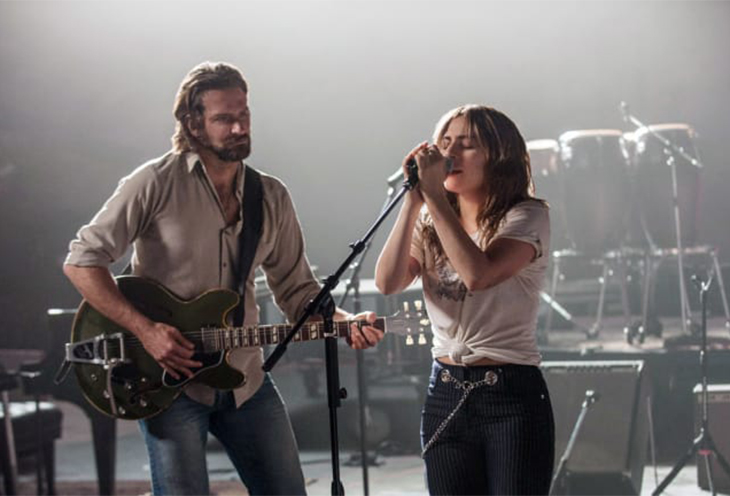 Their voices blend beautifully together like a rare and fine wine and Jackson, surprisingly, finds himself falling in love.

Jack and Ally’s love affair as it grows in concert with their making love and marvellous music together, is a delight to behold. They deal honestly and openly with each other and he is equally amazed when she professes her love for him as well.

Love is not a feeling he ever thought he would experience, because Jackson had completely given up on it ever happening to him. Being soul mates he finds however is only part of the battle, and will not always help him win the war of real life; especially with his own demons and, Jackson has many. 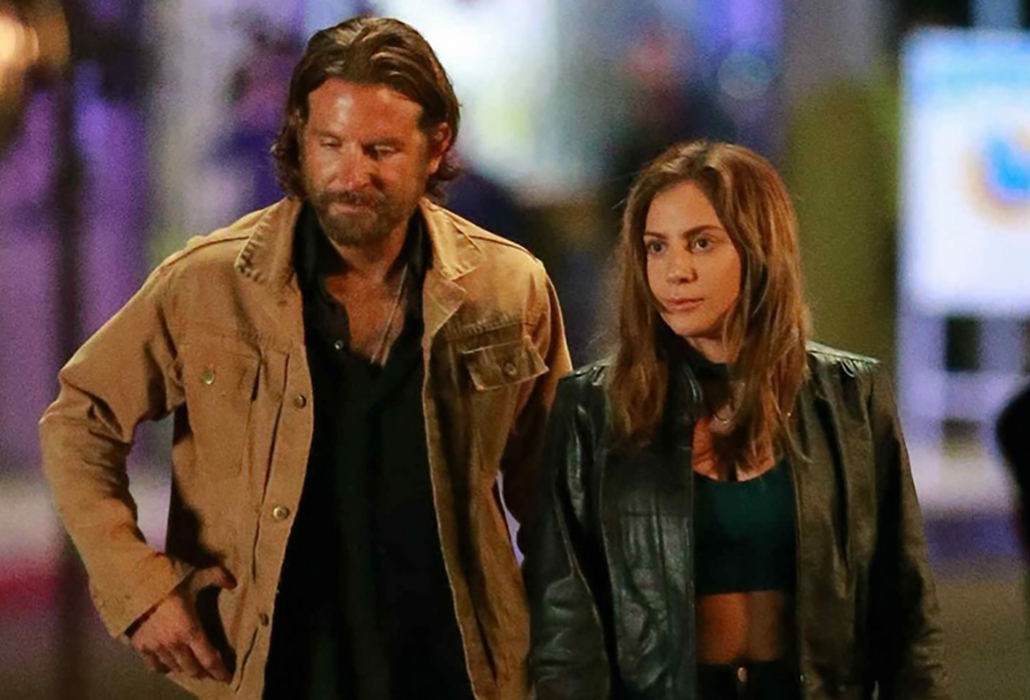 The story has a focus on mental health a malady, society on a whole world wide is wrestling with at the moment. It is a condition that often seems to go hand in hand in the way of those blessed with rare talent, including musicians.

They generally have high levels of genius, which the majority of people surrounding them are often unable to share because they are in awe of of their talent, which doesn’t help them in sharing their personal pain and hurt.  That only happens with someone you trust. 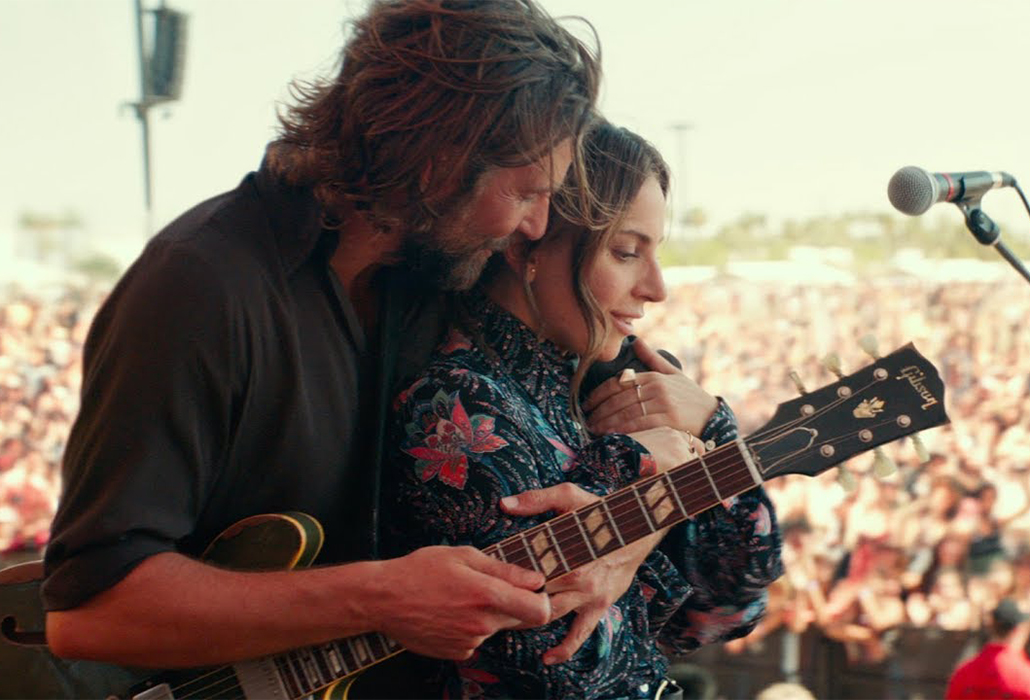 As a Director, Cooper uses close ups in an intimate way, and as a device to ensure we see every nuance of emotion these two people feel at every stage of their developing relationship. And powerful it is too, as he brings contemporary themes to bear on an old revamped storyline.

My first acquaintance with the original story for this movie which has been reincarnated for the fourth time here, came along with my seeing the version made in 1954 starring Judy Garland.

Apart from being an awesome talent, much like our generation’s Lady Gaga, Judy Garland in reality, was a deeply troubled, sometimes distraught individual, who generally made life unbearable for those around her off screen. Those who knew her well though, always forgave the hurt and anger she caused the moment she stepped onto a stage to sing, because she was so magical. 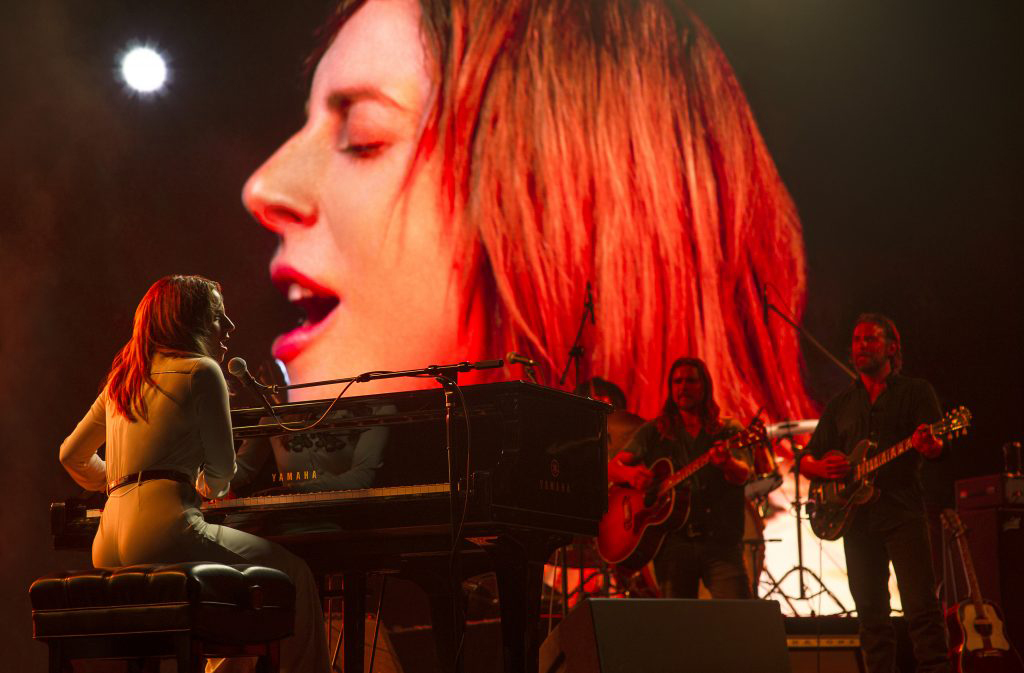 During those moments. she became incomparable, which is the parallel to be drawn with Lady Gaga’s flawless performance in this rendition of A Star is Born.

Her rendition of the song Shallow is masterful.

She illuminates the stage and captures our hearts with her fabulous and quite extraordinary voice, one she revealed in an interview she especially and very cleverly created for this movie, one that rivals her own in the real world.

No matter how hard she tries though, Ally finds her life with her new husband, often difficult. In helping Ally as his protégée to attain her potential and reach her goals, Jackson Maine extraordinarily diminishes and finally ruins his own.

She becomes his excuse to not clean up his own act. 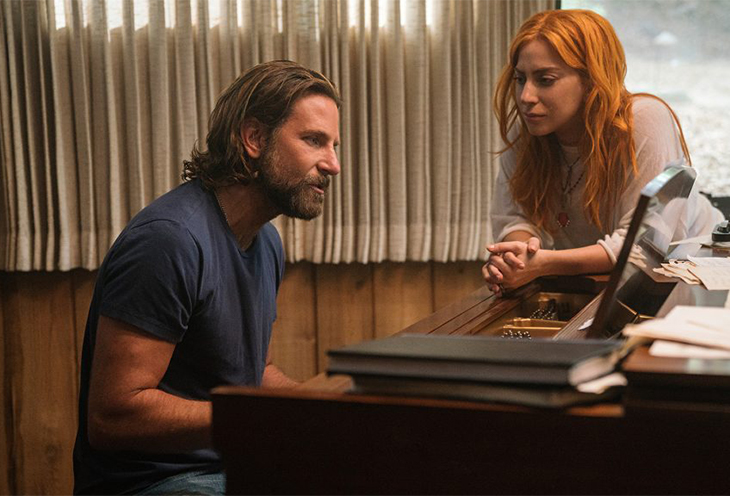 He cannot handle the fact she must walk away if she is to become a star in her own right, one very different from what he had hoped, complete with dancing girls behind her just like every other pop cult figure.

He has to learn to accept that finally, after finding his own dream golden girl, she is not always going to be there backing him up on stage in a beautiful experience, which has until this point, given him a whole new lease on life.

Understandably, he hasn’t wanted to go beyond that point for we realise that long vision and personal strength is not something integral to his nature.

As she slowly and with conviction pulls away, Jack’s problems now really surface. Having disguised and managed his alcoholism and drug taking for so long, it takes on a whole new dimension. 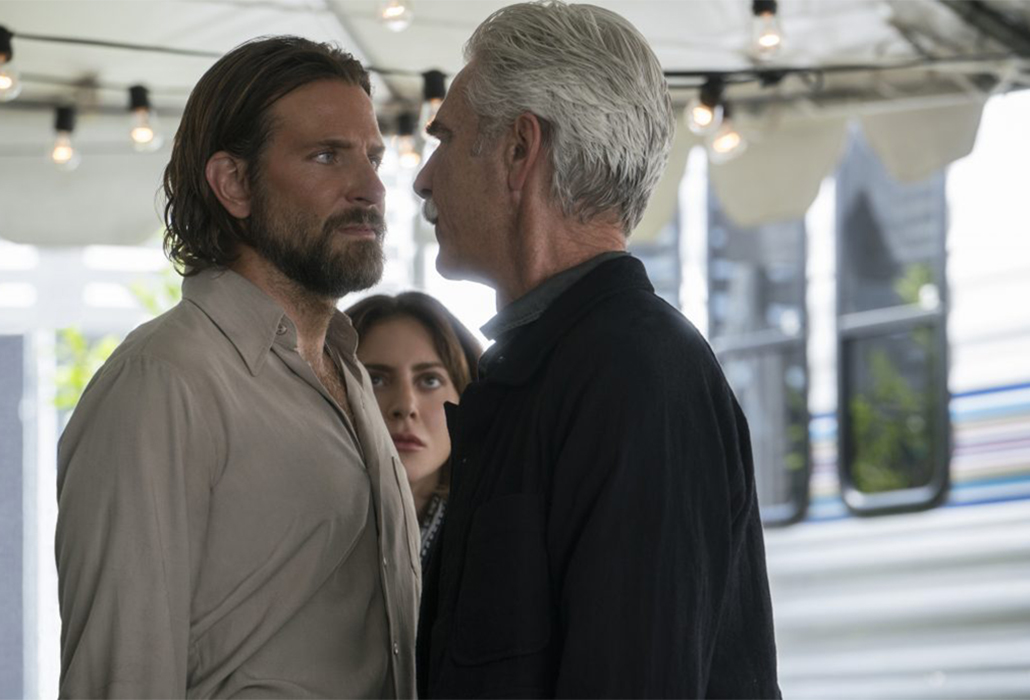 Bradley Cooper as Jackson Maine, Sam Elliot as Bobby with Lady Gaga as Ally in, A Star is Born, courtesy Warner Bros Pictures

Another great problem too is that he’s also partially deaf, and slowly getting worse. This is causing serious problems with finding his tone and it’s been caused by dealing with all that sound feed back, with the music turned up to excruciating levels, since he was a teenager.

Up until now the usual rows with his brother Bobby (Sam Elliott), who not only brought him up when his father died, but always had his back on tour. Their angst escalates until Jackson alienates Bobby in one spectacular scene, causing him to walk away as well. Then, after embarrassing Ally terribly on stage when she wins the Grammy Award for the Best New Talent.

He enters a treatment centre for the first time and we are all relieved he is finally getting himself back on track by being sober, when Ally’s new sleazy manager Rez Gavron (Rafi Gavron), who has won her trust, turns up to unknowingly to destroy all the medical team’s great work, as he convincingly puts his rival down. 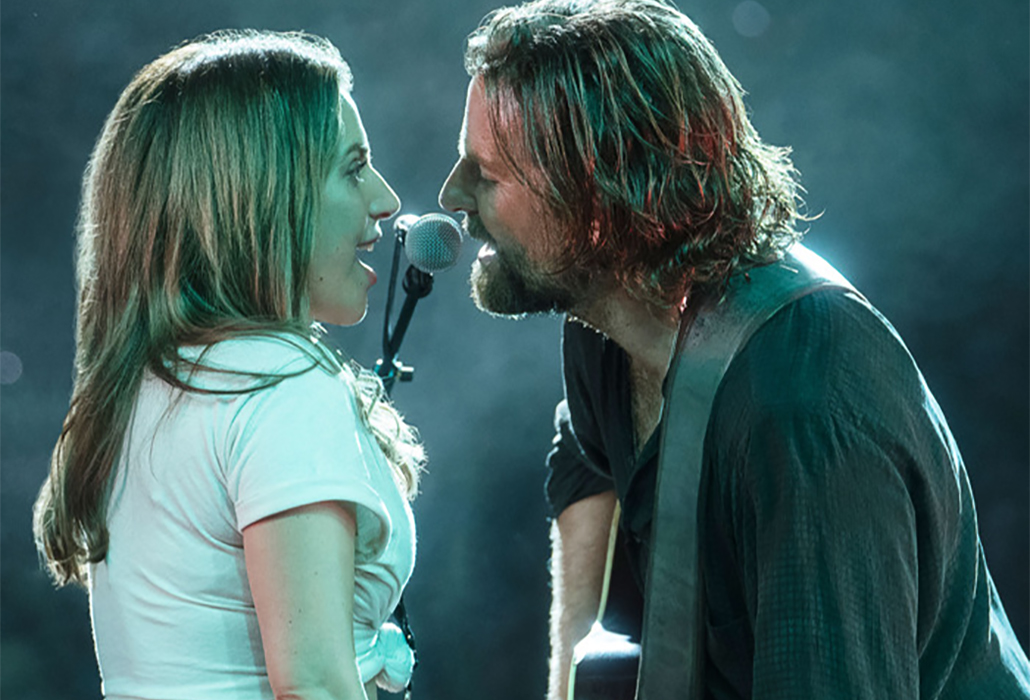 He’s not seeking to understand why Jackson does what he does, but fully intent on crushing the one man he can see will take away his new ‘meal’ ticket; husband or not.

Jack is left feeling that being in love sometimes means walking away from the very person who has helped you finally to define your life. For him it is devastating and his resultant actions are tragic for everyone.

Remembering with love, that period when he had been sober, Jackson had wisely advised Ally if she is going to truly succeed out there, she always has to sing from deep within her soul, or no one will believe her. 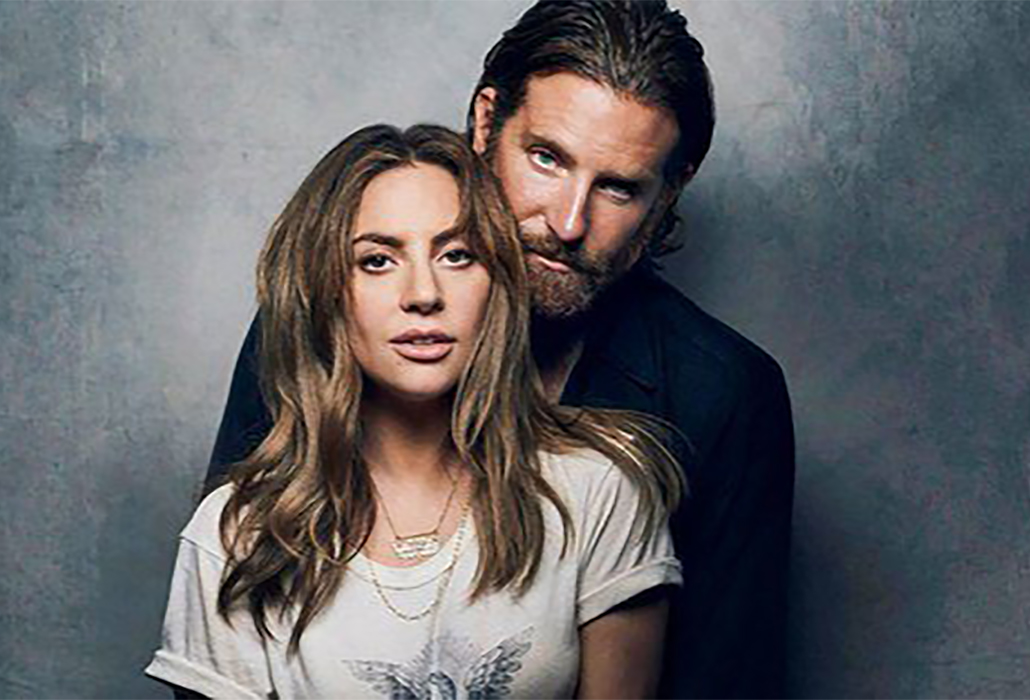 It becomes her comfort as she looks back on their life together through song I’ll Never Love Again, and at the end, she finally takes his advice and she brings the house down, It is in her new beginning, that this all new star is born.

This film has it all; success, failure, tragedy, love, heartache, a bevvy of broken dreams for both stars and, exceptional performances. The songs on the sensational soundtrack alone should win awards on their own merits.

However, it is the two main actors, who have the help of a carefully chosen and spectacular supporting cast, who win our favour completely. Bradley Cooper’s rendition of Maybe It’s Time, is exceptional, as he surprises all with his stunning singing voice

Be warned, A Star is Born will be sure to tug on your heart strings, before boring right down into your very soul, as it did so brilliantly with mine.

Eminent Australian The Honourable Dame Marie Bishir as Patron will inspire the Australian Haydn Ensemble, sharing a passion for the music of Franz Joseph Haydn