By and by, I come – to cease thy strife, and leave me to my grief… a Thousand Times Goodnight is not a message delivered as it was in days of yore by two Shakespearean lovers… so thrive my soul – it is a chilling deeply intense dramatic portrait of the power of pictures to tell a story of our times now showing at Palace Cinemas.

For Rebecca the burning passion that drives her on ensures that her pursuit of her pictures is ongoing and oscillates between conflicts both personal and professional.

The movie offers a broad based statement about the absolute horrors and atrocities inflicted daily in war zones around the world, providing a snapshot of the power of pictures taken by a woman photographic journalist. Setting her own personal problems aside Rebecca ventures to highlight the problems of the third world with her award winning brilliant photographs. The pictures are not pretty. She wants people to react.

Rebecca is played with commitment by French actress Juliette Binoche, who works hard to unravel her character’s complex soul without much help from the script, proving ultimately the power of imagery can engage and empower. The pain and urgency of this story is written on her face.

Based on the true life experiences of a war photographer during the 1980’s in Kabul A Thousand Times Goodnight contains many chilling images that should send shock waves through society. Anger when she was young we discover is what drove Rebecca on in the first instance to flush out the stories and images.

As she has progressed however, she has had to grow and learn to work with her anger if she is to make a difference and tell the story well.

Anger is also deep in the heart of her well mannered teenage daughter Stephanie.

Differing greatly in delivery, when Stephanie’s anger comes to rocketing to the surface it is to tell her mother forcefully that ‘it would be easier if you were dead – then we could all be sad together’.

Rebecca we discover is bound by her own lack of understanding about the passion she has within her.

It compels her to pursue stories about conflict at the risk of her own life and that of others, and in spite of having a family back home waiting.

They are living in constant fear that their wife in the case of her husband, and mother to her children, won’t return. …catapulting the horrors of the world into our own private spaces as Rebecca, pleads with her editor back in America to use her images.

She feels helpless when she tells her it may not happen.

As we discover the powers that be in the Pentagon have threatened the editor with action if the media ‘glamourizes’ the dreadful atrocities Rebecca has recorded in this brutal war against humanity. And that is a real danger? Or is it a cop out?

Rebecca answers with a clarity born of innocence of how hard her images impact… but “I Only Take the Images I See’.

As we progress we do gain empathy for Rebecca and her plight, as she moves between the two different aspects of her life, failing to keep her headspace clear.

It is no wonder she’s recovering in hospital from severe physical injuries received on assignment.

Working in Kabul she’s been given permission by a suicide group to follow a young woman through a ritual where she is stripped and washed all over before being packed with explosives, reclothed and swathed in a black cloak that only reveals her eyes.

Rebecca is given permission to ride in the car going with her to record as much as possible her act of martyring herself for an idea and a cause. Such is the power of belief. Hard to believe any deity would demand such a thing from those it cares about. She becomes both a victim while probably being the cause of the blowing up of innocent men, women and children in a crowded street.

She wants to momentarily step outside the van in an endeavour to take the best shots possible, however her actions alert the soldiers who were until that moment waving the van past a checkpoint to enter the crowded part of the city.

Rebecca’s belief she must capture these images to warn the world is opposite to the suicide bomber’s belief she is moving on to paradise.

The imagery only serves to reveal a lack of common ground we have to build upon if we are ever to establish any sort of trust or relationship with people dealing with so much anger that they will also turn on their own people.

This film highlights the unreal world we live in, where peace and freedom in the west is something we enjoy, especially evident for those living along the scenic coast of Ireland where the scenes of Rebecca’s home reveal them living a normal family life.

It is far removed from world hotspots where a tyranny of distance enables the majority of us to suspend reality. Rebecca’s husband played by Nikolaj Coster-Waldau, is clearly frustrated by the risks his wife takes, while also being attracted to her passionate caring about the conflicts she is covering.

Her passion is what drew him to her in the first place but now he’s suffering from his own internal conflicts. Sadly I found his character development wanting.

Rebecca has two daughters, one still a child wanting a kitten and a teenage daughter Stephanie, who is at the point of wanting to know what really makes her mother tick. It is a lovely performance from Lauryn Canny and we gain a real sense of what it is to lose our innocence.

This happens when Rebecca, urged on by her marine biologist husband who while wanting her to stay home and reconnect with them all, also sends them both to Kenya.

Steph is seeking to understand the world around her a great deal better as part of a school project. Her wide eyed horror and rude awakening to the ways of the world await.

Her father urges them to go as they have been led to believe the visit will be safe by a friend who works for a world aid organization.

When they arrive and begin photographing village life from just across the nearby border rebels with guns arrive and start killing randomly.

In the heat of the moment Rebecca sends her daughter off in the van, caught up in the moment she feels impelled to stay and photograph the shooting of innocent men and women before the much bigger military presence swoops in to save the day. 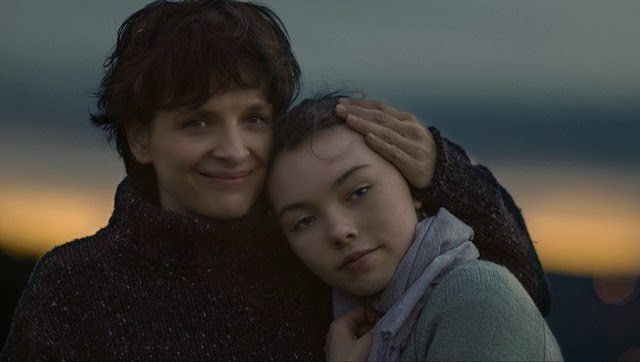 The conflict her actions cause back home when they arrive safely is absolute, and she is puzzled.

However her husband now with conviction in his heart turns her out permanently, despite her eldest daughter coming to terms with who and what her mothers is as she finally tells her story to schoolmates with a photographic presentation of the horror saying

“They need her more than I do’.

It would be hard for anyone to say they ‘enjoyed’ this movie. For each person who watches it will take away a very different message and different impression of it’s telling. For me Binoche’s performance was very powerful.

For many however the difficulties with the scripting and direction will be puzzling, as they move between the opposite ends of the spectrum, especially with such a hard hitting point emphasized during the first minutes of the movie.

This is very confronting and suspenseful compared with the quieter silent deeply sad ending as the true horror of pictures she is taking suddenly pierces Rebecca’s self inflicted armour plating.

For me however, it was the movie’s strength. 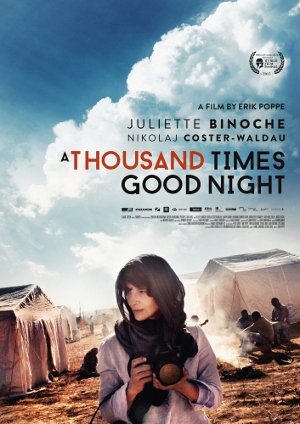