Author Bill Bryson was very happy when he discovered renowned actor Robert Redford had purchased the rights to his latest best-selling book and decided to play him in a film version he was to make about his funny, fact-filled great adventure hiking part of the celebrated Appalachian Trail in America.

Directed by award winning Ken Kwapis, the film A Walk in the Woods premiered at the Sundance Film Festival in America earlier this year and will be generally released in Australia and in America in September, 2015.

While some 2-3 million people from many countries around the world walk the Appalachian Trail every year it seems only a small percentage complete the journey of 2,180 miles.

Published as a book in 1998 “A Walk in the Woods: Rediscovering America on The Appalachian Trail” written by Bill Bryson, the man considered ‘a natural wonder’, it is about his traversing a large part of the ‘longest marked footpaths in the world’ with his friend Stephen Katz. The Baby Boomers and X generation, who adore Bryson’s books and know his reputation for entertaining, were understandably all out in full force, for the sold out event preview of the movie in Melbourne.

The event took place on Tuesday night 11th August 2015 at The Astor Theatre, a 30’s deco style single-screen revival movie theatre saved by the locals from being demolished in the inner city suburb of St Kilda.

It is so rare to laugh out loud at the movies these days and my companion and I were delighted with the film, featuring actors Robert Redford and Nick Nolte  a great pairing. They had us laughing ourselves silly at the wondrous truth-telling script, delivered by two veteran actors with crusty humour in a screenplay by producer Bill Holderman.

The delightful Q & A session on stage live following the film with Bill Bryson being interviewed by ABC presenter Jon Faine was the icing on the cake. He did prove to be as natural as the trail he traversed, which runs through some thirteen states, following a natural corridor of wilderness.

It is some ten years or so now since Bill Bryson’s book was hugely successful, telling his own tale of taking a monumental walk with his shambolic friend Katz. In Bryson’s words these were ‘vast tangled woods, which have been frightening sensible people for three hundred years’. Observing ‘It is a remote mountain wilderness filled with bears, moose, bobcats, rattlesnakes, poisonous plants, disease-bearing tics, the occasional chuckling murderer and – perhaps most alarming of all – people whose favourite pastime is discussing the relative merits of the external-frame backpack’ Debonair suave, urbane, handsome despite his advanced years, Robert Redford Bill Bryson told us is the man everyman would really like to be; sophisticated and successful while all the while witty, fun and fabulous.

He’s not wrong… Redford is also renowned for making ‘intelligent’ movies he said, ‘…so from this perspective it was very flattering that it was he who bought the rights to tell my tale’ Bryson related.

Bryson also related how it was originally going to be a reunion film for Redford and Paul Newman who had been so great together in Butch Cassidy and the Sundance Kid, which would have been a very different affair. Sadly Paul Newman passed away in 2008.

While Bryson said the film’s story as related by Redford and Nolte weaves in and out of his own, it’s delightfully different, although adhering to his aim of always wanting to walk the trail because it’s there, not because he has something to prove or for any other reason.

It was a meditative adventure waiting close by (it ran past the back of his home), it’s there whether or not we choose to embrace it.

Most hikers come from all over the world to attempt this challenging feat as well as from within America. Starting by walking north from Georgia in the Spring and finishing in Maine in the Fall, taking an average of 6 months to complete what is an often dangerous and extremely arduous journey, 90 % don’t make the whole journey.

Bryson fell into this category only making about 40% of the trail’s best bits. Born in America he had lived abroad for over 20 years in England, at the time returning to live in a tiny town in the north of America and looking at it again through more mature eyes he became aware of its enormous scale.

Seeing the sign and discovering the trail ran through his town, sparked his ongoing curiosity. It was hard work but as he said, having cleared your mind and concentrating on only what’s happening suddenly a state of great happiness ascends upon you. This ensures that you can become in many ways reborn.  Losing caffeine out of the diet helps too, and all that exercise stimulates and inspires you in new ways. In the film glorious aerial location shots give us an overall view from time to time of how splendid the countryside they are passing through really is, with much of America not living in cities, really living with natural wilderness virtually on their back doorstep.

He said this for him was a revelation, because when he was walking the trail except for a few spectacular vantage points where you can look out over the land, most of the time you are seeing only what is right before your eyes.

Bryson became globally known really with his brilliant book A History of Everything in 2003, forcing his publishers to let him stray from the travelling category they thought they had condemned him to for life.

He talked about how when you do write a successful book first up, which he did in his own country with The Palace Under the Alps in 1985, then everyone wants to buttonhole you and make you toe a line that may not always suit your own purpose.

Bryson is a man who thinks outside the square and as a true creative doesn’t want to be given ‘boundaries’ or be ‘buttonholed’ by others, especially with his writing, a position I must say I fully understand. It’s his passionate interests and lively curiosity that drive him on. In the movie his English born wife ‘Cathy’ played by Emma Thompson is alarmed by his sudden desire to commune with nature, which he expresses following attending funerals of friends now dying.

So she keeps insisting that if he is going to make this journey he must take someone with him if not for anything but her own peace of mind, because she has heard and read so many terrible stories about what has happened to some people traversing the trail. Bryson told us this is a very real concern, just having read a report about a hiker being eaten by a brown bear in Yellowstone National Park just before he was to appear on stage.

While we may not have brown Bears in Australia, we do have brown Snakes and the world’s deadliest spiders, so we can relate to Cathy’s concerns.

So he gives in, and starts ringing around only to find most of them think he’s crazy. Then out of the blue he has a call from a friend from the past, one of the many left in the wake of life and his career who has heard about his journey from a friend of a friend, and wants to join him. 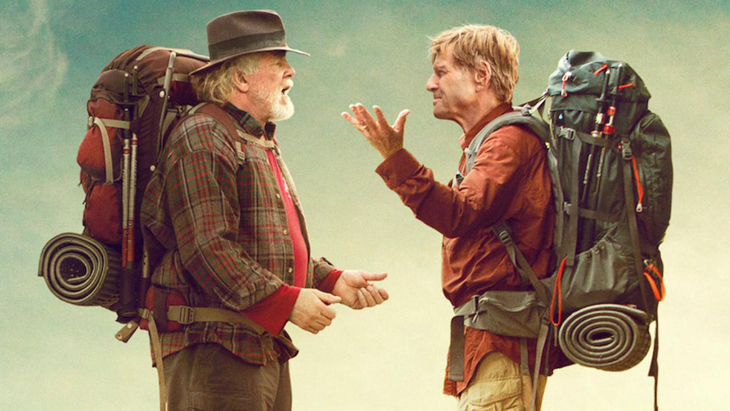 Both Bryson and Katz have walked very different pathways since college days. Bryson pursuing his own academic bent followed by a writing career, while Katz, which he doesn’t discover until they are well along the trail, is fleeing from some minor scrapes with the law and endeavouring to sober up.

Bryson’s breezy style and good humoured nature made him the ideal companion for his ‘mate’ Katz who basically he hasn’t seen since they spent many youthful years together. This was when they were both boozing themselves silly and getting into scrapes together, most of which Bryson would like to forget now he’s a model citizen. Going on a journey and ‘facing savage weather, merciless insects, unreliable maps and a fickle companion whose profoundest wish was to go to a motel and watch The X-Files, Bill Bryson gamely struggles on through the wilderness to achieve a lifetime’s ambition – not to die outdoors’

We don’t want to reveal too much of what happens along the way in this delightful tale of two friends remembering what it was like to forge life long bonds together that are stronger than the times spent apart. It’s a delicious journey you need to go on for yourself.

Bill Bryson wrote about Australia and Australians “In a Sunburned Country’ taking his readers on a rollicking ride far beyond the beaten tourist path, telling the world how cheerful, extroverted, and unfailingly obliging we are so we can but hope they will turn out in droves to support its release. I am sure that will include a number of Australians wanting such an experience themselves.

For the rest of us, well there is the book and now the movie. All I can do is urge you all to take a hilarious hike with Bryson and Katz along the Appalachian Trail and try not to ‘die’ laughing.

A Walk in the Woods

The news from the corporate world that Apple CEO Steve Jobs is for a second time on medical leave, this time indefinite, is very sobering. For someone whose whole adult life seems to have been in one way or another connected to Apple computers, it is with some ambivalence that I reflect on what that means for Apple, and the world at large, when their powerhouse executive is no longer guiding the helm.