There may be a point reached in all our lives when we must decide to draw a line in the sand about what we consider is reasonable and what we know is reprehensible. American citizen Maria Altmann (nee Bloch-Baur 1916-2011) reached that point following a defining event in 1998 – the death of her beloved sister when she was 82 in 1998. She had been a refugee from Nazi Austria in 1938, when together with her husband she fled from her homeland Austria via the Netherlands, to make a new life in California in America.

Like many others, she was forced to flee with only the clothes they stood up in.

Following her sister’s funeral she received a letter from Hubertus Czernin a Vienna born and based journalist with a passion for the truth. He wrote to Maria giving her vital information that might help her regain five paintings left to her by her aunt that had been stolen by the Nazi’s.

In that same year the Washington Principles on Nazi-Confiscated Art was signed by 44 countries, including Austria. The Austrian Parliament passed its own law requiring museums to allow researchers to explore their archives in order to have plundered items returned to their rightful owners. Czernin believed in restitution for descendants of Jewish refugees, who suffered so much under the German Nazi regime.

During the 1930’s in many parts of Europe including Austria, the Jewish peoples were discriminated against, humiliated, stolen from and murdered because of their religion.

Adolf Hitler’s henchmen had seized Maria Altmann’s families treasures after she had fled. Discovering that their paintings were recorded as adorning the walls of Nazi officials throughout the war must have been particularly distressing. In 1999 Altmann began the process of gaining the restitution of five painting works, which included a portrait of her favourite aunt commissioned by Maria’s uncle from renowned Austrian Secessionist painter Gustav Klimt (1862-1918).

Klimt’s portrait of Adele was put on display at the Belvedere, Vienna from 1941. Adele’s identity as a Jewish woman was hidden; erased after the painting was removed from the walls of the Bloch-Bauer home in Vienna, where Maria Altmann’s extended family all lived together.

It was given the title ‘Lady in Gold’ by museum officials to hide the fact the lady herself had been Jewish.

Maria Altmann’s story is the subject of a landmark movie Woman in Gold featuring Dame Helen Mirren and Tatiana Maslany as the elder and youthful Maria Altmann, with Ryan Reynolds as her lawyer Randy Schoenberg with Daniel Bruhl as Hubertus Czernin.

As Maria Altmann states in the movie, when other people view the painting they see a wonderful work by artist Gustav Klimt.

However she sees only the aunt she loved, who was so kind to her as a child and left her treasures, including her portrait to her favourite niece Maria when she died. Over the course of 150 years since his birth Gustav Klimt has become a phenomenon in terms of the evolution of art and science, as well as the history of the world. His paintings accessible at the time are now worth a fortune.

His ‘golden phase’ when he used a great deal of gold leaf in his work (c1898 – 1908) was influenced by his travels to Ravenna, where he encountered Roman mosaics and the splendour of the ‘golden’ interior of St Mark’s cathedral in Venice. It was finished in oil, silver and gold on canvas.

The stunning necklace Adele wears in the painting left to Maria on her death, was stolen too. German General Hermann Goerring’s wife was photographed wearing it during the war.

The movie weaves the story set in early 20th century Vienna, the Nazi era and modern times together with considerable style and wonderful attention to detail. 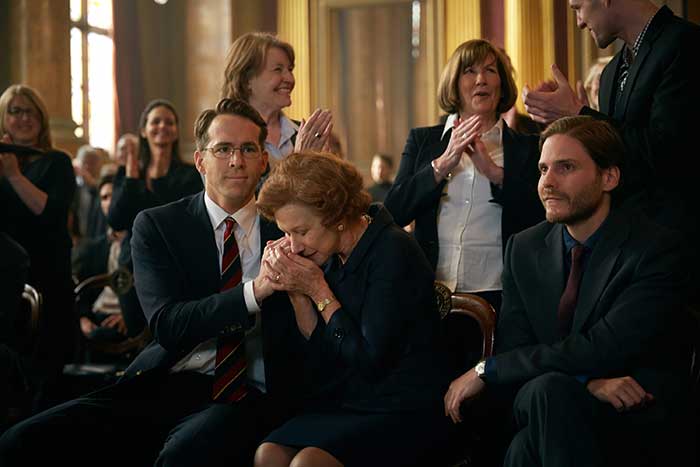 Randy is the grandson of the famous Austrian composer and painter Arnold Schoenberg (1874-1951) who with his wife had moved in the Avant garde circles of Vienna alongside Maria’s parents as best friends.

With his musical works labelled as degenerate because of his being Jewish, he moved to America in 1934 giving his own family a new life to look forward to. At that time he had urged his friend Ferdinand Bloch-Bauer to do so to, but he had failed to realise the urgency until it was too late.

Together Maria and Randy quietly take on the might of the Austrian government to claim restitution,  after seven years finally winning the landmark case and stunning the world in 2006. 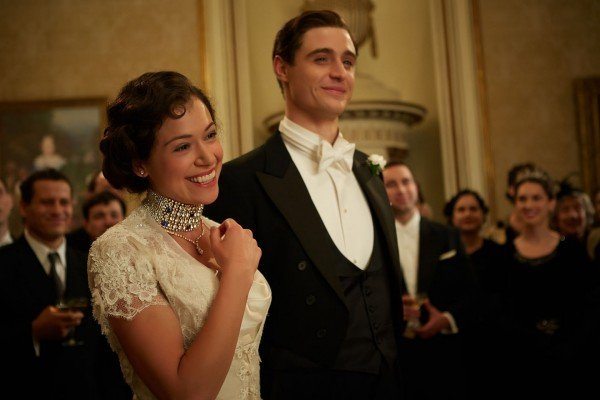 Their story told so well in the movie, is painfully revealed through a series of flashback memories with Tatiana Maslany playing Helen Mirren as a young woman wearing the lovely necklace her aunt had left her.

We see how happy the family were on Maria’s wedding day to her beloved opera singer fiancée Fritz Altmann, all the family together dancing happily and celebrating while looking forward to their future life.

Virtually within weeks of that happening however, they found themselves fleeing their homeland, in a brave and extraordinary escape that saw them arrive in the Netherlands from where they left for America.

This is a powerful story. Maria whose husband Fritz had died some four years before her restitution quest begins, has a successful fashion shop in Beverly Hills. She’s comfortable, although not wealthy just a woman seeking a way forward. 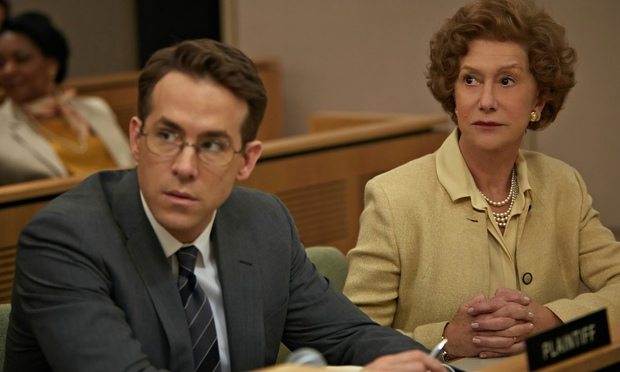 She chooses E Randol (Randy) Schoenberg to help her because he was to all intents and purposes, family and importantly knows she can trust him, descending as he does from those who suffered under the Nazi regime.

Randy believes they are in with a fighting chance, however his view is from a positive American perspective and not, as he discovers when he lands in Austria for the first time, from theirs.

Having been born in America Randy has no real idea of what his family went through in order to survive and give him the chances in life he has enjoyed, at least up until the moment he meets Maria. Going with her to Vienna opens his eyes.

Curators at the Belvedere claim the Klimt Woman in Gold and the other works had been left to the Museum in Adele’s will when she died. However, all she had done was ask her husband to gift them on her behalf and her descendants can rightly argue that was before she knew that the Nazi’s would march in and commit atrocities against her people.

Adele Bloch-Bauer’s husband Ferdinand had paid for the painting and had left them to his two nieces on his death.

Randy has a young wife who has just given birth to her second child. She offers him unconditional love and support and while his and Maria’s first journey to Austria bears some fruit, they are defeated on technicalities wherever they turn with mediation a complete failure.

The Belvedere executive team are particularly hostile and completely uncompromising. Randy and Maria discover if they want to file a lawsuit in Vienna they have to have millions of dollars capital, a percentage of the present value of property at issue.

Being by the now famous artist Gustav Klimt, each one’s value is now in the millions and so Maria feels utterly defeated.

Thwarted by the steely attitude and clever lawyers for the other side they both nearly give up. When Maria does, Randy is left to dig in alone. He buries himself in research endeavouring to find a loop hole, which he does. When in a book shop he discovers a publication about Klimt’s works being sold, featuring the five paintings that belong to Maria.

This is just what he needs to take the matter before the Supreme Court of America in Washington.

Together again and in the highest court in the land they invoke the “expropriation exception” of the Foreign Sovereign Immunities Act, arguing that since the claim concerned rights in property taken in violation of international law, and since Austria engaged in present-day commercial activity in the United States, Austria was not immune from suit.

Randy is more or less forced to leave his job if he wants to continue to help Maria, because having met with her and got to know both his and his own families story, he feels compelled to see her quest through as far as he can go.

Charles Dance in a cameo role plays Randy’s cold-hearted lawyer boss with severity of style. He won’t support him, and so Randy is forced to quit and go it alone.

Going back without Maria Randy takes on the Austrian Government, demanding arbitration, which he finally achieves.

He delivers what is a brilliant speech before the panel of three people chosen by the Government to decide if restitution is deserved. Just as he begins Maria arrives, realising she must be at his side.

The panel after deliberation on all the facts amazingly decides in Maria’s favour. Restitution by the Austrian government is ordered and made, the paintings returned to Maria in America. 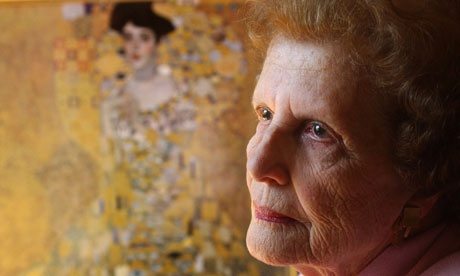 It would be 2006 when the court decision that attributed the ownership of the painting to Maria Altmann came to fruition and the niece of the Bloch-Bauers saw the paintings arrive in New York.

Maria Altmann sold the Woman in Gold for 135 million dollars to Ronald Lauder, who had approached her in Austria prior to the executive decision, extracting a promise from him that if she gets her famous painting back he would promise that it would always be on show to the public at the Neue Gallery in New York City if she sells it to him. So she does.

The other four paintings were sold at auction.

Those of the same age as Maria, and certainly at my stage in life would completely understand her desire to convert them to cash.

It would enable her to share the funds with her sister’s children and her own, giving them all some feeling of financial security, having been forced to escape with only the clothes on their backs. Giving this film a rating was difficult; it’s a quiet resolute progression well acted and the fascinating story beautifully told and presented.

My elderly companion, who is over a decade older and has survived in a war zone, both on reflection believe The Woman in Gold not only put the case before us well, but also saw the actors shine in their roles.

While Helen Mirren and Ryan Reynolds were both excellent, Tatiana Maslany as the young Maria Altmann, and the very beautiful ‘Woman in Gold’ herself, German actress Antje Traue both shone like gold.

I felt elated that Maria had seized the day and stood up for human rights.

I was so excited said Rose Niland, sharing old and new memories with my adult daughter at The Pointer Sisters concert, where everything old was made new again