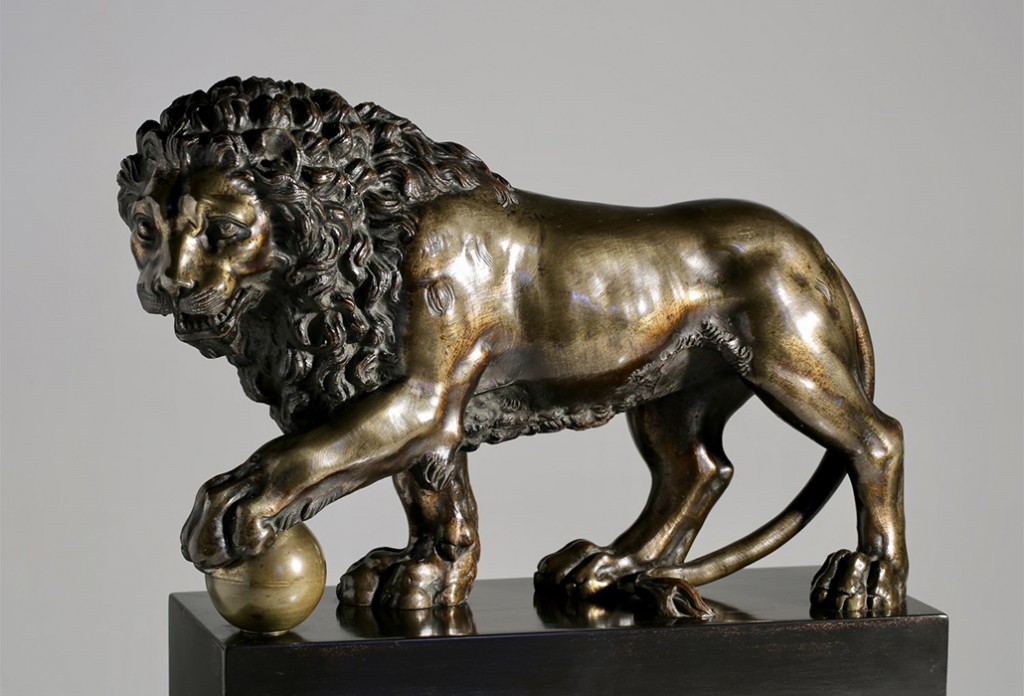 Medici type bronze lion: An early 19th century Italian bronze lion, after the marble version carved circa 1594 by Flaminio Vacca for the Medici Villa in Rome, itself a companion to the Ancient Roman version in the Medici collection from the 1st or 2nd century AD. This particular example very well modelled and with a beautiful patina including traces of the original lacquer and a lovely strong presence. On a modern ebonised wooden plinth. Circa 1820. 33cm long (34cm with plinth) courtesy Brans Antiques & Art

Leading dealers, members of the Australian Antique & Art Dealers Association (AA&ADA), will gather from today in Sydney, August 16 – 19, 2018 at the White Bay Cruise Terminal, Rozelle, where they will present a wondrous array of art, antiques, design and stunning love jewellery for sale.

There will be an appraisals day, when you are able to take along your own items and talk to one of the dealers. Available on Stand 14, Sunday August 19 from 12 noon to 3pm. There is a fee charged, for up to three items, with proceeds going to The Children’s Hospital. A broad appreciation of the history of art, design and styles and an understanding of terminology is helpful when assessing the quality and integrity of the wares on view.

Surrounding ourselves with items of aesthetic beauty fulfills a deep emotional need within us all. Collecting can become a great pleasure and many people become ‘hooked’ on the search for that special piece, forgotten, unappreciated and unloved. You can enjoy each acquisition and it is also a pleasure for your friends and relatives who, when they arrive to visit, discover something new, of great interest and beauty. The art of glass making from the Romans to the Modernists such as French genius Emile Galle (1846-1904), and onward to the contemporary world of American sculptor Dale Chilhuly, is appealing. Surely of all the ‘created things’ in the world perhaps nothing is quite as magical, more marvellous, or indeed more enchanting, than glass.

Where would we be without glass in our lives. The mystique surrounding it only adds to its romance. Glassmaker Emille Galle lived in his own world; a mysterious temple no one enters into without awe and bewilderment.

Lynzay Antiques from Queensland is offering a stunning original Yellow and Brown Autumn coloured glass vase signed by the master Emile Galle, which would be knock out in any interior. 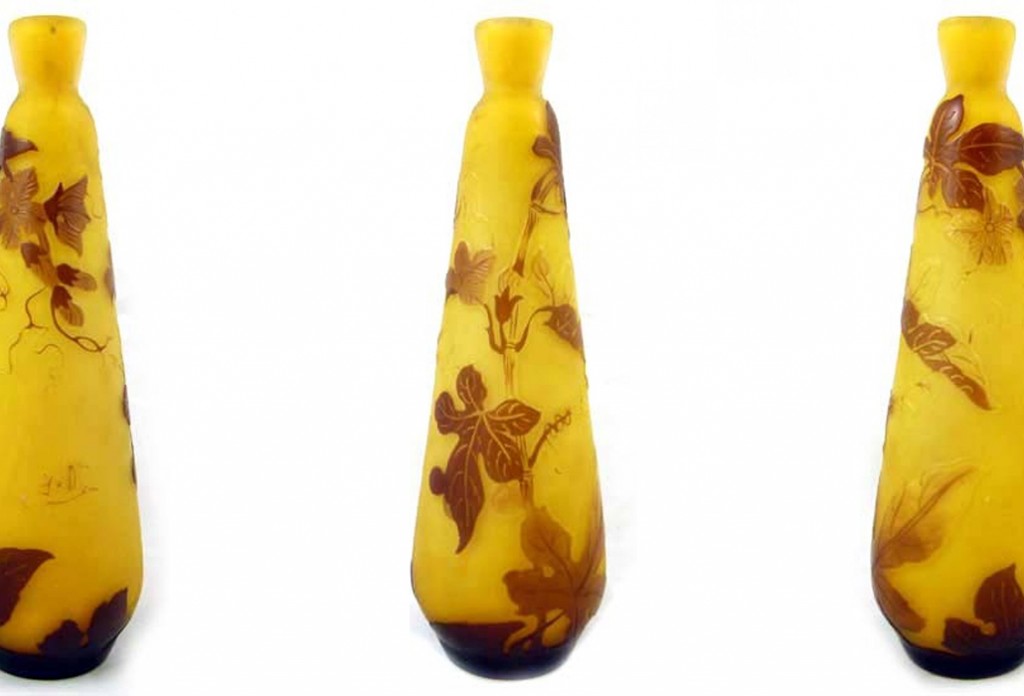 He worked in the style we know as Art Nouveau which originated in the 1880’s at Paris and was characterized by fluid, curvaceous lines. ‘Grace and beauty are its outer clothing. In its depths shines the flame of the spirit’ said social art commentator Roger Marx (1859-1914).

Galle blended poetry and philosophy with the physical material, rendering works in glass, ceramics and also in wood. He perfected the cameo technique as it descended from the Romans until his own age of elegance. 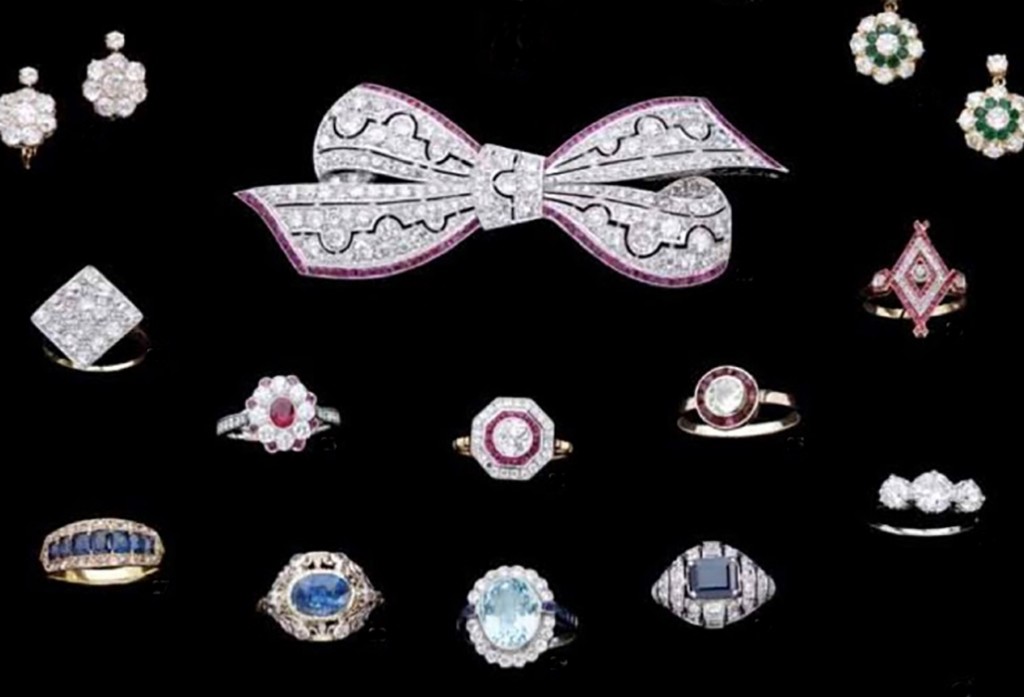 If this is your first visit to an antiques fair you will be better equipped to evaluate the quality of design, materials and craftsmanship of the display if you learn how to distinguish the ‘rare from the ordinary’ and the exquisite from the mundane’.

Hone your skills led by specialists in the field, all of whom have earned their reputation as Australia’s finest antique and art dealers. They have spent their lives gaining considerable expertise in their chosen fields and will actively help you to expand your knowledge too. 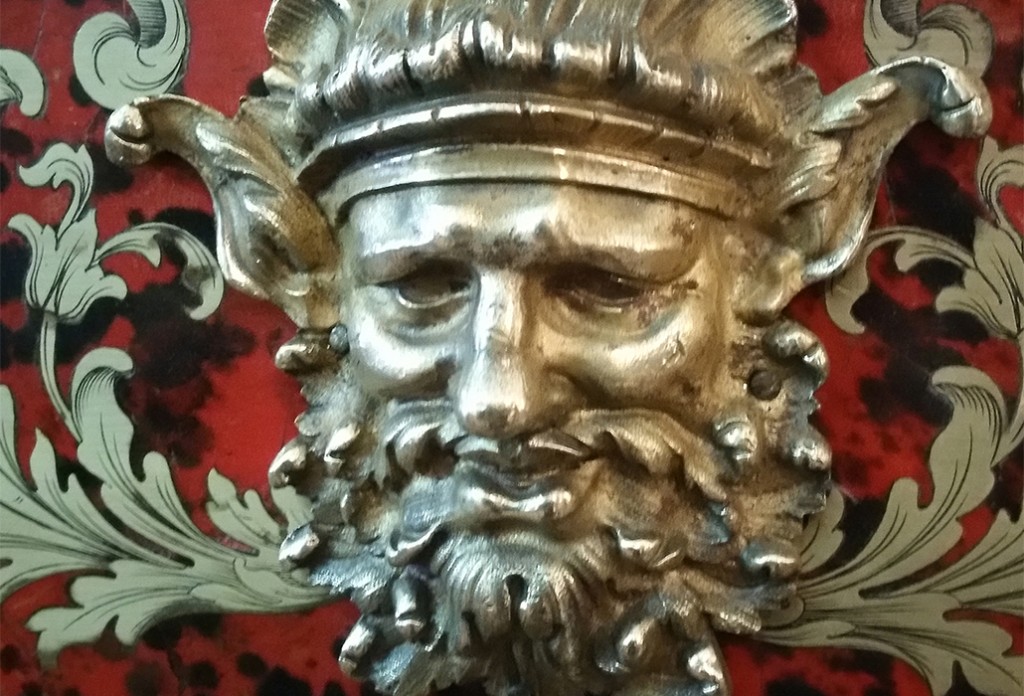 From a nineteenth century French Boulle bureau plat offered by Lauder and Howard Antiques and Fine Art, which is engraved with so-called ‘Berainesque’ designs to a magnificent Karelian Birch dining table and chairs in the Art Deco style, fine furniture will be a highlight.

French designer Jean Berain the Elder (1640-1711) prepared light whimsical designs. They were very much in vogue by the early eighteenth century, the influence of the orient easily discernible. His son Jean Berain the Younger (1678-1726) carried on his father’s work and kept his designs in play well into the era when the assymetrical Rococo style was preferred (c1730-1760).

The French bureau plat c1840 has inlaid brass work finely engraved following a technique first pioneered by Andre Charles Boulle in the seventeenth century, producing stunning furniture for French royalty and aristocracy. This desk has a fine Provenance: The Lord Beaumont, Carlton Towers, Yorkshire… down to the current Duke of Norfolk. 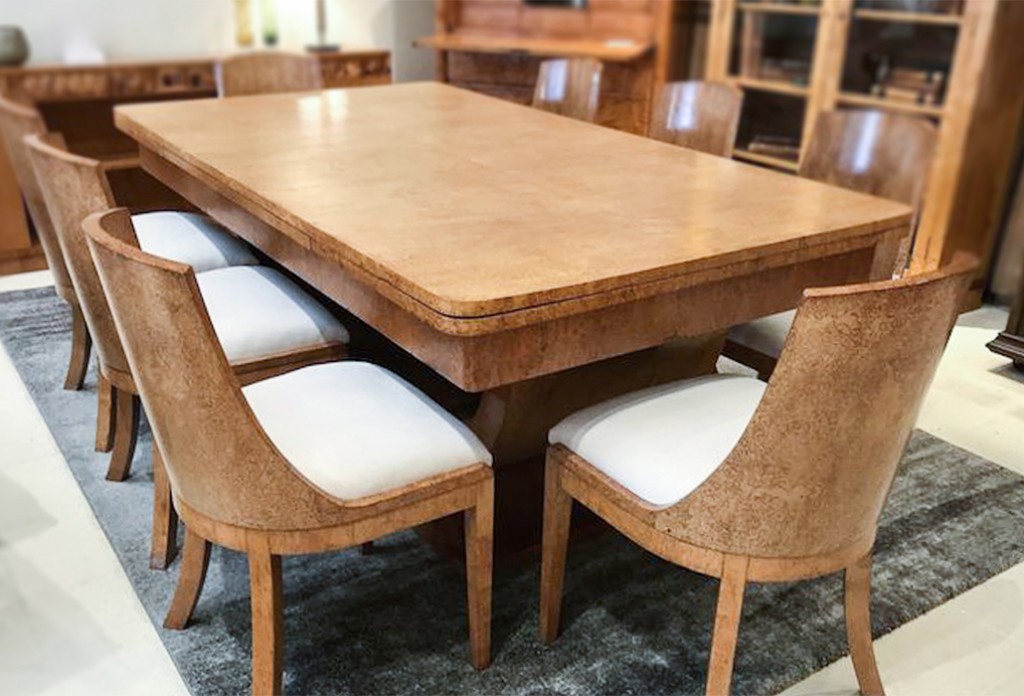 Magnificent Karelian Birch Art Deco dining table with two extensions to three meters. With eight matching solid curved back chairs which have been reupholstered in a macro suede fabric.
The table has a ‘C” curved support which rests on a shaped base. Date C1930, courtesy Virtanen Antiques

The Art Deco movement swept through Europe and the United States during the 1920’s and 1930’s and was more than a new fashion. It heralded the beginning of the modern age of design with furniture that was simple in concept, geometric in form and highlighted by dramatic lines and elegant curves.

As today we are in the great age of recycling, purchasing antiques for your home makes good sense. Also, with careful choices you can over a decade, choose a few special pieces that will add to the atmosphere and ambiance of your home and become an investment. 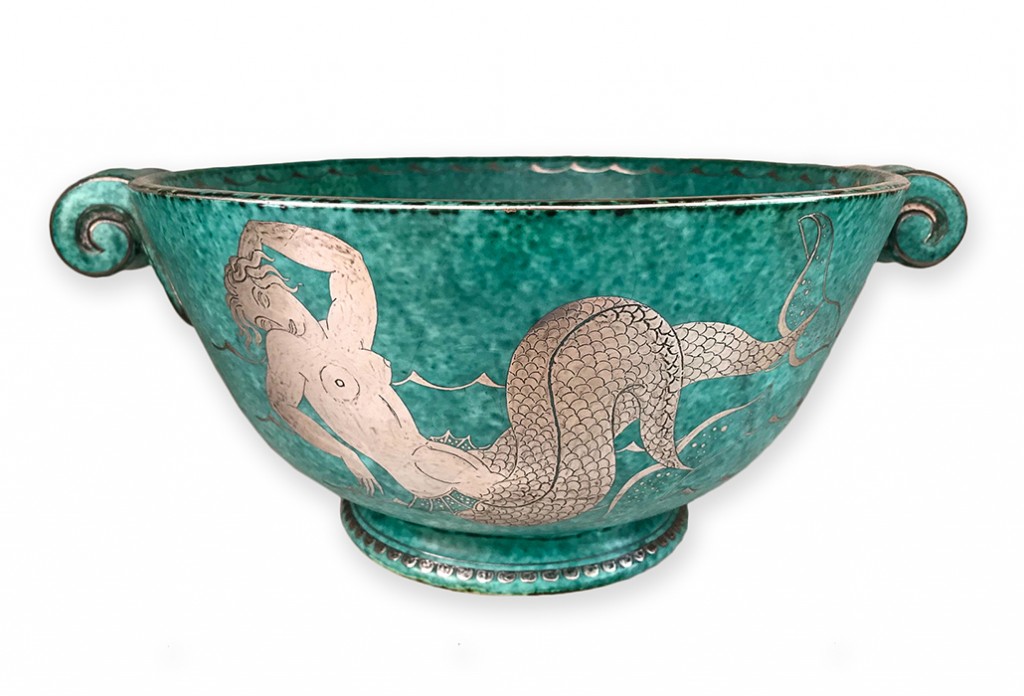 An Exceptional early Art Deco signed Argenta dish with sterling silver inlay depicting an intricate decoration of a mermaid on both sides, Designer Wilhelm Kage for Gustavberg Sweden Date C1930. This is a rare piece due to its large size. There is a similar piece in the National Museum in Stockholm, courtesy Virtanen Antiques

Of the wonderful and rare objects on display at Virtanen Antiques there is an exceptional signed Argenta dish with sterling silver inlay, with a mermaid frolicking on both sides. 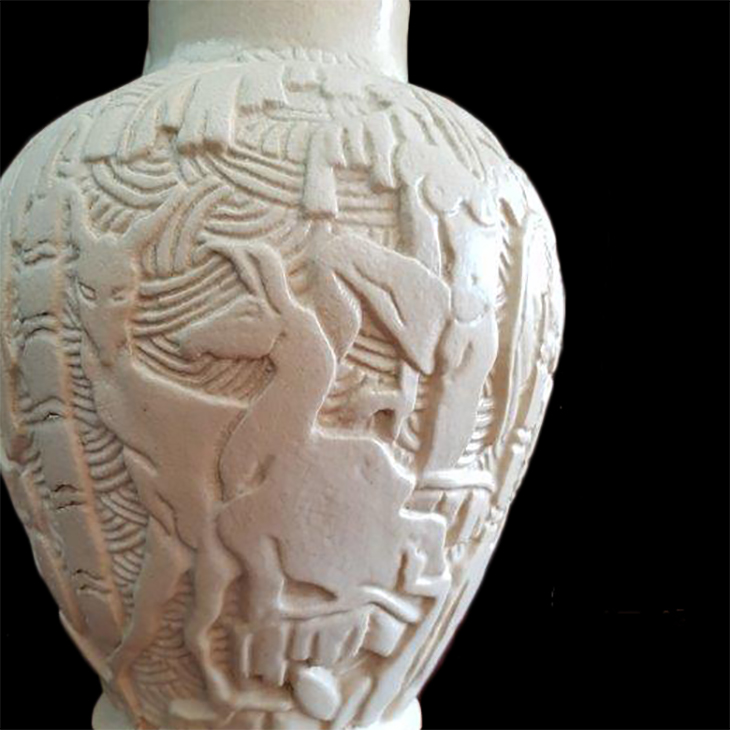 This would sit happily in a room with another glorious 1936 Australian pottery vase incised with modernist motifs.

Presented by Elizabeth Syber, it was designed by Loudon Sainthill a renowned Australian born Australian artist and stage and costume designer who worked predominantly in the United Kingdom. He also won the Tony Award for Best Costume Design. A stunning work of art, the vase  is hopefully destined for an art gallery or museum of note. 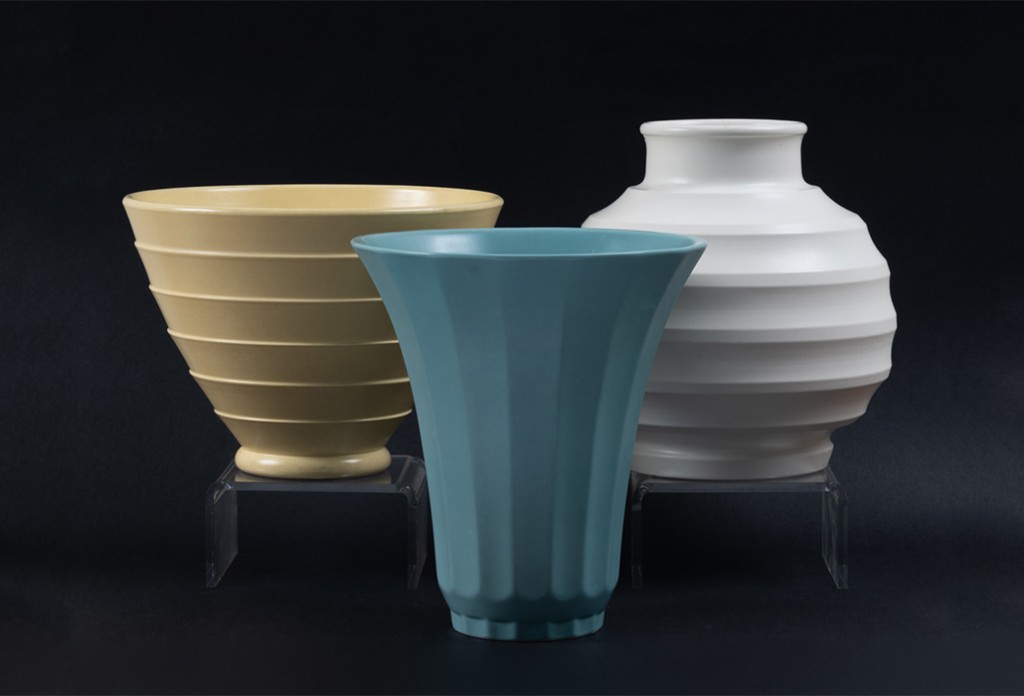 Staying with the Art Deco Style theme, Sydney dealer Alan Landis who specialises in English Ceramics and Australian Decorative Arts, has a trio of vases by Keith Murray for Wedgwood.

NZ born Keith Murray was both an architect and a potter and both his preferences in design are reflected in their ‘stepped style c1930. The simplicity of their design suited style then as it does now.

Another of my aesthetic choices from the objects on show offer by Bran Antiques and Art would be a pair of Meiji period cloisonné enamel vases, with silver wires and silver mounts. 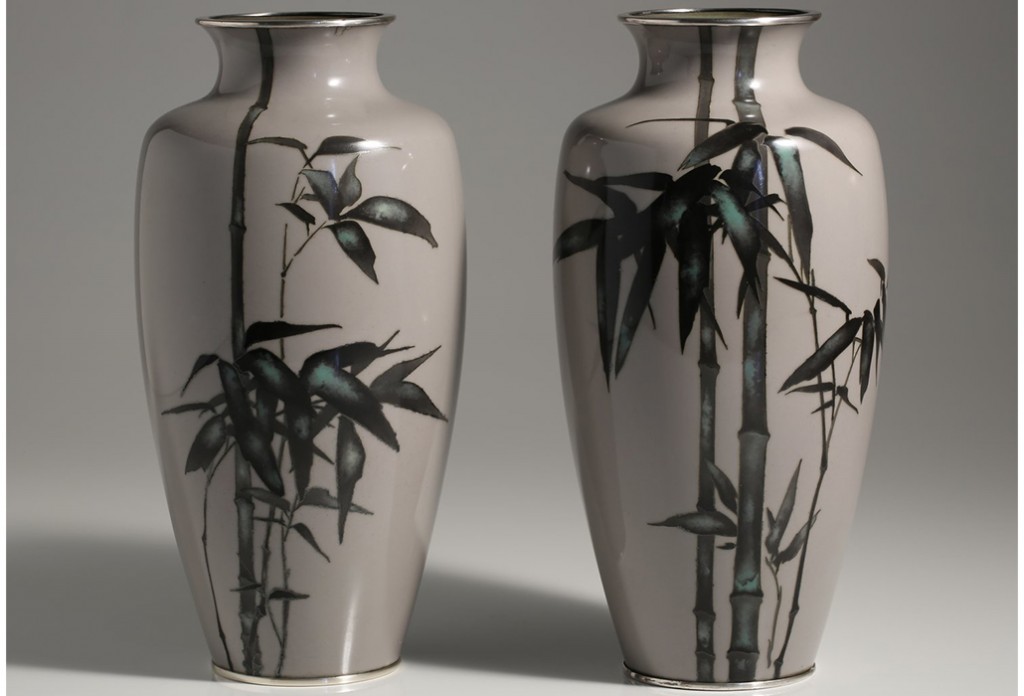 Their decoration reveals a preference for asymmetry, a long tradition in Japanese art encouraged by Taoist and Zen teachings, which intellectualized it as an element, now characteristic of, Japanese aesthetics. Decorated appealingly, they feature stands of bamboo. A product of nature which has a tensile strength and bends in the wind, bamboo does not break, and over the centuries we have learned to appreciate its many qualities. 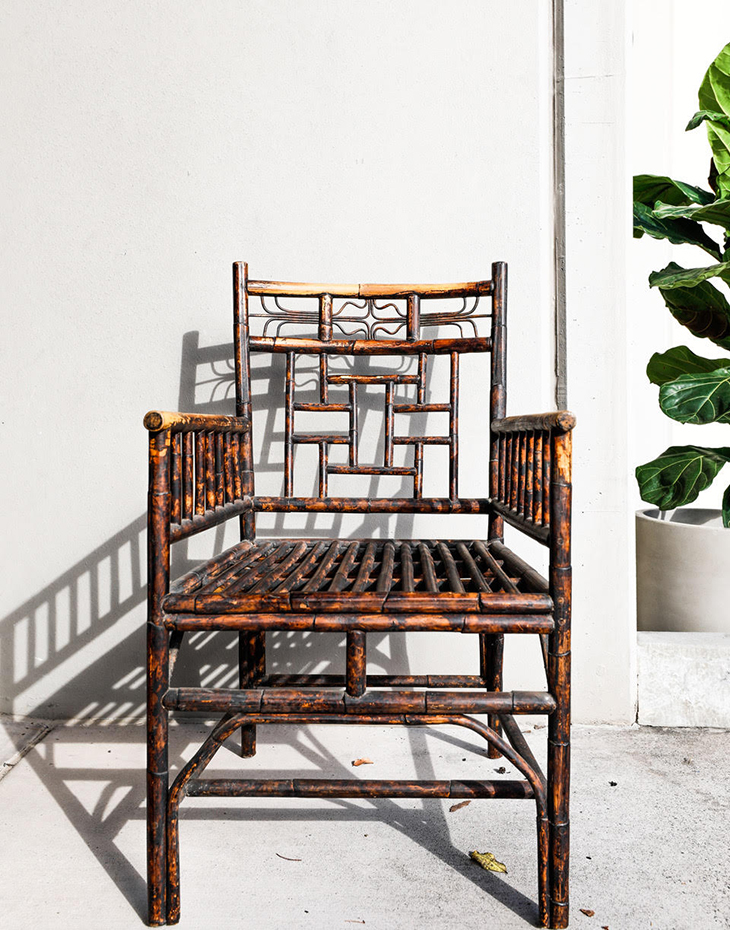 Staying with the bamboo theme and purely decorative and charming is a set of dining chairs with arms, also made of this material, sporting a tortoise shell finish with caned seats.

Circa 1900 and presented by guest exhibitor The Find Antiques, Queensland, they would suit many budgets and take their inspiration from works by Thomas Chippendale, the foremost cabinetmaker of the eighteenth century in England. They are in the Chinoiserie taste.

By the late 17th and early 18th century in England and Europe the fashion for all things Chinese assumed incredible proportions with visual images of the magical land of Cathay preferred.

The design style known as Chinoiserie was the ultimate outcome of their preference for pagodas, porcelains and personal priceless possessions passionately pursued.

Unlike other styles, eventually replaced by another, Chinoiserie has never really left us and its abiding images have endured right through until today. 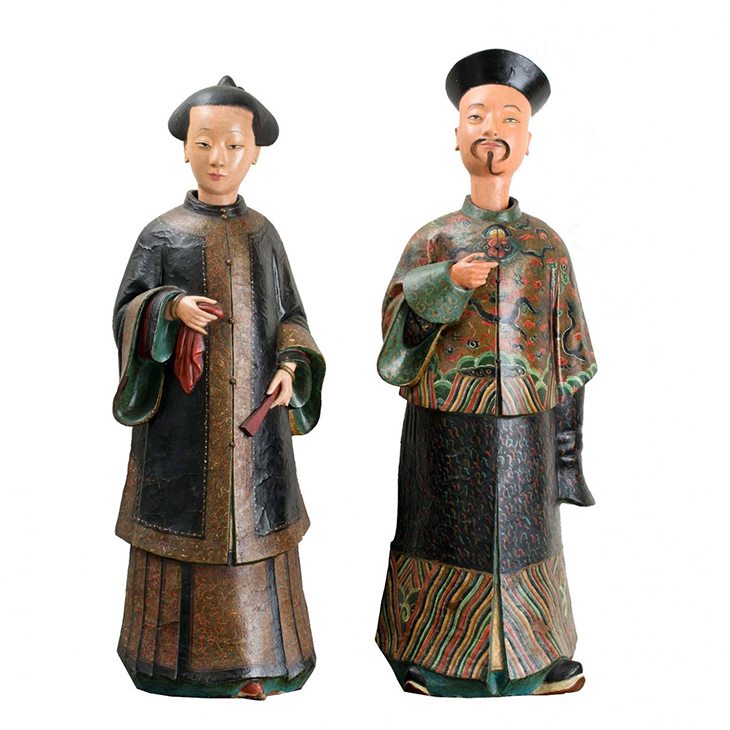 For those looking for the rare and precious, there is a delightful pair of early nineteenth century Chinese Nodding Figures, similar to those in the Brighton Pavilion of King George IV of England.

Offered by Martyn Cook Antiques they are immediately appealing and skilfully made of papier-mache, which was then painted with polychrome decoration, a method that became the rage in the early years of the century. 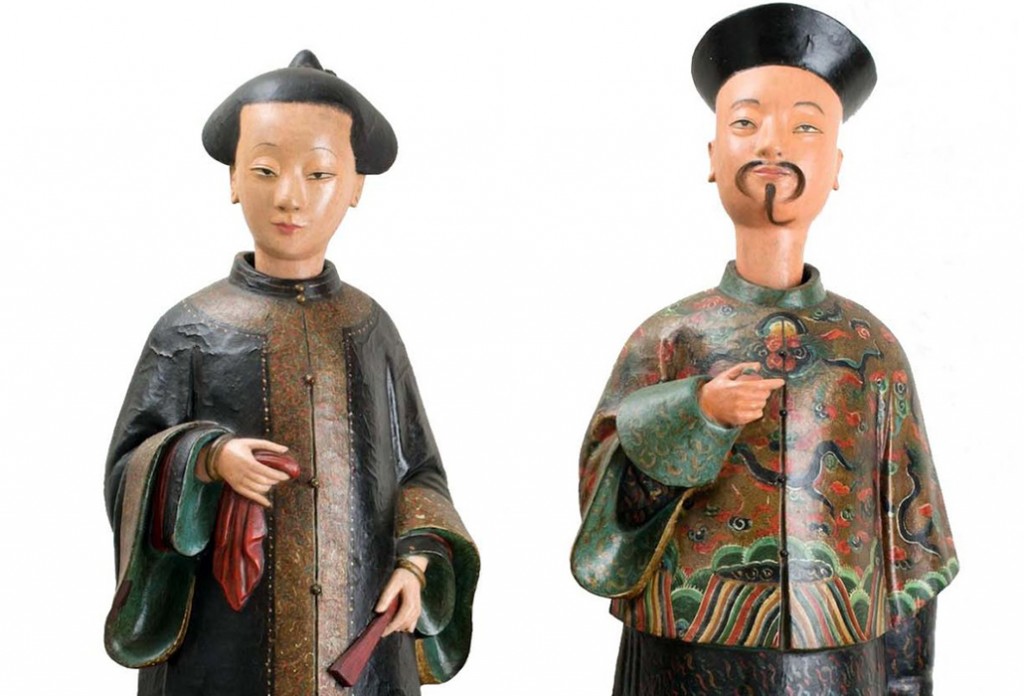 Collecting can become a great pleasure. Many become ‘hooked’ on the search for that special piece, forgotten, unappreciated and unloved. The ability to judge authenticity may seem difficult for the layperson and this is where a knowledge gained through education is important, as well as establishing a working relationship with a qualified antique dealer. ‘

All reputable dealers point out deficiencies, the amount of restoration in a piece or any changes that may affect its value both for purchase or resale. Also, you need to establish a budget for collecting, in order that you and the dealer understand your considered constraints.

There are many great treasures out there waiting to be found. If you aim to collect say one of the very best quality examples from any period of your choice annually, within a decade, which goes very quickly, you will have ten marvellous things to admire.

Sherlock is back for Series 3, enjoying the thrill of the chase with Watson, the blood pumping through their veins as the dynamic duo take on new challenges