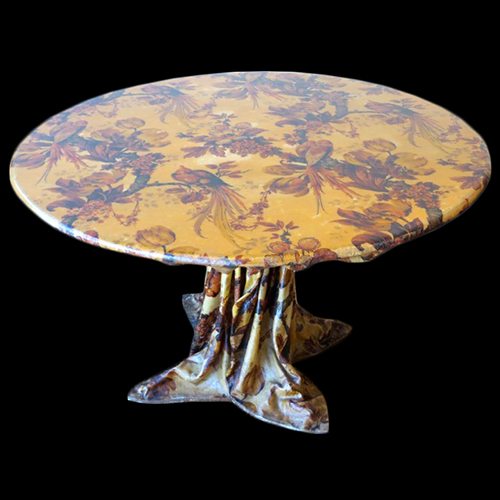 Melbourne dealer Jamie Allpress of Allpress Antiques has been in and around the antiques trade since he was 11 years old when he worked in the local antiques shop in his school holidays.

He is currently celebrating some 33 years in the business and will showcase some wonderful antiques and decorative arts at the AA&ADA Sydney Antiques Fair 27 – 31 August, 2014

To be held at Randwick Racecourse, the annual antiques and art event is always popular with Sydneysiders.

Booking tickets is advised. Last year the crowd on opening day was enormous.

Jamie Allpress has a simple philosophy one that ensures that what he offers his clientele is the very best that it can be.

He specialises in English country and French country style. However from time to time he also turns up the rare and unusual.

A table he is offering this year certainly fits that bill well. 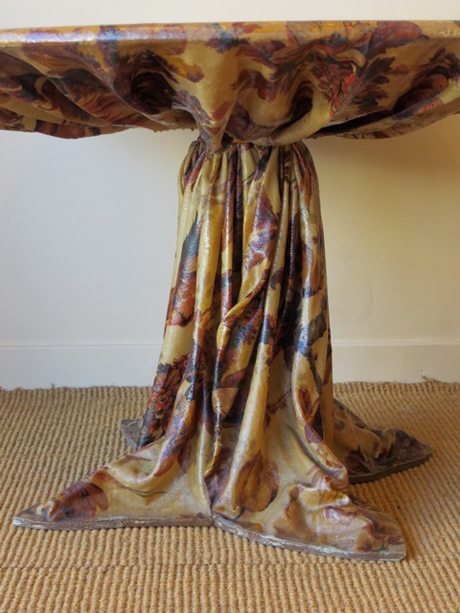 It’s an American Retro Fibreglass Centre Table, which is a ‘one off’ round table with a tablecloth incorporated into its design. .

While it may not be an antique it features autumn tones with birds and foliage and the base has been moulded to resemble falling fabric.

The table was selected by notable Melbourne decorator Colin Bowman for his client Madame Verna Greene who was passionate about antiques.

She was also an icon in Australian hairdressing circles and established the Melbourne College of Hairdressing and Beauty Culture back in 1963.

When she died in 2012 aged 96 she left an impressive legacy of style and eleven salons throughout Australia.

Her home at Wonga Park in Australia built in 1982 was both decorated and furnished by Bowman. It was full of fine collectibles, including this amazing piece.

Jamie Allpress secured the table and loves its eccentricity as a one off piece someone is sure to adore.

Allpress Antiques also offers a consulting service helping people with contemporary interiors to find just the right mix of both old and new. While the show is in progress in Sydney Jamie’s latest shipment from England will be arriving at Melbourne. 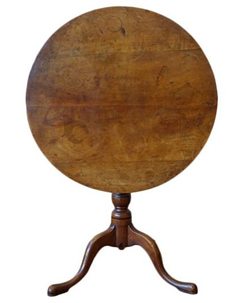 In it is a rare 18th century English country wine table.

What is so special about this table is entirely made of fruitwood.

This was the timber that was a mainstay of the Tudor and Stuart eras in England and has gone in and out of fashion over the centuries.

The fruitwoods used were usually apple, cherry and pear. These are all pale brown, medium lightweight and close grained timbers.

Pale pear was used as an ornamental banding and as a ground for lacquer work during the late 17th century. The redder cherry was also occasionally used decoratively

The table top has been well loved and used, it’s many marks and faded colour contributing to its overall patina.

This table has a circular tilt top, which means it can also be stood up against a wall when not in use.

This can be a very handy feature, especially today when we all live in increasingly smaller spaces.

It’s on a very elegant central column that terminates with out swept and very desirable simple out-swept cabriole legs with pad feet.

For those who enjoy being the next person to admire its charms and want to safeguard it for a while this is an important and desirable feature.

This one dates c1790 and is part of the ‘country’ furniture tradition. At Allpress Antiques Jamie Allpress also has a delightful French oak carved centre table on offer.  It is of pleasing proportions and has a moulded three plank top that would work well in many interior settings. The shaped floral and leaf carved frieze surrounds the table, which has a central shell motif in the centre of each of its four sides.

The curvaceous foliate designs define and flow gracefully into the table’s gently shaped elongated cabriole legs, which have decorative knees and terminate in tiny scrolled feet.

Dating from 1800 it’s a highly desirable piece of furniture and is the a very useful table to consider.

Recycling such furniture makes more sense than ever before, and so if you want to set trends not follow them there should be a table at the AA&ADA Antiques Fair or otherwise in Allpress Antiques showroom or stockroom at Malvern, Melbourne that will be sure to suit your decorative style.

In his final year at the helm of the Queensland Ballet Francois Klaus has lost none of his passion or the commitment he is renowned for in imagining Wonderland.