The Royal Exhibition Building in the Carlton Gardens at Melbourne is of ‘historical, architectural, aesthetic, social and scientific significance’.

The building and its setting is a glorious remnant of the Victorian age at its best, a powerful place to spend time grabbing a precious moment in the heart of a bustling city of the 21st century.

Setting aside this parcel of land for public use was the vision of Charles La Trobe (1801-1875) the Superintendent of the Port Phillip District of New South Wales, who became Lieutenant Governor of the colony of Victoria when it was declared a separate state.

Following several years of lobbying by Melbourne City Council, The Royal Exhibition Building and the Carlton Gardens the precinct was inscribed on the World Heritage List in 2004 during the 28th session of the World Heritage Committee held at Suzhou in China. The glorious painted interior décor of the building was restored during the late 1980’s and early 1990’s.

Today it’s wonderful to stand inside and look up at the balcony’s that surround the enormouos hallway, imagining crinoline clad ladies and top hat attired gentlemen looking down onto the wonders on display at the opening of the first Melbourne International Exhibition in 1880 when it was first completed.

La Trobe’s personal motto was whoever seeks shall find”.

How appropriate then this building in the gardens he had the vision to allocate is the venue to house the Australian Antique & Art Dealers Association Melbourne Antiques Fair, 2014.

Today I am sure La Trobe would have been pleased to come back and see it full of stalls offering very appealing goods, many of which he would have recognised.

Polymath Leonardo da Vinci (1452-1519) believed sight was a man’s highest sense, because it alone allowed him to enjoy an experience immediately. How right he was. This year’s fair was a wonderful occasion to not only look, but also see.

It was a very relaxed happy occasion for many, at least judging from all those generous people I spoke to as they wandered about exploring, looking, choosing and buying treasures from a sensational array of antiques and art. Selection of Antiques and Art as well as objects of Virtu on Allpress Antiques Stall, AA&ADA Melbourne Fair 2014

They recognised that the ambiance provided by the architecture itself created a wonderful and lasting impression.

Without doubt they approved of the new layout of the fair, which many of them described to me as being far more personal, far more intimate and definitely much more accessible.

They were also pleased there seemed to be something there for everyone, an artwork, an object or a collectable that would have suited many tastes and budgets and a great many pieces found their way to new homes.

The antiques and art dealer’s had all gone to a lot of trouble with their stands, either resembling warm and inviting living rooms you really wanted to step into, or a fascinating cabinet full or curiosities and splendid objects of Virtu you wanted to take home and enjoy.

Objects of Virtu were a special focus for Allpress Antiques of Malvern, Victoria. Jamie Allpress and well-known botanical artist Mali Moir are currently collaborating to produce beautiful drawings of selected objects for sale from his collection. Mali Moir has completed three so far; one of a stunning Deco reproduction of a 17th century style chandelier, another of a 19th century China Trade dragon decorated tureen with the final one being of a Deco style ceramic lion. Allpress Antiques also offers fine country furniture and botanical art works, many by Basilius (Basil) Besler (1561-1629), whose works portray the ‘botanical richness of the garden’ during his age.

This was when the science of botany broke away from medicine, to which it had long been subordinate and many new flowers were introduced to the public in countless books.

Before Besler’s day illustrations of plants were about providing a means of recording there many and varied parts for posterity and he certainly transformed the botanical landscape with his beautifully rendered aesthetically pleasing imagery.

On the subject of art next door to Allpress Antiques was Day Fine Art from glorious Blackheath in the Blue Mountains of NSW offering rare works that were aesthetically appealing and of historical significance. I particularly enjoyed seeing the gentle work by Austrian artist Eugene von Guerard (1811-1901) who spent a great period of his life in Australia.

His Unweit Cumae Bei Naepe (Not Far from Cumae Naples) c 1840 is a rare view of the Mediterranean in days of yore. 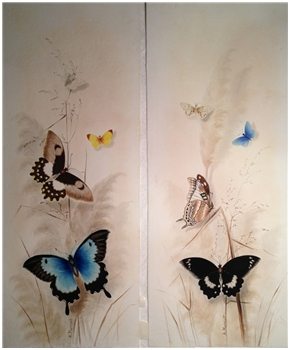 Eugene von Guerard lived in Naples after 1832 and painted landscapes in Southern Italy and Sicily over a six year or so period before moving to Dusseldorf for a while, sailing to Australia lured by the gold rush in 1852.

He travelled in Australia extensively recording the landscapes he encountered during the mid 1800’s. He took on commissions for wealthy pastoralists, recording their properties and dwellings and by the early 1860’s was the foremost landscape artist in Victoria and the colonies.

Alan Landis has been a leading dealer of historical Wedgwood for most of his career.

He not only had some fabulous 18th and 19th century pieces, but also some very smart Wedgwood from the Deco to the Retro age.

He had a stand out case full of stunning Meissen birds and also a pair of very rare Minton Cache pots, which certainly took my eye because of their wonderful sculptural qualities.

Alan is the official valuer to the National Trust of NSW and his eye for detecting quality, detail and rarity is second to none.

As a registered valuer under the Cultural Gifts Program and advisor to the Historic Houses Trust Alan Landis has valued the contents of Vaucluse House, Elizabeth Bay House, Rouse Hill, as well as the Sydney Town Hall collections.

Then there were glorious glasses, looking and otherwise, all of which refracted the light so splendidly.

They were all very enticing; although I would have to say one marvelous monumental glass vase by Emile Galle completely captured my attention.

As I have always been a glass collector this stunning piece decorated with exceptionally scarce design of Australian gum nut and gum leaves, made c1900 in France, certainly appealed to my sensibilities and aesthetic. It came from Walter & Co of Richmond right here in Melbourne. Walter & Co are specialists in 19th century Australian colonial furniture and objects. They were also offering some quite simply stunning cameo glass from Thomas Webb, also rare and desirable. Peter Valentine of Valentine’s Antique Gallery was at the top right hand side of the main aisle, offering a splendid array of 19th and early 20th century English and Australian furniture, porcelain, glassware and decorative items.

Valentine’s Antique Gallery is sited in Victoria’s central, and certainly very appealing city of Bendigo. He was showcasing a rather impressive walnut display bookcase c1860 with fine satinwood stringing and crossbanding as well as its original impressive figured ormolu mounts.

The creation of such fine furniture is dependent upon its requirements for social gatherings and entertainment and its design has always reflected changing conditions, new modes of life and ways of thinking, as well as function and use. It would make a statement piece in any personal or professional setting.

Walnut is such an attractive timber, smooth, lustrous and stable when seasoned, it has a fine even grain and texture, with a beautiful figure due to the annual rings, and it polishes well. Textiles hanging on walls or on floors or over tables are always appealing, especially to my sensibilities being an interior designer by trade.

The Behruz Studio offers a fine collection of rugs and textiles; the rare silk Heriz from the Azarbaijan region of North West Persia.

It was very special and they had put together an interesting selection from their extensive collection for their stand. Behruz offers his customers a wonderful selection from kilims and sumaks to decorative carpets, and from runners to tribal and village rugs, these wonderful eastern rugs are always very appealing because of their historicity and cultural significance.

Behruz moved from his homeland Iran to Melbourne and set up shop here in 1984. Since that time he has become one of its most respected dealers and advisors on historic textiles in Australia, one much admired by his peers.

The Behruz Studio were winners of the “Object of the Fair’ competition. Nomadic Rug Traders from Sydney also dealers in fine textiles, had a superb Shirvan Marasali prayer rug from the northern Caucasus and many other stunning textiles that caught my eye.

Glamorous glittering and fabulous jewels offered by Anne Schofield Antiques, Elizabeth Kwan, Antique and Unique Jewels and Rutherford, all of whom had many delights.

They were certainly grabbing the attention of those looking for that special present, engagement or wedding ring. Anne Schofield was offering a stunning ring, which caught my eye because of its subject and its ‘QI’ category.

It sported the face of a lady wearing a mask, probably for the Venetian carnivale. Surrounded by rubies, an important symbol of passion and love, it was very desirable.

The Mossgreen Collection had a very impressive stand, with a superbly put together collection of Australian art, Chinese, Asian and International tribal arts as well as European and Australia decorative arts to choose from. This is my personal favourite era of design and this piece was small and entirely too scrumptious, just right for today’s apartment living.

Wouldn’t mind tossing my keys onto each night as I arrive home. I have to say that I am always instinctively drawn by ‘cabinets of curiosities’ or things quirky and unusual and that are ‘quite interesting’ because I love the stories attached to many of them.

To that end I absolutely loved Greengrass Antiques from Sydney’s display.

Derek Greengrass had a wonderful array of ‘ethnographica’, which is goods gleaned from many cultures.

Derek possesses a fine eye and a very refined taste in all things wonderful and he hones in on things that are very unique.

His bronze sculptural figures of Mercury and Fortuna c1880 were on their own a stand out, although so many things caught my eye that I found myself in a personal wonderland.

He also had a very fine pair of rare silhouettes, another favourite category of decorative arts to collect in, although rarely seen in Australia even though many colonial immigrants to our shores either brought them with them or commissioned them here.

Walking to and from the Royal Exhibition building is always a happy experience. It is set in the glorious Carlton Gardens, where sweeping lawns, deciduous trees, artificial lakes and beds of old fashion annual flowers and shrubs form wonderful shapes. They are a punctuation of colour among long appealing avenues of sensational English Oaks and London plane trees, the rare today Elm trees as well as Conifers, Cedars and Moreton Bay Figs. They overshadow and set off superbly the still working fountains, as well as the Royal Exhibition building’s high Victorian architecture.

The AA&ADA Melbourne Antique Fair 2014 overall, held in this glorious setting and very special place was certainly a great success.