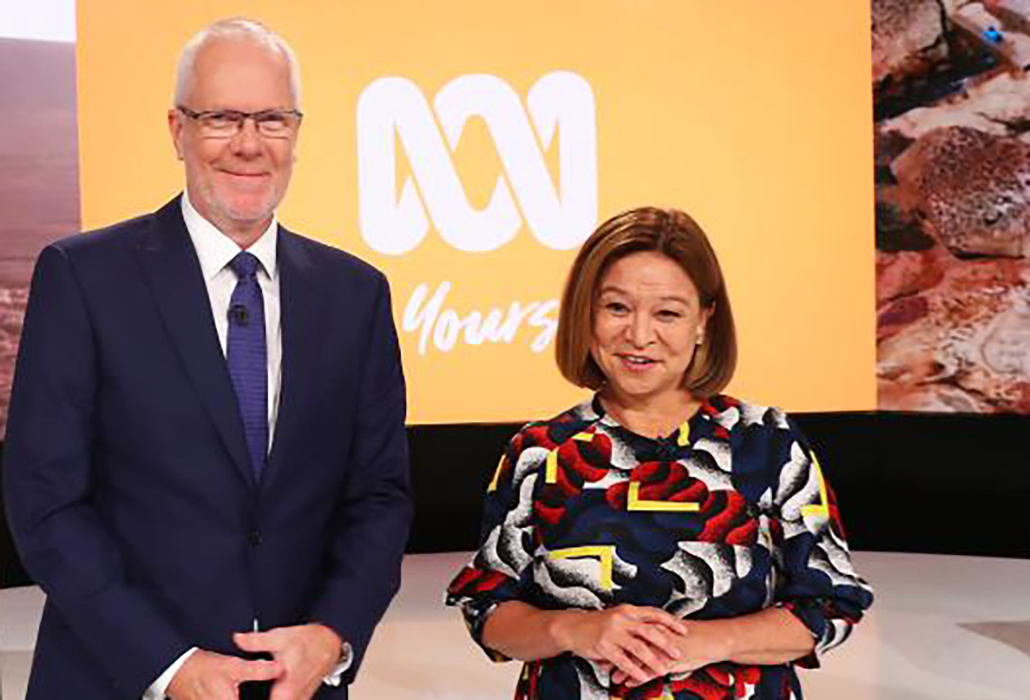 Independence, trust and quality, some of the key values revealed as important to their mission, were spoken about in a public forum at the first public meeting of every Australian’s ABC (Australian Broadcasting Commission), now and into the future.

The new Chairman, Board and Leadership Team Member Justin Milne said the meeting was a new innovation, all about assisting the public help he and his team ‘build the ABC for the future’, while acknowledging the important contribution it has made to the fabric of Australian society in the past and today.

It also allowed the executive to share their view with shareholders, we the public, that they need to ramp up its digital transformation to better reflect where its viewers are going so that they can and will remain relevant for decades to come. 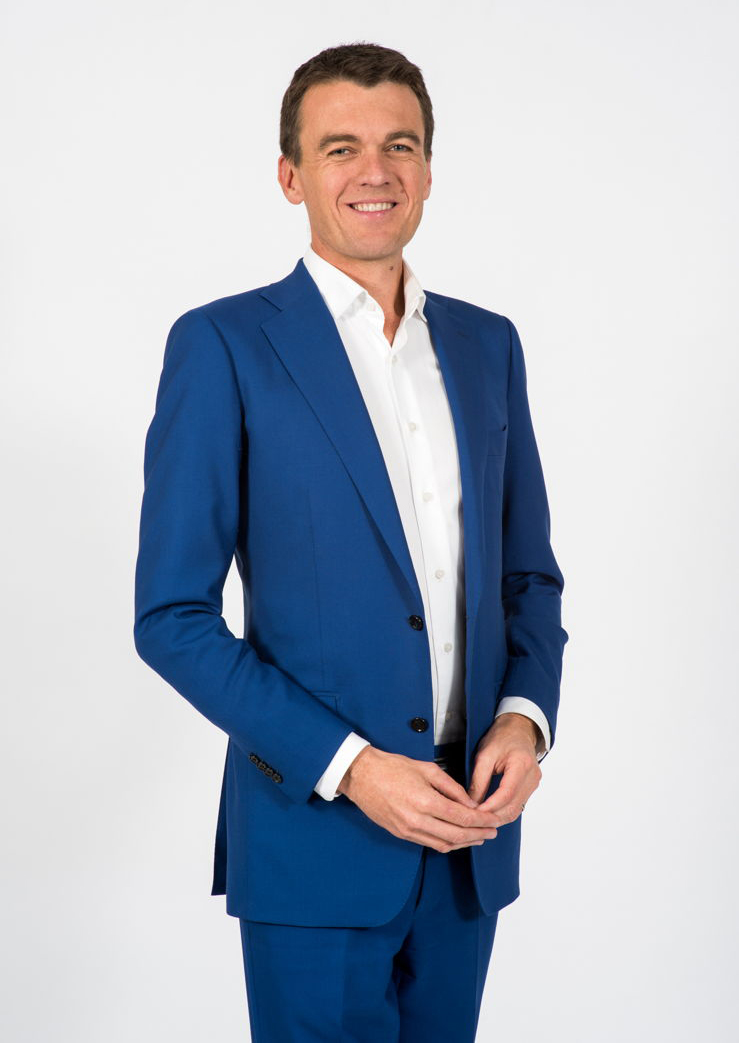 Co-host of News Breakfast on the ABC Michael Rowland recently hosted this event, the first in the ABC’s nearly 86-year history.

The meeting will now roll out annually, to become part of a desire to be not only held accountable, but also to allow transparency through opening up its systems, practices and practical day to day running of the organisation to the shareholders and the owners; the public.

Viewers were treated to a well put together array of imagery documenting the history to date, from being founded as a National Radio Service to becoming the Australian Broadcasting Commission with the advent of ABC Television starting 1956. It revealed Australia as it moved from the ‘White Australia’ policy and from tragedy to triumph after World War II, into being a ‘bloody good place to live’ for a culturally diverse population of people today. 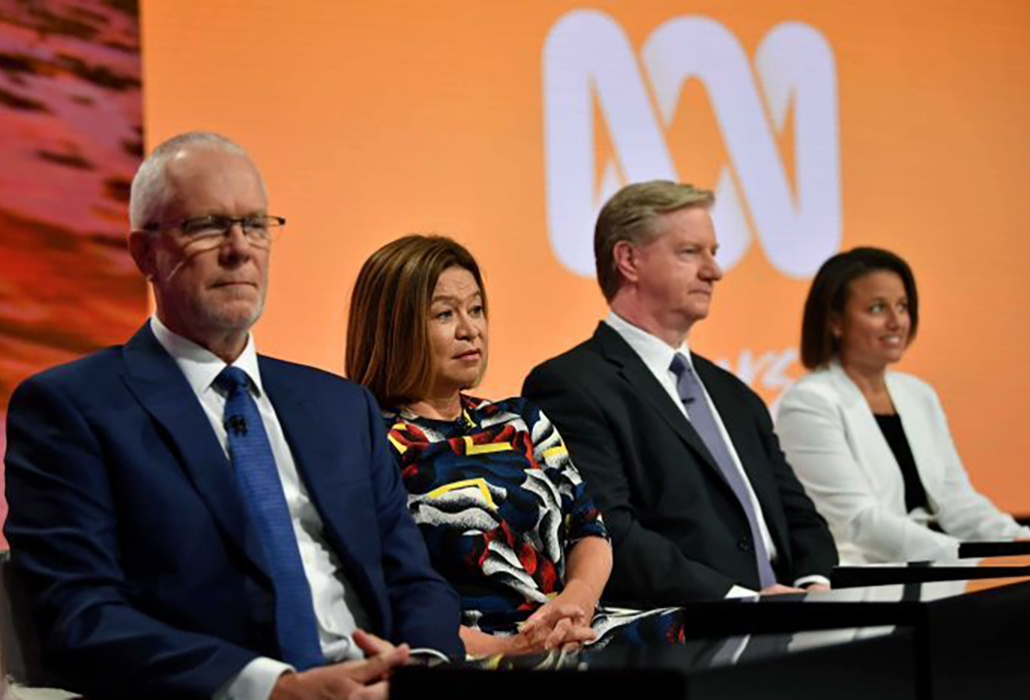 Members of the Board ABC at its 1st Public Meeting, February 9, 2018

Justin Milne Chairman introduced other members of the Board, who all gave a brief resume to viewers about the work they are involved with. He also delivered analytics about the ABC and how it is well trusted by some 85% of Australians, an indispensable organisation that reaches out to Australians wherever they are.

There are some 4 Billion people online every day he said, and over 8 Billion videos are exchanged on Facebook. He said that Apple sells a new iPhone every six seconds and noting to much mirth, there are more phones than toilets in the world. The internet and phones have changed the media forever and importantly, the trends are not going to stop, no matter what people’s personal feelings or fear of change maybe.

We learned how Mr Milne believes it is the time to fully evolve the ABC by investing in audiences, and their new initiative ABC 2.0 will use technology to change how the broadcaster delivers its service content to audiences. 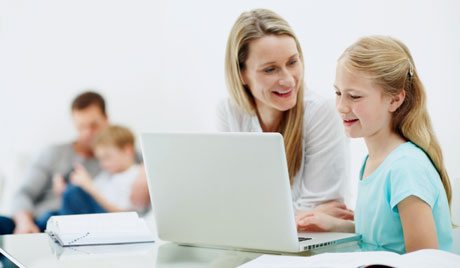 They plan to build new digital platforms to service a variety of means for their viewers to access content. The ABC library of sounds and images will also now become available to editors across Australia, free.

The ABC further plan to continue to expand and improve relationships with local city and country communities, and declares it’s not a substitute they are planning, but an additive to present services, which will require significant investment.

He did make the point though, there are some programs that just pass their use by date and need to met morph to service the needs of today’s marketplace. 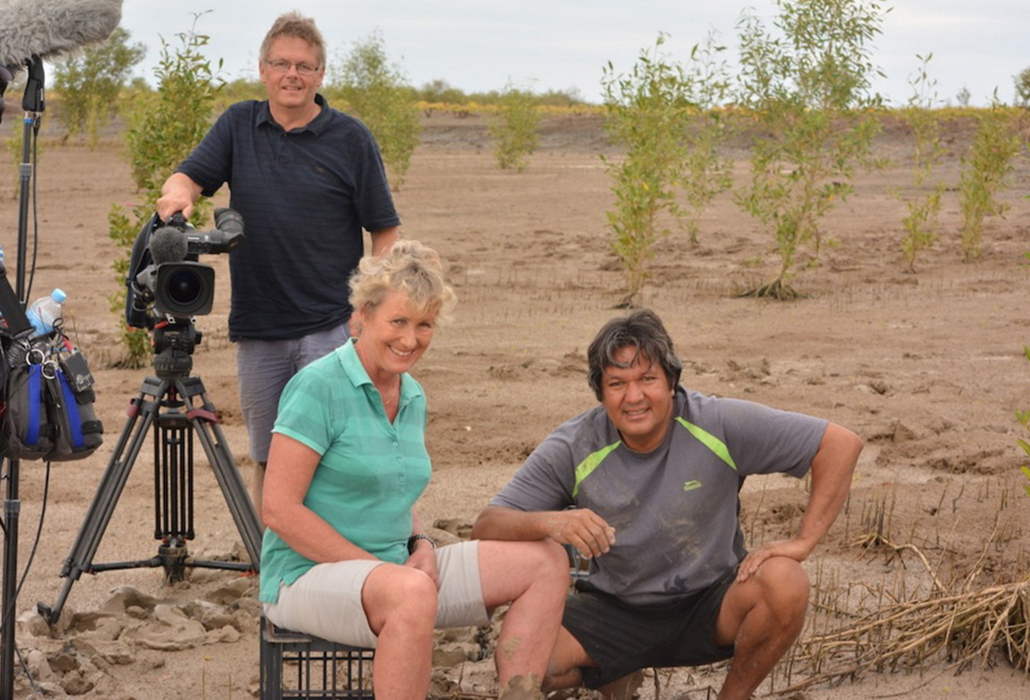 It was reported that the public has been the big winner, as the national broadcaster is viewed by its loyal audience as an independent trusted resource and Mr Milne wants to ensure it is just as precious and as fundamental to all Australians in twenty years.

Your stories are Yours Australia is a new catch cry with shows like Heather Ewart’s hugely successful and brilliant series Back Roads, where she tours the outback visiting isolated, remote and often unheard of places, the ever popular Pip Courtney’s splendid Landline series, as well as Costa Georgiadis and his ‘green’ team on Gardening Australia. 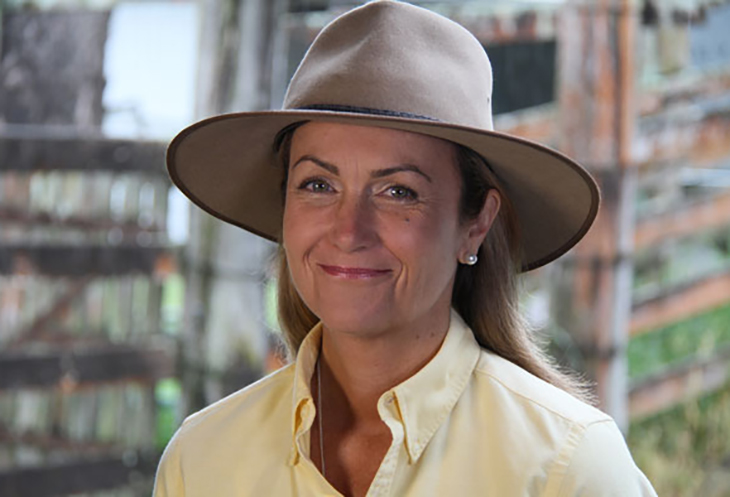 Pip Courtney chimed in from her home town in Launceston… pronounced Loncestan, in Tasmania, where she let us know the Mountain Back Riding trails are the best in the world, She said there is also plenty of the much-admired Tasmanian Sparkling for visitors to the north, where the community is kept busy kicking goals.

She told us a lovely story about the John Fenton property called Lanark in Victoria and she visited the remarkable property near Hamilton in Western Victoria over a decade ago (2006) and has since become the biggest fan of its owner’s approach to land management. 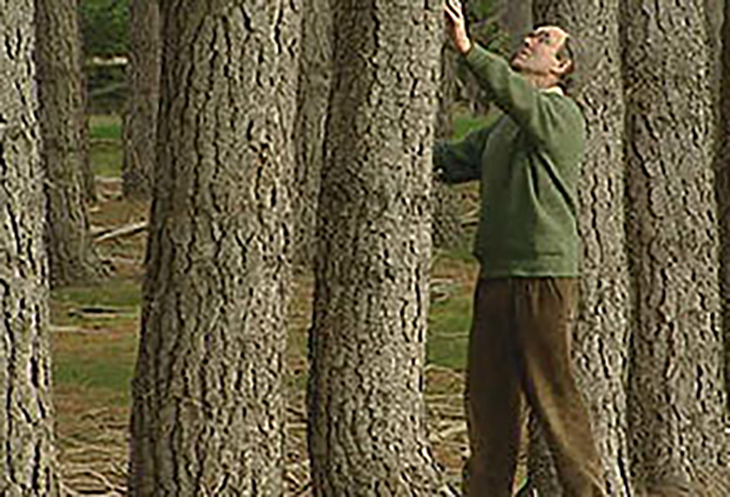 She related how she learned Mr Fenton had pioneered an innovative approach to ecological farming, when he had first taken Lanark over in 1956. It was dry, windswept, overstocked and barren and so he began a new policy of planting trees so that his wife would hear birds, a promise he had made her father when asking for her hand in marriage.

He explained how the ‘invaders hated trees’, meaning our ‘white’ ancestors in the years since the arrival of the First Fleet. 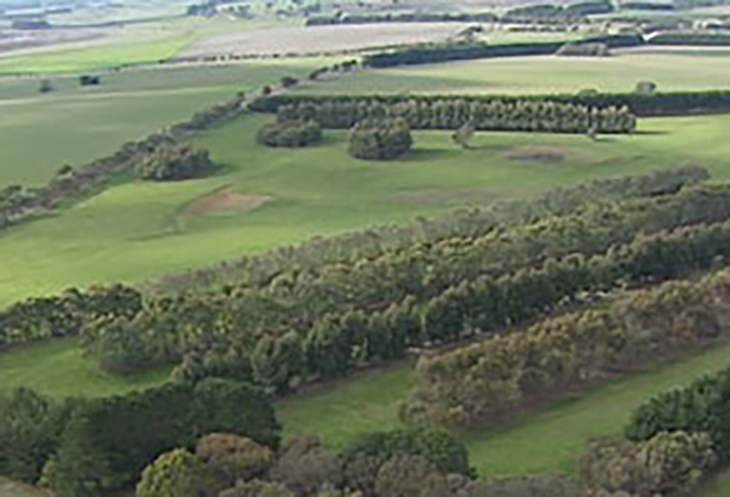 But that was then and this is now and John Fenton has now proved that today it is just the opposite. A report written by Fenton states in … ‘… 1997 when the ABC’s Landline program went to Victoria’s Western District and flew a helicopter over the property aerial footage showed a thriving, tree-studded property rich with pasture and teeming with birdlife…’

… Its 700 hectares even included a large lake, wetlands and a wildlife reserve. The contrast between Lanark’s green fields and the neighbouring properties’ barren and parched paddocks was stunning visual proof of the success of Fenton’s approach.

Must admit Landline is one of my fav regular shows, one for everyone in Australia to watch…it so helps to bridge the divide… revealing the people who produce what city folk consume. 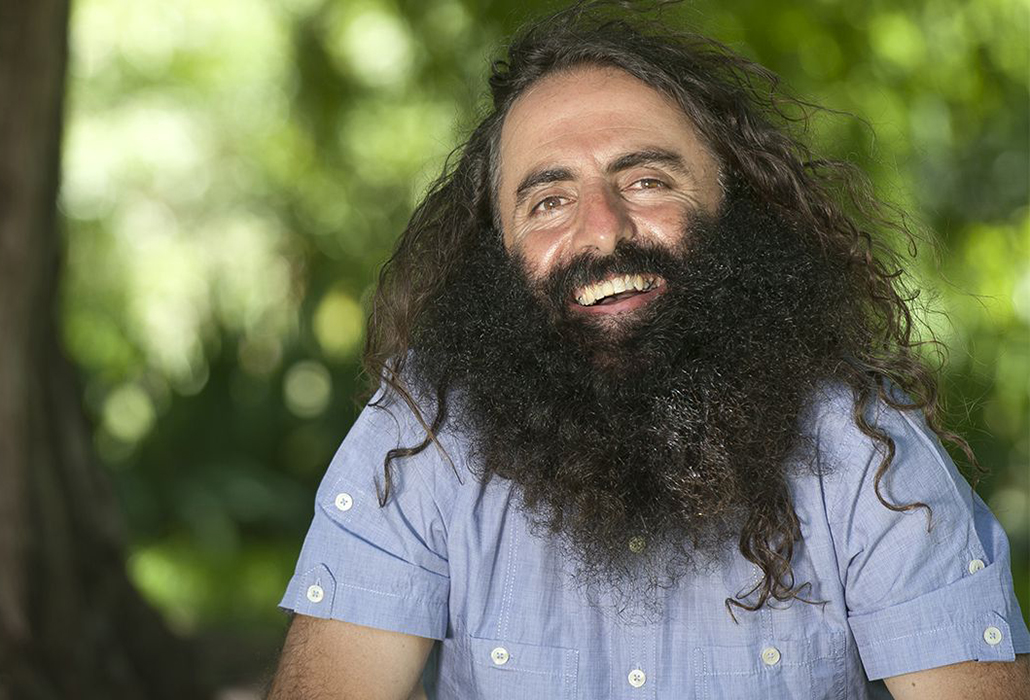 Costa Georgiadis from Gardening Australia was in Rockhampton, on the Capricornia Coast. An environmental educator constantly aware of waste he wants to up the ante in the ‘war on waste’ the ABC started last year.

He said it is about how the little things can change people’s ongoing behaviour. Gardening Australia in its 29th year

Michelle Guthrie the recently appointed Managing Director of the ABC has a clear objective – meaningful and relevant. She wants to invest in programs that are factually informative, entertaining and educational looking at new ways of telling stories, although committed to our core programs, high quality, distinctive and increasingly Australian.

The ABC has a passionate and loyal audience and the ongoing challenge is getting the ‘balance’ of programming right to meet audience expectations while investing in diversity and democracy through investigative journalism. 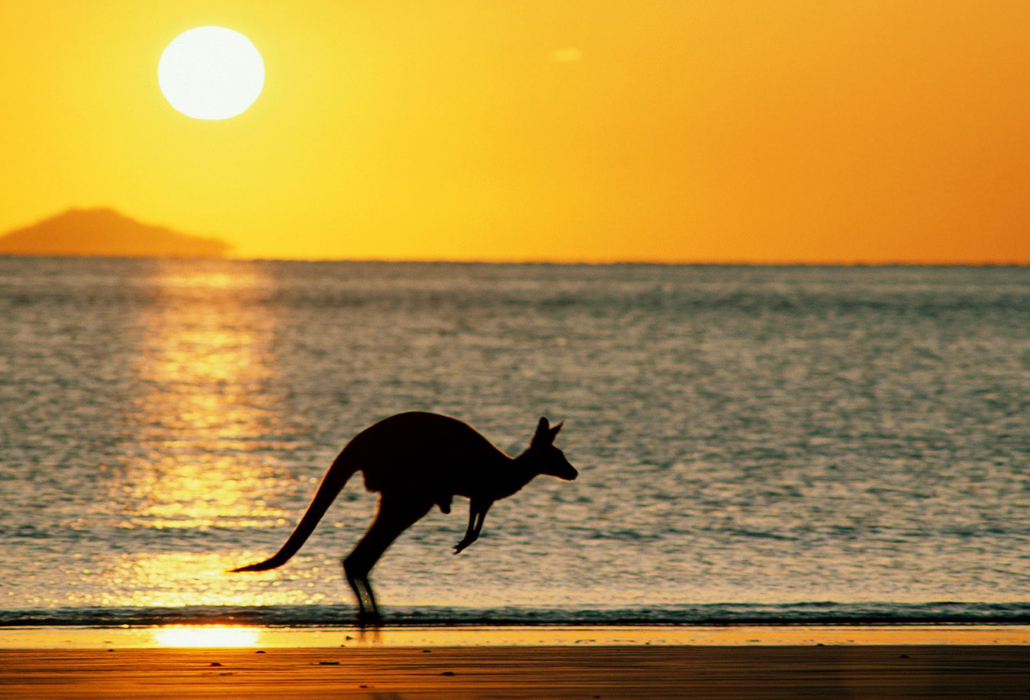 She also wants to champion children stories meant to inspire, entertain, educate and aid mind development. Arts, Science, ethics, religion education, ‘…we will become an even greater resource is the pledge with the aim of binding the nation together’ she noted.

She reported that this year the ABC will be the exclusive broadcaster of the Invictus Games and noted that they ‘… are more popular than the political parties combined’. More laughter.

Independence and commitment to in depth analysis the ABC want to be digital leaders, trusted and known for quality and services. 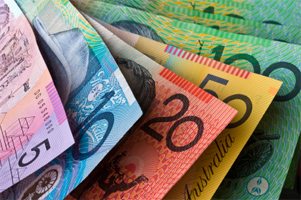 Louise Higgins… ABC Chief Financial Officer talked about how they are being transparent and accountable and that while the billion dollars in public funding is received, in actual fact their funding has declined 50% in comparison to other national broadcasters around the world.

They manage she informed us, because the ABC has learned to be fiscally more responsible… and funding 50 quality programs including 24 drama series demonstrates they have shifted money from admin into content… She also promised that despite declining funding… the staff and presenters are committed to never compromising on their charter obligations.

Trusted valued distinctive… all these themes contribute to our national identity and reflect the cultural diversity of our country and cities.

The ABC cannot rest on their laurels some 12.3 million watch TV… each week and they are kept busy updating regularly plans and performance, while cutting through the spin, because facts…are important and they want it to be a place to talk about Big Ideas – important to our democratic freedoms. 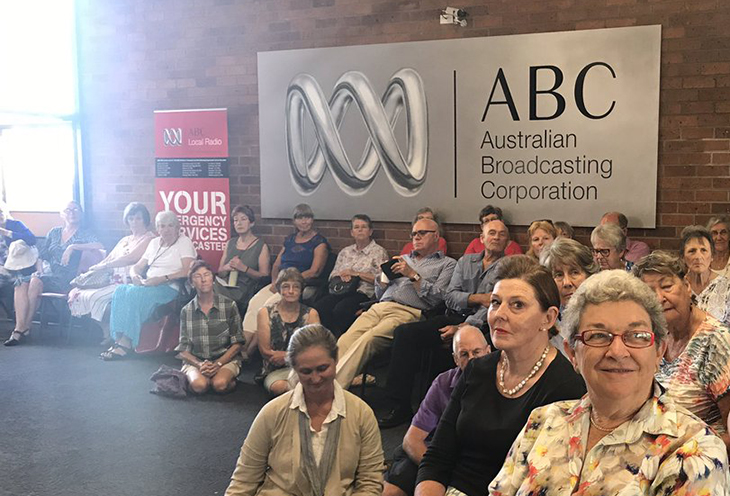 Question time ensued and the 350 Questions received had been grouped into themes – by an independent company and the answers available online with ten singled out for discussion. They confirmed to one viewer questioning the lack of good BBC shows shown today, that while International acquisitions are important, they are now investing more heavily in Australian content.

It is my hope the ABC continue to get the balance right. We need to continue to learn to appreciate why difference is important in growing and confirming our cultural diversity and identity.

As a nation it’s been our exposure first hand to the international environment, with Australians travelling the world in droves during the last fifty years, that has helped expand our national viewpoint and has helped keep us from becoming ‘inward looking’.

No one said what I perceive is the obvious, perhaps it is also because BBC programs are now being bought and broadcast on some of the world’s most influential streaming services. Mr Milne confirmed whether it was Science, Arts, Politics, Philosophy and Religion… we’re interested in – it’s the thinking side of our world, which is also fundamental to what we do.

From the days of typewriters to the technologically driven world of today, Alan Dunderland, the Editorial Director confirmed the ABC have always had a clear set of editorial standards.

Independence, Integrity, impartiality and diversity of perspective and it is important that all their executive and staffers listen, engage and learn. He also confirmed they are growing they’re Rural reporting.

As they summed up the one and half hour broadcast, which I watched on line, the Chairman of the ABC Mr Milne once again confirmed the trust placed in it by the public is not-negotiable. He reminded the audience all their staff are driven by telling the truth because they ‘want to own and maintain public trust’. The ABC plans and needs to remain strong, recognisable and uniquely Australian and to that end, their new programming and branding ABC Yours has begun – the idea being it was, will and always will be, yours now and into the future.

It is a truth universally acknowledged that a single man in possession of a good fortune must be in want of a wife. Unless, of course, he’s gay or already has a girlfriend. And what if he is neck deep in twice weekly psychoanalysis and entirely unfit for public interaction….