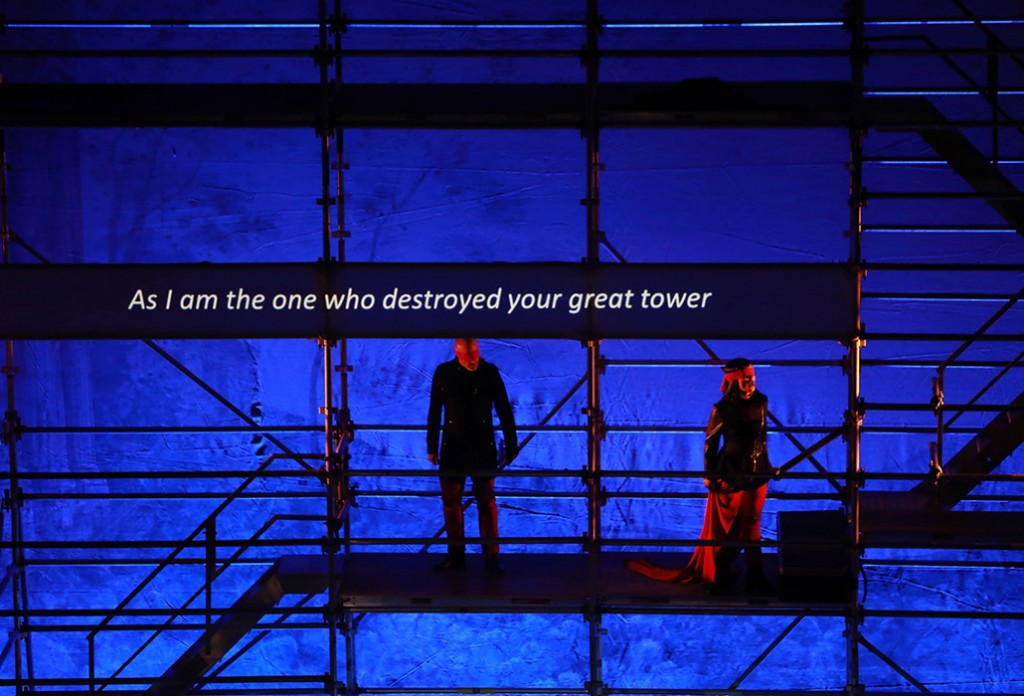 Bittersweet Obsessions followed a musical narrative that included addictive behaviour some mirth and much grief and tragedy, describing one woman and her journey through the bitter and sweet aspects of life. 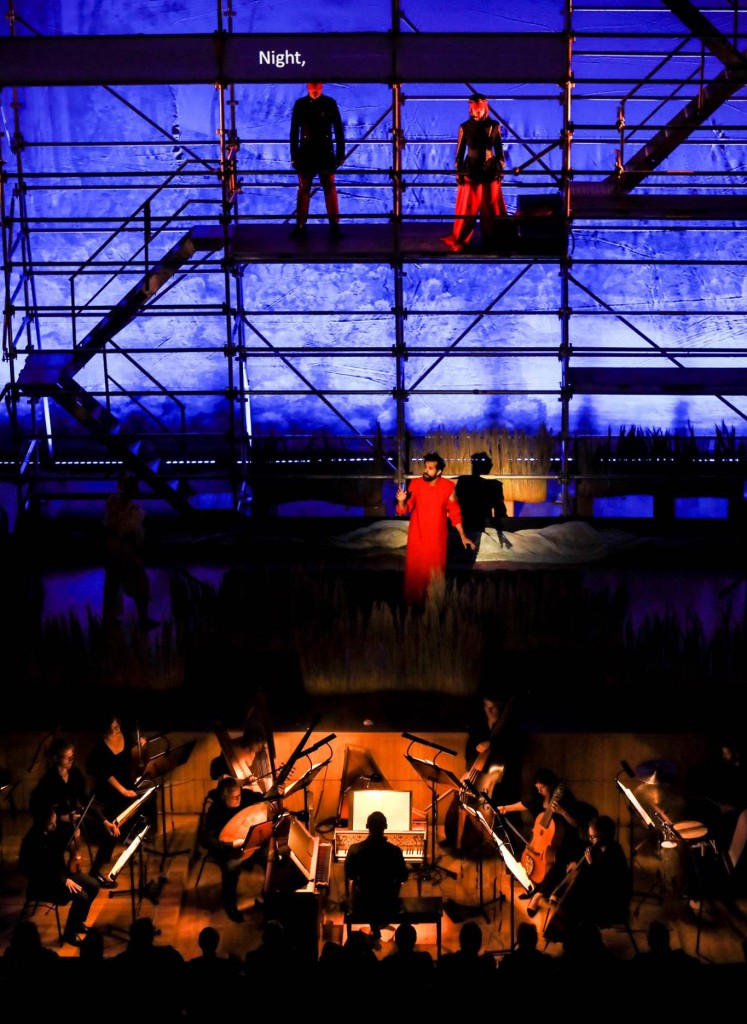 The ABO was in orchestra pit mode; the Elizabeth Murdoch Recital Hall having removed a number of the front rows of seats to provide a space for them to be in front of the stage, rather than on it.

The concert was an experience of marvellous music, the majority composed by two giants of music making during the seventeenth and eighteenth centuries, Italian late Renaissance innovator of both sacred and secular music string player and choirmaster Claudio Monteverdi (1567 – 1643) and German composer and musician of the Baroque period, Johann Sebastian Bach (1685 – 1750)

Pursuing his ideals as one of the ‘greatest and boldest masters’ of the lyric poem known as the madrigal, Monteverdi elevated melody as being at the very heart of music as he approached the human soul through sympathy. 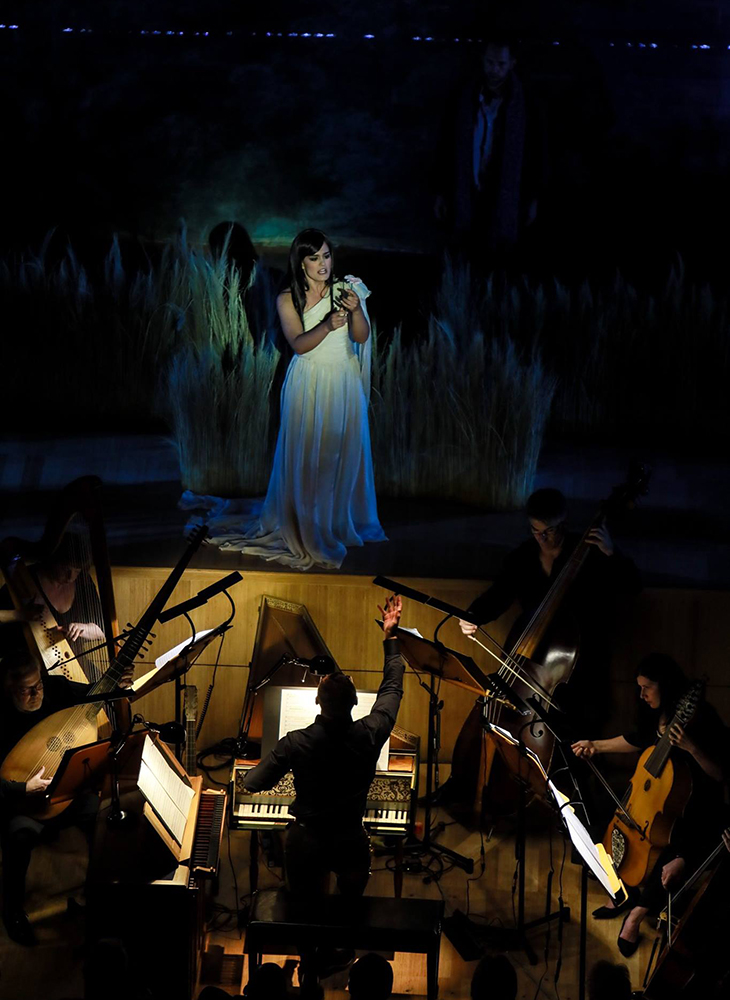 Divided into Scene 1 Lament, Scene 2 Tragedy and Scene 3 Comedy, the evening started with the splendid Toccata arpeggiata of German-Italian composer Giovanni Girolamo Kapsberger (1580 – 1651) featuring the plucked string instrument of the lute family the theorbo, played brilliantly by Tommie Andersson. After this prelude, onto the stage in a flowing white dress hinting at purity and perfection glided NZ Soprano Natasha Wilson.

Bathed in a spotlight and with raw wounded emotion, she sang Monteverdi’s Lament of the Nymph (Lamento della ninfa) about a traitorous lover, superbly.

On stage, there were long heather like grasses for her to stride through and four stories high scaffolding, certainly challenging for the main protagonists to climb blindfolded.

It was set against a giant painted cloth scene backdrop of a view known as Ascanius Shooting the Stag of Sylvia by French painter Claude Gelée known as Lorrain (1600-1682) who became renowned for presenting both nature and antiquity as more beautiful than it was. 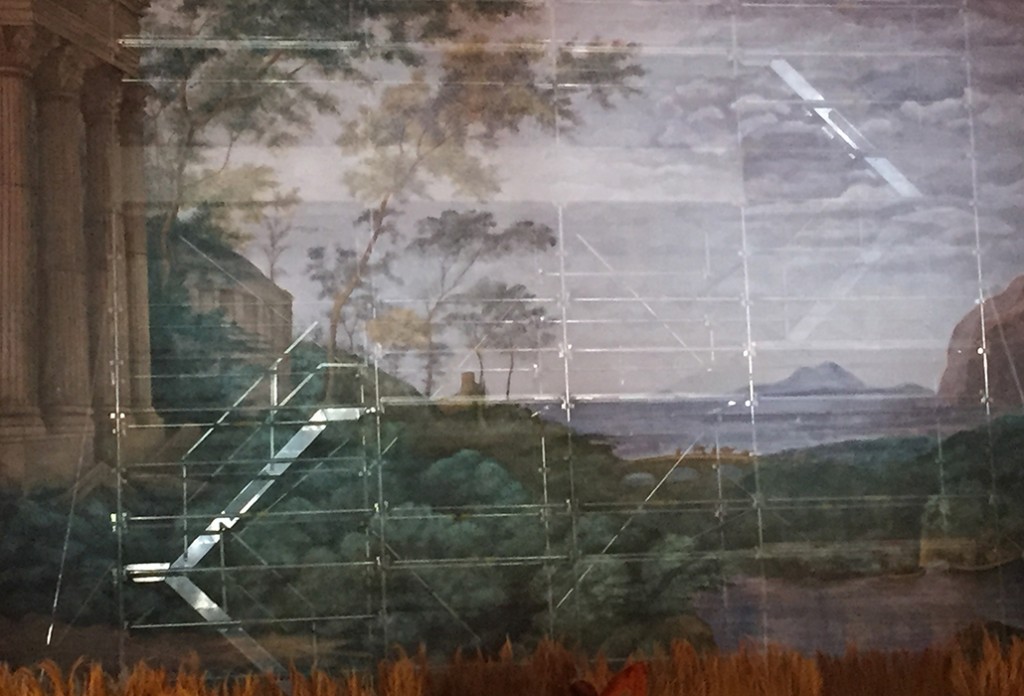 His pictorial countryside scenes around Rome inspired artists for centuries with his poetic rendering of light, which he manipulated to achieve subtle atmospheric perspectives.

The lighting design for this scene echoed that sentiment but seemed far too subtle for me. My companion and I found it difficult from where we were sitting to see the faces of the trio of US tenor Karim Sulayman, Danish baritone Jakob Bloch Jespersen, and Australian tenor Spencer Darby, who supported Natasha Wilson so well.

They’re fabulous voices emerged powerfully from the seeming gloom and while it may be old fashioned, I have to say I like to see the faces of people singing, the expressions adding so much more to audience enjoyment. 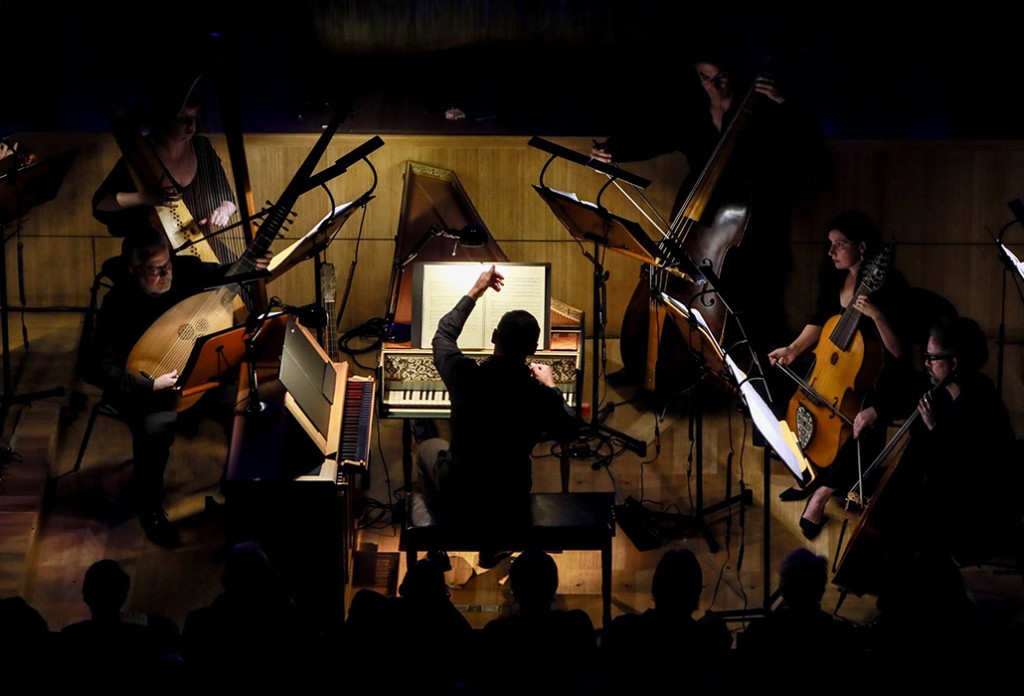 Scene 2 started by focusing on the orchestra with a simply awesome Ciaccona (Chaconne) composed by Italian lutenist Andrea Falconieri (1586-1656). This is my kind of joyous early music based on a dance theme and superbly performed by the splendid team of solo players assembled for this concert; consummate musicians all.

There was a number of highlights, including the playing by the fabulous percussionist, whose ‘wind machine’ was a big hit and whose castanet playing was superbly on rhythm. 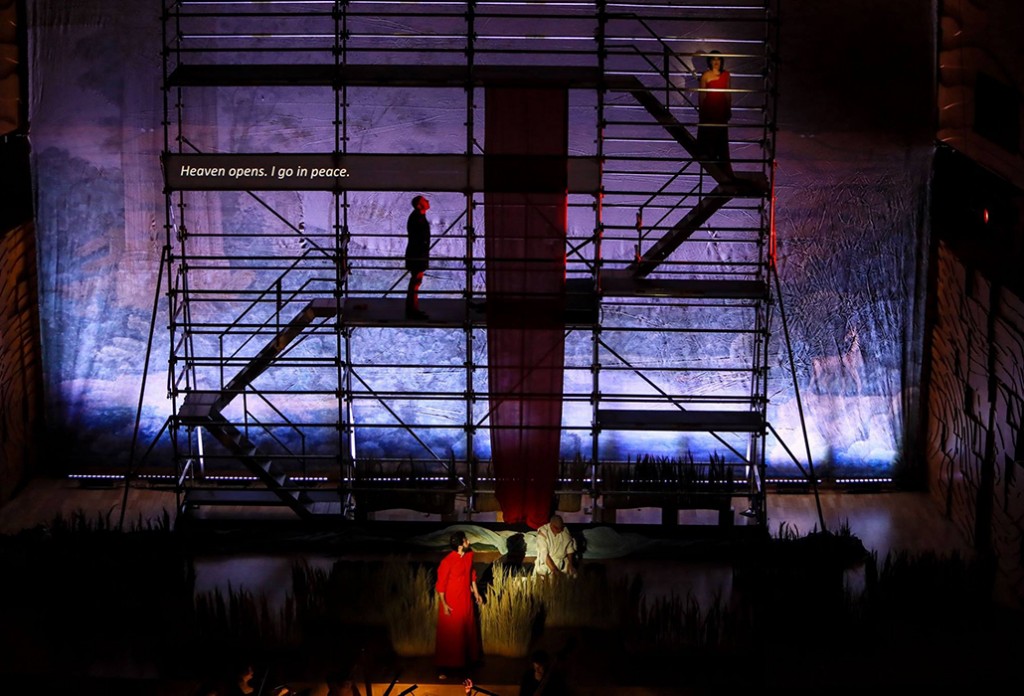 Monteverdi’s overture to an opera about the return of Ulysses to his homeland (Il ritorno d’Ulisse in patria) followed. First performed in Venice after it was composed in 1641, this work marked a turning point in musical history when the first public opera house, which had opened in 1637, now made such works accessible to a general audience for the first time.

This would have huge consequences for the evolution of both music and the opera libretto. In his dramatic cantata, The Combat of Tancredi and Clorinda (1624) (Il combattimento di Tancredi e Clorinda), a story of mistaken identity, there is a fight scene between Tancredi and Clorinda set against a backdrop of the First Crusade. 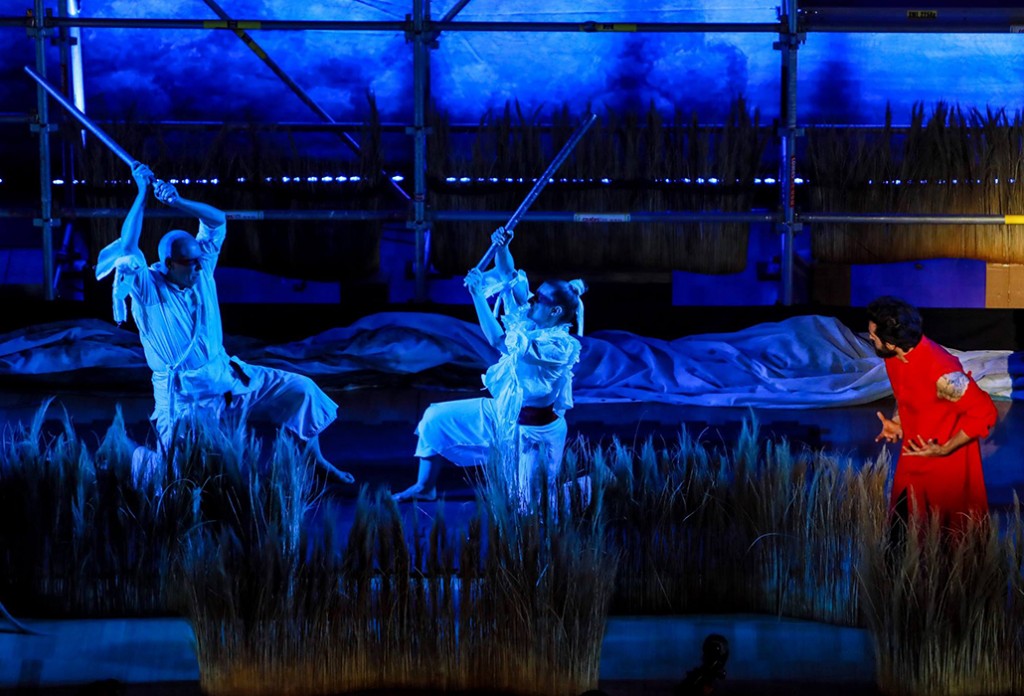 Monteverdi displayed a frank acceptance of realism, imitating the sounds of nature in various ways. The rapid reiteration of single notes in strict rhythms and use of pizzicato – plucking strings to express the clashing of swords, was aided by the arrival on set of Melanie Lindenthal and Andrew Sunter talented Aikido performers.

They showcased the modern Japanese martial art by actually fighting the lover’s battle for them, with much clashing of metal swords as the protagonists stood motionless high up on the scaffolding. 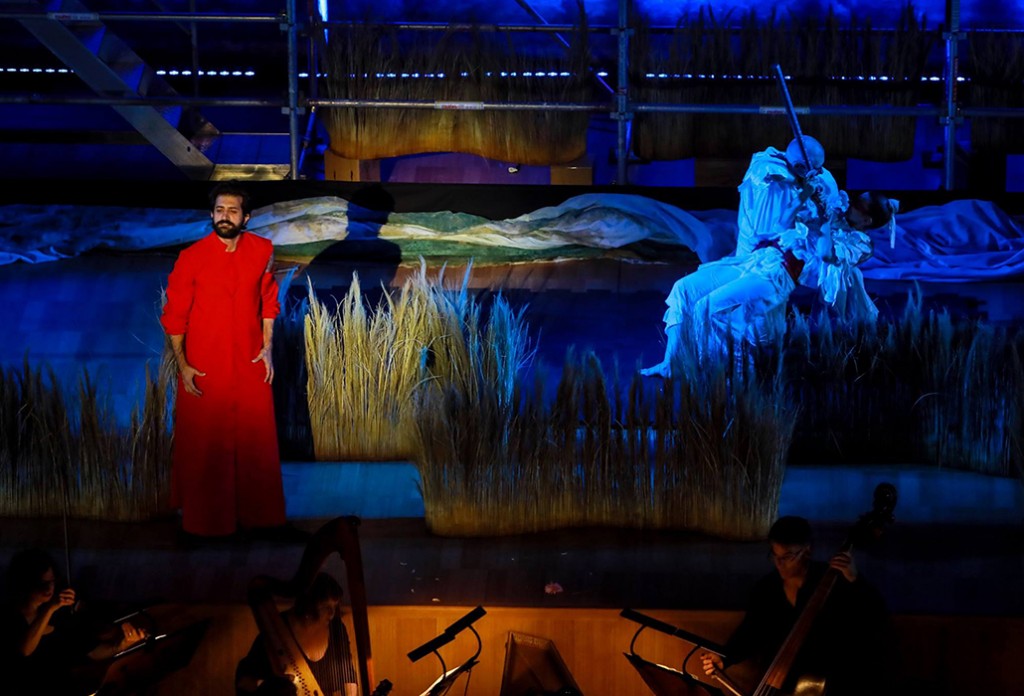 A work by Italian composer and organist Giovanni Maria Trabaci (ca.1575 – 1647), an extravagant harmony of sounds (Consonanze stravaganti) ended the scene and interval arrived with a dramatic flourish as the Claudian backdrop sudden fell, reflecting an idyll shattered as Clorinda declares “Farewell, I die in peace”; tragedy fulfilled. 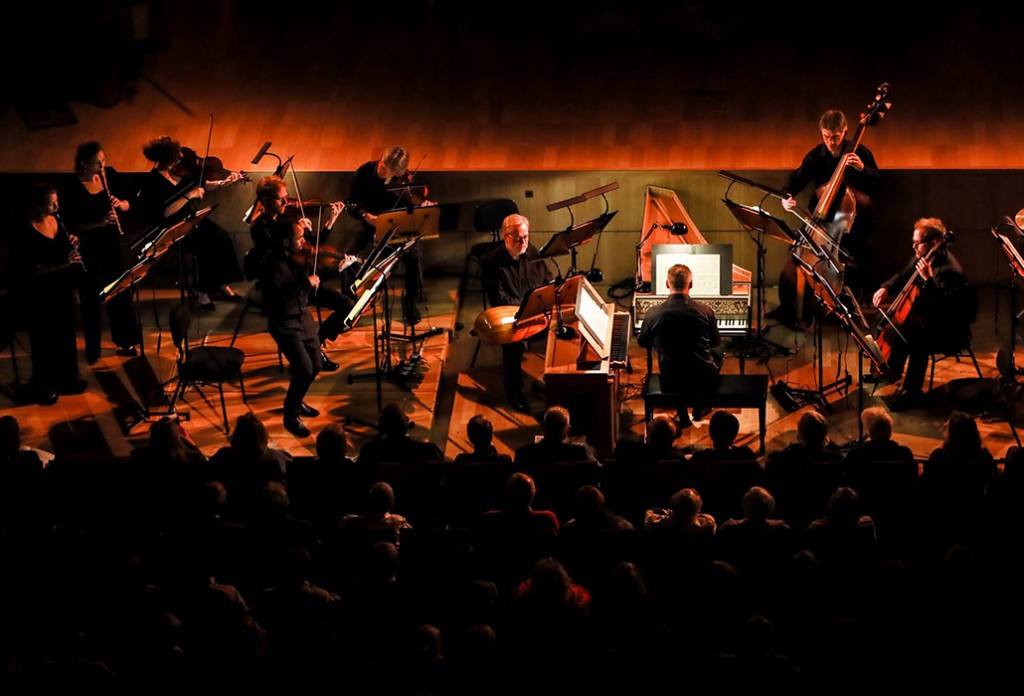 Following intermission, the ABO presented Scene 3; two works by J.S Bach, a distinguished member of a family of north German musicians who transformed the style, form and tradition of the past in his own age, enriching all.

They started with the inspiring first movement of the Brandenburg Concerto No. 4, BWV 1049, which concentrated on the selected solo musicians forming a small orchestra of sublime excellence in their contrived pit. 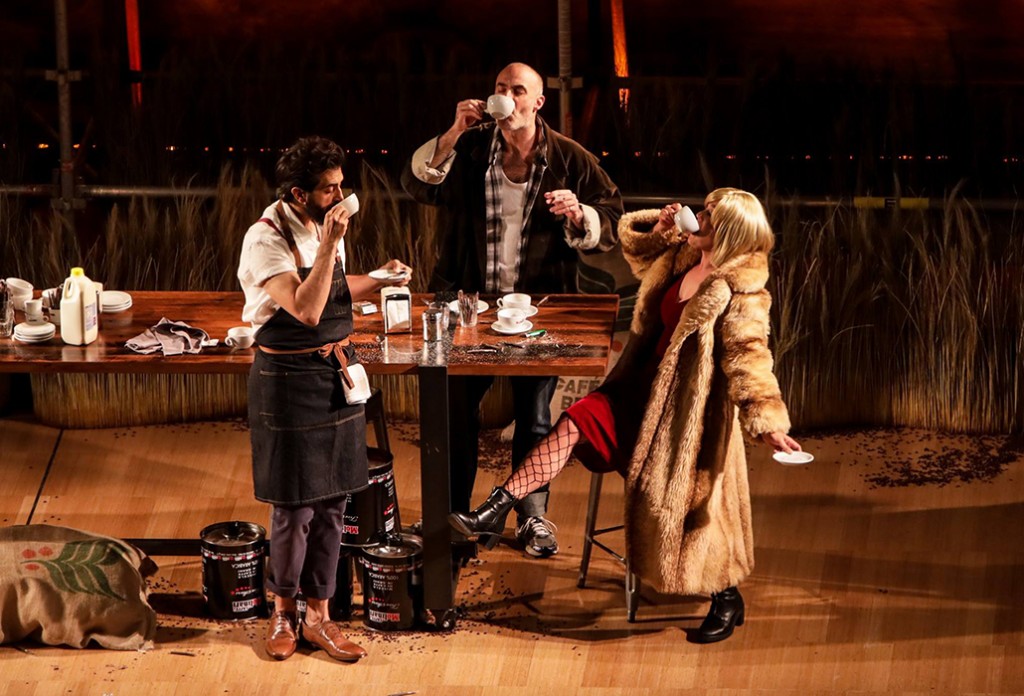 The final scene would be performed on stage by the now full-length fur clad blonde wig adorned glamour girl Natasha Wilson, who was busy taking selfies to prove her addiction to the beverage in Bach’s famous Coffee Cantata, BWV 211. This mini music drama suited to chamber performance had two main characters; a coffee-addicted girl (Wilson) and her cranky father (Jespersen).

It’s nothing short of amazing really, that our own modern society hundreds of years later echoes Bach’s own, with so many people not able to start their day or get through it without that richly brewed drink prepared from the seeds of berries from the Coffea plant. 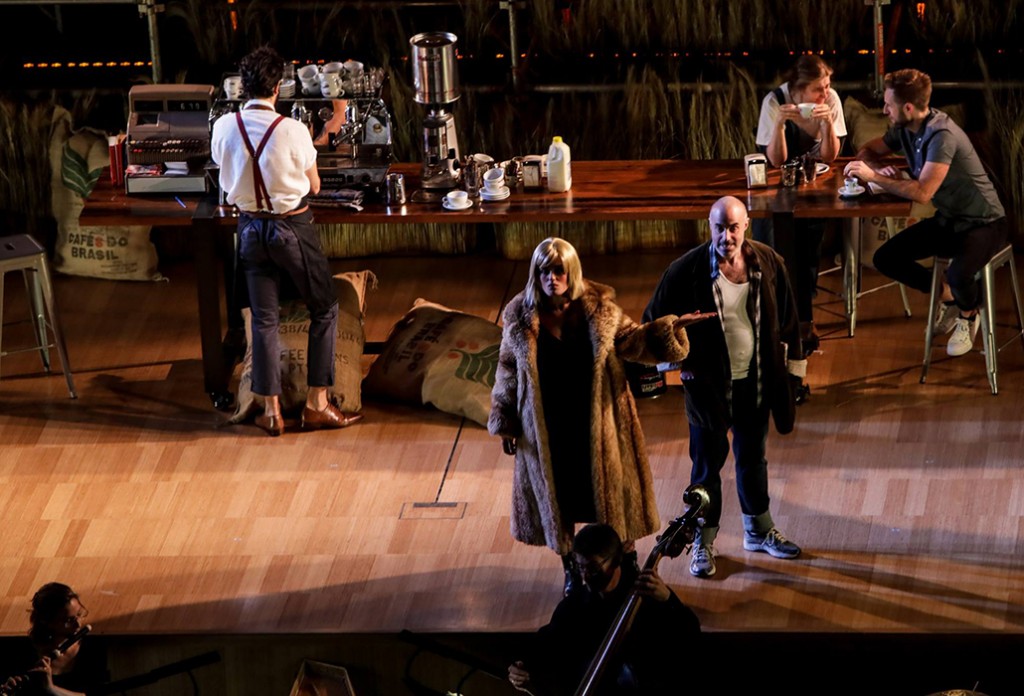 Dramaturgically speaking, Bach’s “Coffee Cantata,” is similar to a “comic intermezzo”, a popular genre of early comic chamber opera that usually only required two singers and a few instrumentalists.

The characters were often an attractive, witty woman and an older, less-intelligent man, based upon archetypes from the contemporary Italian phenomenon of the day the commedia dell’Arte, whose characters were highly stylized, the plots frequently revolving around disguises, mistaken identities and misunderstandings.

The narrator, tenor Kareim Sulayman, sings recitative at the very beginning and very end of the work. So, what is he doing the rest of the time? Well he’s the barista making all the coffee for the heroine to drink. 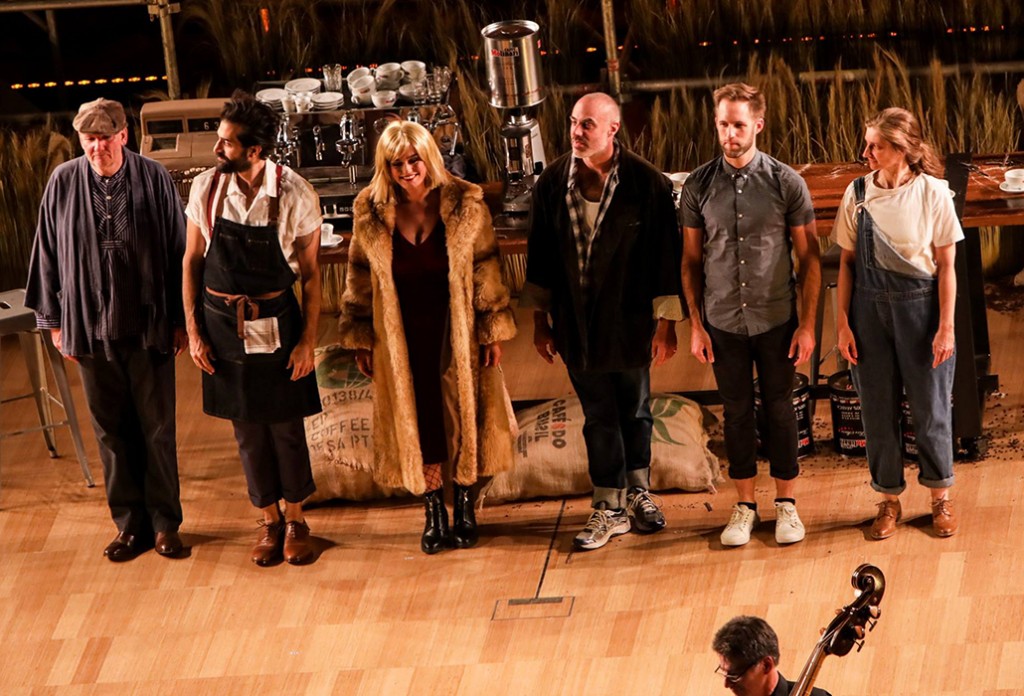 Historically these mini music dramas wowed audiences with their ‘wild gesticulation, acrobatic pratfalls, exhibitionism, and non-verbal communication of the most elemental sort’.

Ours certainly responded to the ABO staging at the end showing their appreciation by resounding applause for the ‘rollicking satire about the coffee-drinking antics of a lusciously-jolly, caffeine-crazed woman’. 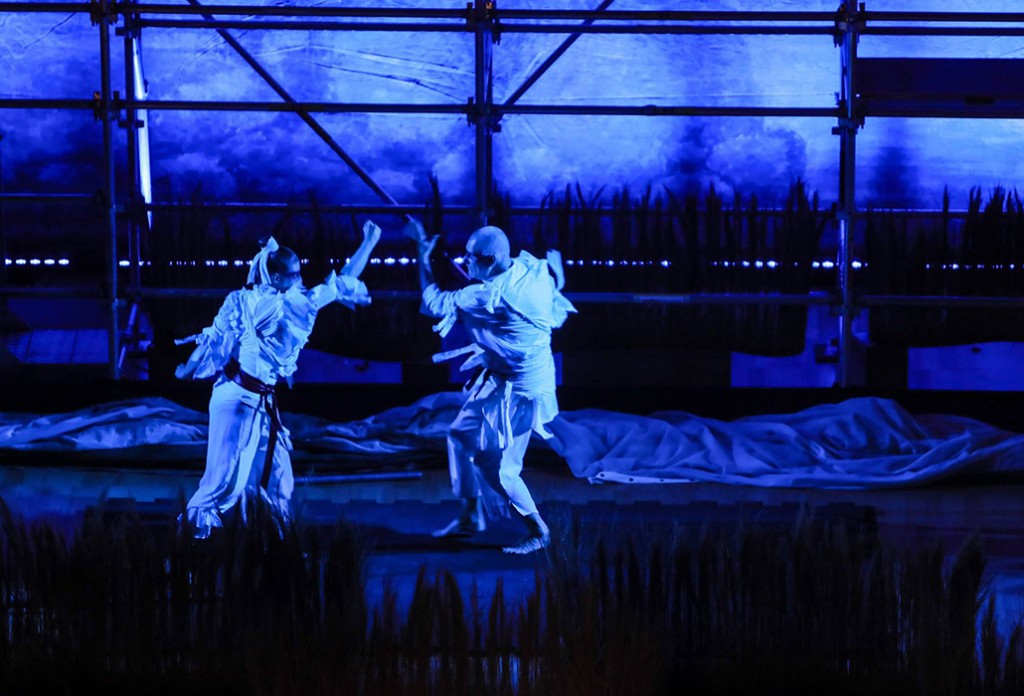 The Georgian era in England began on horseback and ended in a railway carriage. As to the countryside, where the vast majority of England’s nearly six million people lived, it was mainly vast fields, sprawling common waste, wonderful woodland with bogs and moors being very treacherous places. Much of the…