The fundamental difference between society today and that of ancient times was that practically everyone had a direct link to agricultural production.

Compared to modern times, commerce and industry played only a modest role and the overwhelming importance of agriculture in ancient societies cannot be stressed enough, because it affected every aspect of life.

As fertility is synonymous with survival it doesn’t take much imagination to endeavour to understand why allusions to the act of procreation are highly visible.

Add to this the fragility of human life in a world without antibiotics or sophisticated surgical techniques; one in which an infected wound, the drinking of contaminated water or a miscarriage meant certain death, we can begin to understand a little more. 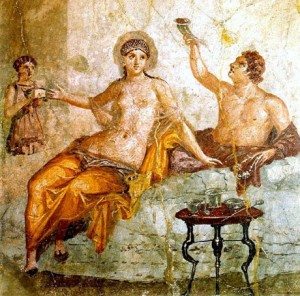 In such a society religion was not limited to visiting a church once a week or to doing good works. It was integral to daily life permeating every aspect of it daily, both in the fields and in the house.

This placed a constant awareness and emphasis on the presence of divine powers whose benevolence needed to be constantly sought through a multitude of prayers and ritual sacrifice. 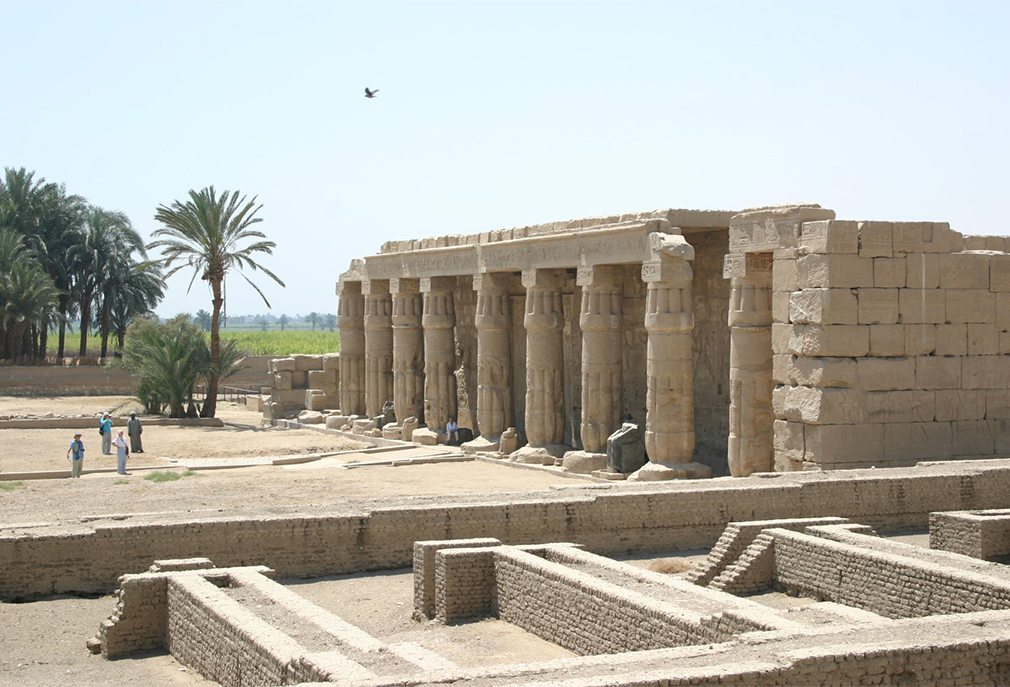 Abydos and the Osirion Temple

Two Professors, David O’Connor and Andrew Wallace-Hadrill have spent a great deal of time excavating and conserving the archaeological sites of Abydos in Egypt and Herculaneum in Italy, respectively.

Both sites continue to yield discoveries invaluable to classical historians and the world at large. Abydos is the burial place of the first of its Kings and numerous Pharoahs and also a cult center for the god of the dead, Osiris.

The Temple of Seti 1 at Abydos was an important spiritual site and every ancient Egyptian wished to make a pilgrimage their once in his lifetime, much like the ancient Greeks wanted to visit Olympia.

On the walls of the Temple of Seti 1 at Abydos was a record, or list of names of seventy-six sovereigns from the old and new kingdom. List of Royalty at Abydos in the Hall of Kings. It bears cartouches of all the rulers from the 1st dynasty up to and including the rule of Seti I in the XIX dynasty somewhere between 1294 and 1279 BCE

A few are missing because they were later erased from Egyptian history such as that of the female pharoah Hatshepsut.

Then there was the pharoah who only believed in one god, monotheist Akhenaten. His successor was the boy king Tutankhamen, whose treasure has ensured we will know and remember him. And then Ay, the enigmatic character who succeeded him.

This was when a new tradition was established where a separate tomb and enclosure were combined into a single complex. Abydos is one of the most enduring sites in southern Egypt. 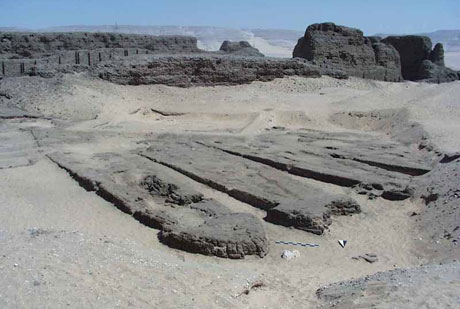 It was of immense importance to ancient Egyptians for thousands of years and has yielded up many fabulous artifacts now in museums around the world.

Eminent British archaeologist Sir Flinders Petrie arrived at Abydos in 1880. He excavated many of the most important archaeological sites in Egypt during the nineteenth century such as Naukratis, Tanis, Abydos and Amarna.

At Hawara from 1888 Petrie also found papyri of the 1st and 2nd centuries and, north of the pyramid a vast necropolis where he uncovered 146 portraits on coffins, all dating to the Roman period including a very attractive Roman lady he dubbed the ‘Jewellery’ girl’. David O’Connor went to excavate at Abydos in 1967. He was hopeful of expanding Petrie’s research. However it would be 20 years before he got a great result.

In 2000 at the turn of the new millennium he made a quite startling find, fourteen ancient boats buried in their own brick lined boatsheds (enclosures) next to the tomb of a still unknown king.

The world’s oldest surviving wooden boats had been expertly crafted and functional when buried.

Just like the servants who were buried with their pharoahs the boats were meant to provide their owner with essential services in the afterlife.

Today through the continual efforts of a dedicated band of archaeologists and their helpers Abydos continues to reveal its hidden treasures.

At Herculaneum Andrew Wallace-Hadrill together with his colleagues want to conserve Herculaneum so that work on this ancient site can continue as long as possible.

Herculaneum was discovered when building a well in the 16th century and excavated from 1738 onward. Works have been ongoing, albeit sometimes restricted, well up to modern times. Unlike its sister town of Pompeii, Herculaneum following the eruption on the 24th August 79AD of the volcano Vesuvius nearby to Naples was almost perfectly preserved, right down to the tiniest detail.

Mud engulfed the site and while harder than the ash that covered Pompeii to remove, it helped to preserve the remains in pristine condition.

Removing it without damaging the remains is a process that has been refined over the past 250+ years.

The thing the two sites have in common is boat sheds. It was long thought nearly all the inhabitants of Herculaneum had managed to escape.

In 1982, when the excavations reached the beach area of Herculaneum, archaeologists discovered the remains of hundreds of skeletons huddled together in 12 boat houses facing the sea. 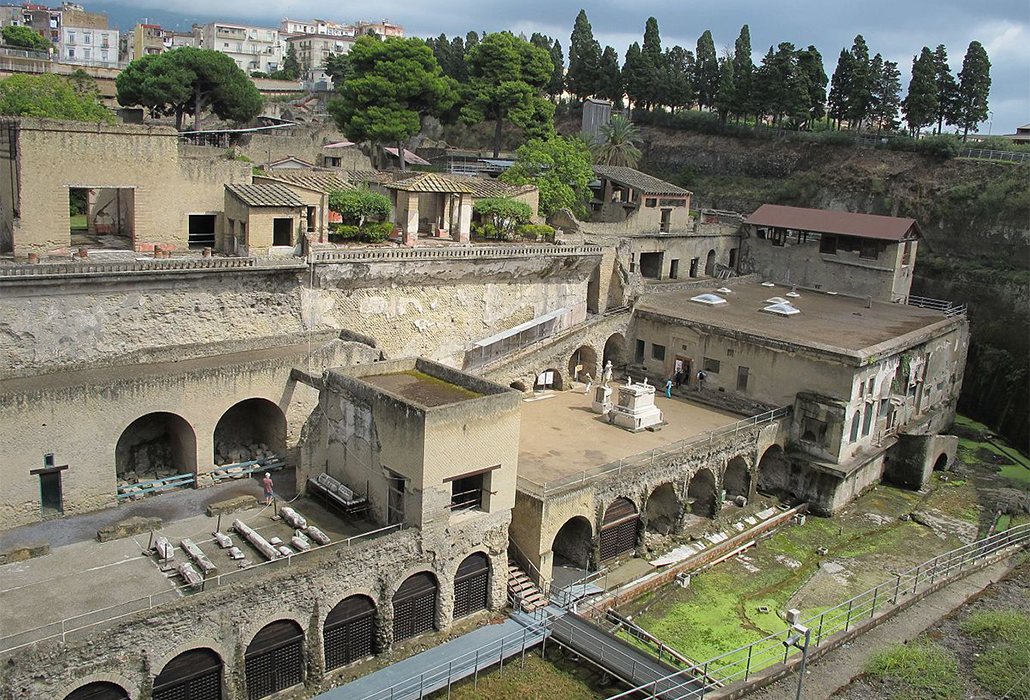 Andrew Wallace-Hadrill has excavated at both sites and for he and his colleagues today it is a race against destructive weather and flooding that is the main challenge.

You cannot get closer to the Roman world than in its excrement and Wallace-Hadrill excavated a cesspit at Pompeii to reveal that both rich and poor in ancient Rome both had a decent diet.

It included sea urchins to nuts and figs, eggs and chicken. He discovered all sorts of information, including the fact residents of both cities were taller than the average height of the people living at Naples today. The ancient city of Herculaneum lies underneath a modern-day suburb of Naples. The parts excavated are only about a third of the entire site. It has been difficult for Dr Wallace-Hadrill to expropriate the land to further excavate the enormous site of the Villa dei Papyri at Herculaneum on which the famous Getty Villa in California was modeled.

Excavation work at the Villa dei Papyri recommenced in 2007 after an eight-year gap, because they discovered two extra floors to the building.

It was funded by a £1.5 million grant from the Packard Humanities Institute, founded by a scion of Hewlett Packard computer empire and by a £2 million-a-year grant from the European Union and Region of Campania. However it is now in abeyance again, due to flooding. 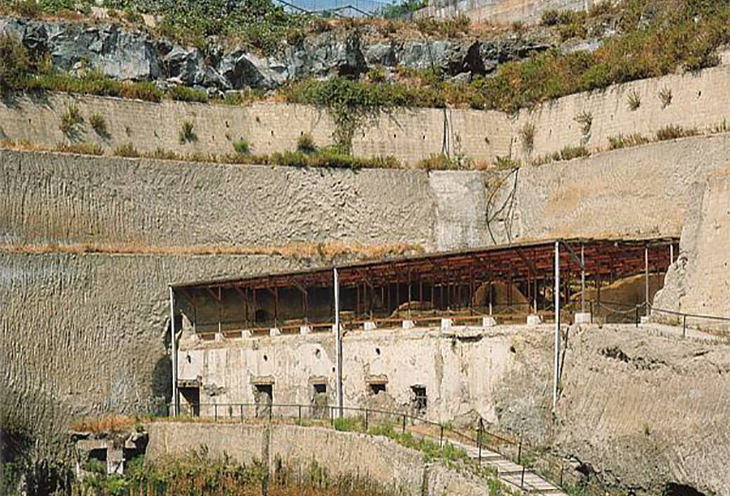 The Villa dei Papyri where charred scrolls containing the writings of philosopher Philodemus of Gadara and several other fellow Epicureans were recovered.

The difficulty today is that most of it lies underneath Naples modern town hall. Many of the cellars of Herculaneum’s modern houses are also only a metre or so above the Ancient Roman ruins.

Purchasing back people’s houses to reach more remains is not really an option. It was Greek colonists during the 8th century who first established trading stations throughout Campania, that part of Italy which is south of Rome.

The Romans called Campania Felix, the happy land because of its exceptional fertility, proverbial beauty and ideal climate. It eventually passed into the control of Italic tribesmen who moved down from the mountains of the interior and intermarried with the Greeks. All were quick to learn the lessons of civilisation and the union, to coin a phrase, was a fruitful one.

It resulted in a culture, which in varying proportions was both Greek and Italic, aesthetics + passion, a powerful combination.

The encounter between the Roman world and Greek Hellenistic art resulted in an enthusiastic appreciation of beauty as an end in itself. Roman aristocrats throughout the first century flocked to the countryside of Campania to escape the stresses and strains of urban life. At least until the year 79 and the eruption.

The excavation to date at Herculaneum has revealed not only treasures but also well-preserved buildings and a wealth of information about how Romans lived, worked and why they died.

When the tunnels were dug into the city during the 18th century they brought up all sorts of fabulous statues and frescoes from the walls. In 2010 the first complete painted statue ever found, the head of an Amazon warrior was unearthed near the also recently found Basilica. Excavated remains of a house at Herculaneum, the rest goes in under the hillside beneath the modern city

If Professor Wallace-Hadrill is successful and conservation and excavation continues hand in glove at Herculaneum they may yet find more important public records of life on papyri.

Abydos by David O’Connor and Herculaneum by Andrew Wallace-Hadrill have been released and are available. Their two beautifully illustrated, and authoritative books fill a significant gap in the literature on the ancient world.

Derek Parker reports on the relocation of the Mars Gallery (Melbourne Art Rooms) to Windsor, whose artists consulted on the creation of the light-filled space