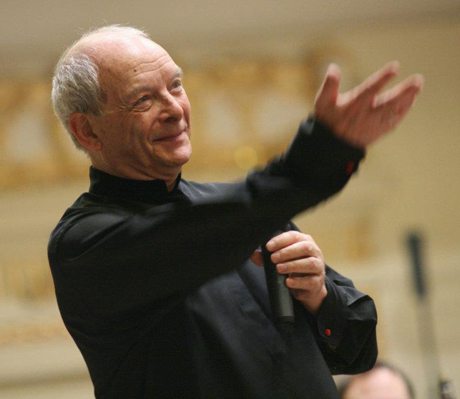 The Academy of Ancient Music, based at London, unknowingly encouraged my love of early music played on original instruments at a formative period in my life. When I was travelling to London during the 70’s and 80’s for every visit I would take tickets to one of their performances. They always presented powerful overwhelmingly poignant works that were entirely unpredictable – just like wonderful fireworks going off in both your head and heart.

At the time The Academy of Ancient Music was under the baton of founder, harpsichordist, writer, musicologist and music maker extraordinaire Christopher Hogwood (1941 -) who had established the ensemble in 1973. Christopher Hogwood kept everyone playing in time, and educated me about the joys of the Baroque, until 2006 when another musical giant in his field Richard Egarr was appointed to safeguard Hogwood’s legacy and to guide the ensemble into the future. They are performing with Australian soprano Sara MacLiver presenting a series of masterworks of Baroque music, in celebration of the fortieth anniversary of the group’s founding by Christopher Hogwood.

Sara MacLiver is considered one of the leading exponents of the Baroque repertoire in Australia and was Egarr’s first choice to perform with the acclaimed ensemble. A harpsichordist and organist, as well as playing the historical fortepiano and modern piano leader Richard Egarr was well qualified to follow Christopher Hogwood’s lead and has since established the Choir of the AAM.

Now he is reaffirming The Academy of Ancient Music‘s position as a powerhouse and champion of the Baroque, by bringing the orchestra on a tour of Australia.

Fans and followers of great composers of the Baroque era can bring their friends along to enjoy the unique sound and wonderful layering of musical textures the era is known for. They are rich, eloquent and always inspiring.

Great favourites include works by England’s musical geniuses Matthew Locke (1621-1677), composer in ordinary to the King before the era of Henry Purcell (1659 – 1695), who composed music for the church, the court, the stage as well as private entertainments.

Also included are works by German born genius, the London based Georg Frideric Handel (1685-1759) and his youthful contemporary Thomas Arne (1710-1778) the son of an upholsterer and self taught musician who eccentrically attended the opera in footman’s livery to gain free admission. The concert will feature Locke’s incidental music for Shakespeare’s The Tempest, which will function as a curtain raiser for a selection of songs and interludes from Purcell’s divine masterwork The Fairy Queen.

The works plucked from Handel’s enormous catalogue of theatre music, is a group of discerning selections from Rinaldo and Amadigi in Gaula, and from the oratorios, Saul, Samson and The Triumph of Time and Truth.

Contemporary composers of the second half of the seventeenth and eighteenth century in Europe were able to convert drama and religion into sounds of unparalleled intensity.

The artistic tradition in music at this time was born of an exciting free imagination and as such, achieved a complete medium of expression as well as the highest pinnacle of achievement in a climate that has seldom been granted to any other generation.

The very earnestness of the movement and preference toward ‘classicism’ brought about a ‘moral uplift’. The time of opera had arrived, with the music telling emotive stories about love and life.

The population at large consumed this new musical life passionately, elevating its artists so they achieved unity of both form and material. However all attempts to keep to ‘rules’ inexorably failed, leading to a romantic overflow that, in its intensity, brought about a complete re-assessment of early church Music.

His earliest surviving compositions date from 1680 his theatre music, in particular, made his name familiar to many who knew nothing of his church music or the songs he wrote for the court. Indeed one of the most important musical developments in Restoration London was the gradual establishment of regular public concert.

His only true opera (i.e. with music throughout) was Dido and Aeneas, written for a girls’ school at Chelsea is among the finest of all 17th-century operas. He provided a number of verse anthems and full anthems for the liturgy of the Church of England, as well as settings of the Morning and Evening Service, the Magnificat and Nunc dimittis, Te Deum and Jubilate.

Ye once ten hundred deities, which is a favourite comes from one of his semi-opera [spoken plays alternating with operatic scenes and interludes] The Indian Queen composed in 1695. J’adore Purcell, especially his wonderful music from The Fairy Queen, which is such a sensational masque, or semi-opera considered one of the most spectacular productions of the seventeenth century in England.

My first chance to hear the whole cycle of The Fairy Queen was years ago when the Song Company produced it in Sydney. Then the versatile soprano Sara MacLiver performed in The Fairy Queen for the very first production of the newly established Pinchgut Opera to great acclaim.

Handel was performing on the harpsichord and organ and began composing aged nine.

His works include some fifty operas, a large amount of church music, twenty-three oratorios and the much-loved instrumental works the Water and Fireworks Music. If a restaurant, café or coffee bar that you frequent is not supporting StreetSmart Australia please let them know about its DineSmart and CafeSmart initiatives