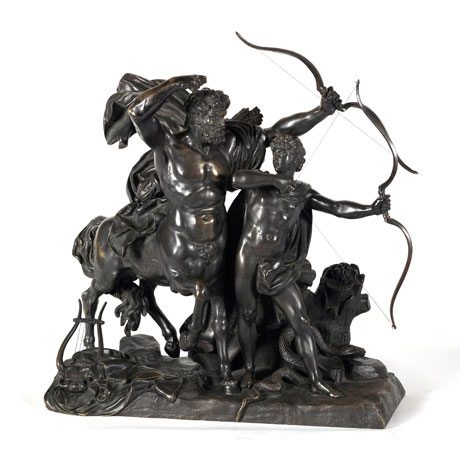 In the ancient world it was the almost uniform belief that the Trojan War was an historical event… but then, as now, everyone knew there was no primary source for the war; equally they knew that it had happened! * The discovery of a fine French figural group in bronze in a Sydney antique store, depicting a young Achilles being educated by the centaur Chiron, had me pondering humankind’s capacity for learning, adapting and improving.

It becomes evident when you view this delightful work, a bronze dating from 1860 and made at Paris, the acknowledged centre of artists and sculptors by the middle of the nineteenth century. It was left unsigned, so we cannot ever really know who made it, except through attribution.

This work of art was conceived during an age when men set out to rediscover the virtues of the classical ideal in art and architecture, based on wide ranging archaeological and academic research. 47.5 cm high and 49.5 mm wide and beautifully modeled after a painting by Jean Baptiste Regnault (1754-1829) in the Louvre Museum at Paris, it is quite my thing really, because since as far back as I can remember I have always preferred sculpture to painting.

Producing an image human or hero in stone, marble or bronze has to me always seemed quite miraculous. One of my favourite of all legendary Greek heroes to be viewed in sculpture is Achilles, whose dramatic adult story is told by the epic poet Homer in his masterwork The Iliad. Achilles Wounded by the Heel by Charles Alphonse Achille Gumery

Greek sculpture was the first and only ancient art form to break free from conceptual conventions, exploring how art might imitate nature, or even improve upon it.

Over the centuries since those who valued its beauty and timeless aesthetic sought to conserve and preserve examples excavated by archaeologists by copying them.

Much of the ancient Greek sculpture we know about today is because of later Roman copies.

The classic style was based primarily on the male nude, whose form dominated the visual arts of the western world for nearly two and a half millennia.

Achilles as a subject stood tall among the pantheon of Greek Gods and heroes, although he was half mortal.

Despite his seeming perfection, while striving to win our admiration Achilles was, and always remains subject to human frailty. Perhaps that’s why we can still connect with him today? 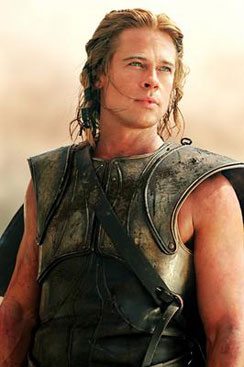 The ancient Greek civilisation was built on the foundation of the heritage established during the Greek Mycenaean period. Mycenaean culture dominated the eastern Mediterranean world from the 15th to the 12th century before the Christ Event.

Together with nearby city state Tiryns, Mycenae played a vital role in the development of classical Greek culture.

It confirmed its character by building on the legacy of the intellectual ideas, philosophies and values of each city state as one great creative force.

Mycenae was a natural rock citadel and capital of the legendary King Agamemnon. From the hill on which the palace was located its people could see across the Argolid, a region in the Peloponnese mountains, all the way to the Saronic Gulf, which is part of the Agean Sea.

The Mycenaean civilisation developed in the late Bronze age, so to use this material to produce classical statuary has always seemed to me most appropriate.

One of the last ventures overseas of the Mycenaean Greeks was the reputed major expedition against Troy.

Legend tells us King Agamemnon besieged the ancient city for ten years, before taking it by deceit by hiding soldiers inside the gift of a huge wooden horse. Another superb Achilles wounded by the heel, this one in the Villa Reale, Milan by Innocenzo Fraccaroli (1805-1882) an Italian sculptor, who won Brera Academy’s 1829 prize for sculpture

One of the great sculptural images of Achilles, Greek hero of legends rendered during the nineteenth century, was a life size figure created by Charles Alphonse Achille Gumery (1827 – 1871) a student at the École des Beaux-Arts at Paris.

In 1850 Gumery won the prestigious Prix de, a competition first created in 1663 by Louis XIV, for his sculpture Achilles Wounded in the Heel by Paris.

The son of the mortal Peleus and the sea nymph Thetis, when Achilles was a boy a seer, Calchas, prophesied the city of Troy would not be taken without his help.

His mother alarmed, as one story goes, held him by his heel and dipped him into the fabled river Styx (separating the world of the living from that of the dead).

She believed if the water covered him he would live forever. However as she held him by his heel it remained dry and therefore, unprotected.

When he was a child Achilles was given over into the charge of Chiron who had the expertise to equip Achilles with the skills necessary to protect his life at all times. One of those was archery, the subject for our sculpture and the weapon that would eventually bring about his demise.

After his education was complete his mother hid him away in disguise. However Odysseus, Greek king of Thrace discovered his true identity and took him to the city of Troy.

Achilles captured 23 towns and was given a war prize, a woman – Briseis. The military leader of the Greeks King Agamemnon took her from him and Achilles was so enraged that he refused to fight for the Greeks ever again. 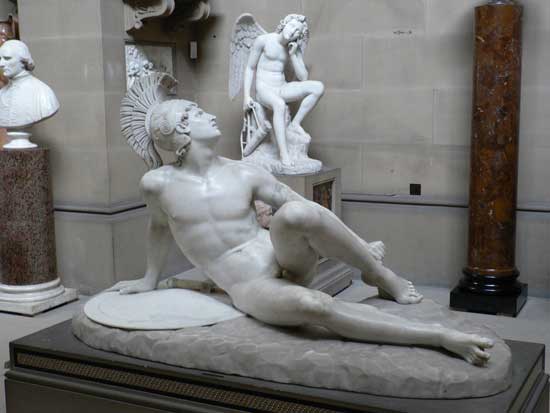 The wounded Achilles in the Sculpture Gallery, Chatsworth

His friend Patroclus, wanting to give him time to recover, stole his armour and fought in his place. Patroculus was killed by the Trojan hero Hector, who thought he had slain Achilles.

When he discovered what had happened Achilles was overwhelmed with both  grief, and guilt, at the death of his friend.

He returned to kill Hector, dragging his body behind his chariot outside Troy’s walls in an act of uncharitable desecration that went on for days.

Hector’s father Priam came to the Greek camp in disguise and begged Achilles for the return of his son’s body, so that he could be buried according to tradition.

Achilles, in respect for the old man’s grief relented, granting his wish and graciously allowing him to take Hector’s body away, revealing his ability for compassion. 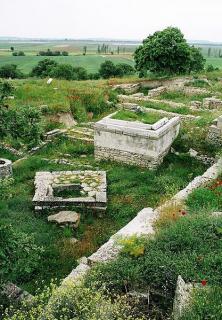 Ironically it would be Priam’s youngest son Paris, whom Helen had run away with causing the Trojan War in the first place, who would finally shoot the arrow into Achilles’ heel, bringing him down.

German businessmen Heinrich Schliemann 1822 – 1890, as well as others, excavated the site. Schliemann funded his own search for the Greek heroes as recorded by ancient Greek poet Homer in his work The Iliad.  He wanted to see if they had actually existed and that legend was in reality based in truth.

His excavation of the site, thought to be the Troy of legend uncovered impressive architectural remains.

They found a well-fortified citadel with strongholds for soldiers, weapons and officials, as well as storerooms for grain in case of siege.

The wealth of the community had been invested in their King, whose treasures like Egyptians had been placed in his tomb. The wounded Achilles at Corfu

Archaeologists during the twentieth century disputed the level Schliemann had thought was the legendary setting for the historic battle for Helen of Troy, ‘the face that launched a thousand ships’.

The site yielded the ruins of more than six cities, which had all been rebuilt on one spot as well as a royal treasure of gold.

Chatsworth House at Derbyshire in England is one of its greatest treasure houses for the visual arts. Annually it draws thousand and thousands of art-lovers, collectors and casual visitors, both young and old. One of the most popular spaces in the house is the sculpture gallery of the 6th Duke of Devonshire. William Spencer Cavendish became the 6th Duke in 1811.

As part of his development of Chatsworth House, during the 1820s and early 1830s, he created a new north wing that included a Sculpture Gallery to house his collection of contemporary sculpture, the majority of which was sourced in Rome, and other rare and precious marbles.

A major project to re-display the sculpture gallery began in 2008 and was completed in 2009. It includes another simply sensational sculpture by Italian sculptor Filippo Albacini (1777 – 1858) of Achilles, our ancient Greek hero, who was modelled so beautifully by so many artists in the nineteenth century and, after the classical ideal.

Each year Ian and Lee Lucas open their lovely parklands at beautiful Montville in Queensland for you to enjoy music from the great composers.