25 Years ago when a young violin virtuoso Richard Tognetti, who had been studying overseas returned home to stride onto the stage and take over Directorship of an ensemble known as the Australian Chamber Orchestra (ACO). Established in 1975 I was there on that very special night, already a subscriber. Tognetti was a passionate young man overflowing with ideas, full of an energy that was commendable and with a burning commitment to his craft that was admirable. When Frans Bruggen took up the Baton to direct Richard and the ACO playing Mozart’s Last Symphonies for the first time I was also there. He was honouring Austria’s musical genius composer Wolfgang Amadeus Mozart (1756-1791) whose sensibility for form and beauty of sound, combined with fantasy and poetry in music meant his wonderful works would be wide ranging in their influences from the eighteenth century until today. The Summer of 1788 was a prolific composing period for Mozart in Vienna when despite having difficult times personally, he composed his three greatest works in symphony form. Today they are known as Mozart’s Symphony No 39 in E-flat major K543, Symphony No 40 in G minor K 550 and for the finale his sublime Symphony No 41 ‘Jupiter’. They were at an artistic pinnacle of his achievements in life.

At Sydney City Recital Hall, at Newcastle City Hall, at Melbourne Arts Centre, Canberra’s LLewellyn Hall and in Brisbane at the QPAC Concert Hall, between 29th September and the 12th October 2015 an enlarged orchestra including woodwind, brass and percussion playing alongside the ACO strings, will present Mozart’s three last symphonies, thrilling audiences. 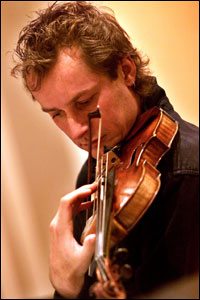 From a slow, somewhat exalted and grand beginning the 39 seamlessly merges from one scene to another as it builds in momentum, sweeping the audience from the dark into the light.

Passion and pathos are characteristics of the Symphony 40.The Jupiter was completed in 1788 and was Mozart’s last symphony, with its majesty of conception likened to an emotional high wire act, it is a triumphant and exciting masterpiece, ending with a grand apotheosis. Its secured for Mozart an eternal position within the realm of the masters.

To celebrate his 25th year at the helm of the ACO Richard Tognetti will reveal both Mozart’s ‘humanity and brilliance’ and tell a tale of his own musical adventures. Mozart’s Last Symphonies with Richard Tognetti 29th September – 12 October, 2015 – BUY TICKETS