Keeping up appearances together, British actress Patricia Routledge starting in Tasmania will tour Australia from May 2, 2014 in a show with Australian born London based pianist Pier’s Lane. He is Artistic Director of the Australian Festival of Chamber Music in London and Myra Hess Day at the National Gallery, London.

She will be telling the story, while he will be tickling the ivories, as together they present Admission: One Shilling, a wonderful show inspired by the daily classical music concerts given by celebrated pianist Dame Myra Hess and her talented musician friends at London throughout the blitz during World War II.

Dame Myra knew the people of London were missing their exposure to arts and culture with the National Gallery closed. The arts, she believed, played a spiritual role in the health of any nation at the best of times – and would, as indeed it did during wartime. The Director of the gallery Kenneth Clark (Civilisation) had been desolate when describing the scene left by the departure of the paintings for security at first in various locations throughout Wales. Then as threat of an invasion of Britain in 1941 became a possibility, they were moved again to the underground safety of a slate mine.

‘Every picture had been taken away, but the frames remained and multiplied the general emptiness with a series of smaller emptiness’s…when I returned to the Gallery, after the first all-absorbing task of evacuation was more or less safely over, I walked around those large, dirty, and (as it turned out) ill-proportioned rooms, in deep depression.’* Kenneth Clark said.

Myra Hess proposed to the Director Kenneth Clark that she be allowed to use the National Gallery free each day as a venue for concerts of classical music at little cost for the public, a shilling.

He was truly delighted with the idea and agreed. 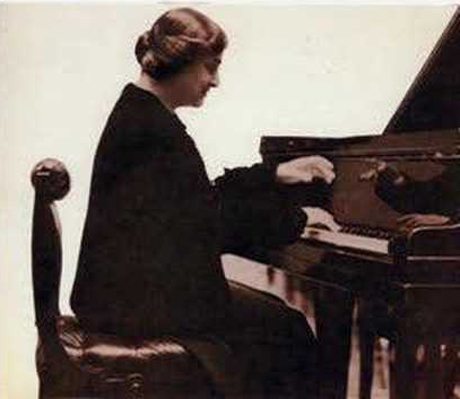 Dame Myra Hess, making music accessible to all and inspiring her countrymen and women during World War II

Before Myra Hess’s grand initiative a front-row seat at a first rate London concert had rarely, if ever, been available at such a price.

He was happy the Gallery would be used for ‘the enjoyment of beauty’, not as an administrative war office.

In the true spirit of carpe diem, Dame Myra seized the day, and set about bringing her idea to fruition with the help of friends, followers, supporters and musicians.

Holding the concerts also satisfied and fulfilled Mary Hess’s own long-held ambition, to make the wonders of classical music easily accessible so that people from all walks of life and all backgrounds could know the joy and beauty of the music by some of the greatest composers the world has ever known.

It was one of the most important ideas the thousands of Englishmen and women and their allied counterparts were fighting for; the symbols and institutions of western liberty and freedom, as well as our inherent right to enjoy and advance our rich cultural heritage. Wartime concert being held in the National Gallery London. Photograph taken from the musicians’ platform into audience – courtesy The Imperial War Museum, London

By the end of the war when Dame Myra Hess’s concerts came to an end in 1946, the three quarters of a million people (including a number of Australian servicemen and women) that had attended one of the 1,698 concerts she organised and managed, all held her in high esteem.

Admission: One Shilling the show starring Routledge and Lane relates the remarkable real-life story of this truly remarkable lady and her all-important legacy.

For services to her country in crisis in 1941 King George VI deservedly made Myra Hess a Dame Commander of the British Empire (DBE).

Devised by Nigel Hess, Dame Myra Hess’s great-nephew, Admission: One Shilling takes the audience through those wartime years by way of Myra Hess’s recollections and music she performed, along with a number of powerful images of wartime London from glass strewn streets to falling doodlebugs. Patricia Routledge on stage at the Minerva Theatre, Chichester photograph by Hattie Mills for Clive Conway

Nigel Hess noted “the script for this performance (narrated by Routledge with music performed by Lane) has been compiled from Myra’s press and radio interviews during that time’ because most of her day was taken up with playing, practicing, and organizing the lunchtime concerts.

He noted that it was Myra in her own words: redoubtable, courageous, inspiring. She always had a twinkle in the eye and Hess said “ I am very proud to call her my great-aunt”

Piers Lane’s grand piano accompaniment will not only deliver the flavour of those vital wartime concerts, but also will culminate in a moving rendition of Bach’s Jesu, Joy of man’s Desiring.

Piers grew up in Brisbane and these days enjoys a busy international career that sees him performing regularly at the BBC Proms and with many of the world’s leading orchestras and conductors.

This delightful pairing with Patricia Routledge to tell this wonderful tale is an uplifting story about the healing power of music. Her relationship with her eccentric TV family was best summed up when she said “Richard, you know I love my family, but that’s no reason why I should have to acknowledge them in broad daylight!”

Dear Onslow (Geoffrey Hughes), Daisy (Judy Cornwell) and Rose (Mary Millar), they were always turning up inconveniently, although her son Sheridan, who had lengthy phone calls with his mother trying to extract money from her and his father remained a mystery, as did her sister ‘Violet – the one with a Mercedes swimming pool, sauna and room for a pony’.

Routledge in all her roles was memorable including a marvellous Lady Bracknell, when she came down under for the first time performing in Oscar Wilde’s great play “The Importance of Being Ernest’ in 2001.

They are among the greatest of the many unknown uplifting stories about how life was lived at London during World War II. Dame Myra Hess through her bravery and commitment to, and belief in the beauty of music, truly touched many people’s lives Myra Hess on the Steinway grand in the National Gallery, London

For the musicians as well as their audience the concerts at London during the outbreak of war provided relief from the gloomy and frightening news that was daily reaching Britain from Europe during the early months of the war. Bomb damage to the Gallery during WW2 1940 and 1941, courtesy National Gallery, London

Despite bombs raining down around her Dame Myra and the musicians just kept on playing in true theatrical style, winning the hearts and minds of the people who attended.

The performers were all paid the same flat fee, regardless of talent and experience; an ethos of equality that also prevailed in regard to nationality.

In May 1940, as news reached London of the German advance on the Netherlands, the celebrated German Lieder singer, Elena Gerhardt telephoned Myra Hess to cancel her appearance at the Gallery.

‘Myra,’ she told her friend, ‘I cannot sing today. Nobody will want to hear the German language’. Hess reassured Gerhardt this wasn’t the case and she offered to accompany her on stage.

The audience sensing her nerves responded with an ovation, one that was warm enough to dispel any doubts that it was the music that mattered. The Painting of the Month started in 1942 with curators bringing back one work of art to London each month for people to see in splendid isolation – the beauty of art and music.

Having difficulties with funds towards the end of the war was just another challenge Dame Myra overcame, her most famous musician friends and patrons chipping in to help her keep them going.

As a successful example of what could be achieved on a limited budget with state support, the National Gallery concerts made a valuable contribution both to the popularity of classical music in Britain and to the development of their funded arts program that is still so important today

When the concerts ended in 1946, commentators pointed out how Dame Myra’s success had proved how cheaply such events could be staged if the venue was provided by the state.

They argued that the sizable audiences attracted to the National Gallery indicated a public appetite for culture at an affordable price, and stressed the need or other suitable sites to be found. Queue for $5 concerts in the Town Hall at Hobart Baroque, Tasmania 2014

They cost $5 (a shilling equivalent today) and the people came clutching their $5 bills in their droves every day, packing the hall to capacity and proving Dame Myra Hess’s point entirely.

Hopefully the Admission: One Shilling event, plus Leo Schofield’s efforts in Tasmania, will ensure that politicians, government officials and art galleries in Australia not only sit up and take notice but also that the spirit of Dame Myra Hess will inspire them as well, so that they will continue to do their bit to share the love, as well as our rich musical and cultural heritage, around.