Meeting special people from many walks of life and all background during my life’s journey, both in Australia and overseas has been one of my life’s greatest pleasures. Over the past eighteen months I have been having an adventure in art with the owner of Mealie’s Art. Meeting New Zealand born painter, sculptor, drawing and chalk artist Amelia (Mealie) Batchelor, whose view of life is a continual journey of discovery, has been one of great joy. We met at Brisbane where we had both found ourselves after leaving the cities where we were born. Me from Sydney, she from Auckland.

An exhibiting visual artist, gallery curator, community arts facilitator with a professional and creative approach to all aspects of art and design, Mealie’s main aim is to execute works with both integrity and flair, achieving very high standards of professionalism.

Colleagues at Brisbane City Council and Brisbane Marketing, who knew us both separately, put us together to work on a special project. They introduced us online in March 2009, and after a flurry of emails we met at Aroma’s in the old Regent Theatre (sadly being pulled down) on Queen Street Mall at Brisbane in early April 2009.

We gradually discovered over a latte just how alike we were and how many outlooks on life we shared. And, when we discovered our birthdays were a day apart we laughed out loud as we both knew two Sagittarius’s together is definitely double trouble, although as we like to believe, at least ten times the fun. She told her friends that night about the old broad who gave her a glimpse of what she might be like in 20 + year’s time. Scary stuff.

We then bonded over a six month period as daily we set out to put in place all that was required from her perspective as the appointed Artist in Residence and from mine as Producer of an important interactive community event, which was an initiative of Brisbane City Council Brisbane 150 Celebrations.

The Big City Drawtook place on the Queen Street Mall in the 2009 June/July School Holidays over thirteen days.

It was all about bringing music and drawing together as conduits for communication in the ever expanding multicultural creative community at Brisbane. It was enjoyable, educational and allowed people from all walks of life to participate.

It was all about promoting drawing as a tool for thought, creativity and cultural engagement and 14000+ people were actively involved. It was good we had an understanding team leader in Caz Osborne, who headed up the BCC 150th Celebrations. Thanks Caz for introducing us. 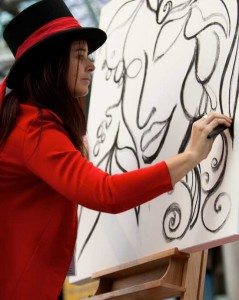 We are grateful that you encouraged and inspired us to combine our abilities and experience, which we found complimented each other perfectly. It enabled us to breathe life into this amazing community event that had people from all walks of life and backgrounds drawing and doodling to music.

The large size Doodle Doll, Heart, Leaf and Guitar designed by Amelia were about representing the event’s philosophy and reflected the people, their passions, their concern for the environment and their love of music.

She also designed beautiful banners for Brisbane, which were completed by individuals and community groups. And, she patiently and quietly assisted the many community groups who wanted to draw their own.

Each day the Westpac volunteers involved in the event built totem poles around the mall stage to show off people’s drawings as they were completed. Everyone got into the action and a great deal of fun was had by all. Amelia inspired everyone as she drew on stage to live music.

A lady with a great talent and a very generous heart Amelia says ‘Life is art, and I take it to heart, especially music, which invites expression’… constantly I am inspired and enriched by people, the land, the animals, and the ocean. I respond immediately to the intensity of light, and life in big cities’. During the event she invited a number of her artist friends to join her on stage to draw with her and it became double the fun. The live music was supplied by a diverse group of musicians who lit up the stage as they responded to Amelia’s lead.

Soon her experiences will broaden once again as she moves into the lovely northern climes of NSW in 2011 and becomes an artist with her own residence.

Amelia has just let me know she is completing the purchase of a house with a gallery attached, in the rapidly expanding city of Murwillumbah. She has a great deal to do before opening the gallery in 2011, but knowing her creative abilities and great determination, it will be very special. She is also sure to capture many a country heart. I will keep you all in the loop as it comes close to her opening. In the meantime prior to Christmas she has been commissioned to complete a series of murals by Brisbane City Council for the new Kenmore Library, which both kids and adults alike are sure to enjoy. They will be a fitting tribute to her many gifts and reflect her continuing commitment to the expansion of a creative community at Brisbane. Graphic design was Amelia’s original career choice, which was made after spending her childhood drawing from the depths of her imagination. Over two decades of collective experience, in a varied and diverse group of Queensland based advertising agencies and design studios, qualified her in a wide range of skills. It has also offered many opportunities to expand her expertise in a variety and diverse range of creative fields.

Adapting to constant change in the creative world is important these days as technology drives it forward into the digital age.

As well as producing her own works she has developed group exhibitions, facilitated regular art workshops and managed public art opportunities for other local artists.

A multi-platform artist, whose skills were founded in the mediums of paint, paper, and nature based sculpture, wire and photography, specializing in community art projects have enabled her to have an ever enlarging project based Portfolio.

Community art projects take a special ability as producing an artwork to be enlarged requires a great focus on detail, at which she excels.

One of her ongoing intriguing assignments is working as a consultant to Leighton’s, completing technical drawings for their expanding energy projects.

Amelia is all about the lines that link community and culture together. Under her guidance at the Big City Draw in June/July 2009 the base of major sponsor Westpac’s Wall, on the corner of the Mall and George Street, became a giant ‘canvas for conversation’ lined with recycled card donated by another major event sponsor Visy.

Thousands of people drew in the tradition of drawing masters of the past using black and red crayons from MonteMarte.  Pop hero Michael Jackson died on one of the days we were all there and the wall turned into a giant memorial to this great entertainer. They came in their thousands and drew to music from an eclectic program featuring pop, classical, folk, jazz, Celtic, Brazilian and blues bands performed on the Queen Street Mall Upper Stage.

Amelia turned the mall into a buzzing playground of free drawing activities for everyone from toddlers to seniors. At Mealie’s Cave behind major sponsor Milano’s children completed carpets full of colour. In Milano’s people completed mini doodle dolls, while enjoying their latte. Following the event Westpac Manager James Golden, who was so thrilled with being part of such a great community event, invited Amelia and her friends to exhibit the art they had produced during the event for two weeks in Westpac‘s city branches. It was a great success. 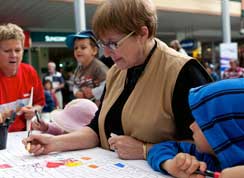 Mealie’s current creations reflect her ever expanding view that the earth is a wonderful, insightful, research program to help her creative currency expand and prosper.

She is an artist who inspires all around her to want to participate and has so many great gifts, the most important being the gift of giving from the heart.

Am so glad we met Amelia and wish that you will continue to enjoy your own adventure in art as you continue to help the rest of us imagine the future. And, thank you for allowing me to share. 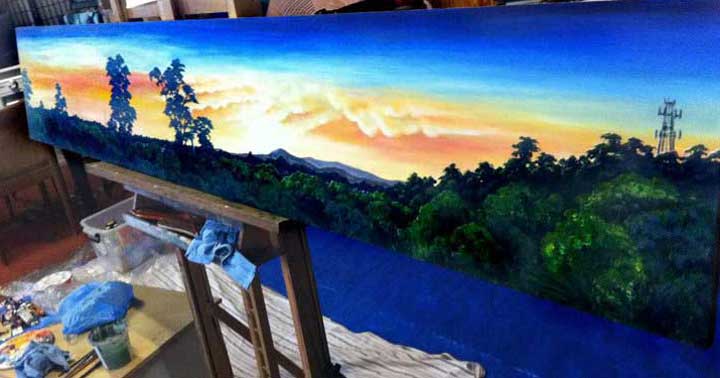 A Work in Progress - Sunset over Kenmore Hills