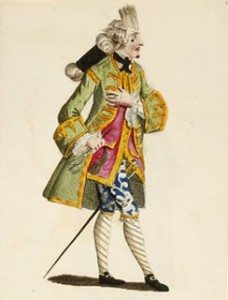 During the 1770’s in England, and in France, there was a simultaneous elevation of the hair for both men and women,; at first it was simply brushed stiffly up from the forehead, and then suddenly it soared, totally out of control, while the queue behind was bound into a greased club. Powder, pomade, and even plaster of Paris were the ingredients but most especially the powder, greyish, pink, blue, violet, and laced with scent. 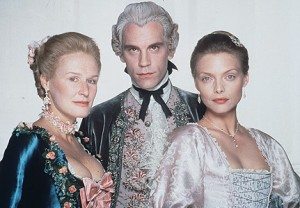 The bag wig for gentleman had been popular since the 1730’s. The hair was enclosed in a case of ‘gummed’ (stiffened with gum) black taffeta and drawn tight with a string, the string itself concealed by a black rosette or bow. Very fashionable at the court of Louis XV, it fitted perfectly with the libertine ways of the time. In the movie Dangerous Liasons actor John Malkovitch as Vicomte de Valmont wears one. Throughout this period powder was used on the hair as men had discovered long before women that grey or white hair flattered the face, made the eyes look brighter and eliminated one of the signs of age, grey or white hair. Sometimes the ribbon ends of the bag, or tye as it was known, were brought round the neck and tied with a bow ornamented with a jewelled pin. This was the beginning of the black silk tie; this variation called the Solitaire. Hair became larger during the ‘40’s and was the chief masculine mode until the 60’s with innumerable variations on a theme; bushy ‘pigeons wings’ (over the ears) the cauliflower; the comet; the royal bird; the stair case; the rose, the long bob, the short bob and strangest of all, the ‘she dragon’.