Art is a language in images, a method by which we communicate ideas, express conceptions about self, society, culture and community.

Within the scope of human history art has always concerned itself with the natural, the supernatural, the real and unreal, seen and unseen, the past, the present, the future, the transient and the eternal. 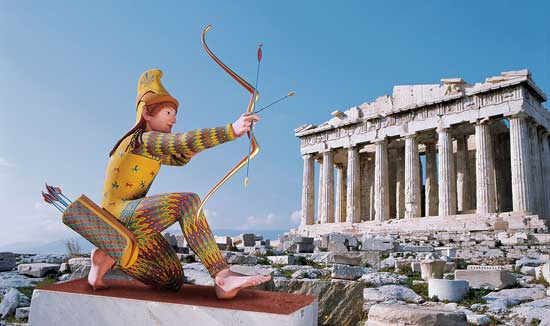 Trojan Archer from the Temple of Aphaia, Greece reconstructed depicting original colours by the Glyptothek Museum, Munich, seen here featured against the backdrop of The Parthenon on the Acropolis at Athens

‘the aim of art is to represent not the outward appearance of things, but their inward significance’ said ancient Greek philosopher Aristotle (384-322)

In all ancient cultures, including Egypt, Syria, Babylon, ancient Greece and Rome the symbolical use of light in any form denoted both high dignity and power.

Like the use of a crown, light characterizes and differentiates a figure as well as distinguishes and exalts it. 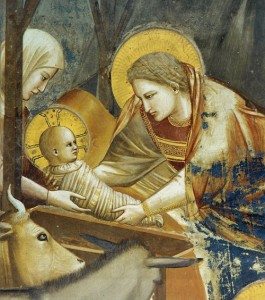 At the earliest stage of Christian art every image of Jesus, the Christ looked different, it was his gestures, and the stories told, not his appearance that allowed people to recognise his image.

It was based on a Greek classical type of Apollo, who was in the pagan tradition one of the twelve Olympian gods, and a symbol of light – the Sun God.

The city at Ravenna in Northern Italy, in a number of its most notable buildings, preserves a fabulous collection of Roman Byzantine style mosaics mostly dating from the sixth and seventh centuries.

The mosaics are there because in the year 404 Ravenna was chosen as the site of the Imperial residence of Byzantine Emperor Honorius (395-423).

From around the fourth century onward the subject of the life and death of Jesus had a major role in the language of art with symbols of light, whose form and shape originated in natural phenomena.

Artists used a luminescent cloud or charismatic circles of light and these were often used to surround the head, or the whole figure.

This was an essential element in a language used by many painter,  who wanted to deliver or, otherwise reinforce a message to the viewer about what their imagery meant, or represented. So they developed many varieties of the nimbus, aureole and halo. 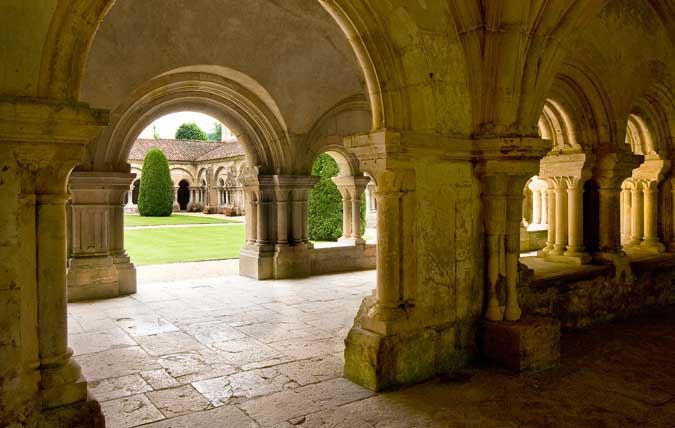 Jesus, the Christ, Mosaics at Ravenna

Jesus was born into a religious tradition, Judaism, that did not allow portrayals or likenesses of someone considered divine.

Therefore as there are no contemporary accounts of his appearance it was, and still is entirely open to interpretation.

What we do know is that any representation of him reflects the spiritual world of the artisan in his time, the desires of the patron who commissioned it and the needs of the viewer.

At its best superb austere French Gothic Cistercian architecture has been described as an ‘intelligent, correct and magnificent interplay of volumes yet assembled under light’. 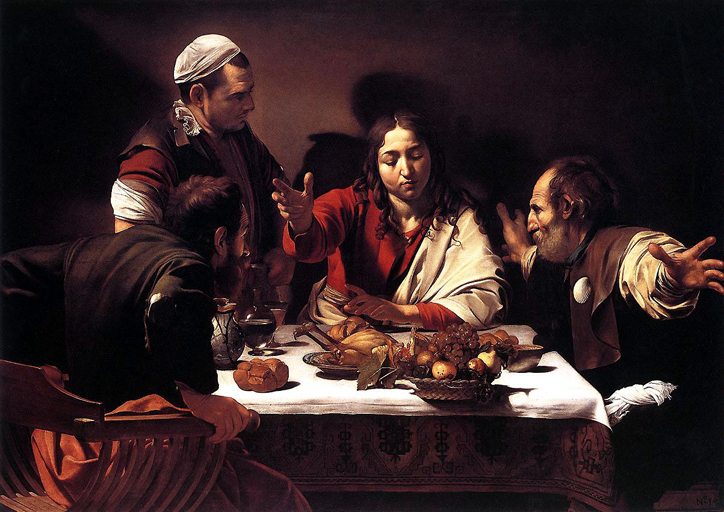 Throughout the Middle Ages the glory of heaven was reflected by the church as a foretaste of the heavenly banquet on offer to everyone.

Over the centuries artisans strove to devise different ways of assisting individuals, as well as communities to engage ever more deeply with the Passion of Christ through imagery provided in many forms on parchment, on paper and even on leaves of ivory, so that they could be used for devotional purposes. He managed to brilliantly portray faith and humanity mingled together as he captures the tenderness and wonder of Mary as she receives her newborn swaddled son.

The image celebrates the role of Mary symbolically as a mother for all people and in every age and time. She and the child are surrounded by a halo of light, radiating their divinity.

Dante’s symbolical use of a circle of light in his opus denoted high dignity or power and highlighted the ‘divine characteristics’ that inspire the loftiest sorts of humanity.

His dissertation remains one of the pillars upon which European literary tradition was founded. 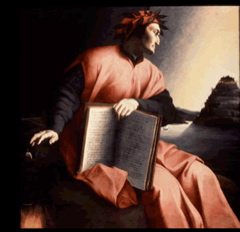 Completed just before his death in 1321, it quickly reached a large and appreciative audience.

Dante inspired the greatest of all the architects of the Renaissance in Italy, Filippo Brunelleschi (1377 – 1446) who ‘was given to us by Heaven to invest architecture with new forms’ said artist-author Georgio Vasari (1511-1574) of him in his Life of the Artists one hundred years after his death.

It was between 1420 and 1446 that Brunelleschi initiated a new epoch in the history of architecture at Florence.

A passionate Dante Scholar, Brunelleschi infused his architecture with the sacred circle to admit or refract light. He also invented new methods of construction that would ultimately influence the way all other architects would think in the future, as well as the shape of buildings to come. Brunelleschi was contemporarily described as a ‘universal’ man, an architect, arithmetician, excellent geometrician, sculptor and painter.

His subsequent fame is based on an ability to represent his ideas in words and images, as well as on a capacity to solve the problems of how to build them.

Perhaps inspired by the circle of light from Dante’s Paradiso he advised the capo maestro of the Duomo at Florence Giovanni d’Ambrogio to construct within the great tambour large circular windows to flood the interior of the duomo with light. View of the Duomo at Flornece from the Medici Palazzo

The tambour on the Duomo at Florence was a device designed to transform the octagonal Gothic shape of the work completed below to support the rounded weight of a huge cupola above. Brunelleschi was given the commission to design the first dome to be built since antiquity. Deposition from the Cross, Caravaggio

It was in the late Renaissance period that Michelangelo Merisi da Caravaggio (1573-1610) became the master of light in painting. He used light in a new and exciting way, but always in regard to reverence and respect for the meaning of light traditionally in symbolism, which was to exalt or dignify.

His works reflect his own unconventional character as he invented complex systems of illumination whose source was always out of view. His powers of observation in bringing together objects of different texture, shape and substance and contrasting them were inspired.

Hands and feet were used as symbols by the gestures they made or by their pose. His natural style was at the time startling, and today he is recognised as having painted some of the most moving religious paintings in the history of western art.

Brilliant effects of light and shadow were symbolic of the struggle central to Christianity, as Saint Paul said ‘to open their eyes that they may be converted from the darkness to the light and from the power of Satan to God, that they may receive forgiveness of sins. 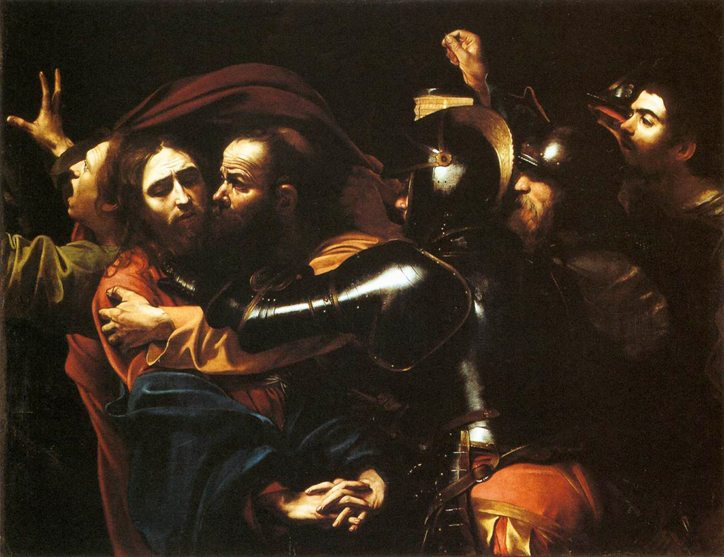 This is the light that represents, and is symbolic of man’s quest for eternal life one which would only be made possible through the eventual sacrifice and resurrection from the dead of Jesus himself.

And God had said, let there be light: and there was light And God saw the light, that it was good.

Caravaggio’s Christ is being gently born from the cross to his borrowed tomb by two members of the grieving group around him. Nicodemus is embracing Christ’s legs, Saint John touching Christ’s wound, while his aged mother Mary blesses him, extending her arms to embrace the whole group.

The slab of stone on which he is to rest refers to Jesus the Christ as the foundation stone of the Christian Church. In him was life; and the life was the light of men.

A painting of Jesus as the Light of the World by English artist Holman Hunt (1827 – 1910),  one of the founders of the Pre-Raphealite Brotherhood, was donated to Keble College at Oxford in 1872 by the widow of Thomas Combe, Printer to the University, on the understanding it would hang in the main chapel.

At the time art critic John Ruskin (1819 – 1900) cited Hunt’s The Light of the World as an ‘example of authentic visionary art, which combined ancient faith with modem realism‘.

Jesus is portrayed knocking on a door that has no handle, representing an obstinately closed mind.

This symbolism seems particularly appropriate when you discover that William Butterfield (1814-1900), architect of the College was opposed to any notion of hanging the painting in the Keble College Chapel, and so he made no provision in his design to accommodate it.

When the Library opened in 1878 it was placed there initially. Butterfield apparently also refused architect J T Micklethwaite, who had been retained to design a smaller side chapel, permission to accommodate it in their either.

Since the 1890’s it was moved to a place in a side room off the larger chapel. The artist, Holman Hunt was reputedly so incensed at the treatment of his painting by the toffs at Oxford he painted a much larger ‘duplicate’, which today hangs in St Paul’s Cathedral at London.

The easy accessibility of this significant work to the British public and international tourists over the past century or more, has meant that it has become far better known than the original at Oxford.

Although an aim of art, over the centuries was enlightenment through illumination, it appears some people remained unable to see.