Last week I was invited by my vivacious friend Leah to view a wonderful exhibition at the Art Gallery of NSW entitled “Kamisaka Sekka, dawn of modern Japanese design“.

Featured in this harmonious collection was the very gracious Sydney based designer Akira Isogawa. 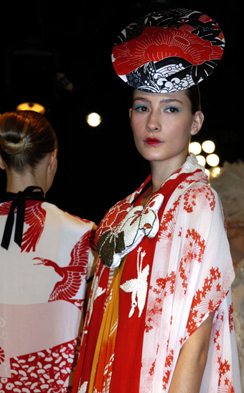 Born in Kyoto, Japan in 1964, Isogawa moved to Australia in 1986. He studied fashion at the Sydney Institute of Technology, and soon became one of our most celebrated designers.

As he says himself, “I translate fabrics into soft and romantic silhouettes, using natural fabrics like silks and cottons which are kind to the skin”, and what a beautiful language he speaks.

The Rinpa art of this exhibition is a great source of inspiration, as it originated in Kyoto, his hometown, in the early 1600’s.

Over the centuries it evolved into a significant school of art and design. It also heavily influenced Art Nouveau, and the British Arts and Crafts movement.

You can see in Akira’s fabrics he has absorbed the traditions, aesthetics, colours and imagery of his native Japan.

It is easy to notice the link between art and fashion in his clothes.

His repertoire is based on the flowers of the four seasons, the natural world, Japanese literature and poetry .

A beautiful example of a Japanese style poem included in the exhibition follows; 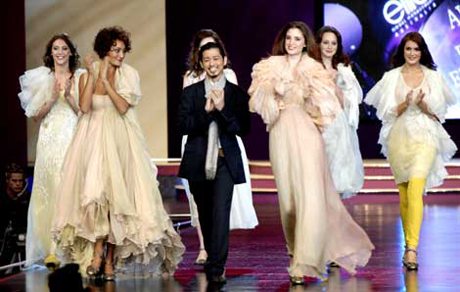 I saw you in my dreams
on a spring night,
even though I had abandoned
my feelings for you,
I wait again 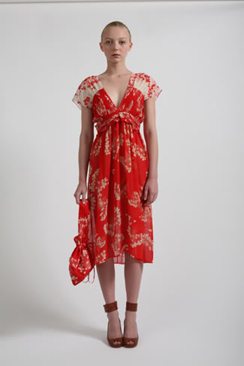 Simplified shapes, bold designs and decorative patterns are all hallmarks of the Rinpa style.

There is such a thoughtfulness of choice. They all drape beautifully and feel fabulous to the touch.

Such care and respect is shown to the fabrics.

Next to bare skin they would be sublime and a joy to wear. And the exterior beauty is not all!

With intricate panelling work, the inside is sometimes more precious to behold. This is a lovely surprise element. Akira shows a beautiful sensitivity with his designs, turning the traditional into modern. Cherry blossoms, cranes and fans are incorporated into his fabric designs. There is great restraint in his work.

When first viewed, his pieces look deceptively simple, but on closer inspection the devil is in the detail.

He has also been invited to show at the MCA, and twice has been included in the Powerhouse Museums “Fashion Of The Year” retrospective.

Since 1998 Isogawa has shown in Paris. With four stand alone boutiques in Australia, two in Sydney, one in Melbourne and one in Brisbane, it is easy to see why women love his clothes.

Stunning beaded details, hand embroidered organza and marvellous motifs are all part of his couture, they are definitely for the visual and tactile woman. The serenity and modernity of the designs featured in the exhibition at the Art Gallery of NSW was divine. With five exquisite fashion pieces by Akira Isogawa featured it was not nearly enough frocks for me.

A story within ‘Little Women’, and the book itself, illustrates a universal truth that how, when we give of ourselves we can and will live a meaningful life