Producing ideal creations consistent with reality, as in literature, as distinct from the power of creating illustrative or decorative imagery is hard enough. However producing both in one body of work is even harder.

At Sydney visual art has a creative champion in Alexia Sinclair. She has a rare ability to face and resolve difficulties while holding in her heart a very real perception of the real facts or truth… a state of knowing.

There is no doubt everything old becomes new again and fashion is always on the move. From time to time it likes to wander onto the dark side, as well as onto the bountiful, its two extremes.

Award winning Australian Fine Art photographer and digital artist Alexia Sinclair explores both. Her artworks are a perfect example of the head, hand and heart coming together.

She can and does articulate her intentions with great clarity in her imagery, if only we want to read the message. She is inviting us to come to terms with who and what we are, a creative people all with skills of our own to contribute to making a whole.

However to do that we need to ‘Know thyself’ first… an ancient concept, that as human beings we still have not all come to terms with yet, although we are well along the road.

Alexia Sinclair believes she has given herself a balancing act to surmount in many way, as she straddles the worlds of both commerce and visual art production. I would suggest however, they are one and the same. It is only others who seem to need to put everything neatly into boxes and label them ‘fine art’ and commercial art’ in the first place that perhaps have the challenge. What she is doing is remaining true to her art.

Coming across images of her work in any genre they leap out at you as a pursuit that enfolds and holds her captive in one instance, but emboldens and sets her free in another.

It can set you free too if you allow it, helping to break down the boundaries and barriers we create for ourselves. It will go on show at the Black Eye Gallery for Contemporary Photography in Paddington, Sydney on 17th February – March 8th, 2015.

This is an opportunity for Sydney visitors and residents to enjoy a truly creative encounter with the arts.

Passion is an emotion Alexia embraces and knows well. Her work is all about providing an art of pleasure.

Aesthetically and in this instance, it is all about a line of ‘beauty’, which in this case too will also be in the eyes of the beholder.

Every encounter with her work engenders new and unique reactions. Working with models and flowers and the help of her volunteers, Alexia has designed this series to be ‘sensual, playful and flamboyant.

She observes the ‘floral backdrops within the series pay homage to the dreamlike landscapes of the Rococo period’.

The series of photographs have been created with skill and attention to detail and consist of her ‘hidden gardens, mazes and wild flower meadows’.

Her images form a ‘… backdrop of decadent garden parties and mischievous encounters’. The work of Alexia Sinclair came to my attention fully when she produced the imagery for the Queensland Ballet‘s 2013 program.

She had come into a visual environment of art that I knew well.

Having an interest in ballet and having seen Mao’s Last Dancer, Li Cunxin the artistic director’s story, she said had inspired her work. Variola Vera, The Art of Saving a Life 2014, courtesy Artist

Then there was her outstanding commission from the Bill & Melinda Gates foundation Art of Saving a Life project with some 30+ artists contributing to a theme of medical achievements throughout history. Her tableau depicted the first vaccine produced by Dr Edward Jenner in 1796. To date her celebrated series ‘The Regal Twelve’ has certainly gained the most attention by portraying historical Queens through contemporary notions of beauty and fashion.

Her Queen Elizabeth I is an enduring image of majesty and power. The series won three national awards in 2007 for innovation and is now touring the world. It is easy to see through her array of work available on her website, Alexia loves the ‘intricate and unusual’. She also has the patience and skill to tell the tale well.

It is also easy to understand that she needs to not only complete the work, but also arrange the setting in which it is encountered for the very first time.

All of this takes time, but is immensely important to our understanding of her work and who she is. Alexia is visually conveying a truth that all our perceptions are formed by the context in which we encounter any situation.

History has proved time and time again that so many people base their judgments, perceptions and conclusions only on what the eye can see, rather than endeavour to understand the journey it has taken to reach that one point in time where lives are either broken down or built up.

Our world is not just black or white, it’s full of grey moments. We are all waiting for the sun to break through and for colour to invade and infuse the objects we see with the full spectrum of its glorious light.

That certainly happens when you encounter Alexia’s work, because in a way she is creating her own new truths. Essayist, poet, philosopher Ralph Waldo Emerson (1803-1882) observed “all history becomes subjective; in other words there is properly no history, only biography”.

All art is a product of its times and a reflection of who we are at any given moment, our attitudes and philosophies, our fashions and passions.

Alexia Sinclair has impressive theoretical and practical credentials, having received her Master of Fine Art, worked in New York as a digital artist and exhibiting at the Australian Centre for Photography and Art Gallery of NSW

She also has an array of awards and nominations with collections established in The University of Newcastle, Queen Adelaide Club, Greenwich Hospital, Sydney and International Art Services. It was when researching Marie Antoinette for her Les Antoinette 2013 project that Alexia Sinclair says she encountered Madame de Pompadour, King Louis XV of France’s mistress, who was also inspired by the sensuous movement of the Rococo style around her at court

It had gradually come to fruition, writhing and spiralling its way into rooms all over Europe after Louis XIV had died in 1715.

In its earlier period during the first thirty years of the century, what became the Rococo style was known as Regence after Phillippe, Duc d’Orleans in his role of Regent over the young Louis XV.

It grew out of the style we now know as Baroque, with its emphasis on symmetry and grand manner in classically inspired architecture, which had pronounced the glory of the Sun King and his control over his domain.

The Duc d’Orleans removed the French court and seat of government from Versailles back to Paris beginning the process that would eventually see the demise of the ancien Regime.

Europe’s economies were all buoyant in his time and Princes and important noblemen required magnificence around them and so they built lavishly.

The Rococo style manifested itself in the decoration of small, intimate, luxurious and harmonious interiors of which the eighteenth century, particularly France, was to excel.

A philosophical poetic movement that embraced the art of pleasure, it had no fixed points at all. The Rococo was delicately elegant, a light decorative style, the word rococo deriving from Rocaille or the cleft, scalloped shell work and rock work in grottoes and other fantastic forms of exotic sea shells, which were much collected and prized.

It had a distinct love for asymmetry, the use of c and s shaped curves, with naturalistic motifs of sprigs of flowers using bright clear colours, popular lacquer colours especially greens, set off by much white and gold and the use of the agrafe or central motif above doorways and at the top of panels.

It was championed in its day by a new independent, rich, less discreetly immoral society clamouring for novelty, pleasure and an enjoyable lifestyle. Much like today really, which is perhaps Alexia Sinclair’s point? Elaborate banquets also formed a major part of social and court life and one of the main purposes of a feast was the display of wealth with silver, and porcelain arranged in multi tiered buffets with serving dishes, bowls and tureens arranged in patterns around a centrepiece.

We have also transferred that focus to real estate today! Alexia Sinclair has undoubtedly been inspired by Madame Pompadour’s love of beauty, scent, and passion for porcelain imagining immediately “a porcelain palace…when she ‘saw this mistress lying in a bed of porcelain flowers, feather in her hand, ready for play’.

It is but a snapshot of a moment in time.

The Rococo was not about control, but about the impending desire for those in society who championed freedom, which would have its final release years later during the French revolution.

It is certain that nearer to the end of her life the Marquise favoured a change to a style we know as Neoclassical. 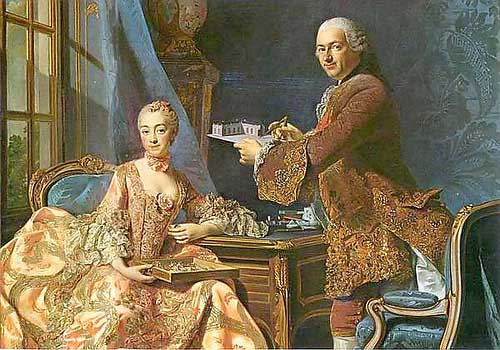 Mme Pompadour had gained a great deal of wisdom in her short life and advocated a change of style to embrace concepts of democratic freedom as reflected in the art attached to the architecture of the Petit Trianon. Petit Trianon, designed by Ange-Jacques Gabriel for Madame de Pompadour, finally constructed 1762-1768 even though she had died four years before.

The Petite Trianon planned by her and Louis and built for their enjoyment would not be finished sadly until after her death when it was made famous or infamous dependent on your outlook, by Queen Marie Antoinette.

Louis XV patronised architect Ange-Jacques Gabriel (1698-1782) and the Petit Trianon, which he designed, broke away from the architectural traditions established previously.

It is a simple, prism with unbroken horizontal elements, relying completely on its subtlety and restraint rather than grand effect.

It was an architectural intervention designed with great sensitivity to its setting, which it complements rather than dominates, perhaps a lesson for us all and our times.

Life and our work do not fit neatly into boxes, whether it is professional or personal context; we must all walk the same tightrope and be who we are at all times and in all situations.

We live in a world of our own choosing, in which our whole concept of being exists on our ability to be commercial.

It is about the economic role model that brought about the birth of our world as we know it today. Those who aim to deceive always come undone in the end and in that context we could choose to see Alexia Sinclair’s avocacy of Rococo imagery as not only about visions of great beauty, but also as a cautionary tale as well.

Watch the Trailer about its Creation