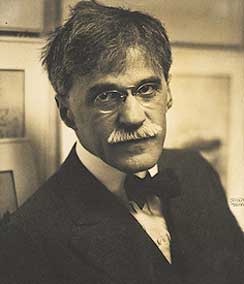 Alfred Steiglitz, (1864-1946) is often called the father of modern photography, because of his commitment to having photography recognized as an art form. Camera Work was one of the greatest accomplishments of Steiglitz in his mission to bring the level of photographic art in the United States up to the level of work being produced in England and Europe. After leaving The Camera Club, New York and the editor’s position of Camera Notes in 1903, Steiglitz pulled together the leading photographers of the day and formed a new organization called the Photo-Secession. He exhibited members photographs at his gallery, “291”, and published their photographs in his own magazine, which he called Camera Work. An exhibition at Buffalo in 1910 set an aesthetic credo insisting photographs look like photographs and separating photography from other fine arts such as painting, defining photography as a fine art for the first time. He became fascinated with, and in 1924 married artist Georgia O’Keefe (1887 – 1986), famous for her magnified portrayal of flowers. She became Stieglitz’s icon for the authentic American-born modernist painter. 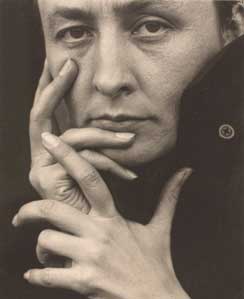 He was captivated by the allure of her powerful physical presence. His images of her are frank portraits of a very strong individual.