This year she has joined forces with Set Designer Tony Assness (lauded for his party scenes in the ‘Great Gatsby’) and much in demand Australian fashion designer Alistair Trung, for an interpretation of Iphigénie en Tauride by Christoph Willibald Gluck, a classical French opera.

When self described “theatre animal” Trung found himself with the opportunity to create costumes for this production, he must have been in seventh heaven.

A graduate of the University of Technology at Sydney with an honours degree in fashion and textile design, Alistair Trung is a master of the drape.

The success of his garments is in his ability to fashion fabrics that are rare, like some of his current silks, which are hammered to simulate shining sensuous leather.

He enjoys the exotic, but creates his own kind of ‘opulent minimalism’, retaining a personal connection at all times to his work. From the preview of his designs created especially for the show it is easy to see that the right elements have come together, a type of creative alchemy.

From the incredibly dark mad king dressed in textural black, that Alistair describes himself as being part Gaddafi, part Bhutto with all the power of the condor.

And from that majestic yet menacing bird of prey, to the kabuki like chorus in rich burgundy, he creates a somber vibe.

It is easy to see that Trung, who is an independent label with five boutiques in Sydney and Melbourne, is as excited by this collaboration as the opera company are. Recently I was invited along to the Pinchgut Opera to meet Alistair Trung in their new studio at Opera Australia headquarters in Sydney. 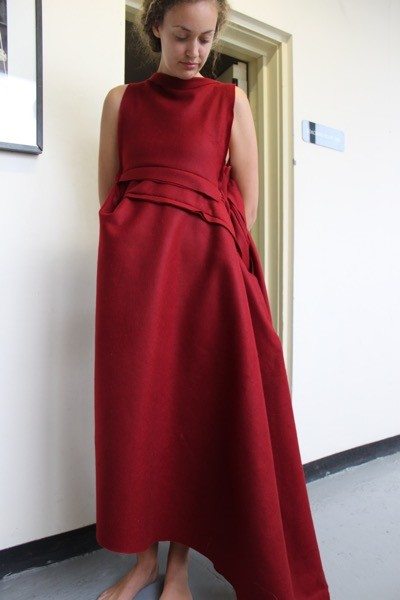 His philosophy of style demands that his clothes become integral to their way of life; in this case as a foil for the performers on stage to evoke memorable images in a taut drama that has noble aims.

You certainly gain that impression from the fabulous garment he was completing the fitting for while I was there.

The garment had a sense of purpose and provided the dashing baritone Christopher Richardson with an air of power and influence.

Just watching Trung make adjustments to his work, one can sense the connection he has with fabric.

A natural affinity is definitely present. The fabrics are heavy, so is the mood.

He has captured all the tension of the Trojan war, the basis for this Greek tragedy.

The colours of blood, the underworld and the sea all used to perfection.

Trung has also managed to capture the tension in the fitting of the garments.

He has manipulated the cloth beautifully, and this in turn gives the performers a second skin, if you will, to inhabit.

The emotionally raw story is portrayed in the raw edges of fabric and heaviness of layers. He uses the language of dress to propel the story further, showing that the power of cloth is certainly a potent force.

This will aid the dramatic telling of the story. This year’s December season of the Pinchgut Opera offers a stellar cast, including soprano Caitlin Hulcup, tenor Christopher Saunders, and baritones Grant Doyle and Christopher Richardson,  supported by the stunning Orchestra of the Antipodes who play on period instruments.

Performed in the acoustically stunning recital hall at Angel Place, Iphigénie en Tauride promises to be a special event for Pinchgut followers and lovers of performance art, arguably one of the best yet.

For Alistair Trung it is another aspect of his journey in design and an evolution of his philosophy of extending himself ‘beyond the fashion paradigm’.

Artfully conceived and created it will be truly a season where music and design meet the threads of our society to both inspire and uplift. A new year and a new shade for Pantone’s colour of 2015, Marsala. It is interesting how colour can reflect the mood of society, how the general hoi polloi view their world. Why do certain shades feel “oh so right” for the times? Last year Radiant Orchid was the go…