Autumn started with a bang at Melbourne in Victoria this morning with a wailing wind, scudding clouds, sweeping showers and sunshine all at once. Walking alongside the River Yarra rugged up was indeed refreshing, as the temperature hovered around a chilly 13 degrees. Rowers and their coaches certainly dominate the early morning scene. Rower learners seemingly glide effortlessly along in their sculls, their oars dipping and driving them through the water, while their coaches race along the pathway on bikes with loud hailers calling out instructions. 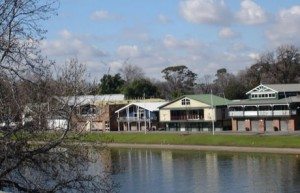 The rowing tradition, which grew out of rivalry between universities, has gone on for over a century now, with many famous rowing clubs sited near the city and St Kilda Road at the doorstep of Flinders Street Station and Southgate Arts and Leisure Precinct.

If you are a walker you have to keep your wits about you or its more than likely you will get run down. Walkers are either alone, with a friend or there is a great many now with a baby in a carriage in tow. They are equipped for the weather, with protective clear coats and wheels for walking and jogging. The whole area is a busy friendly place with salutations exchanged as people, heading for morning refreshment at the Cafe in the Botanical Gardens, pass through the great iron gates overhung by simply splendid trees. At least they understand what a shade tree is in this city.

All around the Yarra deciduous trees make traversing footpaths and byways a pleasant experience. In summer they vibrate with rich green colour, form, light and texture. And they keep everyone cool. None are more appealing than those arching gracefully over the tan pathway, which passes by the gardens where you can occasionally catch a glimpse of a delightful Greek column or a pavilion or two through the trees of this fabulous green space.

In the weeks ahead, it will be a joy to watch as their leaves change colour and then falling as a lush carpet to cover the ground and allow the weaker sunlight of winter to warm the passers by. Under the auspices of gardener William Kent the irregularity of English gardens in their quest for nature and an ideal landscape gradually evolved throughout the eighteenth and early nineteenth century in England, Europe and Australia. They developed into twisting paths creeping around natural looking lakes or alongside rivers with banks and glades. This is the period where the impetus of the gardening evolution switched from the private to the public domain.

English eighteenth century landscape genius Capability Brown, a pupil of Kent’s, had understood that shade trees created patterns of light and shade as well as give distance and dimension to a walkway. He designed perimeter walks with an outer ring of screening trees and they became a distinguishing hallmark of the English landscape style, which was much copied here in Australia well into the 20th century. Characteristics of English garden design styles were re-interpreted, distilled and decanted into something quite unique at Melbourne in Australia. Since an intrinsic part of eighteenth century life had been imagination and wit, it is not surprising they were handsomely, exotically and amusingly embellished.

Temples, obelisks, fountains, statues and other emblematic devices became part of Melbourne’s public park iconography, commemorating people and events.Trees were planted, a temple column or pavilion added, and European and Oriental styles mixed in with equanimity. With the freedom to introduce sinuous forms in ground plans and decoration came the freedom to experiment with new ideas. In the nineteenth century in Melbourne parks were regarded first and foremost as ‘enclosures of pasture with broad well formed walks and drives intersecting and sweeping round the whole together with trees planted on a scale comparable to woods’.

It was important to have a goodly prospect…of hills and dales and woods and lawns and spires…and glittering stream. Public parks did not have the focus of a mansion, but they were gated, fenced and guarded by lodges. Their vastness became a refuge from the outside world and its realities.  And, from being the prerogative of  the nobility, parks and gardens became pastimes of pleasure for all people. Here at Melbourne, where the climate creates four full seasons, laying out parks and planting trees developed into an art form. Today with many well over a hundred years old, it is the cities trees that are among its greatest assets.

Aaah, along the Yarra at Melbourne in autumn…rowers, coaches, bicycle riders, walkers and me