Amanda Muggleton in The Book Club

Life in the suburbs is back in the spotlight where joining a book club is a fashionable and ‘cool’ thing to do.

“We are such stuff as dreams are made on, and our little life is rounded with sleep”, in a place where we can ponder the journey that a well-written book can take us on” Amanda Muggleton in The Book Club, photo by Casey Wong

It may also be better than visiting your therapist, especially as presented by acclaimed Sydney actor Amanda Muggleton, with laughter and having fun on the agenda.

She recently presented her latest tour de fabulous, The Book Club at The Melbourne Theatre Company in Melbourne and it’s playing at the King’s Head Theatre, London, October 11 to November 5, 2016.

Joining a book club could be viewed as engaging in an almost noble pursuit, one that has literary excellence as its goal. On the other hand it can also be about gossip, guilt, infidelity and even adultery.

Book clubs after all are all full of frail human beings, wanting to make new friends and to make contact with other like-minded souls, with whom they can share their enthusiasms. Amanda Muggleton up close and personal offers an astonishingly bravura performance, one that calls on her to embrace not only all her fears but also reveal all her frailties, warts and all.

The Book Club is honest, full of energy and enthusiasm as intimately played out to an audience in the ‘round’. There really isn’t anyone else that I could possibly imagine in this challenging and courageous role.

This is a wondrous show, directed by Nadia Tass, which has an an appealing set by Shaun Gurto. It has been adapted from a longer script by Roger Leighton Hall (b.1939-) one of New Zealand’s most renowned playwrights, with many clever ‘social media’ additions. The Brits in the wake of Brexit, will no doubt not only enjoy the diversion of Amanda Muggleton’s The Book Club.  They may also be inspired to start a few more book clubs of their own, although with all-new Oz style rules of engagement.

From Shakespeare on a Twelfth Night, to the genius of Jane Austen and Leo Tolstoy and from Harper Lee to JK Rowling’s Harry Potter, joining a book club can be about expanding the intellect. It’s also for some one like our heroine Deborah, about ‘conversing between wines’.

Amanda Muggleton colourfully introduces them all to us as Deborah, the bored housewife who spends her days fantasizing over meeting Mr. Darcy. Her daughters we discover are all grown up now, while Walter, her lawyer husband, is lately far more obsessed with sport than his wife. Amanda Muggleton in The Book Club

So she joins her friend Trish’s Book Club to not only add a bit of spice to her daily routine, but also to expand her horizons, which Deborah soon finds out, turn out to be unlimited.

The amazing book club Deb joins is chock a block full of mesmerizing characters, scaringly, many of whom you will recognise.

Amanda Muggleton wonderfully plays all the participants in this marvelous farce, and you will find yourself quite attached to this motley crew after the non stop ninety minutes of her truly outstanding performance.

Trish, the club’s convenor struggles valiantly to keep her group interested. From Wales there is the delightful Millie, honest as the day is long and able to pronounce long place names like Llanfairpwllgwyngyll in a single stride. Then there is the pregnant Caroline, who edits favoured women’s magazines and gives birth to a beguiling boy, who looks a bit like politician Barnaby Joyce. He loves fastening himself onto his mother’s bouncing boob.

Steffi the seductress preys on anyone wearing pants, while the most marvelous of all is perhaps Meredith, the snob who subscribes to the idea it was only the literary elite that read Jane Austen’s novels.

Deborah gets fit by walking on her husband’s treadmill, which is now taking pride of place in their living room. Interestingly, you find yourself becoming both engaged and excited as Deborah provides us with plenty of gossip and scandal, as well as relates truly thrilling stories. Amanda Muggleton in The Book Club, photo by Thomas Blunt

Amanda Muggleton’s character impersonations pinch many nerves. She is erudite, convincing and completely believable, making you think about your own totally dysfunctional friends and family.

It’s embarrassing to recognise so much of yourself in each character she portrays. Their stories under discussion have the ability to transport us all, taking us on a journey that can be inspiring, cathartic and meaningful, while wonderfully fun, frivolous and foolhardy.

They can also help inspire and change your perspective on life. Well, perhaps that’s what we are meant to think. However, thinking often doesn’t come into it! And while you are taking time out to think, please watch your step, don’t fall over the dog!

When romantic fantasy takes over Meredith will soon find herself rubbing shoulders with Athena from Greece, whose English pronunciations have everyone rolling in the aisles.

Having the time of her life while attending, Deborah finally finds herself hosting her fabulous friend Trish’s posh and popular monthly book club meeting at her own home. 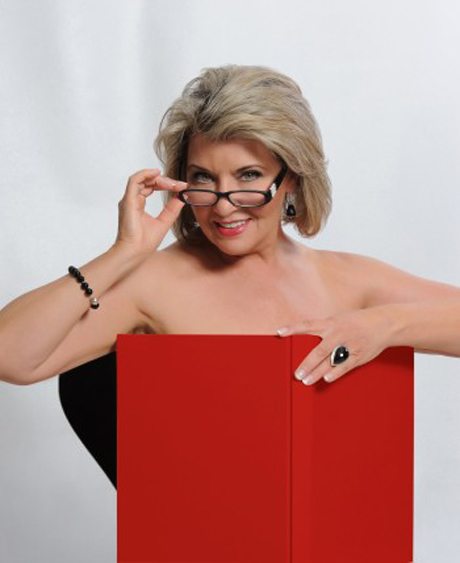 She decides to choose an ‘Australian book’ and invite along a guest writer. Astonished when he accepts, she is fascinated by his attitude and tempted to explore their meeting yet further.

She also wants to find out if he is as bored as she is, especially after she discovers his wife Fern has moved out.

After wrestling with herself and exploring her own moral stance for a while, Deborah ultimately gives in.

Amanda Muggleton having sex from both male and female viewpoints requires a virtuoso display of stamina.

During her prolonged bonking sessions Deborah gives it her all and shamefully perhaps, we enjoy them too! Shocking!!!

As an actor Amanda Muggleton has enjoyed a career spanning more than four decades in Australia and has more than fifty theatre, film and television credits to her name. Her brilliantly realised consummate and very poignant performance in The Book Club, is perfectly punctuated with pathos; that interior universe to which we are all drawn, attracted by its complexities and contradictions, implying something more than just simple emotion.

Ramping up moments of passion and sexual tension, watching her perform can be quite cathartic. It’s a bit like discovering a woman wearing a flaming red petticoat under her very severe little black dress and then secretly pinning up the hem behind her back for everyone to see.

The audience were all as delighted as we were, judging by they’re willing participation and rousing acclamation. The Culture Concept Circle’s Deputy Editor Belinda and I went together. We agreed London is sure to take the play, its characters, and most particularly the virtuoso performance of Australian actor Amanda Muggleton, to its heart.

We gave The Book Club five out of five golden stars – we dearly wanted to join!

The Book Club
by Roger Hall

The magnificent thirteen metre gold and ivory statue of Zeus was found inside his temple at Olympia on a throne described by a contemporary ‘as an elaborate structure of cedar wood, laid in with ebony and richly adorned with valuable stones and sculptures’. His figure required so much ivory Philo…