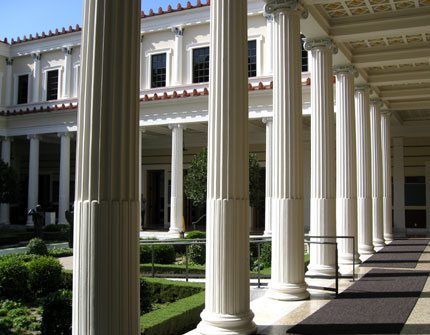 The patricians of Ancient Rome first established villa culture in a desire to enjoy the coveted and perceived pleasures of country life. Romans were intelligent gatherers of other people’s ideas and so they enlarged the Greek peristyle house, into a dwelling that reached the height of its popularity during the later republican period.

The layout, arrangement and progression of rooms in a Roman Domus (house) were very important and, carefully thought out.

Just as the temple was related to its sanctuary as a whole, and to the sphere of influence of the divinity dwelling within it, so the Roman Domus was characterized by its axiality, or domination of the central courtyard by the principal room and the relationship to its space. 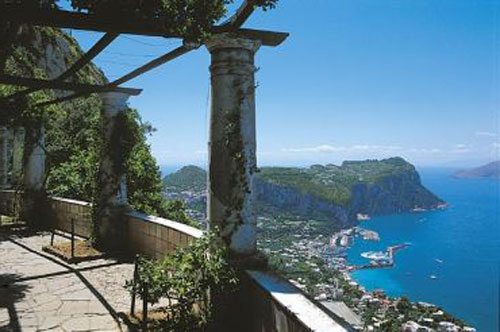 The architecture of a villa broke with traditional layout and its interior spaces were adapted to a more informal and leisurely lifestyle, which included being involved in agricultural pursuits.

They always took advantage of the topography of their site.

Those villas disposed dramatically along cliff tops near Naples and other rocky mountainous areas close to the sea were often built over many levels, following the natural contours of the land.

This allowed for all sorts of extra features like a grotto or a cellar for storage beneath, as well as spectacular gardens overlooking the sea. Generally the door in the middle of the façade of a villa opened into a short corridor, which led into a courtyard open to the sky called the Atrium.

This was the first space confronted when the visitor entered. It was partly covered allowing light and air to penetrate while remaining cool and the central focus of domestic life.

High ceilings, pierced by a square or rectangular aperture, were open to the sky, which admitted not only light but also rain as well. Because it was a precious resource water was collected in a central pool and while useful, was also symbolic as it was the source of all life.

A most important feature near the entrance was the Lararium, which contained a shrine dedicated to the Lares, the household gods who protected the family. Food and libations were placed in front of their images and alongside were kept wax ancestor portraits.

The Tablinum was separated from the Atrium usually by an array of Corinthian style columns or half columns (pilasters) and had retractable doors or portieres (textile hangings), that were draped from these columns to be drawn at will.

This cool airy chamber was often used as a dining room. However as houses grew larger, more frequently they were used simply as a reception area. If it was possible the all important vista ran from the front door through the centre of the Atrium all the way through to an architectural form or feature at the rear strategically placed to catch the eye of callers at the entrance door.

The Peristyle was at the heart of every wealthy residence. To reach it you passed through a series of open spaces; a covered courtyard, an open courtyard with a portico and a garden with fountains.

It was generally accessible directly from the vestibule and served as a complement to the rooms arranged around its perimeter.

The amount of space not being utilized was directly relevant to the social standing of the owner of the house.

Unused space, then as it is in many cities of the world today, was considered a luxury.

Painted decoration and mosaic floor in the Cubiculum at Boscoreale

So the more there was, the richer the occupant was perceived to be.

The visitor could not fail to be impressed if the peristyle was large and it would have immediately informed him, indirectly, that the occupant was not a plebian (ordinary), but an aristocrat (special). 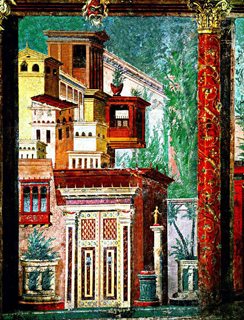 Fresco from the Villa at Boscoreale

Interior decoration was an essential ingredient in the Roman life style transforming and enhancing their living environment.

By using the art of perspective in painting they enlarged the physical space within a room. In some instances they achieved this by offering a glimpse of the sky or, by opening a window into a mythical world the decoration seeming to break through the bounds of the wall.

Another role of interior decoration was to turn parts of the house into picture galleries and just as we collect paintings and prints old masters, they collected reproductions of Greek old masters and illustrated stories about Alexander the Great, which held deep moral meanings and lessons about life.

The unroofed area of the Peristyle allowed light into surrounding chambers, which were flexibly used for bedrooms, offices, storerooms, small dining or banqueting rooms.

Practically every Peristyle of any size was embellished with fountains. When it came to bringing water and plants into the heart of the house the owner had a wide range of possibilities. He might opt for a single basin with a few potted plants.

Or, he might turn his entire courtyard into a garden with fountains or a watery fantasy upon which one gazed, but did not enter.

The charm of such a space enhanced the private lives of the residents. And, its magnificent décor conveyed to visitor’s the owner’s high status. Embellished by a combination of architectural and natural effects, it was also space in which a variety of activities took place, from solitary pursuits to great receptions.

It provided a workspace for servants with a ready water supply and, as a passageway linked all the main rooms of the house so it was busy and productive.

Classical busts of admired friends or distinguished ancestors were displayed throughout a Roman Domus in deep recesses. 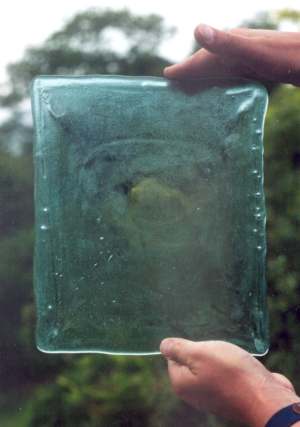 Lighting was very difficult as glass was not readily available before the first century and this is the reason why there were only few and small windows, as the heat also escaped.

Glass only began to be manufactured in large pieces during the first century at Rome and as such, considered for use by architects.

It was an expensive commodity so again, only reached the houses of wealthy aristocrats.

The introduction of window glass did eventually led to a better-lit and more efficiently heated style of housing.

This came about during the reign of Emperor Augustus (63 BCE -19 ACE 14) when brick faced concrete or stucco brought new standards of stability and safety. 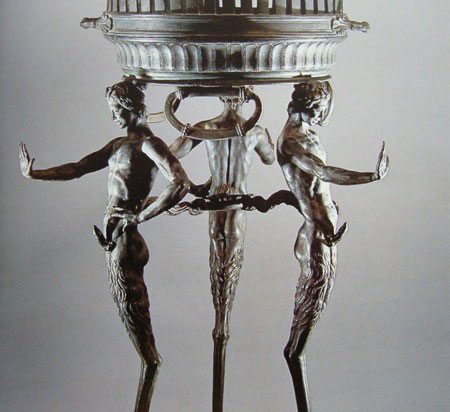 Tripod Brazier from a Villa at Ancient Rome

Social commentator Pliny the Younger’s writings gave full details of the way rooms were designed to catch the sun and one of his descriptions mentioned a bedroom, which had a floor heated by pipes of hot steam.

It circulated at a regulated temperature.

Braziers were used for both warmth and for cooking as there were no purpose built kitchens.

Food was brought from a nearby foodstore and taken home and heated and served.

The modern Mediterranean practice of eating out of doors on hot summer evenings goes back to ancient Roman times.

Sheltered by an awning or by a vine arbor and cushioned by mattresses and pillows the diners would recline on their elbows in the Greek manner.

They would pick tidbits from a central table, or from floating dishes in the form of little boats and water birds.

As night drew on, lamps would be lit in surrounding candelabra that were suspended from the hands of bronze statues.

The diet was generally frugal, even in the grandest homes, and only in cases of great ceremony was haute cuisine employed.

And, if it was provided by the Imperial gastronome M. Gavius Apicus, well then you knew you had it made. Apicus became famous for his sauces and dressings. He also kindly gave his name to various cakes and his Sucking pig a la Frontinus was sensational. The Romans did not invent ornamental gardening. Shrubs and trees had been used by the Greeks to beautify temple precincts and gymnasia. However it was in the Roman period that pleasure gardens became a major facet of the art of fine living.

The term used by Pliny the Elder was opus topiarium derived from the Greek word topia (landscapes). The original aim was to create attractive natural settings and Pliny listed a great variety of gardens as ‘groves, woods, hills, fish pools, canals, rivers, coasts’.

The Romans from the time of Emperor Augustus introduced the artificial element statuary and garden furniture, formal layouts, the shaping of trees and the combination of plants with water display. Trees and plants were cultivated in ornamental gardens and they put the accent on greenery rather than floral displays.

The development of great villa gardens was an extension of the idea of the sacred garden or grove around temple buildings, further influenced by traditions from Persia. View through to Vista in Getty Villa, USA

A Villa in Roman times was the cultural ideal of rural life and in it, surrounded by nature, man could become master of his own destiny.