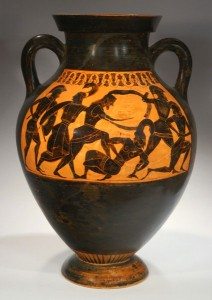 An amphora signed by Exekias around 540BC is seen as the climax of what stylistically called black figure painting. Technically it was difficult and required three phase firing in a kiln. But it is mind boggling when you know that it involved creating the scene with a glossy slip the same colour as its base that only emerged as being black after the vase had finished being fired in the kiln. Corinth and Athens were major centres of pottery production and their painters drew on an inexhaustible source of Greek myths, Greek humour and epic tales for subject matter. At workshops in the Kerameikos quarter of Athens potters and vase painters worked closely together. 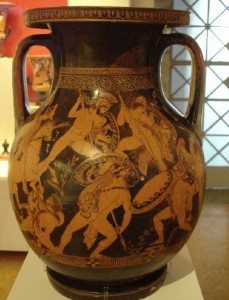 The red figure technique developed around 530BC allowing far greater expression and scope for foreshortening and interior detail. Vases were created by famous potters and painters who signed their works showing they were aware of their own fame and prestige. Put quite simply it was the reverse of the black figure method, the figures ending up red (the natural colour of the clay) against a black background, which was even more difficult. Once established however it allowed far more scope for detail, enabling decoration to have a far greater effect.

Winter at Death’s Hotel ends in a way that Kenneth Cameron can write more about Louisa Conan Doyle and her investigations, a woman I’d like to hear more about