Ancient Egypt Transformed: The Middle Kingdom will be an exhibition displaying objects ranging in size from monumental stone sculptures to delicate examples of jewellery, which will open on October 12 at The Metropolitan Museum of Art (The Met) in New York

Fashioned with great subtlety and sensitivity the exhibition will be drawn from pre-eminent collections within The Met itself, as well as some thirty-seven (37) museums and collections throughout North America and Europe.

Thebes was the ceremonial capital on the West Bank of the Nile and the Egyptian people developed a remarkable knowledge of astronomy, engineering, mathematics and medicine as well as an organised taxation and legal system with a police force and courts.

The great strength of Egyptian culture during the reign of the pharaohs was that religion and life were interchangeable and interdependent in their approach to, and understanding of their existence. They did not seek to separate themselves from their faith, actions or beliefs in their daily occupation. Academics divide the rule of the Pharaoh’s of Ancient Egypt into periods and kingdoms all of which are defined by notable events and periods of great development. Egypt during the Middle Kingdom (c2030-1650 BC) enjoyed a cultural flowering that would last for nearly 400 years. The Met is particularly rich in Middle Kingdom material and this comprehensive survey of its arts and culture is a first, featuring many objects never shown in the U.S.A before.

Nebhepetre Mentuhotep II was the first and founding Pharaoh of the Middle Kingdom, also know as the period of reunification, during which Osiris became the most important of all its deities.

Images of him recorded on the fragments recovered show him wearing the white crown of upper Egypt. His beard is curved, indicating he had joined the ‘ranks of the gods’.

Adela Oppenheim, Curator of Egyptian Art at The Metropolitan Museum of Art noted that “… the works of art in the exhibition will show that ancient Egypt constantly evolved, and was remarkably flexible within a consistent framework. New ideas did not simply replace earlier notions; they were added to what had come before, creating a fascinating society of ever-increasing complexity. Terraced against a cliff it was partially buried under falling debris during an earthquake, the rest destroyed.

Early Middle Kingdom Pharaohs are often depicted with youthful faces and confident expressions contrasting a great deal with the evocative, fleshy faces and deep-set, hooded eyes of later kings, which reflect more on their maturity and humanity.

An assertive figure, Nebhepetre Mentuhotep II was ruler of the southern part of Egypt at first. By the thirty ninth year or his reign, using his might of military power, he had wrested control of the north from the kings at Heracleopolis uniting the country and expanding trade and mining. 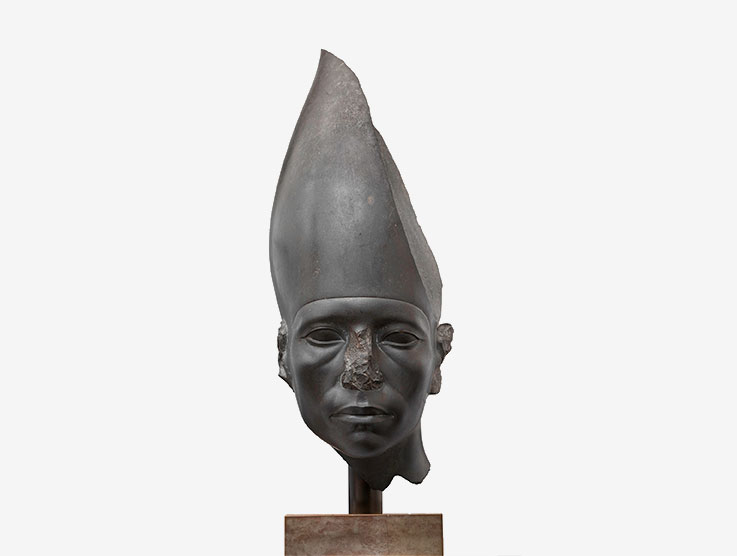 The sculptural art during his and his successor’s reign consisted of the block figure type with the head and torso a focus.

Both men and women had these created, giving an idea that equality was part of the culture of his age in which he had six Queens who were buried behind his tomb. Henhenet, Kemsit, Kawit, Sadeh, Ashayt and Muyet.

Their role in his life was to support his rule as the ‘guarantor of divine order on earth’ and woman had more legal rights during the reign of the pharaohs than in some countries today.

They also wore fine clothing and used a wide range of cosmetics and beauty products.

Four Queens ruled Egypt in their own right with Hatshepsut (foremost of noble women) during the New Kingdom period depicted in many of her statues as the ‘ideal king’. One of my favourite figures from the Middle Kingdom, will be sure to be on display.

The statuette of a Hippopotamus from Dynasty 12 is pure delight. He takes cute to the next level.

Moulded from the type of ceramic material local potters made from ground quartz, he was painted with the outline of river plants, symbolizing the environment in which he lived.

For the Egyptians the Hippopotamus was a formidable animal, one of the most dangerous, who had to be controlled in his lifetime and the next.

Literature too developed from being just for practical use of accounts in daily life and the harvest, to being about storytelling; the story of Sinhue was a notable one produced at this time, along with philosophical works.

The family was the main focus of ancient Egyptian culture, with relatives depicted together on stelae and sculpture, including poignant groupings of mothers and their young children. Model from the tomb of Nebhepetre Mentuhotep II From Deir el-Bahari, Egypt, 11th Dynasty, around 2000 BC, courtesy The British Museum

Food production, manufacturing, and journeys by boat are all displayed in several sections of the exhibition. Bread was the staple diet, the production of grain the most important industry, often illustrated on tomb walls.

Osiris ruler of the Underworld was the God who gained importance during this period, through his cult centre at Abydos.

Annual processions between his temple and supposed burial place in the desert to the west were held. To ensure their own afterlife, individuals at many levels of Middle Kingdom society erected memorial chapels for themselves and families along the route. The general knowledge of the history of the Middle Kingdom including the achievements of its artists, religious beliefs, burial customs, and relationships with other lands stems in part from The Metropolitan Museum of Art sponsorship of numerous excavations at Middle Kingdom sites including Deir el-Bahri (1920–31), Lisht (1906–34, 1984–91), and Dahshur (1990–present).

Related events will take place throughout the exhibition.Adela Oppenheim, Curator of Egyptian Art. “But the works of art in the exhibition will show that ancient Egypt constantly evolved, and was remarkably flexible within a consistent framework. New ideas did not simply replace earlier notions; they were added to what had come before, creating a fascinating society of ever-increasing complexity.”

Ancient Egypt Transformed: The Middle Kingdom is organized by Adela Oppenheim, Curator, and Dorothea Arnold, Curator Emerita, with Dieter Arnold, Curator, and Kei Yamamoto, Research Associate, all of the Department of Egyptian Art. Exhibition design is by Daniel Kershaw, Exhibition Design Manager; graphics are by Mortimer Lebigre, Graphic Designer; and lighting is by Clint Ross Coller and Richard Lichte, Lighting Design Managers, all of the Museum’s Design Department. A fully illustrated catalogue, suitable for scholars and general readers alike, will be published by the Metropolitan Museum and distributed by Yale University Press. The book will be available in the Museum’s book shops

The Mudgee region of New South Wales is Wiradjuri country, with its beautiful bush-walk The Drip and age old stencils of hands on rock made by indigenous people