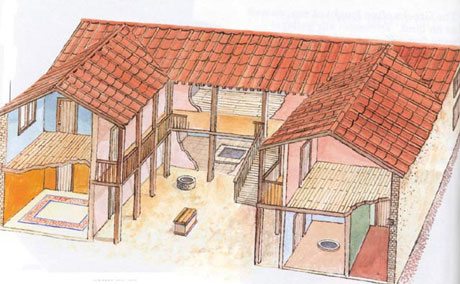 No other ancient people were so dynamic and so creative as the Ancient Greeks. Their citizens enjoyed architecture, paintings, sculptures, metalwork and pottery of unparalleled brilliance and sophistication. For many centuries the domus (house) played only a marginal role in the everyday life of the Greeks, providing shelter.

Just like here in Australia, and particularly in Queensland, many activities, whether work or leisure took place outdoors. Greek houses evolved from the Archaic period from primitive to basic, emerging in the second half of the 5th century with more attention to function and comfort. Urban planning emerged in the second half of the fifth century before the Christ event and styles changed. Builders paid far more attention to the function and comfort of domestic space, which is perhaps an early sign of a more individualistic approach to life. The most common floor plan of a Greek house consisted of rooms ranged around a courtyard with at least one arcaded side. It evolved through the centuries from a humble shelter to a small private castle of law abiding citizens, who were self-satisfied with themselves and the solid walls of their home. For many they were a modest showcase for a lifestyle in which appearances mattered.

A Greek peristyle garden constructed on the island of Delos in the second century before the Christ event was luxuriant with plants and watered by ingenious lead pipes hidden from sight. This garden would become very important to the future of ornamental gardening and the development of a Roman Villa over the next hundred years At this time the Greek house reached the apex of its development as a Peristyle house. That meant its rooms were arranged around a central courtyard with at least one arcaded side, and in wealthier houses, on three sides. We know the Greeks enjoyed their gardens, which is evidenced in passages of Homer’s Iliad ‘As when the north wind of autumn suddenly makes dry. A garden freshly watered and makes glad the man who is tending it.’ The ancient Greeks described the Rose as the “Queen of Flowers” and while used for medicants it was also valued for its beautiful aesthetic.

The ancient Greeks intertwined aromatic herbs with colourful blooms. We know that from six centuries before the Christ event there were commercial nurseries and that fragrant flowers were placed on graves where the scent was regarded as a sign of the transfiguration of the deceased.