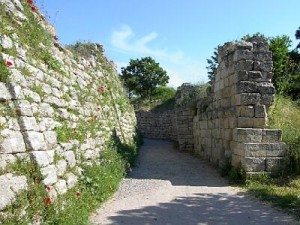 Ancient Troy was once a mythical city, known only through the text of the ancient Greek poet Homer’s Iliad. In 1870 German archaeologist Heinrich Schliemann (1822-1890) excavated the ruins of Troy (and several cities above and beneath it) in northwest Turkey. Since then archaeologists have discovered there are ten cities each built on the ruins of the one before it. They believe the seventh city was probably the legendary city. From 1100B.C to 700B.C, no one lived on the site. Some Greek people settled in a small village there in 700B.C. The last city, Troy IX, was built in late 300 B.C. It was called Ilium by the Greeks and Romans and lasted until the year of our Lord 400 when it finally declined. Its discovery gave weight to the idea that the Iliad (The Song of Ilium), which tells of the battles between King Agamemnon and the warrior Achilles some eight centuries before the Christ event, are indeed based in fact.