The yew tree is associated with wisdom and many of them still standing in England have been there for over a 1,000 years. It has always attracted legends, including that of the tree in the Scottish Highlands at Fortingall. It is in fragments, reputedly 1500 – 2000 years old, with the initials P.P., said to, as the local story goes, to have stood for Pontius Pilate whose father was an Imperial official in that area. It is the oldest known tree in Europe. An engraving of 1744 from Pennant’s Tour in Scotland shows this giant yew, with a girth above 55′, already broken into two fragments. An 1822 engraving from J.G.Strutt’s Sylva Britannica reveals the effects of time, weather and souvenir hunters. A wall and railings built around the yew now allow the fragments to grow almost unimpeded, though in 2001 one of them was observed to be growing so vigorously it was beginning to push part of the protecting wall outwards. An old yew has no annual rings and no thick rind to protect it, with the result the heartwood, although immensely durable, eventually decays and they become hollow ending up as a palisade of living fragments. 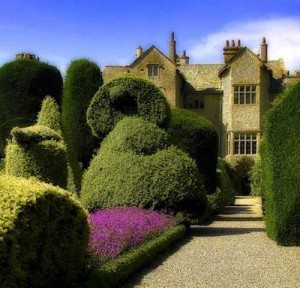 Yews are the best hedging plants, so dense and even textured, one can easily think of it as architecture. Its colour has been deliciously described as the colour of ancient widows’ shawls, and as unkempt and wispy as their hair. It provides a perfect foil for most colours in the  garden and in Spring it has a coppery bloom. Levens Hall in South Cumbria in Northern England has the most important surviving example of topiary yew trees in the world today. Designed by Monsieur Beaumont, gardener to King James II and a reputed pupil of French 17th century garden genius Andre Le Notre, topiary can display great expressiveness, ranging from the solemn and monumental to the cheerfully exuberant.

Noted English architectural historian the late great Sir John Summerson (1904 – 1992) described English Palladianism, as it has become known, as ‘that balanced combination of the useful and the beautiful, or prosperity and good breeding’. What it did do was satisfy the need for a style that encompassed the…