The Memory of Music, is a “memoir of sorts” according to him, where he writes evocatively about how music has shaped his world. He has lovingly layered personal anecdotes across the vast undulating rich landscape of music. There is an inherent beauty and honesty in his work.

Wisdom is poignantly interlaced with music, the process and evolvement of compositions, the transformations of performance, the value of commissions, the serendipity of chance encounters, fortuitous events and unexpected connections.

Andrew Ford is a man of many gifts and talents.

He is a composer, writer and broadcaster, winning awards in all three areas. His compositions include orchestral works, concertos, vocal and choral music, ensemble music, solo instrumental music and radiophonic works. He is the author of Illegal Harmonies, Earth Dances, Try Whistling This, The Sound of Pictures, Composer to Composer and In Defence of Classical Music.

As a highly valued and respected presenter of The Music Show on ABC Radio National Andrew Ford delivers two weekly hour long programs of entertaining conversation and an eclectic collage of musical styles.

In a recent North Sydney Council Writers @ Stanton Library session presented by the Stanton Library and the Constant Reader Bookshop (Crows Nest) Ford fondly reminisced that seven years ago he became a father for the first time.

Cherishing the joy of his new baby daughter triggered a flood of tender memories from his happy childhood.

As he sang to his daughter at the end of her bed, songs from his own childhood began to surface. In those precious moments he relished how the oral tradition of song is perpetuated. He espoused the virtues of parents singing to their young children as “more important than records, radio or television.”

Andrew Ford was born 18 March 1957 in Liverpool and as a youngster was obsessed with the music of the Beetles. This will immediately resonate with fans across the world and now through generations.

The Memory of Music traces Ford’s musical journey as he acquired and expanded his fervour for Beethoven, Brahms, Vaughan Williams, Stockhausen, Birtwistle and Elliot Carter.

His love affair with classical music is intrinsically embedded within his being and his convincing writing confirms this passion. His expression in musical notation, speech and penmanship appears limitless, refreshing and innovative. He delves lovingly and with a contagious optimism into his past to uncover places and people that influenced his perception, understanding and love of a diverse array of musical styles and genres. This has shaped and underpinned his distinctive and highly successful broadcasting style.

“We hear and process music, and certainly understand it, in our own unique way. We make it – or at least remake it – in our heads.” Ford advocates that music is accessible for everyone regardless of expertise or knowledge.

Each individual can develop and build appreciation for musical compositions; the rich tapestry of sounds that evoke emotional responses and glorious stories that await every listener.

Ford’s writing triggers his own musical memories and “one particular moment, an epiphany I suppose you’d call it” for Ford was the chorale finale of Beethoven’s ninth symphony. Ford and his text make real and significant connections with his readers. This judiciously positions the reader and encourages them to make discoveries about how music has impacted their own life story.

The reader’s narratives are enriched by Ford’s capacity to intimately share his journey and inspire dormant musical recollections.

My own epiphany was in my latter teenage years hearing Stravinsky’s The Rite of Spring for the first time. As I listened to the innovation, intensity and frenzy within the composition I was transported intellectually and emotionally. It was an encounter with beauty and aesthetics that took my breath away. 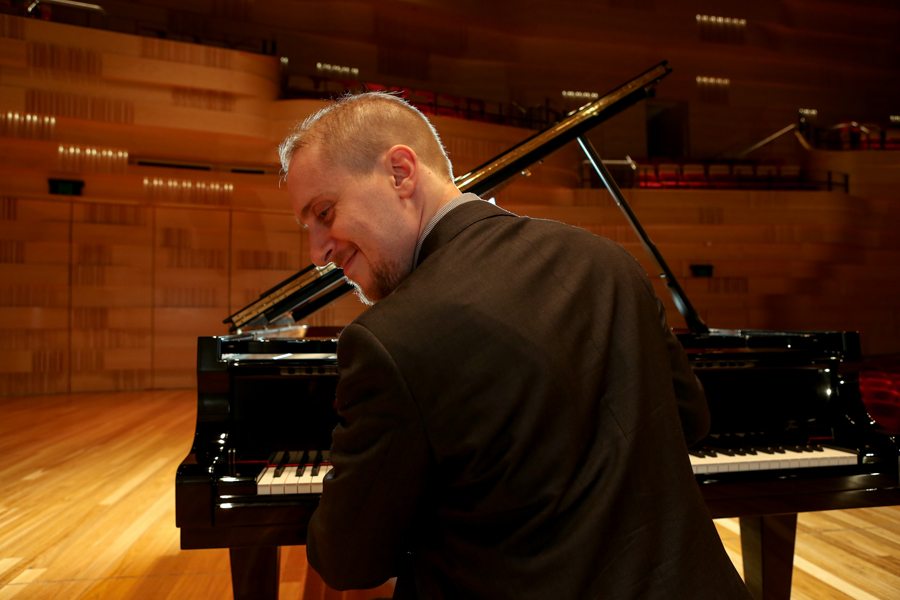 Andrew Ford generously gives the gift of motivating the reader to make their own personal connections. Listening to this music was a moment of self-discovery and it was poignant to be reminded of that precious time so long ago.

Earlier this year I was also stirred by Ford’s composition Headlong at a Sydney Symphony Orchestra concert where the piano playing brilliance of Simon Tedeschi was in full flight.

Headlong was inspired by the word itself. “It immediately suggested a musical form that propelled itself in one direction … it leaves a harmonic vapour trail.” Ford articulated in a Q&A session at his recent talk at Stanton Library. The Memory of Music delves into the background of a composer and provides valuable information about compositions and there contexts, musicians and conductors. The evolution of Ford’s relationship with music and its integration into his life both personally and professionally is intensely moving. His warmth flourishes because he is humble, allows himself to be vulnerable, forever effervescent in his sense of humour and always aspiring to do better. He is wise to emphasise the robust outcomes of giving meaningful words of encouragement and sincere praise.

I felt empowered by Ford’s insightful ideas about the writing process in particular his references to contrasting people’s capacities for the spoken word often differing from their abilities to formulate written thoughts. The truth of this in reverse was also articulated. Talking, writing and composing are very different skills, but Ford is a master of them all. However he believes “it’s easier to write words than music.” It finds you, and you don’t notice it happening. ” Orchestral textures, symphonic overtones, choral blending and solo virtuosity dazzle and meander in the arrangement of this optimistic memoir.

The sets and stunning settings for The King’s Speech take us all back to an epoch when people really knew how to live at every level and had the ready necessary and style to do it. The critics certainly all agree. The King’s Speech is a movie with style to burn and a script of wonderfully witty dialogue that resonates with just the right amount of emotion to draw us in.