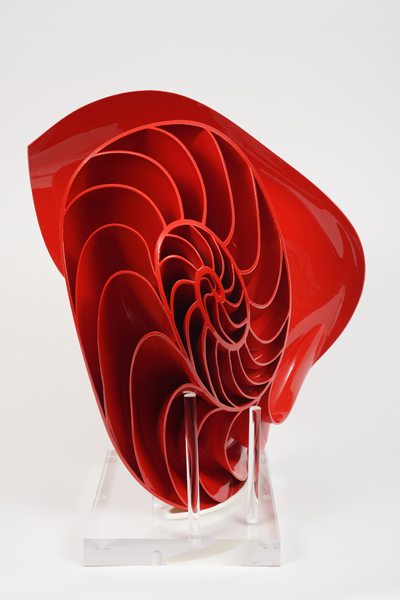 Mossgreen Gallery in Melbourne invites one and all to ‘Come to the Edge‘ and enjoy viewing and perhaps collecting, the recent ‘stainless steel’ works of Australia’s internationally acclaimed artist Andrew Rogers on show 23rd May to 13th June 2015.

Rogers physically works very hard. He has had to invent his own engineering processes to deliver his personal sculptural vision to his high standard of excellence in execution.

His Molten Concept series of wonderful works made from many different materials have for me particular appeal, seemingly inspired by the genius of the Nautilus Shell.

He draws on the hidden numerical code and mathematical certainties, that govern everything on our planet and universe as physics underpins all shapes in nature.

They offer his personal perceptions for us to assess from our own perspective.

Like all great art this happens best by getting up close and personal, and exhibitions like the one at Mossgreen Gallery offers a perfect opportunity for both Melbourne art lovers and visitors to do just that.

Educated at Monash University in Victoria, Andrew Rogers today lives in Melbourne. His art career can be said to have started with a striking Bronze work 2.6 metres high completed in 1996.

While extremely elegant, its form is technically quite difficult and its production marked his transition from figurative to abstract work. 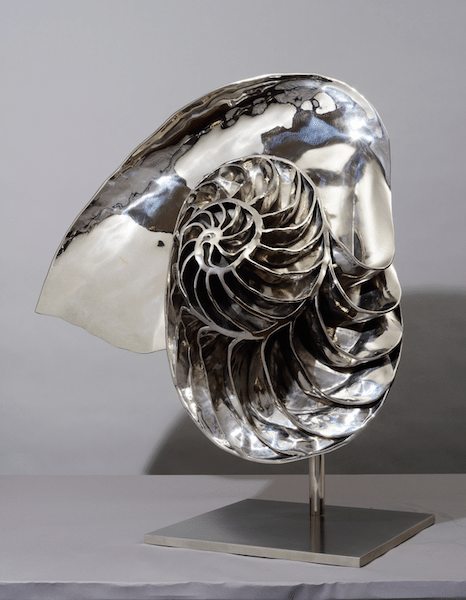 We would have to agree when reading Rogers’s extraordinary chronology of exhibitions, that he has definitely had a distinguished career to date.

First commissioned by Canada’s successful Cirque du Soleil,  the ever flexible artist created “Rhythms of Life”, encompassing all phases of life from birth to demise, including the emotional extremes – love and hate.

At Southbank in Melbourne Rogers installed a larger version of his original work during the same year, which at night is illuminated, expressively providing a comment on city life.

Living in Israel in 1998, he was invited to consider a project in the Avara Desert, with all its challenges of environment.

Rising to the challenge he produced his first Geoglyph, based on two letters from the Jewish Torah, the Hebrew characters for life.

Ultimately he would complete a chain of 51 massive stone sculptures under the Rhythms of Life theme, around the globe, involving over 7,500 people in 16 countries across 7 continents.

All of these have been captured through photography, produced as Silver halide prints mounted on Perspex with some artist proofs available, the editions all limited. 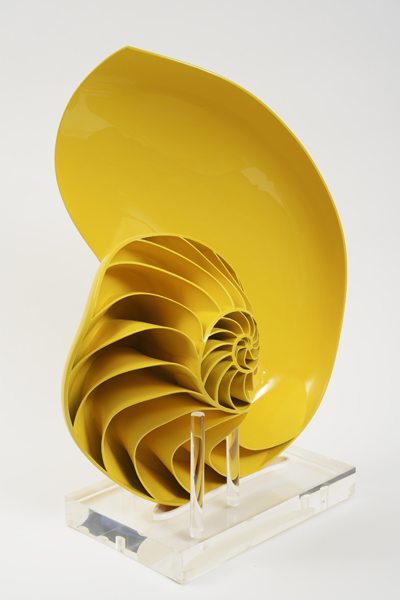 Rogers’s aims to always use a variety of materials in a ‘new and different way’ wanting them ‘convey meaning and portray form in a manner that has not previously been seen’.

His works for this new exhibition to be held soon at Mossgreen Gallery are all finely made from stainless steel…extremely elegant, as well as ‘edgy’.

They perhaps appeal to more optimistic patrons, whom Andrew Rogers aims to engage with their intellect by having them respond to his extremely high level of craftsmanship or both.

He is not restricted by any boundaries as he sets out to create his balanced organic forms, which move on many different planes and angles.

They help to fulfill his passion and love for both geometry and nature.

His forms relate intrinsically and directly to the ‘golden mean’ of measurements also used by the ancients on the Acropolis, in the buildings of ancient Rome and all over the world following the Renaissance era and reflected in both sacred and secular architecture.

The dynamic forms twist and turn with movement as they free fall and torturously flow back and forth. They evoke a real sense of vigour and vitality while amazingly embracing and projecting, the opposite emotion of fragility.

Deeply spiritual, sensitive to local cultural traditions, tactile and accessible, Andrew Rogers great land sculptures, forged in his foundry, are monumental not only in size, but also glimmer with glorious intent.

In recent years Andrew Rogers has added colour into his equation, particularly effective on Elements an 11 metre high installation at Green River in Utah, which punctuates the skyline and demands our attention.

He first exhibited works at the 4th Australian Contemporary Art Fair in 1994.

He has received many awards along the way, especially taking part in Sculpture by the Sea in various locations, including Sydney and Denmark.

Personally I respond very much to his impressive and unique Pillars of Witness, 1999 installed at the Holocaust Centre in Elsternwick, Victoria.

It highlighting its façade and providing an entirely thought provoking focus.

Established in 1984 by survivors wanting to create a special place honouring those who had lost their lives in that very ‘dark period’ of history, it’s a powerful statement. The Holocaust Museum offers its supporters and those who wish to endeavour to understand the Jewish perspective, ‘an open forum for debate’. A five metre edition of Andrew Rogers’ ‘Rhythms of Life’ commissioned by Cirque du Soleil for the entrance of their headquarters in Montreal, Canada.

Andrew Rogers works are in a variety of select and very interesting museums world wide, as well as both public and corporate collections nationally and internationally. Mossgreen Gallery invites everyone to take time out and ‘Come to the Edge’ to enjoy a tete a tete while pondering Andrew Rogers many and varied ‘Rhythms of Life’. Poldark, BBC 1’s hit TV series returns for Series 3 at top speed with a pregnant Elizabeth Warleggan (Heida Reed) on a horse that is bolting alongside the cliff