‘There is a sacredness in tears. They are not the mark of weakness, but of power. They speak more eloquently than ten thousand tongues. They are the messengers of overwhelming grief, of deep contrition, and of unspeakable love’* ‘Happy families are all alike; every unhappy family is unhappy in its own way’ is the often-quoted line that begins the story of Anna Karenina, a novel of unparalleled richness and complexity set against a backdrop of Russian high society and its cultural life. It addresses society’s concerns and mores, moral or otherwise during the second half of the nineteenth century.

Author Leo Tolstoy wrote this, one of the great love stories of all time in 1877 during La Belle Époque, the beautiful era, which is well reflected in the sumptuous sets and sublime costumes. Beauty and innovation were important aspects of this landmark era in Europe from c1870 to 1914 when France and its European neighbours were at peace. It was also a time of great political and social contrasts. Art and design flourished and music became accessible to a wider audience than ever before. In Paris the Cabaret and Can Can thrived and a new style of painting, whose deft brushstrokes amd lively colors emphasized light in all its changing qualities, left lasting impressions. 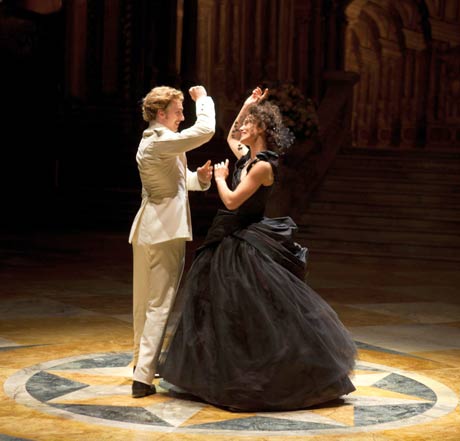 Tolstoy sweeps us along within the course of what is a mighty and doomed love affair between Anna, a beautiful and married society woman and Count Vronsky, a wealthy army officer. It is an epic journey of the heart and soul, one that ends in a dramatic scene of tragedy.

Tolstoy doesn’t fall into the trap of being judgmental but rather allows the voyeur an opportunity to consider the underlying message of his tale about how attempting to build happiness on another person’s pain can, in the long term turn out to be destructive. 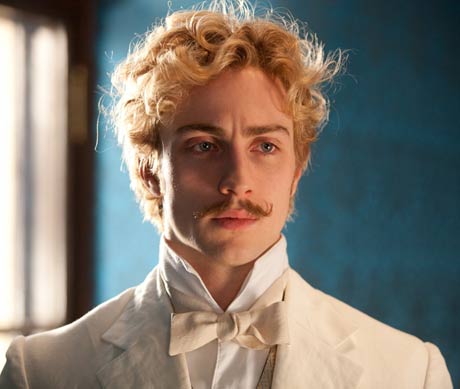 Keep a hanky handy when you take in the new movie, for which the brilliant British playwright Tom Stoppard (Shakespeare in Love) has written the screenplay.

Tolstoy’s masterpiece in film features indomitable British actress Keira Knightly as the Russian aristocratic Anna Arkadyevna Karenina, who is heading up and leading a wonderful ensemble cast. This includes Jude Law as her hard-hearted husband and senior statesman Count Alexei Alexandrovich Karenin, who is not only 20 years her senior but also considered by his peers as a ‘saint’.

Living with one she finds out is not what one would expect.

Then there is Aaron Taylor-Johnson the rich good looking loose-living and very dashing cavalry officer Count Alexei Kirillovich Vronsky, whom she first meets on a railway station something she views as a ‘bad omen’. 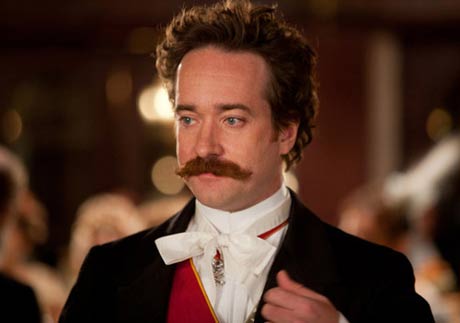 Their encounter at a society ball, where against her better judgment, she enters into a life-changing affair with him, is an emotionally charged and sensuous scene that is deeply felt.

Spooks hearthrob Matthew Macfadyen is Anna’s brother Prince Stepan “Stiva” Arkadyevich Oblongsky. It is because of his troubles with his wife, played by Kelly McDonald, that Anna has come from St Petersburg to Moscow and placed herself in harm’s way.

Vronsky pursues Anna relentlessly after becoming completely infatuated with her (these days we would call it stalking).

Being a dutiful wife she initially resists his many charms but sadly succumbs, falling passionately in love, sealing what would inevitably be her fate, death. 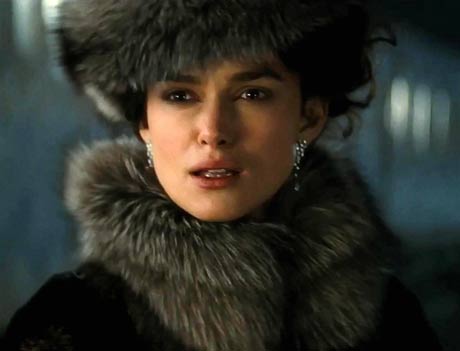 Their torrid affair sets in motion a chain of events that leads eventually not only to her downfall in society, but also has a great affect on the lives of dozens of those people who live and work within her circle.

The pair treads this tawdry path to tragedy together by evoking a love so strong that only those who experience it are prepared to die for it.

Here is a woman prepared to give up everything; her position in society, her only child and her marriage for love and then finds she is not really prepared to endure the consequences of her actions.

Director Joe Wright, whose parents founded the ‘Little Angel Theatre’ in Islington in 1961, had his first foray into film with the period drama Pride and Prejudice (2005) starring the Keira Knightly and Matthew Macfadyen. In 2007 Wright became the youngest director in history to have a film open the Venice Film Festival. His movie Atonement was a considerable achievement. 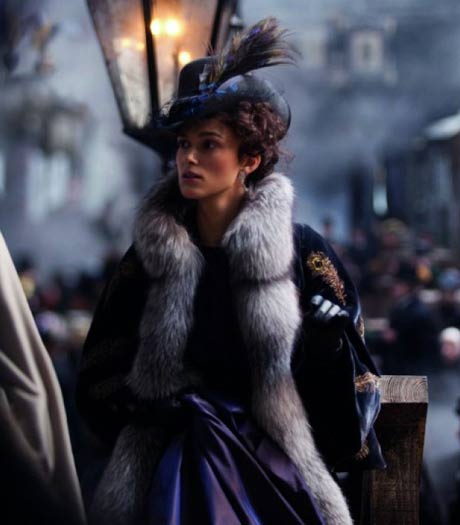 Keira Knightly has gained for herself an outstanding reputation as an actress since her movie debut in 1995 aged 10 years.

Since then she has been in countless period dramas, adventure movies, romantic comedies, psychological thrillers, science fiction stories earing a great deal of respect and admiration for both the diversity of her style and dedication to her craft.

Wright is quoted as having said about Anna Karenina ‘If there was a scene in the book about love it was in, and if it wasn’t about love it was out… I’m not a religious man, but I do aspire to some kind of spirituality and I think probably the best way to find that is through love.

Early rushes revealed that Wright, who grew up within the theatre, uses its raw real power in this production by engaging the audience first with a scene or actors performing the play as part of a stage production, which then moves out into the real world where we all get caught up in the magnificence of the setting, the costumes and the people.

Author Count Leo Tolstoy (1828–1910) was born in central Russia and after serving in the Crimean War (1853-1856), retired to his estate and devoted himself to writing, farming, and raising a large family.

His novels and outspoken social polemics brought him international fame and much literary acclaim.

Anna Karenina the novel is currently enjoying a revival in popularity, as demonstrated by a recent poll of 125 contemporary authors by J. Peder Zane, published in 2007. It was not only in “The Top Ten” in Time magazine but placed at number one, billed as ‘the greatest novel ever written’.