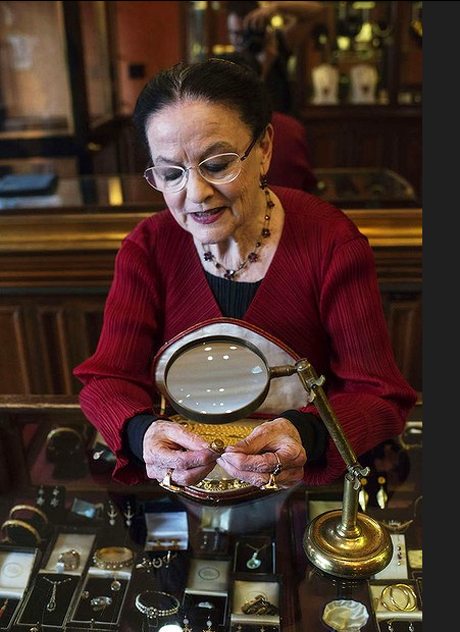 How delighted I was when a catalogue of fine antique jewellery from Anne Schofield Antiques of Woollahra in Sydney turned up on December 1, heralding only 24 days until Christmas 2015.

Throughout history gems have been prized for their rarity and allure, treasured for their matchless beauty, as well as their perceived mystical and curative powers.

The Romans of the 1st century loved emeralds and I must say they have always been my most favourite of all the gemstones, with their rich hues synonymous with the colour green.

They have been used for adornment, investment, as symbols of power, political weapons, or given out of sentiment to a loved one or to mark a sentiment or occasion.

Anne Schofield is a Member of the Society of Jewellery Historians, a Life Fellow and Honorary Associate of the Powerhouse Museum, Sydney, and Approved Valuer for the Australian Government’s Cultural Gifts Program and one of the founding Members of the Australian Antique & Art Dealers Association (AA&ADA).

She is also co-curator of the exhibition A Fine Possession at the Powerhouse Museum, Sydney until May 2016. I must say that I have always had a particular fondness for English 18th and early 19th century jewellery made during the so-called ‘Georgian period (1714 – 1830).

There are some very special pieces made before technically ‘brilliant’ cuts were invented for gems we admire.

When rare pieces from this period do turn up they woo us all with their restrained beauty and charm.

On the front red Xmas cover of the catalogue is a truly divine gold mounted emerald paste necklace with cruciform detachable brooch pendant, plus a stunning pair of ear pendants en suite dating from 1830.

While the ear pendants are truly ‘Roman’ in style the necklace is a riviere, a single strand of coloured stones of the same general size and cut, very popular at the time. As this suite is made from ‘Emerald paste’ that means the stones have been made to look like emeralds, but are not the real thing.

Now this can be a good thing.

It generally means there was an original that the owner had copied with the real deal locked away in a bank vault somewhere for safekeeping.

Today this also means, that with the vagaries of fashion and society most originals are now no more, having been broken down, re-set or sold off in various forms over the centuries since.

All that remains from their age is the ‘paste’ copy to show us what sort of settings and styles the ladies in society preferred and today those copies of the original have achieved an investment value of their own.

The brilliant cut was invented during the eighteenth century and was meant to increase a stones’ brilliance by minimising the amount of light that escaped through the bottom of it.

They were set in open mounts, although smaller stones or rose diamonds were set in closed mounts for some time.

There is a wonderful ‘air of elegance’ that surrounds English ‘Georgian’ pieces and the catalogue all looks very festive. There is also a lovely butterfly brooch, which is set with old cut diamonds with ruby eyes and made about 1880.

The butterfly is a symbol of the soul and of transformation, representing endurance, change, hope and life.

If you do insist on your emeralds being real Anne Schofield Antiques also has No 28 in the catalogue, an Art Deco diamond and emerald target ring you may like to consider.

During the 20’s and 30’s everyone loved emeralds.

Intense, radiant, beautiful, fine emeralds from every period can be more valuable than diamonds.

Stylistically and because of the quality of their settings and stones, Art Deco ‘look at me’ jewellery is the most highly sought after these days.

Their cost however does make Georgian jewellery, which if you admire elegance and excellence together, as well as enjoy their more ‘laid back’ good taste aesthetic as I do, exceedingly good value.

It was also from this period onward that brilliant cut diamonds began to be set in open mounts, although smaller stones or rose diamonds were set in closed mounts for some time.

They also have a story to tell of interesting days before ‘modernity’ took hold. The nineteenth century is characterised by its spirit of retrospection in the arts.

This was when the range of interest in classicism was wider than had ever before seemed possible, with the growth of so many trades and publishing via the industrial revolution.

There are many wonderful pieces to choose from set with coral, rubies, agate, pearls, diamonds, enamels and gold

Craftsmen of this time employed many magic techniques such as pietra dura, micro mosaics being used to create an image or to record a landscape.

Made in Italy in 1850 and set into 18 carat gold mounts, the pair of stunning earrings Anne Schofield is offering depict bouquets of white flowers, symbolising purity.

On the inside cover of the catalogue is an interesting late Georgian collection of jewellery from 1810.

This includes a butterfly brooch, earrings and heart and cross pendant in its original box.

The pieces are all made of ‘cut steel’.

This was also a very unusual material for jewellery that abounded during the first years of the 19th century.

This was when the wonder material steel was cut and polished as a precious stone.

The technique originated in England and helped to provide a substitute for the more expensive diamond jewellery for the expanding middle classes to enjoy. The real fashion for cameos and intaglios began in Europe and England soon after Napoleon’s Italian campaign of 1796, when cameos were also brought back to France from Italy.

Many of these were of Greek or Roman origin. The difference between a cameo and intaglio is that with one the image stands proud of the stone (cameo) while with the other, the image is incised into the stone (intaglio).

Roman culture historically absorbed and preserved the best of Greek culture and its ideas within a political structure at a time when its influence stretched from York in Britain to Alexandria in Egypt from the Atlantic to the Euphrates Valley.).

In Roman times a cameo was originally a gemstone having layers of different colours (e.g. Sardonyx and Cornelian) carved back to show in high relief the design and background in the same or contrasting colours.

The higher the relief, the earlier it generally is. The Italians excelled in the cutting of cameos and intaglios, which during the 18th century were considered major arts.

Grand Tourists who travelled to Italy at this time brought home many superb cameos and intaglios. They were readily transportable and provided a visual record of their travels. An added bonus was that they could be set into gold frames and worn as jewellery.

Cameos became so popular they were set in all sorts of jewels such as tiaras, necklaces, bracelets and earrings usually mounted in simple gold collets

Napoleon had Roman cameos mounted especially for his own use and for his sister, the very beautiful Paolina Borghese. He also promoted the foundation of a school of gem engraving in Paris.

One intaglio c1790 of Cornelian, a favoured reddish hued stone from Roman times, depicts the God of Merchants Hermes holding a moneybag. These can still be worn as a ring on the hand as in Roman times, or to create a seal for any important document. Beautiful Indian Bride decked out in her glorious jewellery.

An Indian Hindu ‘dowry necklace’ of 22 carat gold is particularly impressive, with its 70 jasmine bud pendants.

It came to the west from the Malabar Coast in South Western India in the days when a woman’s family had to provide many items of material goods to take with her when she married as a reward for the man who had secured her hand.

In law he only retained possession of her dowry as long as he remained married to her. An important status symbol, assembling dowries meant that many families went bankrupt

Anne Schofield relates how “fine workmanship, the variety of design motifs and symbols, and the Indian belief in the amuletic qualities of gems and jewellery” drew her to collect Indian jewellery in the late 90’s.

Some of these are showcased in her most recent book Jewels on Queen (2014).

Interestingly dowries were still an important aspect of marriage during the 50’s in Australia, only dying out gradually over the next two decades, as they have now in India.

Today items like this beautiful necklace are also becoming a rarity and can be only found in such special places as Anne Schofield Antiques.